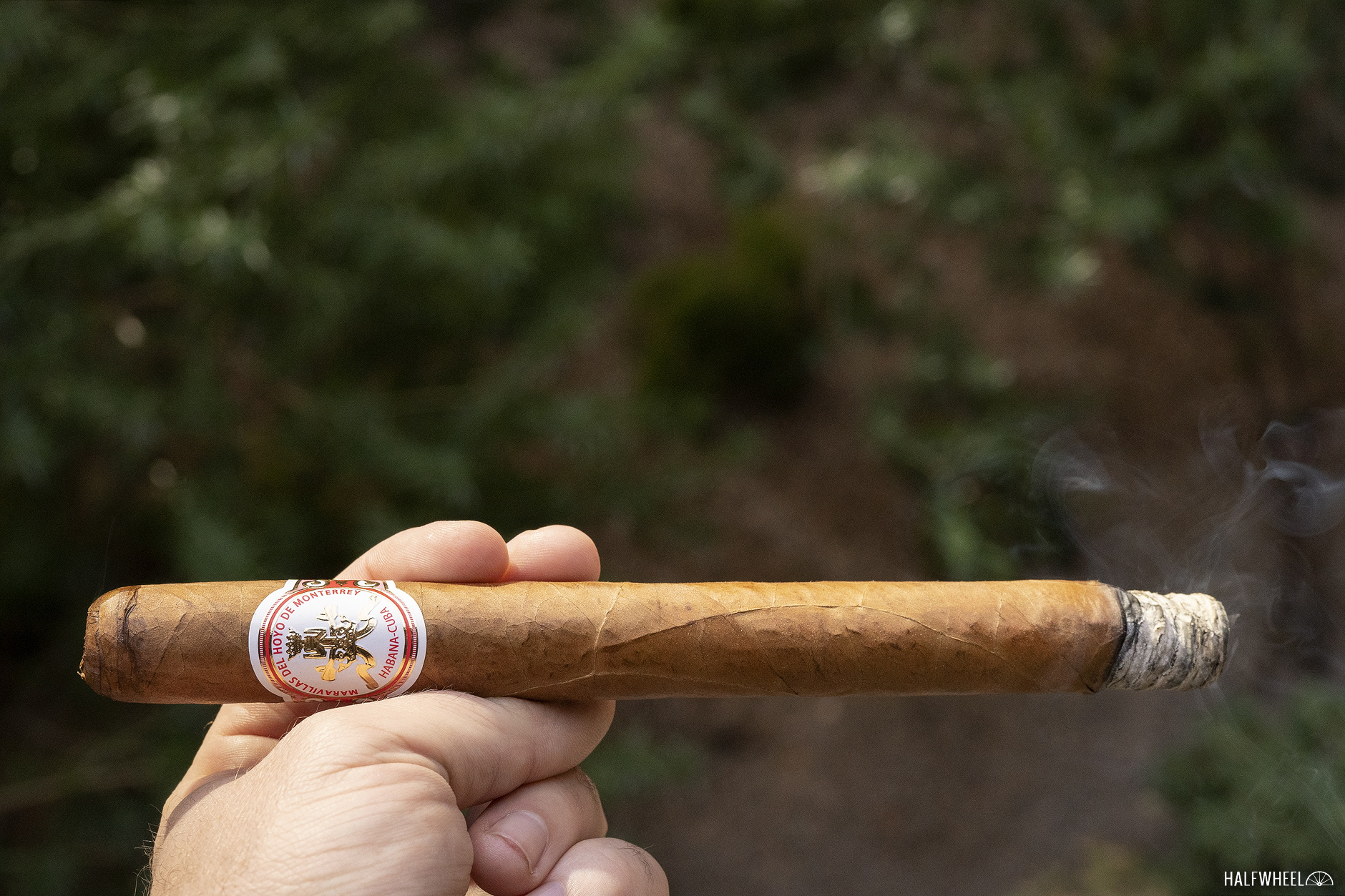 In the world of rare and often expensive Cuban cigar releases, the Gran Reserva and Reserva lines are fairly well known and well documented. But one collection that doesn’t seem to get talked about as much is the Colección Habanos, or Habanos Collection Series, which is best known as being the series that comes packed in a box that looks like a book.

The line debuted in 2001 with the Cuaba Salomónes, and has seen at least one annual release since then, save for 2011, 2014 and 2017 when there weren’t any releases. However, while 2011 didn’t see a new release, it did see a new sampler, with three cigars from the original 10 releases being packaged together in a limited release of 1,000 boxes.

As opposed to the Gran Reserva, Reserva and Edición Limitada releases that contain statements about the tobacco being used, whether it be of a certain age or from a certain crop, the Colección Habanos series doesn’t contain any such statement. Rather, the cigars are known for being bigger than what is generally found in the regular production offerings, in addition to coming in the distinctive packaging.

The word double has made frequent appearances in the size descriptions of the cigars in the series. Scroll through the ever-helpful CubanCigarWebsite.com’s listing and you’ll find double robusto, double pyramid and double perfecto quite frequently.

In the case of this massive 9 1/8 x 55 cigar, the Hoyo de Monterrey Maravillas, a different common name is used for the vitola, and one that is quite fitting: giant robusto.

The Hoyo de Monterrey Maravillas traces its history back to a release that predates the Cuban Revolution; according to CubanCigarWebsite.com, it has been traced to the 1940s, though was discontinued before the Revolution as well. It made a brief reappearance in the late 1960s for London-based retailer Alfred Dunhill.

It returned to the portfolio for the Colección Habanos series, and while it was a 2015 release on paper, it didn’t appear until late 2016. Each book-shaped boîte nature box contained 20 cigars, with 2,000 boxes produced. 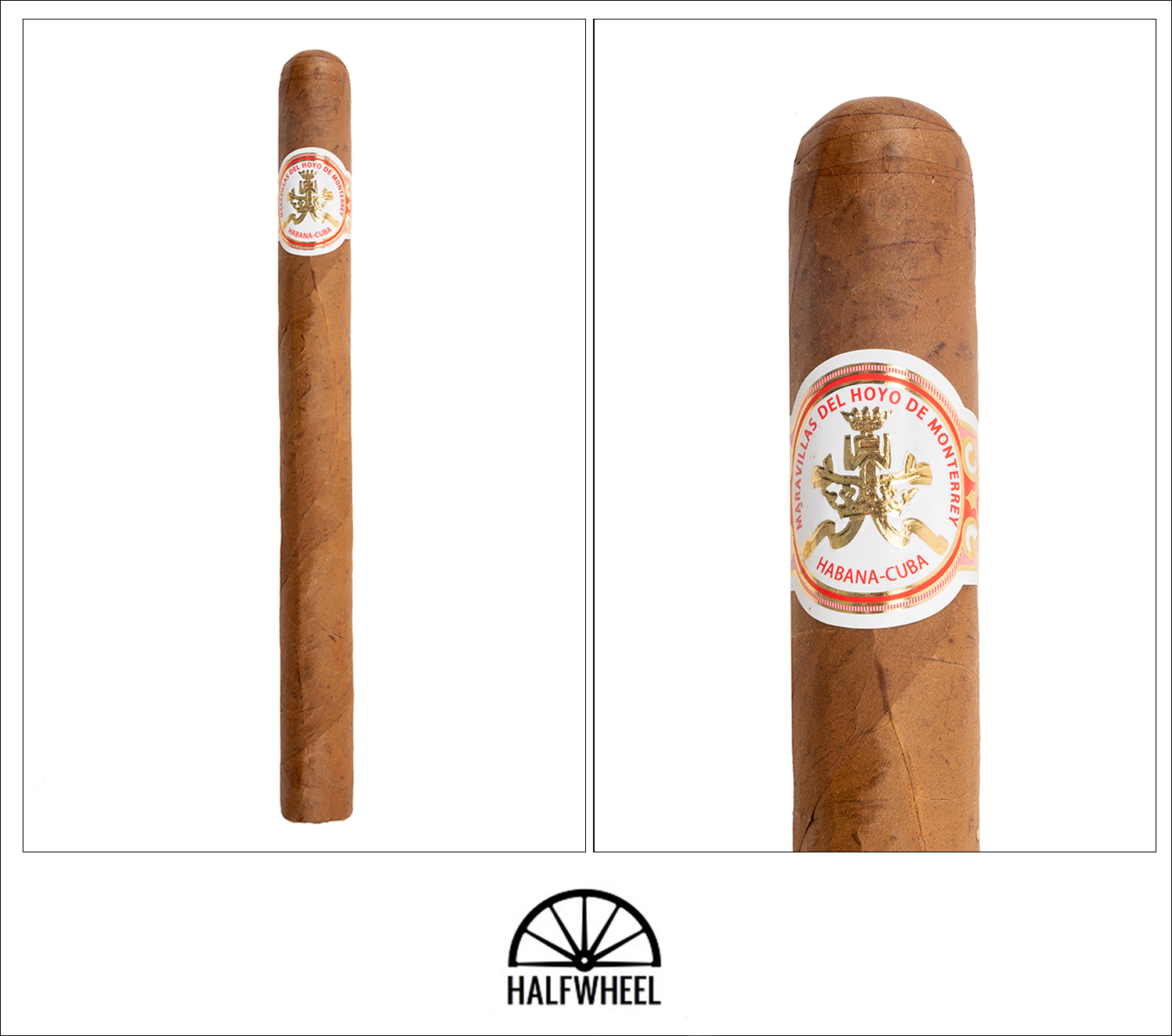 The Hoyo de Monterrey Maravillas is comically big, reminiscent of the cigars that you’d see being smoked by the older ladies in Havana, or if someone was trying to parody the activity. In spite of the size, the cigar looks very well rolled, firm to almost hard when squeezed but otherwise free from any problems and capped quite proficiently. The vein structure is familiar though there are times when I could be convinced that this wasn’t a Cuban cigar if forced to judge it based on the appearance of the wrapper leaf, which is a well-tanned, nutty shade of brown with a bit of mottling but generally even coloration. The foot has aromas of wheat bread, a bit more black pepper than I was expecting, and some subtle but dense sweetness. The cold draw on the first sample is firm, while the other two are very firm to the point of me thinking something is restraining the air movement. Given my experience with the second cigar—more on that in the notes—I’m not optimistic about how the third sample is going to perform. Across all the samples, the flavors are fairly neutral, with peanut the first thing to stand out. While it carries with it a bit of oiliness, there’s not much else to be found, especially not sweetness, spice or pepper.

Even with the slightly tight cold draw on the first and third cigars, there isn’t much of an issue getting air to move through the Hoyo de Monterrey Maravillas, with plenty of smoke production on the first puffs. Out of the gate there is some variety of flavors; the first sample has more black pepper than I would have expected, as I generally don’t think of the Hoyo de Monterrey brand being this peppery. The second has an interesting waxiness coating things early and seems to keep a seal on any other flavors the cigar might have to offer other than the occasional bit of pepper. The third cigar is a mix of peanut and creaminess, lacking almost any pepper and coming across rather muted when compare to the vibrancy of the average cigar. Initial retrohales are a bit mellower and lean more on white pepper than black pepper, which while still bright doesn’t have the slight char that the palate gets when pepper is present. By the one inch mark, there’s a toasty overtone beginning to envelop the cigar that is quite enjoyable, though the base note that is fairly pepper-forward is getting a bit charred. The first clump of ash falls on its own not long after, landing in a solid clump near the ashtray and staying intact save for a few small pieces. The profile is very reminiscent of other Hoyo de Monterreys that I have smoked, though here it is smoother, softer and more well-rounded. There’s a building creaminess that gets accented by a shift towards nuttiness, particularly what I would think of as almond cream. In the case of the second cigar, after not getting much in the way of flavors, I finally decide to inspect the head of the cigar and find a bit of tar buildup, which would seemingly explain the flavor issue. It gets snipped off, though the results aren’t automatically better. Other than a slightly tight draw in one sample, the technical performance has been very good with no complaints in any department and praise for the amount of smoke being produced. The profile sits at medium-plus in terms of flavor and medium in terms of strength.

While I’m hesitant to say that the Hoyo de Monterrey Maravillas gets rougher as it enters its second third, it does lose some of the smoothness that it so wonderfully exhibited in the first third of two samples. Puffs now begin to leave a little lump in the throat, the creaminess feels flat and the refined nuttiness is nowhere to be found. The problematic sample gets another trimming of the head as more tar has appeared and the flavor hasn’t gotten any better, and at this point, I’m wondering if it will even be salvageable. There are some moments where the aroma picks up an interesting campfire note, the first time that it has caught my attention thus far, and sometimes drifts into a smoky barnyard smell, which is equally enjoyable. As the final third approaches, things get back on track a bit, though not to the level that it reached in the first third. There’s more of a full wood note, a pinch of black pepper, the reemergence of a bit of creaminess and some almond, suggesting the cigar could be setting itself up for a strong final third. The only thing that makes me question that is a bit of char on the wood, which while subtle is noticeable. The draw is just a bit tighter than it was in the first third, but otherwise, the cigar is still performing very well. Flavor is a tick more than medium-full, while the strength is medium-plus but beginning to be felt in the system. 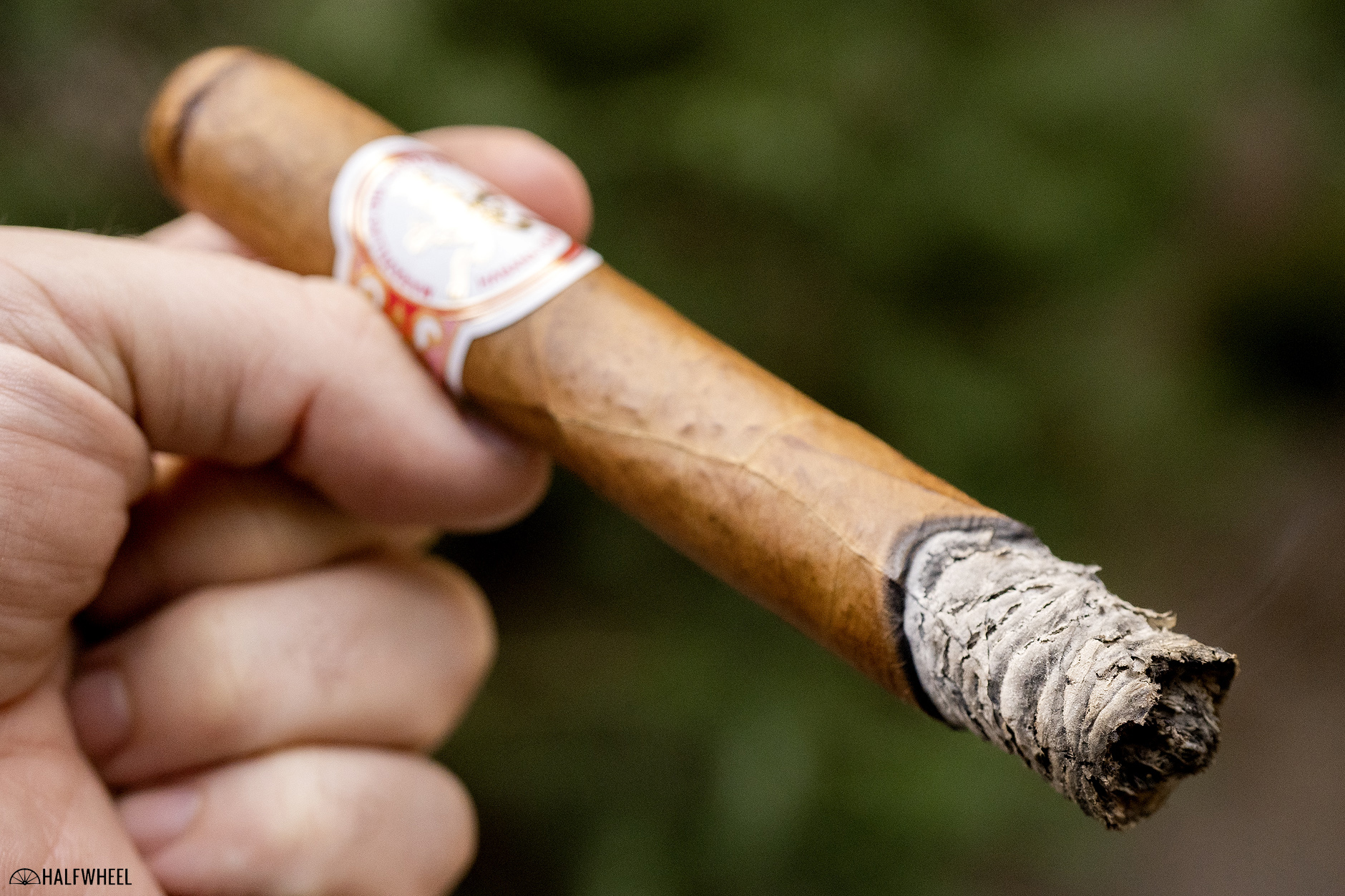 My thoughts—or hopes—about where the cigar is headed in the final third aren’t developing as quickly as I had been hoping; the wood becomes the dominant note and there is a bit of palate fatigue beginning to set in on my taste buds. Not to mention that it takes about two hours to get to the final third, which can be a fair amount of time regardless of what the cigar is doing. In this case, changes are fairly subtle when they do occur, which are few and far between in what I have experienced. The profile turns a bit smokier a la a campfire as the burn line passes where the band would be, and while the palate fatigue is still present, it’s at least gotten a bit of a reprieve from the roughness and now enjoys a more rounded profile, which helps the cigar make a case for being smoked down to a fairly small nub. The second sample—the problematic one with the tight draw and waxy profile—doesn’t get much better, but black pepper manages to cut through enough be its own flavor and sensation but can’t shake the rest of the experience. Strangely, once the band is removed, the draw loosens up quite a bit, as if it had been the cause of the tight draw all along. There’s more black pepper in the profile in those final inches, turning the profile almost 180 degrees from the smoothness it showed in the first third. The flavor profile finishes just shy of full, while strength is at medium-plus. Impressively, the cigar hasn’t shown a single technical flaw other than a burn line that gets slightly uneven but manages to correct itself fairly quickly when it does. 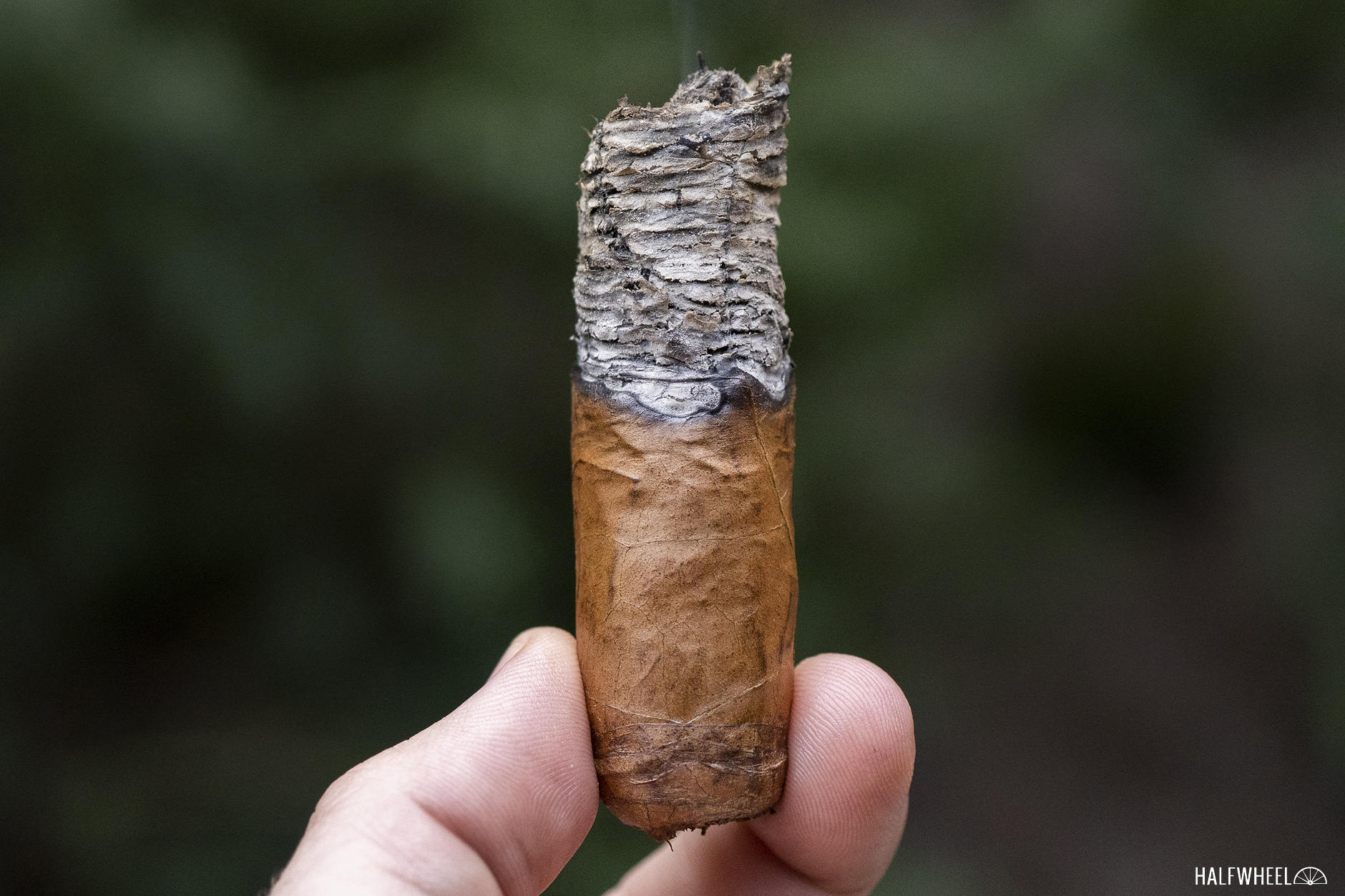 I try and keep my expectations tempered when smoking any cigar, but it’s hard not to have some for a cigar such as the Hoyo de Monterrey Maravillas. In addition to having a fondness for the marca as a whole, the size is unique, the production is limited, and the price is premium, which does set the stage for thoughts of a legendary cigar. Unfortunately, outside of the first sample I smoked, the Maravillas failed to live up to any thoughts I had as to what it might be. The second cigar was a waxy, off-putting flavor, and the third didn’t need three hours to show me it was going to be a fairly flat profile that while enjoyable at times, lacked a truly dynamic profile when evaluated as a complete cigar. While I might be willing to commit another three hours to the experience I got from the first sample, I wouldn't be willing to do that for the average profile that these three samples showed. In fact, I don't know that I'd be willing to commit more than an hour to it, an that's not taking into account the price for the privilege. For me, this is a release that seems better suited to being a display piece that sits on the shelf than it does being a cigar to be enjoyed.