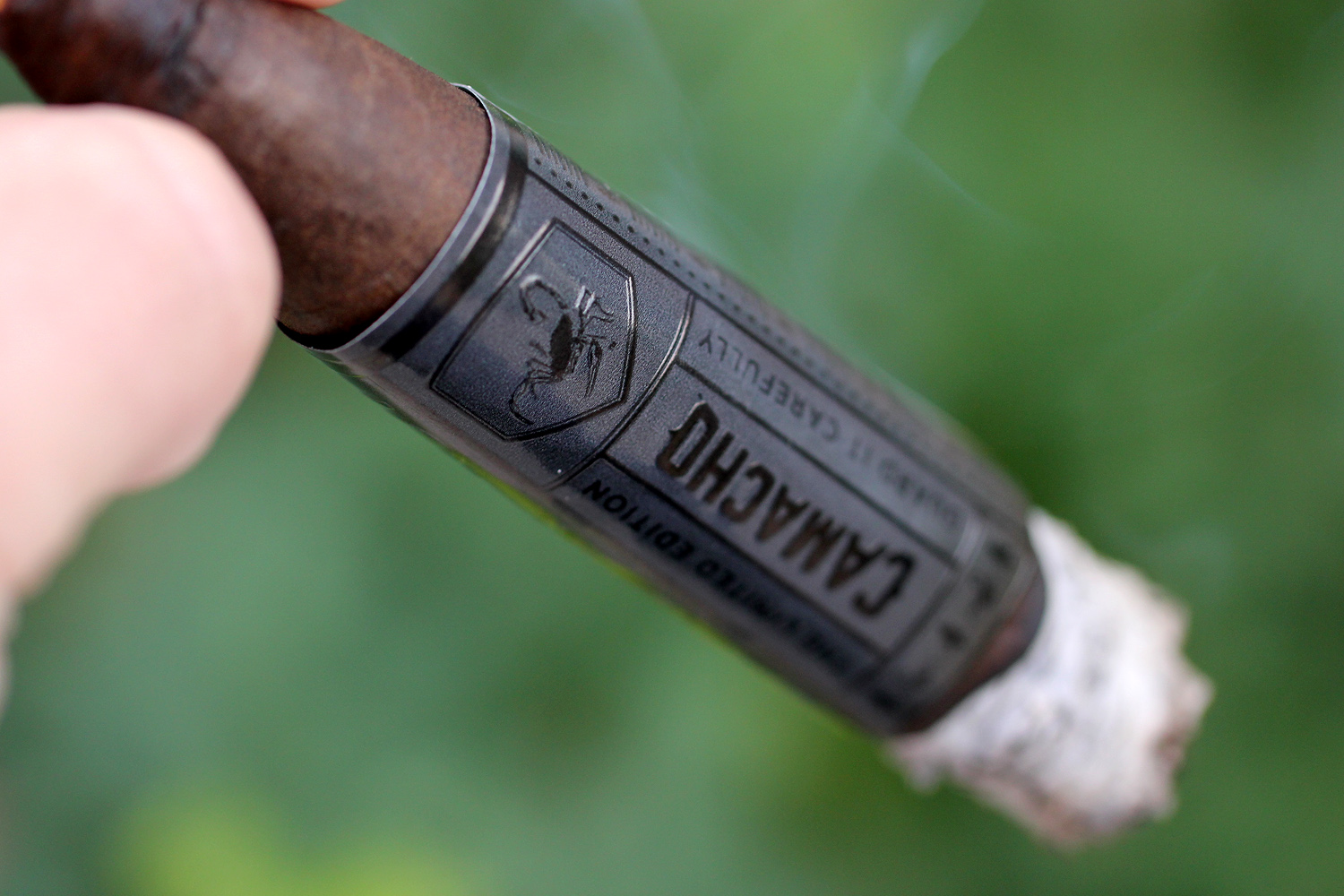 To say 2013 was a year of rebranding and new beginnings for Camacho would be an understatement. Oettinger Davidoff AG, the parent company, finally made its changes to Camacho known, a nearly complete overhaul including new packaging, lowering price points, a reblending of four cigars, the discontinuation of some lines and the announcement of a new limited edition.

The bulk of the details about the rebranding and rebooting of Camacho can be found here and here, as well as in our coverage of Davidoff’s 2013 IPCPR booth. The new look Camacho products have been showing up on retailers’ shelves for some time now, so by now you should have also been able to get a look at them in person.

What has also begun showing up at retail is Camacho’s latest limited edition, Blackout. When Camacho announced the Blackout, they sent out the following information:

Leaves from the top 2/3’s of the plant get additional sun ripening, which boosts the level of sweetness with additional sugars being creating during the process of photosynthesis. The heavy oil noticed on this wrapper leaf is as a result of the plants natural defenses, protect itself by creating more oils to fend off the sun’s glare.The Camacho Blackout Limited Edition 2013 is being released in five sizes, each getting 1,000 boxes of 20 cigars produced: 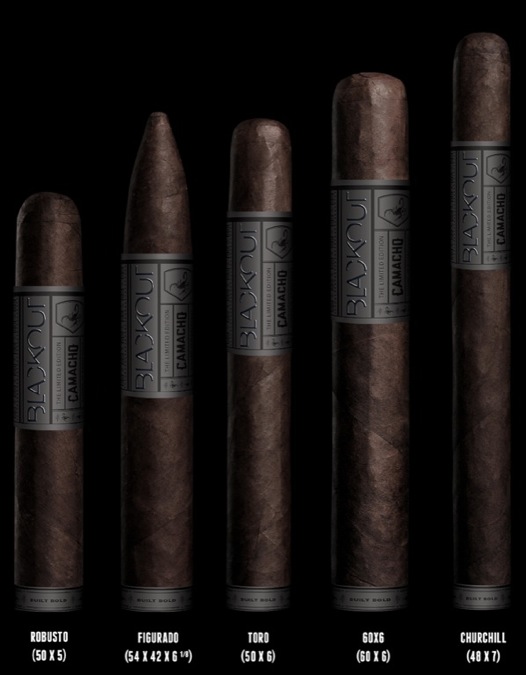 The boxes have also received the new Camacho branding treatment, and look like this: 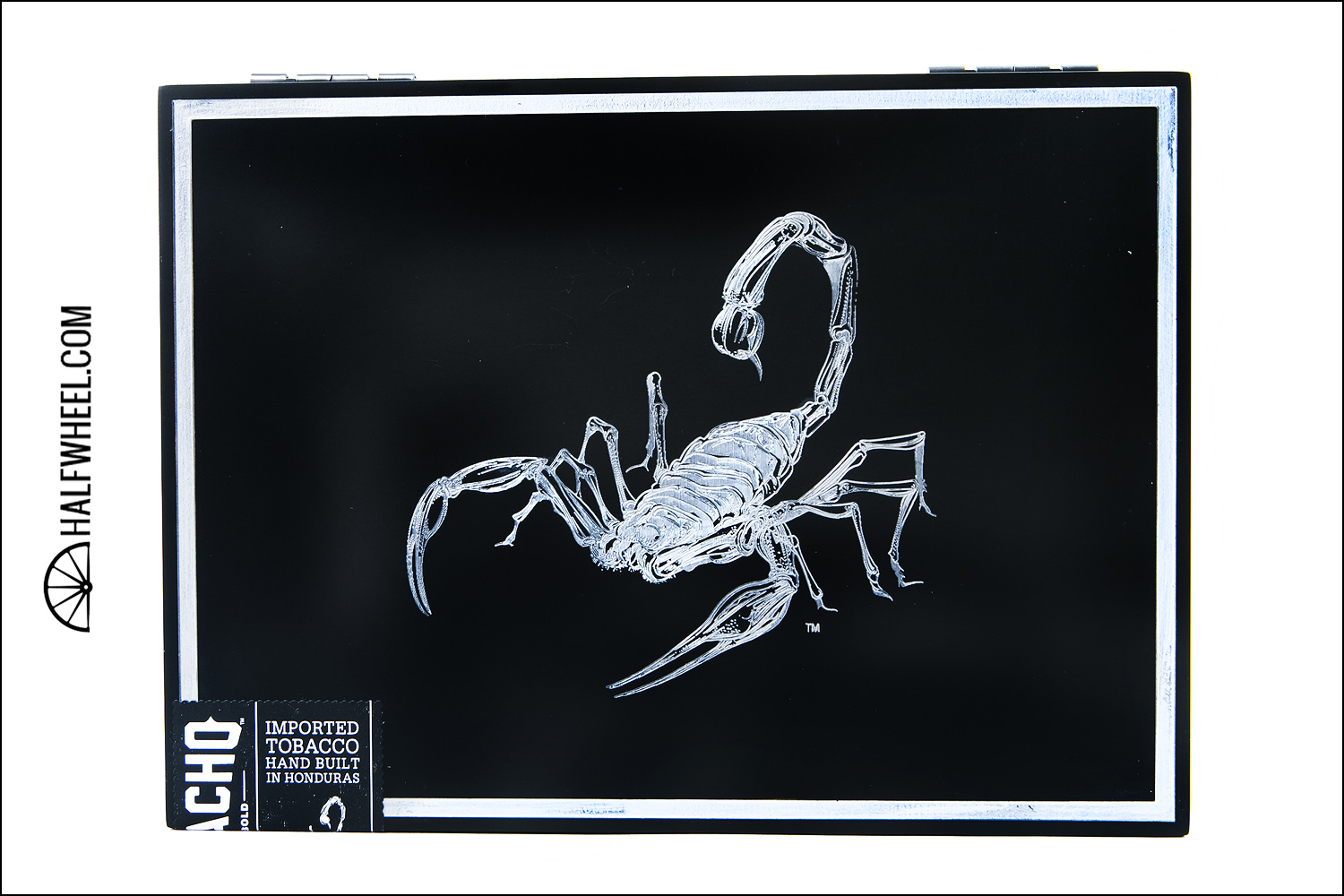 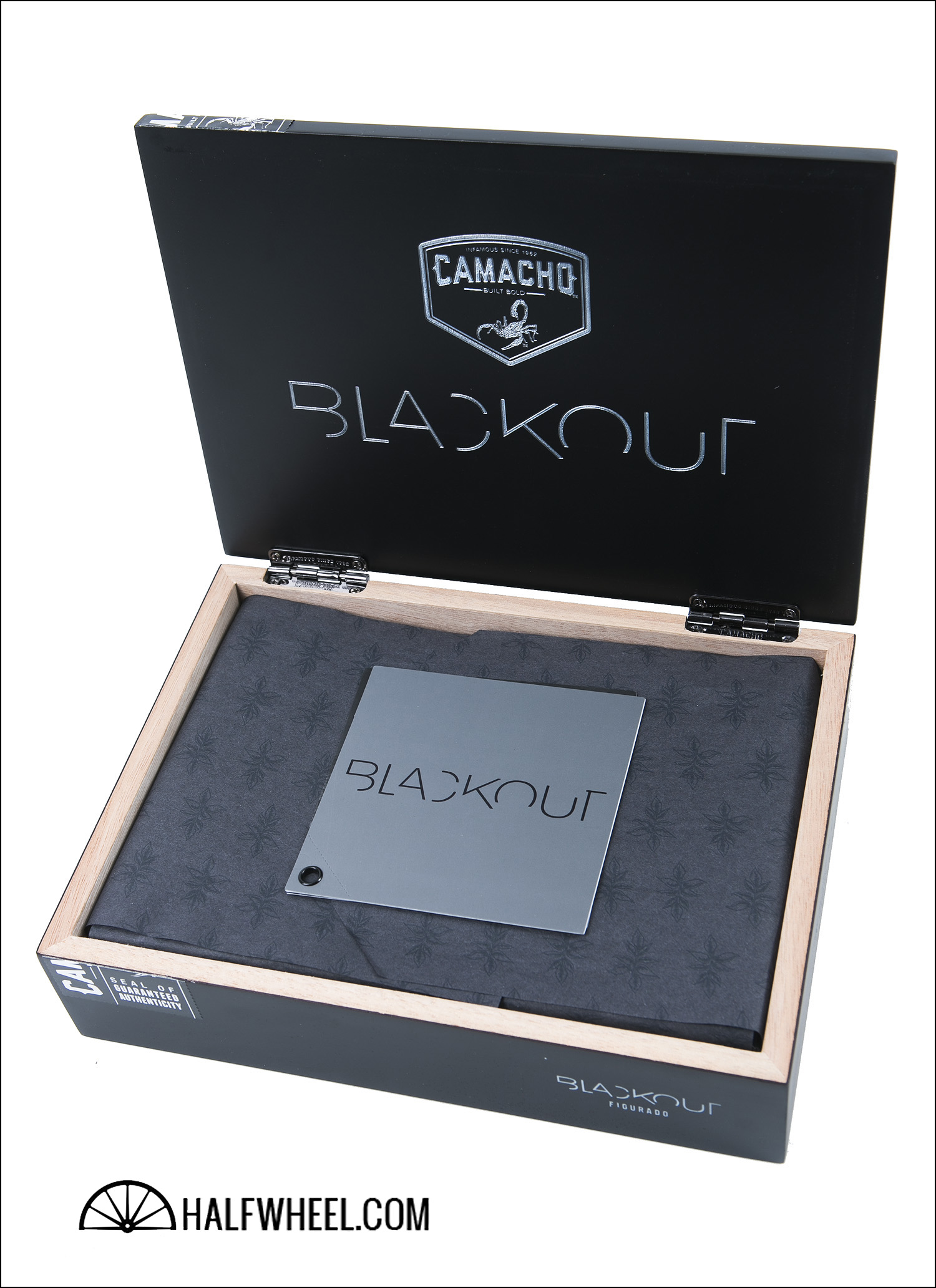 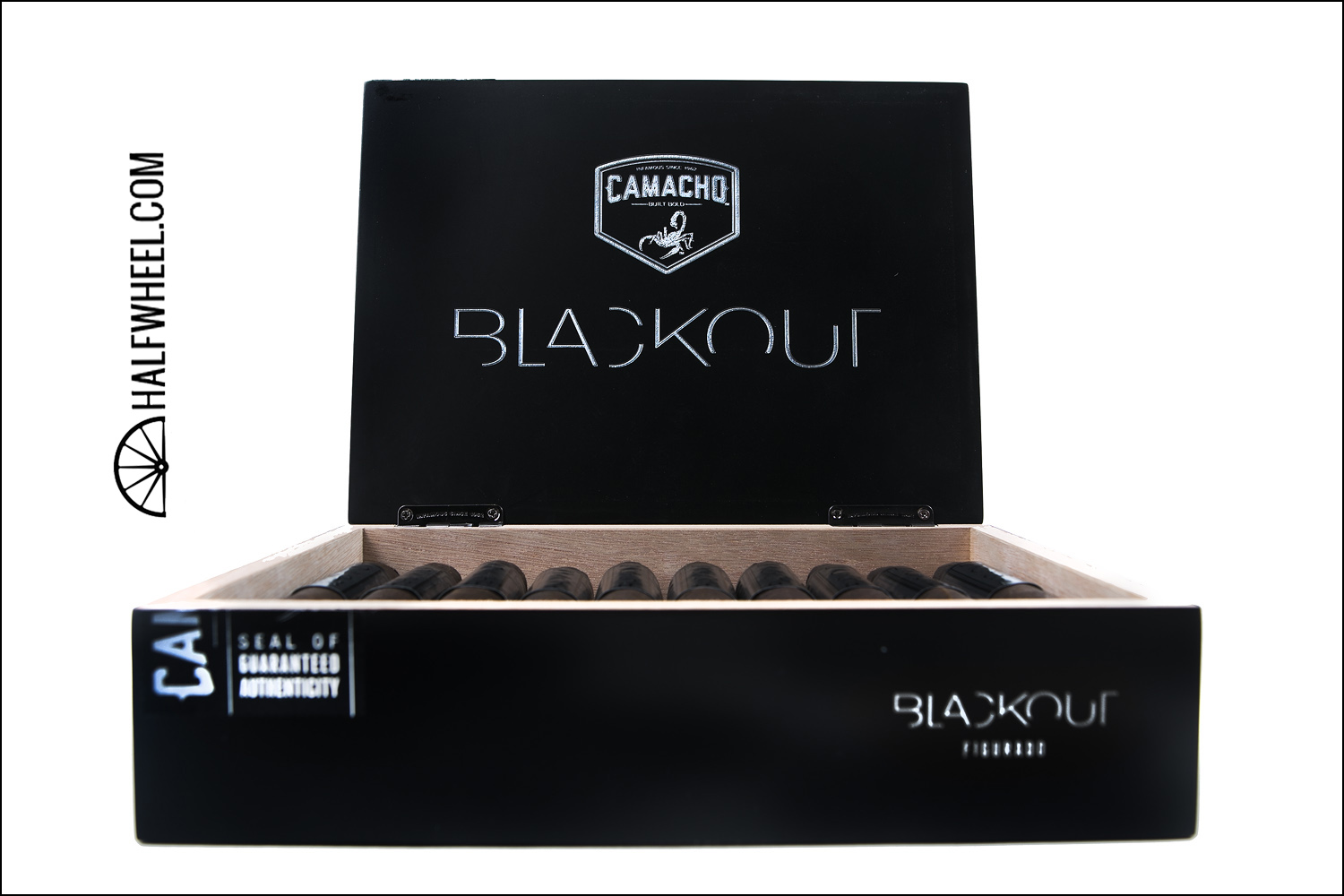 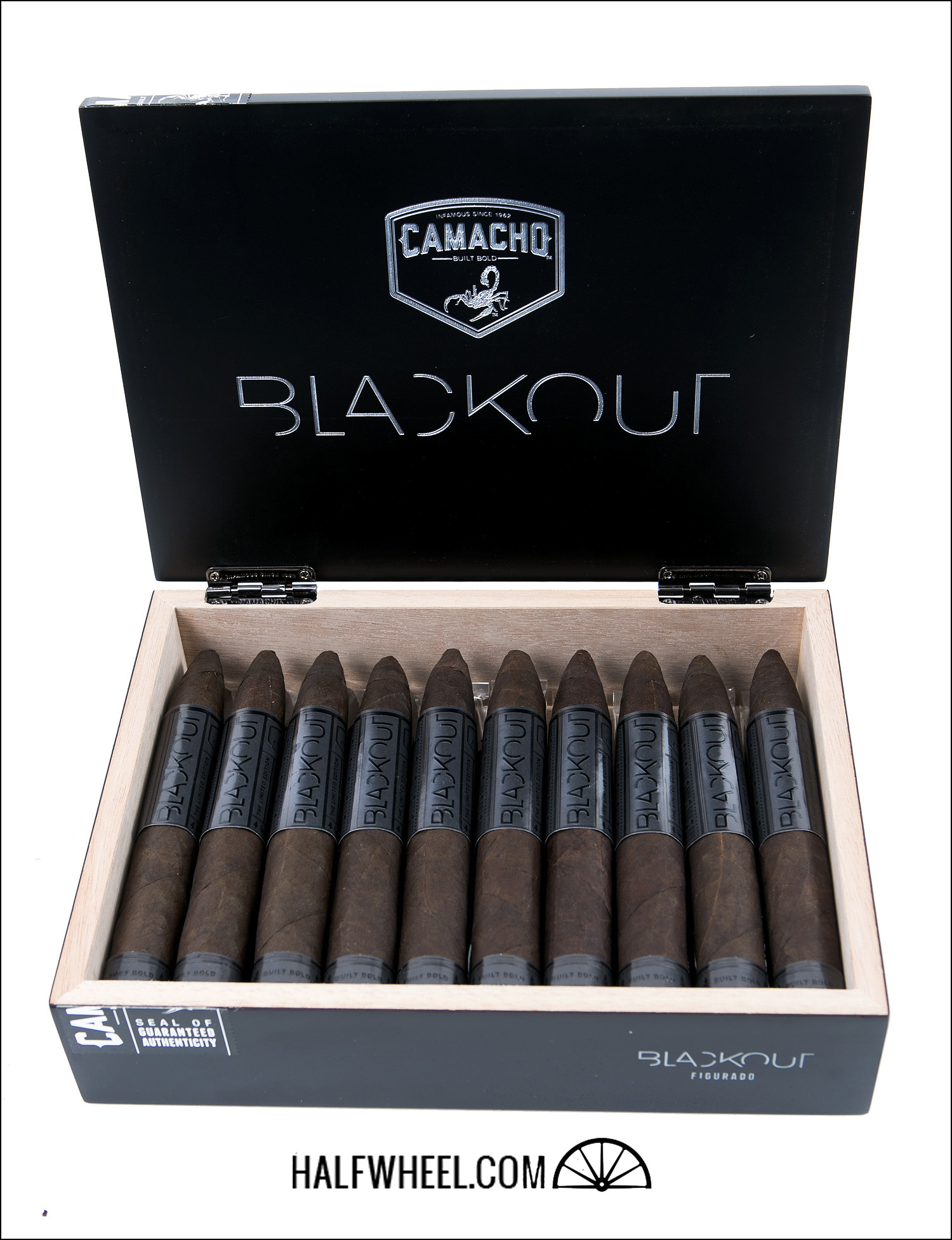 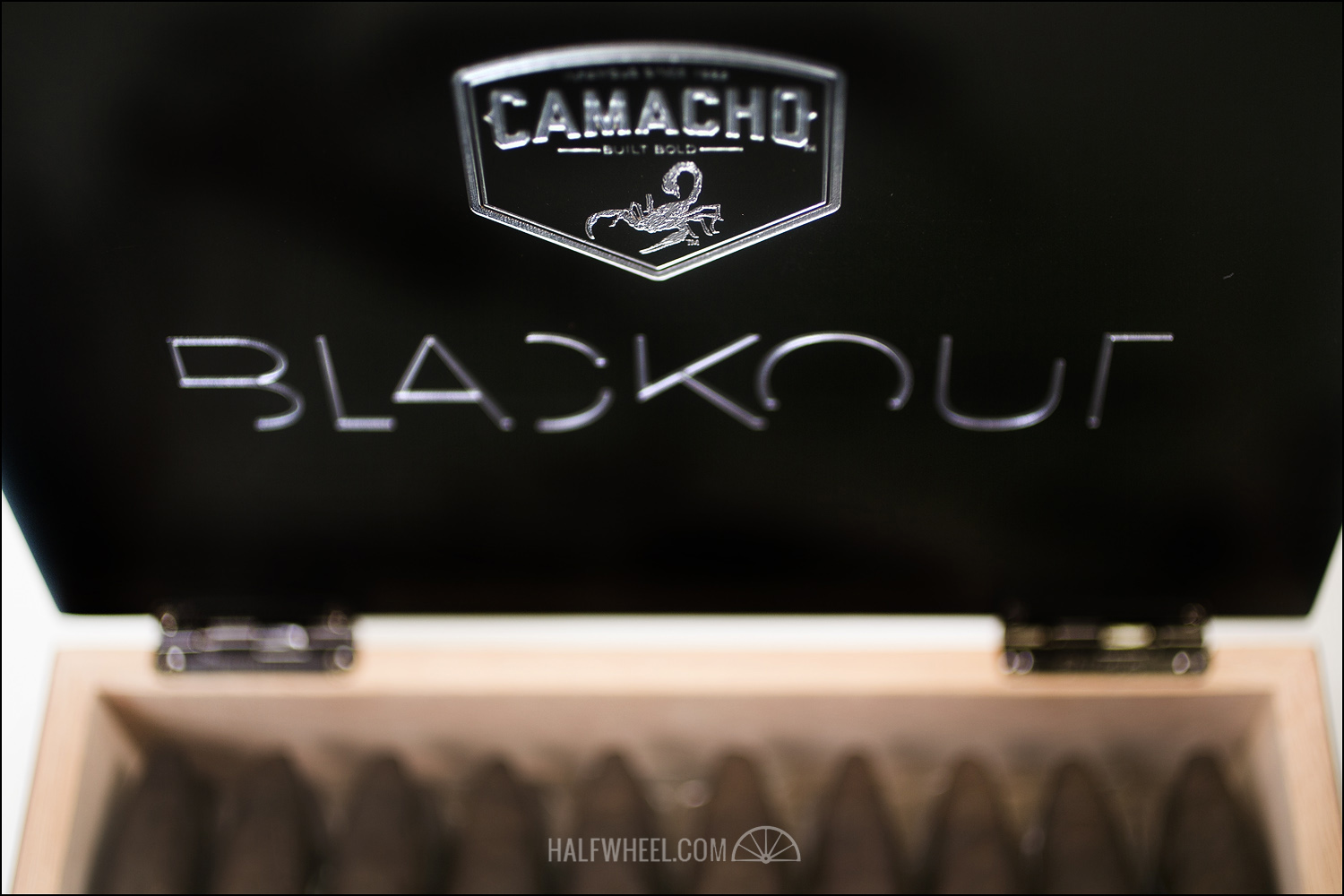 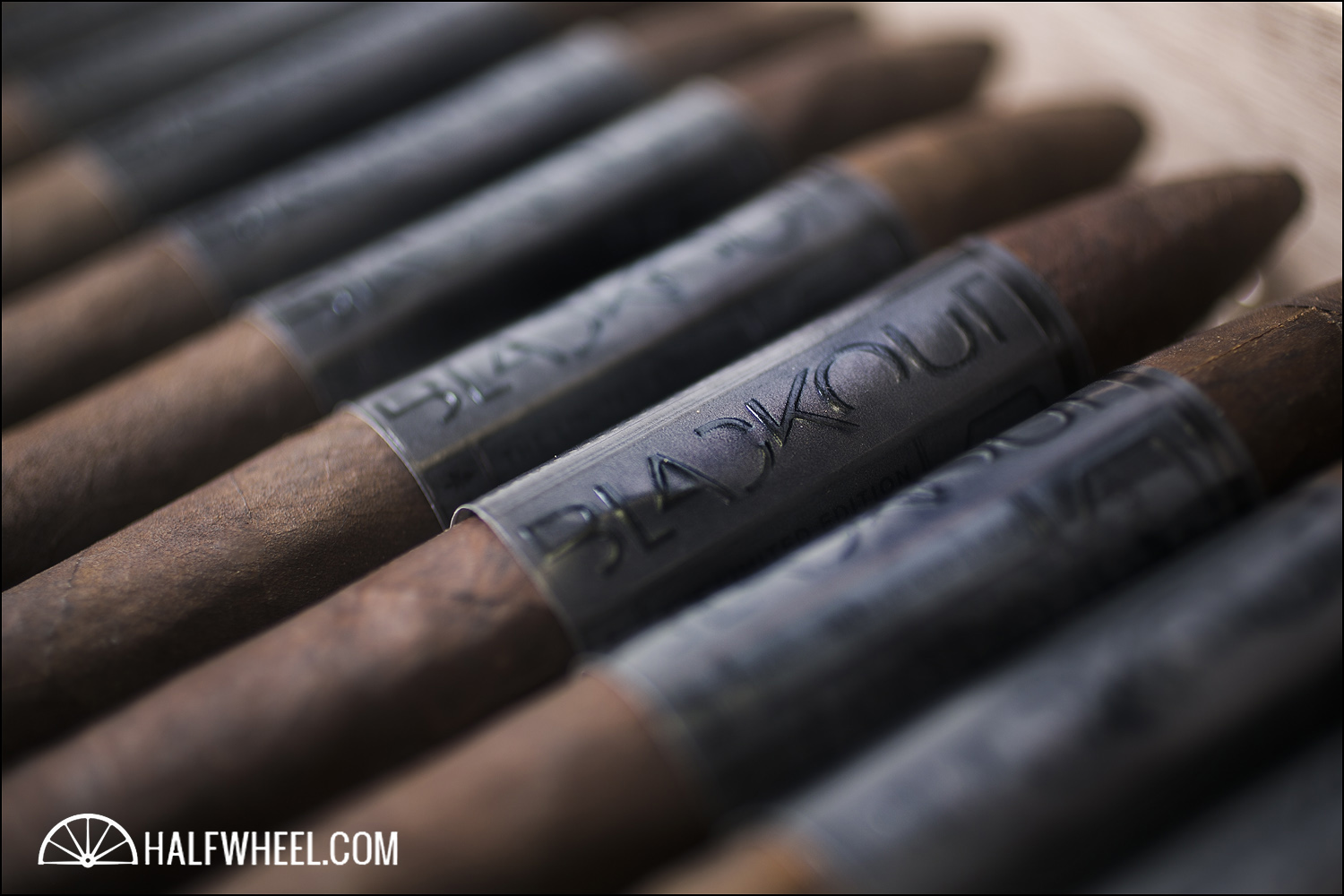 As noted above, the leaves for the Camacho Blackout Limited Edition 2013 undergo a fairly strenuous fermentation process, and are then left to rest for an extended period of time. In this case, that rest amounted to two years, which would date their creation to summer or fall of 2011, well before the rebranding of the company. It should be noted, while it’s been just over five years since the Eiroas sold the company to Oettinger Davidoff AG, the family still has a long-term agreement with the company to grow tobacco. 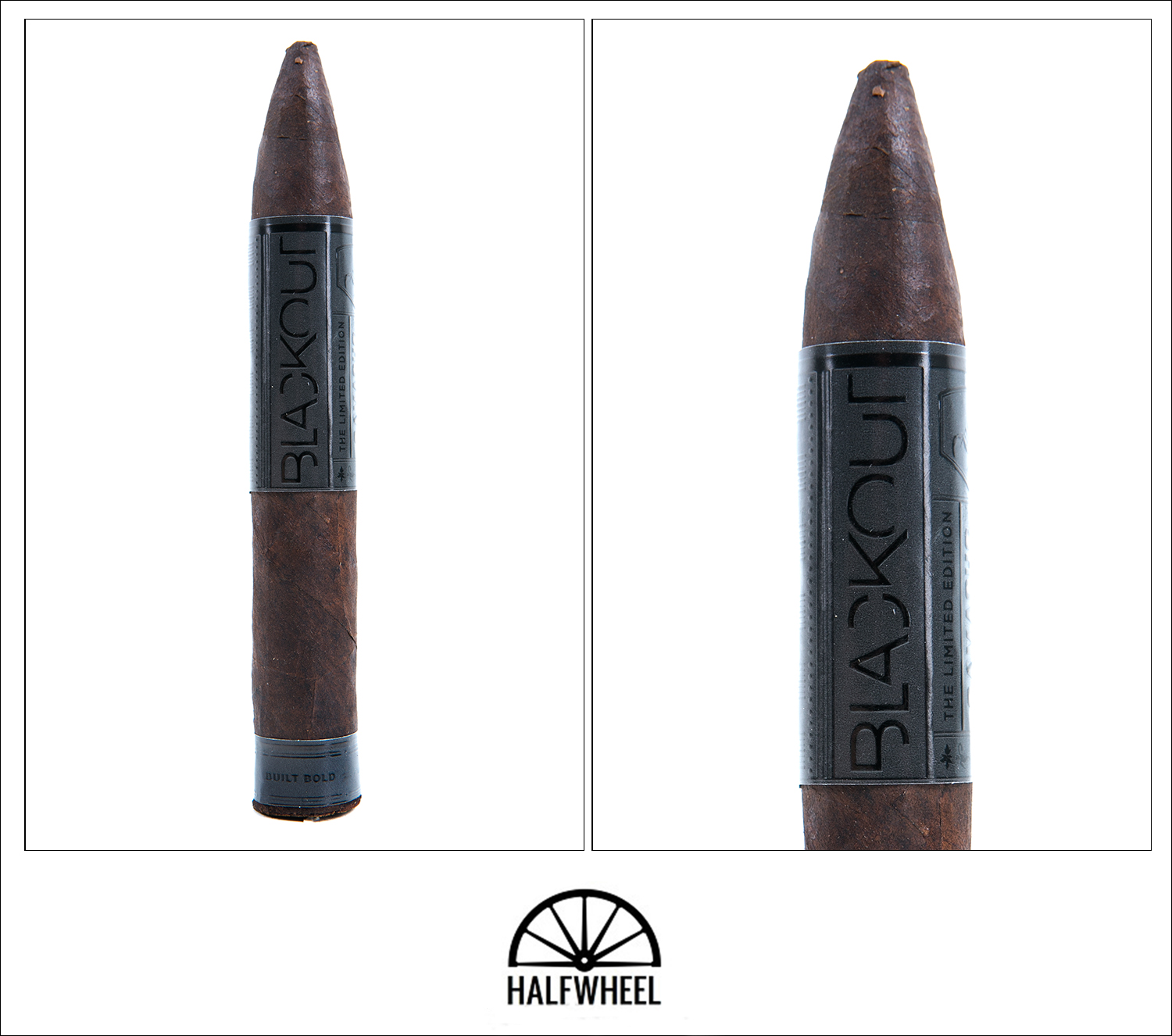 While not as dark as the Triple Maduro, the wrapper on the Camacho Blackout Limited Edition 2013 is certainly dark, with a more matte finish that doesn’t glisten with oil or offer any crystallization. The vein structure is solid and pronounced without being distracting, there is a bit of tooth, and the cigar allows just a touch of give throughout its length. On the pre-light aroma, there are notes of both light and dark berry sweetness and a good bit of wood, which together create a surprisingly bright introduction to the cigar. The cold draw is easy and unrestricted, offering only a subtle note of beef jerky, leaving the mind guessing as to just what kind of flavors the Blackout will offer.

The Camacho Blackout opens up with fairly big flavors and varying amounts of pepper, as a woody bite hits the front of the tongue. The eyes get a fair amount of pepper through the smoke, though it’s not until the burn line has progressed about an inch and a half up the cigar that pepper starts to become a significant part of the flavor equation, and even then it’s more in the eyes and nose than on the palate. The bright white ash is fairly tight, and in one cigar, began to split down the middle, as if it had been hit with an axe. Smoke production is sufficient, often plentiful, and the burn line stays fairly even, if not always perfectly straight. A fragrant and pleasing aroma rounds out the cigar’s early offerings, and if anything seems to be where most of the sensory engagement is to be found, particularly when the cigar is enjoyed in still, uncontaminated air. There isn’t a significant change in flavor or strength heading into the second third of the Camacho Blackout, with the addition of a touch more pepper being saved for the midpoint. The flavor is still good and plenty enjoyable, with an underlying sweet and aromatic nature, though a lack of transitions and development don’t have it singing or keeping my palate on its proverbial toes. If you’re able to enjoy this on a clean palate and in an environment that allows the aroma in the cigar to linger, you’re likely to get much more out of this cigar than you would in a crowded cigar lounge. A retrohale just past the midpoint offers a decent bit of strength through some tingling light pepper notes. The leading note in the aroma continues to be a bit of a puzzler, leading me at times to think of pine needles as the closest approximation I can pin to it. The final third seemed to have the most discrepancy between the three cigars I smoked for this review—in the first, it was almost business as usual with no discernible transition point or notable developments. In the second, the flavors took on a pronounced woody bite that was enjoyable thanks to a sweet and tangy note that left behind a lingering white pepper note on the tongue, while the eyes get a much stronger black pepper note. In the third cigar, the aroma had the most notable transition, shedding the fragrant pine needle-esque note for warm baking spices. There is a notable concentration in the flavors as the cigar gets close to its conclusion, with an earthiness starting to step to the forefront, while one final retrohale shows an increase in pepper. Smoke production increased across the board in the final third, with copious amounts of silvery-white smoke being produced as the Camacho Blackout gets smoked down to the nub. 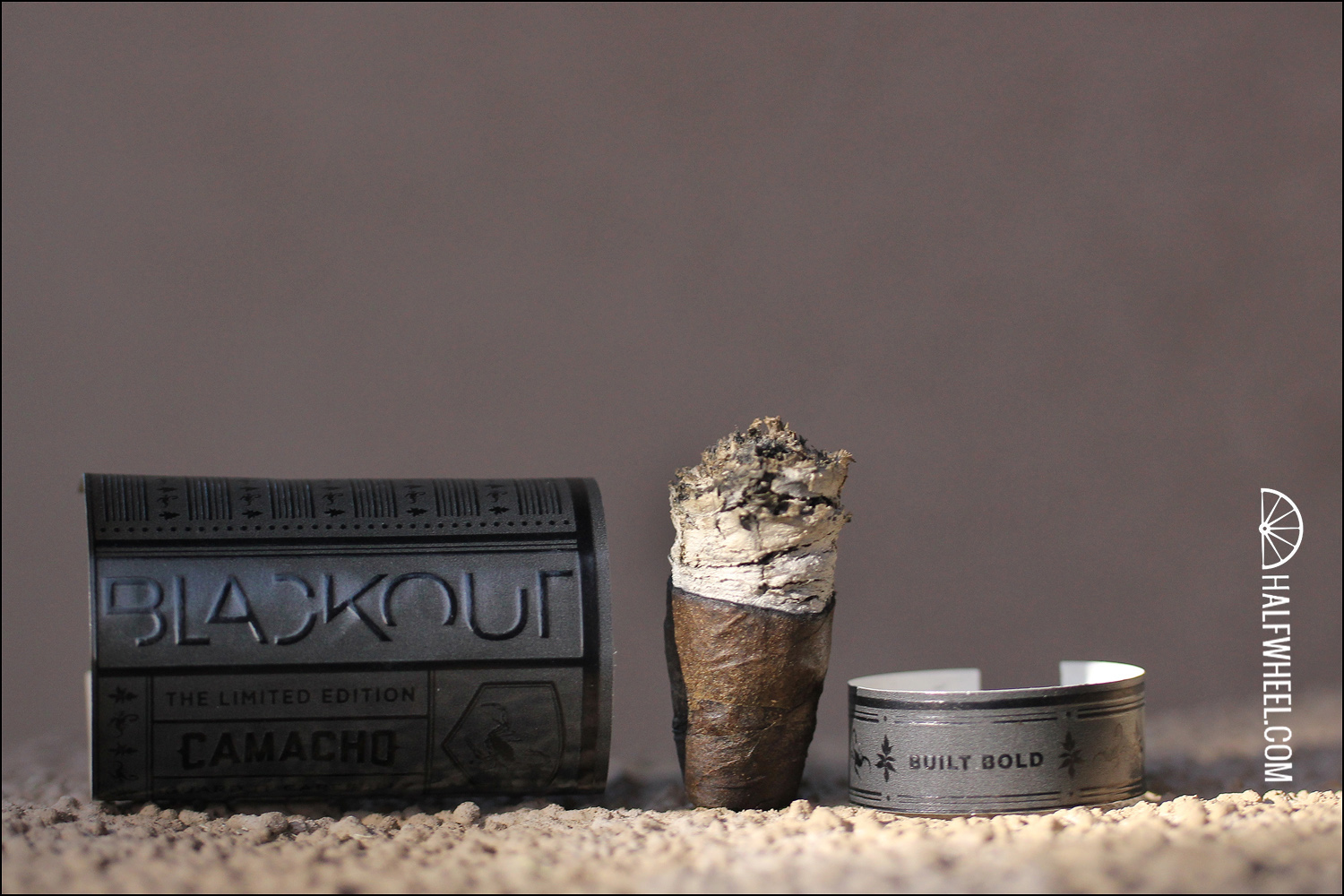 I can't say that I was floored by what the Camacho Blackout Limited Edition 2013 offered, though I wasn't turned off by it either. If anything, I was a bit disappointed by the lack of transitions and flavor development, which seemed to come on suddenly as opposed to being developed, and were rooted more in the addition of pepper than the development of flavors. There is a fair amount to be said for the aroma of the cigar, which was average at its worst and captivating at its best, and often was the best gauge as to what the cigar offers. The additional rest has done a lot to smooth out the smoke and lets what flavors there are come through clearly, which make it a very enjoyable smoke, though not necessarily one I think will go down as one of Camacho's greatest creations.