In 1989, Davidoff of Geneva was created in order to allow the Swiss company to enter the U.S. market, a move that was made alongside the company’s decision to leave Cuba after issues over how its cigars were being made. While the math still doesn’t exactly add up—as 2014 would seem like the actual 25th anniversary—Davidoff is celebrating with a cigar for its silver anniversary, the Davidoff of Geneva 25th Anniversary.

One should be clear, this is not celebrating 25 years of Davidoff (White Label) in North America. That anniversary by my math would land some time in 2015, March to be a bit more precise. Rather, this is the 25th anniversary of selling cigars in America—something that gets even more confusing.

Davidoff’s explanation centers on 2013 being the 25th year in which it has sold cigars, because the company opened up its first New York City retail operation in 1987. Oddly, this isn’t the cigar to honor the 25th anniversary of the retail stores in the U.S. themselves, there’s actually a completely separate cigar planned of that, one the company hasn’t shed a ton of light on.

The Davidoff of Geneva 25th Anniversary will be released in October with a price tag of $22 per cigar and $220 per box of 10 cigars. There will be 3,000 boxes of the Dominican puro released to the U.S. market. The cigar made its debut at the 2013 IPCPR trade show and convention where it was shown off in the Davidoff booth, as well as handed out to the attendees of the Davidoff Golden Awards dinner.

Here’s a picture of the box from the trade show: 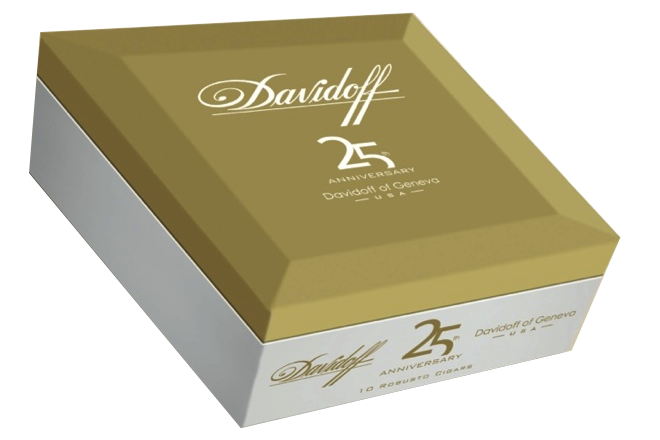 (via Davidoff of Geneva) *3,000 boxes are limited to the U.S., we haven’t seen any numbers regarding whether the cigar will be released worldwide.

Even with this big of a cigar, Davidoff White Labels would fail a blind taste test. Why? Because the cigars are rolled that well. Aroma-wise the slightly red and seamless wrapper has a sweet and moist hay aroma with a fading chocolate pepper. Cold draw is similar to the aroma, although the milk chocolate is now the dominating note over moist woods and the hay along with a touch of peaches. As a site, we’ve gotten away from describing draws as “perfect” for the most part as it didn’t seem entirely accurate, but this is as close as I’ve come all year to perfection; I just can’t see the tightness being in a better place or smoother physically.

The cigar starts the first third with a great mouthwatering nuttiness before a thick cocoa and grainy note coats the palate. While there’s a touch of spice up front, a black pepper hits the middle of the tongue with a more dominant force. In addition, there’s a beautiful cereal note through the nose. Eventually, the Davidoff of Geneva 25th Anniversary shows a core of a soft cedar, pecan and espresso. On the finish, there’s some charred woods, grassiness and some tea leaves while the nose shows a combination of grittiness with lemon zest, a POM-like flavor—not really full-on pomegranate—and oak. While the flavor is big, complex and robust, the construction could be a bit better as there’s an occasional touch-up needed. As the second third begins, the big Davidoff loses its ash. The profile is getting sweeter and shows more cedar and a bit of creaminess on the finish that was present before. It is slightly more nuanced with both a saltiness and sweet nuttiness showing their faces. Midway through, the cedar disappears coinciding with a dramatic increase in smoothness. While the finish gets more complex with an added butter note and a bit less grass, a toastiness is added to the retrohale’s make-up. Here’s a funny story. I managed to get through the first two thirds of the first of my two samples without noticing the draw, that’s how good it is: crisp, smooth and consistent from start to finish. Upfront, there’s an added floral note with the core, which has now become a bit earthier. Peanut shells enter the retrohale, while the finish remains relatively similar: lemon zest, roasted cedar, a sweet pomegranate and tea leaves. The cigar manages to end as complex and clean as it started: layers of flavor with zero harshness. As far as construction, outside of touching up one of the two cigars during the first third, I am not sure where I would even start complaining. 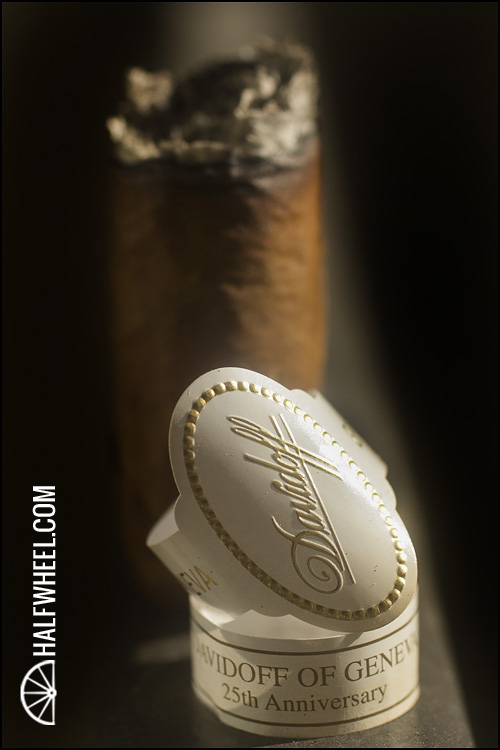 I have mentioned in the past that there are Davidoff cigars I really like—perhaps more than the rest of this site—I just hadn't reviewed any of them. This is Davidoff at its finest: a flawless draw, layers upon layers of complex flavors and a price tag that we so oftentimes associate with the Davidoff name. While I don't get the anniversary, I more importantly get the cigar. There have been Davidoffs reviewed on this site that I have found good, but never—up until this point—great. At $22.00 per cigar it's going to be frustrating, but I'll splurge on a few for when my palate needs this sort of cigar, because even for Davidoff, this kind of finesse is not a common occurrence.