On October 8, 2013, Davidoff of Geneva held a gala at the Grand Havana Room in New York City to release the Davidoff Madison Avenue 25th Anniversary, which commemorates the 25 years Davidoff has been in the retail cigar business. There were only 15,000 cigars made for the release, priced at $20 per cigar.

The boxes for the Davidoff Madison Avenue 25th Anniversary use a red lacquer with gold lettering. They look like this. 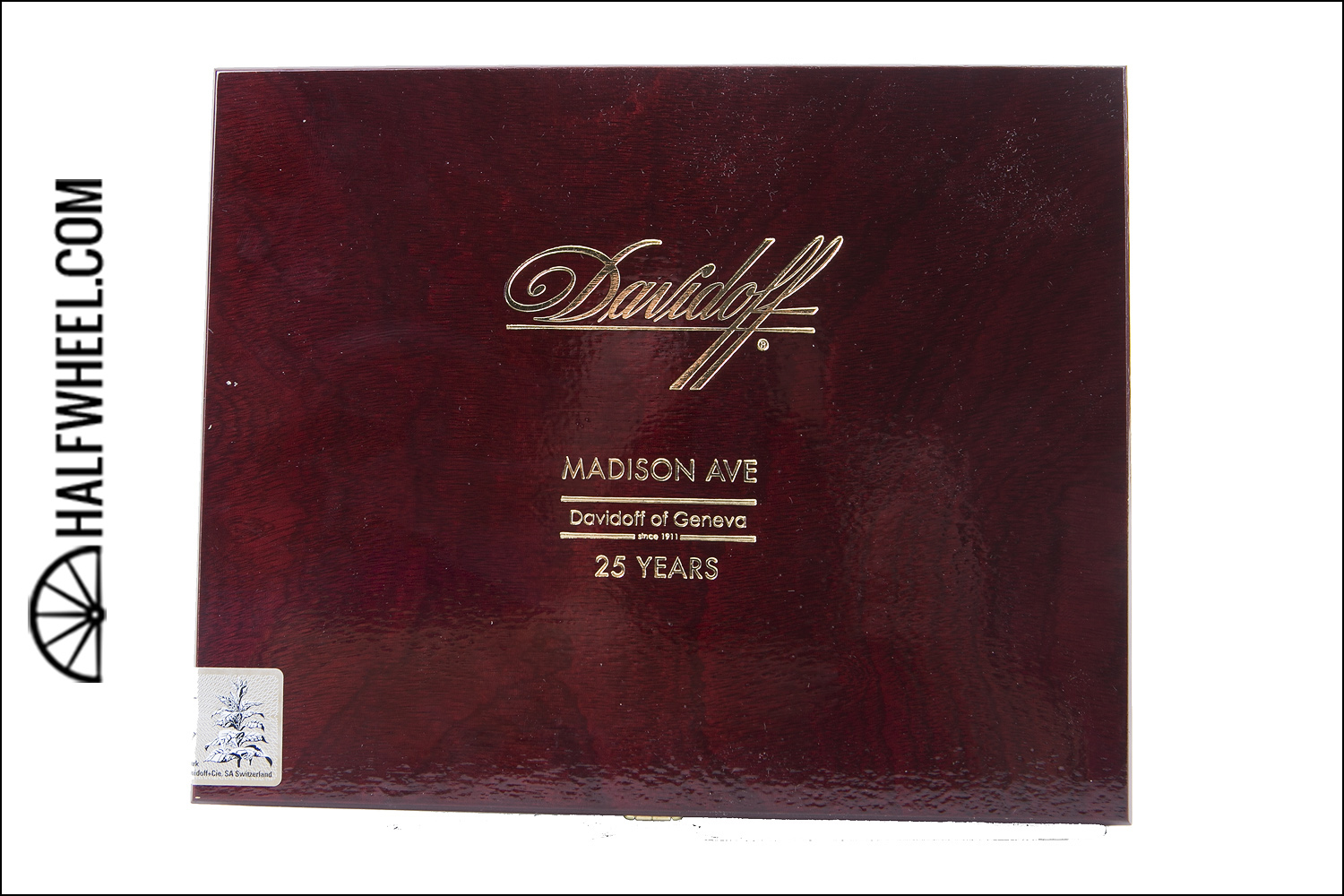 Inside the lid is a quote taken directly from what was written by Zino Davidoff himself in the guest book when the Madison Avenue store opened for the first time on June 10, 1987. The inscription captures Zino Davidoff’s excitement at the opening of the store, and he wishes success on the new venture. This is the second cigar celebrating Davidoff’s 25 years of business in the U.S. The company showed off the Davidoff of Geneva 25th Anniversary at the 2013 IPCPR trade show and convention in July, although the cigar actually did not begin to ship nationally until after the Madison Avenue release.

The two releases are:

But enough about that, lets get down to business, shall we? A peanut brown wrapper that is smooth to the touch covers the Davidoff Madison Avenue 25th Anniversary and it is almost totally devoid of any seams or oil. The cigar is almost hard as a rock when squeezed with very little give. Aroma coming off of the wrapper is a combination of creamy oak, leather, earth and white pepper, while the cold draw has slight flavors of mushroom, leather and creamy oak.

The first third of the Davidoff Madison Avenue 25th Anniversary starts off with flavors with oak, mushroom, earth, leather, coffee and milk chocolate. There is an interesting buttery note that I am noticing, especially on the finish, and it combines quite well with the sweet milk chocolate and white pepper that is present on the retrohale. The retrohale is also extremely smooth, with just a touch of white pepper that helps the profile, but is not noticeable on the lips. Smoke production is well above average, and construction-wise, the draw has just the right amount of resistance while the burn is excellent. The overall strength is quite mild so far, and ends the first third between the mild and medium marks. Coming into the second third of the Davidoff Madison Avenue 25th Anniversary, and the buttery creaminess on the finish increases a bit, while the white pepper on the retrohale remains at roughly the same level. Flavors of sweet nuts, light earth, leather, milk chocolate and coffee blend well with the aforementioned butter note, and the burn and draw continue to impress. Smoke production is still copious and the strength has barely reached the medium mark by the end of the second third. A wonderful combination of nuts, wood and white pepper are the dominant flavors in the final third of the Davidoff Madison Avenue 25th Anniversary, while the retrohale brings even more buttery creaminess that really helps the complexity. There is a bit more sweetness present as well—mostly on the finish—as well as more notes of leather, slight earth, coffee, hay and milk chocolate. The amount of smoke coming from the foot has seemed to decrease a bit, but both the burn and draw are still excellent until the end. While the strength has increased slightly, it ends firmly in the medium range by the time I put the cigar down with less than an inch left. My main question coming into this cigar was how it would compare to its sister release, the Davidoff of Geneva 25th Anniversary, which I loved. Where the Davidoff 25th has a noticeably sweeter profile, the Madison Avenue 25th is significantly creamier on the finish. The profile is nuanced and decently complex, the construction could literally not get any better, and the buttery note on the finish is excellent.  While not a powerhouse by any means, there is some noticeable strength behind it, and smoke production is well above average. The Davidoff of Geneva 25th is the better cigar, but the Madison Avenue 25th is a wonderful blend in its own right, and well worth picking up.