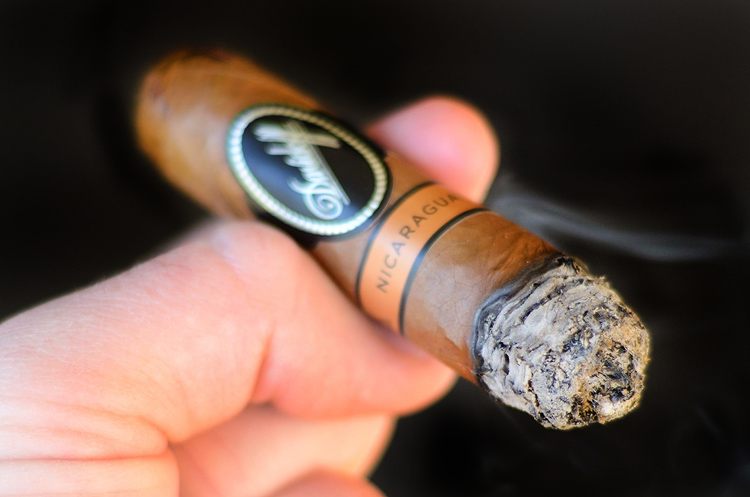 Earlier this year Davidoff made the announcement that they were going to release a Nicaraguan puro. This was quite the departure from their normal fare, so much so that some wondered if the average Davidoff cigar smoker would even enjoy something potentially so different.

Davidoff seems to have kept that in mind however, as the tobaccos they used in the blend have been aged to create a profile that brings something new to the table while still representing the Davidoff profile. The news story we posted in June featured a press release which explains the blend and process in more detail:

Davidoff masterblenders, led by Hendrik “Henke” Kelner, went on an exploration for a new type of blend that would stimulate both the bitter and sweet taste buds. The team embarked on an adventure searching for tobacco across the world’s renowned tobacco regions that would enable the creation of such a cigar. The relentless pursuit for the right blend paid off when they discovered that a blend crafted with the finest leaves from plants grown in the fiery volcanic soil of the Esteli, Condega, Jalapa and Ometepe regions of Nicaragua created just the right balance of sweet and bitter notes to tantalize the palate.

It took time, patience and perseverance to create the perfect conditions in which to craft these fine cigars. 10 years were needed for the preparation, curing and ageing to tame the wilder tendencies of the Nicaraguan tobacco, and to deliver an exceptional blend with all the intensity, excitement and refined sophistication aficionados would expect from Davidoff. As with all Davidoff Cigars, and to guarantee its quality and exceptional craftsmanship, the new Nicaragua range is hand rolled in Davidoff’s Dominican facilities by expert rollers.

“Davidoff Nicaragua has been crafted to delight today’s adventurous aficionados who are in the mood to discover new and exciting experiences to fill their time beautifully. These superb cigars combine the signature Davidoff refinement with all the intriguing intensity of Nicaraguan tobacco,” notes Charles Awad, Senior Vice President Global Marketing and Innovation at Oettinger Davidoff Group.

The Davidoff Nicaragua Experience
The 100% Puro Nicaraguan blend combines a 10-year-old Habano Seed Nicaragua Rosado wrapper in a beautiful colour, with a binder from Jalapa and a filler blend of tobaccos from Esteli, Condega and Ometepe. The range comes in three sizes: Toro (5 1⁄2 inches; 54 RG); Robusto (5 inches; 50 RG) and Short Corona (3 3⁄4 inches; 46 RG). Announced at the 2013 IPCPR trade show and convention, the limited production Belicoso size is only available for sale by purchasing the limited edition Davidoff Nicaragua Humidor. Pictured below, it holds 48 of the Belicosos and the top part lifts off and has a space to store accessories. The humidor is limited to 250 pieces and only 100 of those are allocated for the United States. 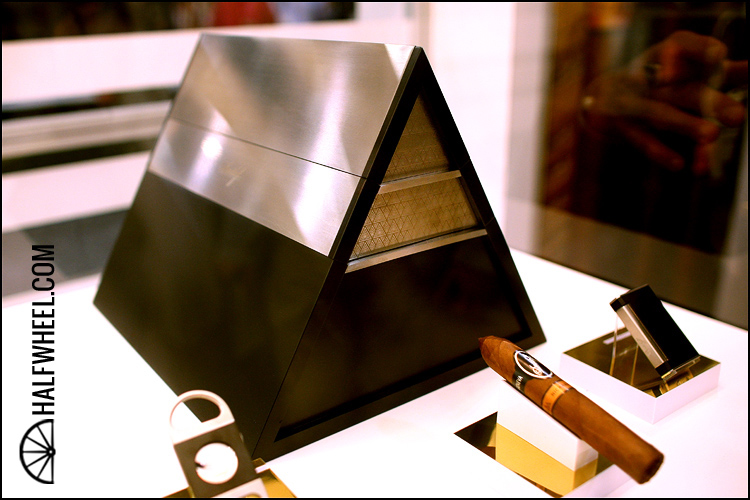 Pricing for the humidor is set at $3,900, but Davidoff considers the humidor to be valued at $3,060, making the cigars $840 for 48, or $17.25 per cigar. Davidoff has given out 500 cigars at various events, including the Golden Band Awards dinner at IPCPR, but the only other way to get the cigars is to purchase the humidor. 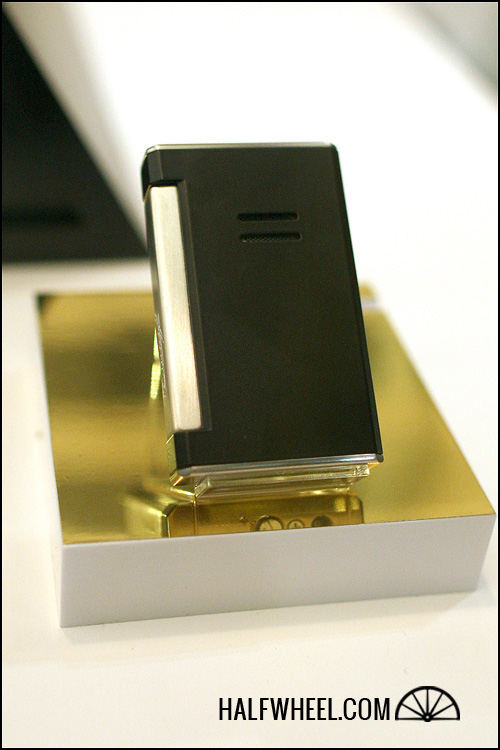 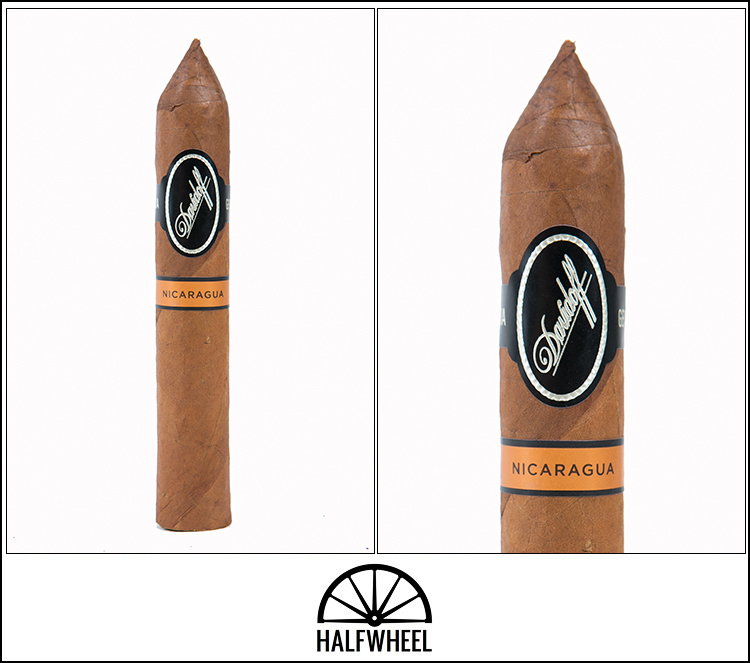 The Belicoso has a lighter brown wrapper with a slight reddish tint. It’s very even colored, with hardly any variation to it at all. To the touch, the wrapper is smooth but feels delicate and a little on the drier side of things. It comes to more of a point than I’m used to seeing on other Torpedo shaped heads. The foot of the cigar looks woefully under filled, but from the feel of the rest of the cigar, it’s only the very foot that’s like that. The black Davidoff band with the orange-gold Nicaragua band gives the cigar a classic Davidoff look while still distinguishing it easily from the rest of their lines. With a deep inhale, the notes I get from the wrapper consists of grass, fresh hay and a barnyard aroma that gives the entire cigar a very fresh profile. Clipping the cap and taking a cold draw, I get notes of creamy vanilla along with more grass and fresh hay.

The first third of the Davidoff Nicaragua Belicoso starts off with an incredibly creamy profile consisting of earthy notes, a mild spice and just the slightest bit of pepper. A few draws in I get some sweeter woodsy notes as well, adding nicely to the profile. The smoke production is quite light while the draw is a little tighter than the appearance of the foot would have suggested. The burn is just slightly off, tunneling a little ways in before the rest of the burn line catches up. As I thought earlier, the wrapper proves to be quite delicate and with just a little bit of moisture from my mouth, the wrapper around the head of the cigar has developed a small tear. Though nothing that really bothers me overly much, it is a good warning for later when I’m removing the bands. 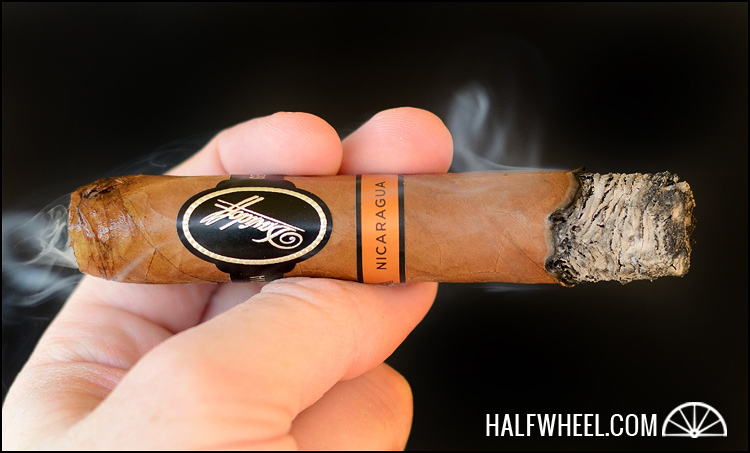 Transitioning into the second third, I’m still getting an extremely creamy profile with a new nutty note added in that’s a mix of hazelnut and pecan. The pepper hasn’t developed at all, staying as a background note — not something I’m used to from a Nicaraguan puro, but definitely at a level I would expect from a Davidoff. The crooked burn from earlier has evened up significantly after a tiny touch up and has remained even since then. I also see the slightly tight draw from earlier opening up and subsequently the smoke production has increased significantly. The final third of the Belicoso has finally moved away from the creamy and sweet profile of before. There is still the same enjoyable profile from earlier, with earth, the mild spice, nuts and a tiny bit of pepper. The notes however are slightly muddled and not as crisp as I was experiencing before. The final bit of the cigar transitions into a slightly bitter profile, which contrasts sharply with the sweeter profile from earlier. Still, the cigar was smokeable until the last little bit, even with a bit of difficulty keeping the wrapper from splitting any further. While the Nicaragua is not just another Davidoff, it's also not that different. The flavor profile is distinctly Nicaraguan, though smooth, mild and lacking that peppery kick that we might have come to expect from most other manufacturers. The flavors of the Belicoso were enjoyable and despite a few issues with construction on one sample, overall the construction was very good. While the Belicoso wasn't my favorite size of the line, I still enjoyed it and would happily smoke more of them. If your tastes run towards the expensive, I could easily suggest seeking one of these limited edition humidors filled with these Belicosos. The good news for the rest of us however, is that the profile is fairly consistent with the rest of the line. So, if the profile sounds enjoyable, you can easily find the rest of the line in stores now.