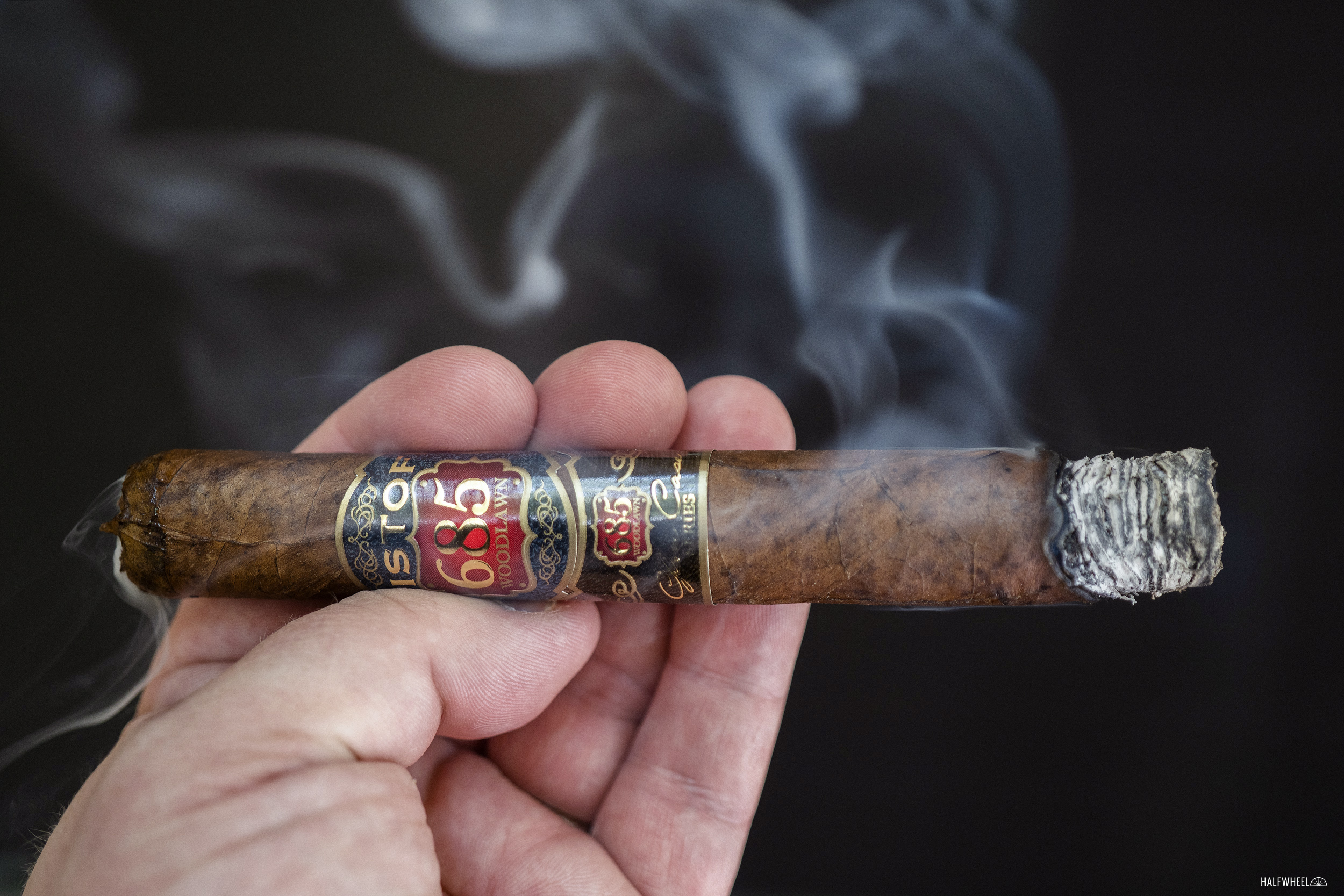 In May 2013, Kristoff released the first vitola in a new limited edition that was initially sold exclusively to members of the Tobacconists’ Association of America (TAA.) Named 685 Woodlawn, the cigar debuted in a 6 1/2 x 60 perfecto vitola with the first 1,000 boxes sold to TAA retailers, while another 1,000 boxes were released at that summer’s IPCPR Convention & Trade Show.

If you are unfamiliar with the particulars of what the TAA is, Charlie Minato described the organization:

Earlier this year, Kristoff announced there would be a new vitola in the 685 Woodlawn line that would only be sold to TAA retail members, specifically a 6 1/4 x 54 box-pressed toro with an MSRP of $12 before taxes. Only 800 boxes 10 cigars were rolled at the Charles Fairmorn Factory in the Dominican Republic and the new cigar began shipping to retailers in April.

Blend-wise, the newest vitola in the 685 Woodlawn line is the same as the first release, specifically a Brazilian wrapper covering a binder from Nicaragua as well as filler tobaccos grown in Nicaragua and the Dominican Republic, with a portion originating from undisclosed locations. Visually, the Kristoff 685 Woodlawn Box Press Toro TAA 2021 features a number of things that make it quite distinctive, including three bands—the foot band is printed with the TAA logo—a curled pigtail on the cap, and a covered foot. The mottled reddish-brown wrapper is sandpaper rough to the touch and features an abundance of oil, while all three cigars are almost alarmingly spongy when squeezed. The aroma from the wrapper is a combination of creamy oak, leather, earth and generic nuts, while the foot brings notes of espresso beans, cinnamon, creamy wood, peanuts and more earth. The cold draw features flavors of strong peanuts, leather, oak, sweet hay, dark chocolate sweetness and a bit of black pepper.

Staring out, the Kristoff quickly ramps up with main flavors of dried tea leaves and oak, followed closely by earthiness, salted peanuts, hay, ground coffee beans, cinnamon, and a touch of cocoa nibs. There is a nice amount of maple sweetness on the retrohale as well as some a slight spice on my tongue and a small amount of black pepper. Construction-wise, the burn is not exactly razor sharp so far—albeit not even close to bad enough to warrant being touched up—and the draw is excellent after a straight cut, while the smoke production is massive coming off of the foot. The body is medium while the strength seems to be climbing slowing from its start near the mild mark, hitting a point about halfway between mild and medium by the end of the first third.

Although the dried tea leaves note sticks around, it is replaced as a main flavor by a massive cocoa nib flavor combined with creamy oak as the second third of the 685 Woodlawn Box Press Toro begins. Secondary notes of bitter espresso, baker’s spices, earth, hay, cinnamon and peanuts flit in and out in various amounts. While the spice mixture on my tongue totally dissipates by that halfway point, the retrohale remains full of both black pepper and maple sweetness that only seem to be getting stronger. In terms of construction, the draw continues to impress and the smoke from the foot continues to be at a level that is well above average, but the burn becomes problematic enough to need some quick attention from my lighter just after the halfway point. Strength-wise, the Kristoff ends the second third just a bit below medium but is still increasing, albeit slowly. The combination of cocoa nibs and creamy oak continues to take the top spot in the profile during the final third of the cigar, followed by flavors of espresso beans, gritty earth, anise, hay, peanuts and leather tack. The maple on the retrohale remains strong until the end, but the black pepper on the retrohale diminishes noticeably, almost totally disappearing by the time I put down the nub. Thankfully, the burn has evened up nicely and the draw remains impressive, but the smoke production has seemed to fall off of a cliff. Finally, the strength does feature an increase—albeit not as much as I thought it would—hitting a point just past the medium as I put the nub down with a little less than an inch remaining. This is one of those rare reviews where the final score is incapable of telling the whole story. In this case, it's due to the massive point deductions taken off for constant relights on one sample that had major issues with some of the tobacco in it. Even with those construction problems, the flavor profile did not seem to suffer as much as I would have expected, and the other two cigars I smoked had none of the same issues. In fact, those other two samples were very, very good, with main flavors of cocoa nibs and dried tea leaves as well as a maple sweetness on the retrohale and extremely good balance. Although the one problematic sample was a frustrating experience leading to the score you see above, the Kristoff 685 Woodlawn Box Press Toro TAA 2021 at its best is a cigar that is well worth tracking down for yourself.