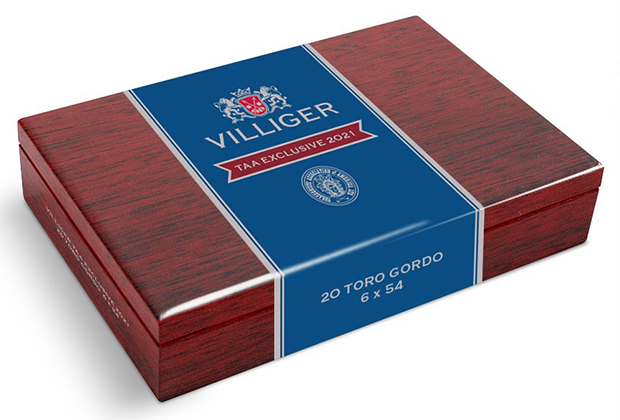 Villiger Cigars North America has announced that it will be offering an exclusive cigar to members of the Tobacconists’ Association of America at the group’s upcoming virtual meeting on March 23.

The Villiger TAA Exclusive 2021 is a 6 x 54 toro gordo that uses an Ecuadorian habano wrapper, while the binder and filler are both Dominican. Rene Castañeda, president of Villiger Cigars North America, calls it a medium bodied profile. The cigars are being made at Tabacalera Palma, the Dominican factory owned by Jochy Blanco. Villiger had previously worked with Tabacalera Palma for the release of the Cuellar Black Forest in 2019 as well as the Villiger Connecticut Krēmē, Trill by Villiger and the Villiger Cabareté Maduro, which came out in 2014.

Production is limited to just 500 boxes of 20 cigars, a total run of 10,000 cigars, each of which has an MSRP of $9. The cigars are scheduled to ship to retailers in May.

The Tobacconists’ Association of America is a group of about 80 retailers that represent some of the country’s top tobacconists, along with approximately 40 manufacturers from the cigar industry. The association gathers annually to discuss issues facing the industry and retailers, networking and to sell a lot of cigars.

So far, Kristoff is the only other company to confirm that it will be releasing a new cigar for the TAA this year, the 685 Woodlawn Box Pressed Toro.

The TAA has also announced plans to hold an in-person event from Oct. 24-28 at Casa de Campo in La Romana, Dominican Republic. This is the 53rd year the TAA has held an annual meeting.