There have been many chapters in the attempt at trying to reinvigorate the company formerly known as Casa Fernández, itself formerly known as Tropical Tobacco. The most obvious change came in 2018 when the company rebranded from Casa Fernández to AGANORSA Leaf, a reference to the large Nicaraguan tobacco-growing operation by the same. But I’d argue things turned the corner in 2020, and did so with one cigar.

In January 2020, AGANORSA Leaf debuted its new Supreme Leaf cigar at the Tobacco Plus Expo 2020 trade show. It started with a single 5 x 52 box-pressed vitola made entirely of Nicaraguan tobacco, though with a blend that is described as “corojo 99 dominant.”

The cigar’s packaging didn’t look like anything else the company had put out to date thanks to a modern look and lots of contrasting colors. While the packaging was notable, I’d argue the more important part was that AGANORSA Leaf opted to restrict its release to its top accounts and limited the first shipment to just 500 boxes of 10 cigars. It made it clear that the cigar wasn’t a limited edition but that it would be released in limited batches throughout the year. By the time the second size began shipping in July, Supreme Leaf had developed a following that meant demand was clearly outpacing supply.

As such, it was no surprise when the company announced in late 2020 that a third size would be added, a 6 x 46 corona gorda. It shipped to stores in February 2021 alongside the new Rare Leaf line, which seems like a follow-up to Supreme Leaf, albeit with an entirely different blend.

In a sign of just how popular the Supreme Leaf got during its first year on the market, AGANORSA Leaf shipped 2,000 boxes—four times the Robusto’s original allotment—as part of the debut shipment for the new Corona Gorda size. 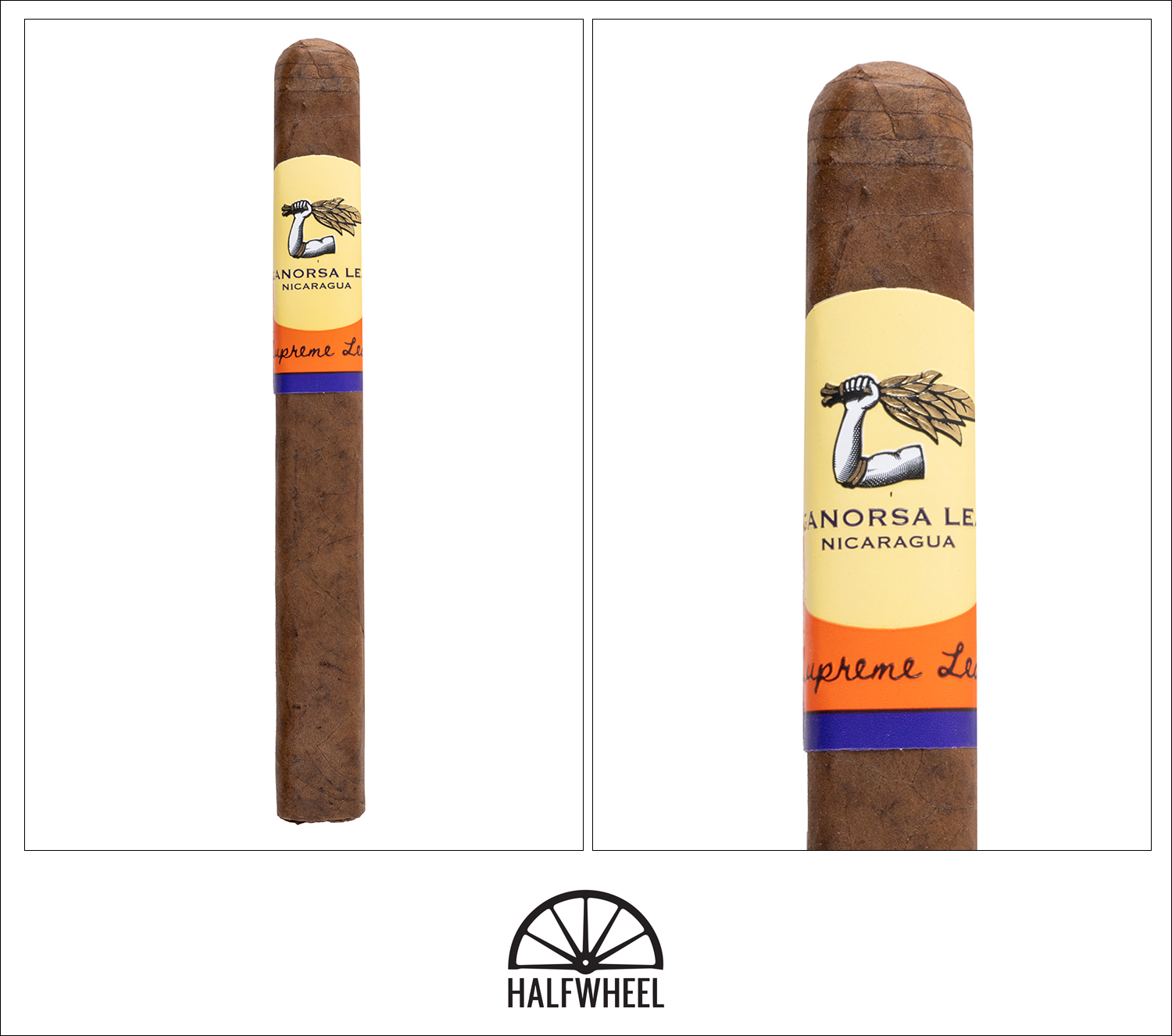 Even with the somewhat thinner ring gauge, the wrapper itself has quite a bit of texture on it, which isn’t always obvious. I think that the aggressive box press probably helps to accentuate this feature as the cigar provides four defined panels. The aroma from the wrapper is medium-full and smells like many other AGNAORSA-made cigars before it. There’s a dominant mixture of red pepper and cocoa on top of some barnyard and acidity. The covered foot is a bit milder and provides leather, barnyard, sweet cocoa, creaminess and earthiness. Unlike the wrapper, the aroma from the foot is rather balanced. Cold draws have chocolate, creaminess, an artificial lime flavor, and some crackers.

Just like the Supreme Leaf Corona Gorda smelled like an AGANORSA cigar, the first puff tastes like one. There’s earthiness, toastiness, dark chocolate, white pepper and a burnt meat sensation. After 15 or so minutes, the chocolate is gone, but otherwise, the flavor is pretty similar to the first puff though there’s an added creaminess. The earthiness defines the profile, though red pepper and white pepper add some interesting contrasts. The finish has the artificial lime flavor—a lime flavoring that reminds me a bit of lemonade from a local Thai restaurant—with white pepper, earthiness and creaminess. Retrohales are interesting thanks to a balanced mixture of cinnamon, tea and creaminess. The finish has a contrast between various pepper flavors and creaminess and the aforementioned lime flavor. Flavor is medium-full, body is medium-full and strength is close to medium-full, though probably more like medium-plus. The draw is a bit tight, but I make it through the first third without any burn issues.

While it’s not the most potent flavor in the main profile, the most noticeable flavor is the artificial lime sensation. It just has a way of cutting through everything else and is a lot easier for my palate to detect. The strongest flavor is earthiness, followed close by nuttiness. Red pepper remains at a similar level to the first third, but it too has a way of making it easier to identify even if it’s not the strongest part of the profile. The cigar finishes with a very balanced mixture of cinnamon, black pepper, lime, nuttiness and creaminess. Retrohales delivers blasts of red pepper on top of acorns, a generic nuttiness and mustard. After retrohaling the Supreme Leaf, I’m left with nuttiness on top of creaminess and cinnamon. That nutty flavor seems to continue to build for days, or at least for the 90 seconds in between puffs. Flavor is medium-full, body is full and strength is medium-full. Much like the first third, the draw is too tight and in each cigar’s second third I need to make a touch-up to help with smoke production. With less than two inches remaining, the Supreme Leaf Corona Gorda seems like it has had enough. The flavor turns to a mixture of earthiness, toastiness, red pepper, leather and creaminess. It’s not bad, but it lacks any of the excitement that was present in the first two thirds. The finish is more or less a game of musical chairs from the initial flavors; in this case, the surviving participants are earthiness, toastiness, red pepper and leather—so, sorry creaminess for losing out on a seat. Retroahles add some nuttiness to that mixture, though the larger change is that the pepper is greatly reduced. That is at least until the finish, which sees the red pepper build quite a bit and some toastiness linger around. I suppose if this was the end of my evening, this would be a fitting conclusion alongside a glass of a brown spirit, but it is a bit of a lackluster ending. Speaking of lackluster, the draw issues don’t get much better and I’m once again touching up the cigar to keep it burning until the end. All that said, the cigar never gets hot and if you want to nub this down to the half-inch mark, it’s doable, just keep your lighter around. After smoking three Supreme Leaf Corona Gordas, the only conclusion is that this isn’t the right size for the blend. The draw issues are what they are and are unrelated to the blend itself, but they are an unavoidable part of my thoughts on this cigar. Beyond that, the flavor seemed a bit less lively than the other two Supreme Leaf sizes I’ve smoked. Furthermore, I really wonder if the burn issues are related to the draw or if it’s a consequence of this blend in a thinner ring gauge. While I wasn’t making notes when I smoked the other sizes, I certainly don’t recall this sort of issue. Unfortunately for the Supreme Leaf Corona Gorda, while the flavor might get better with time, the draw is what it is. Perhaps other boxes or batches will address the draw, but if I’m forced to choose today, I’ll take Supreme Leaf Toro over the Robusto with the Corona Gorda in a very distant third.