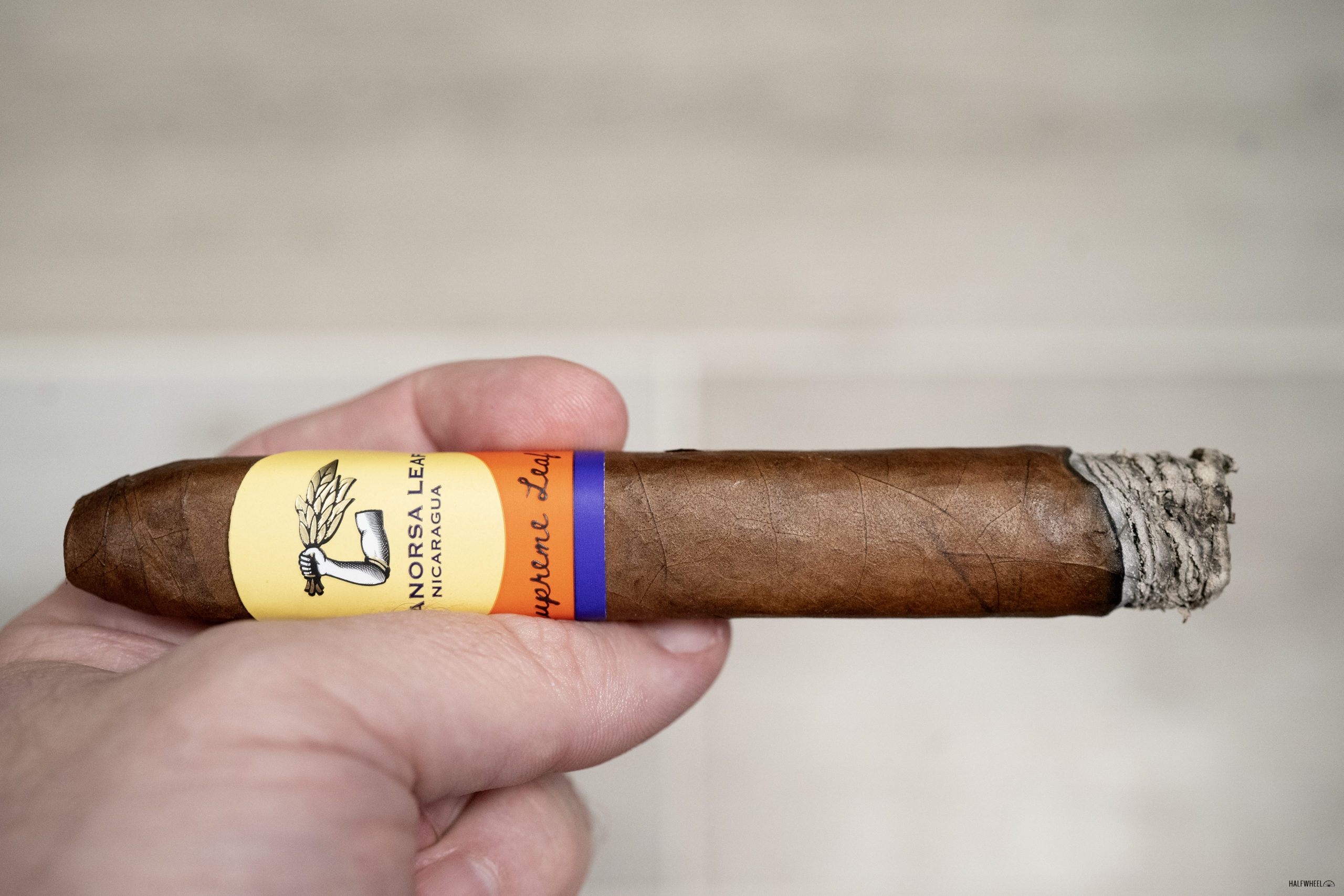 It would be interesting to take a poll of cigar companies and brands and ask them about what they think their company’s single strongest suit is. I’m sure some would say things like vertical integration, their history, their marketing, the charisma of a certain person that is the face of the company, and so on. Certainly, some would say their cigars, and some would say their tobacco. One of those companies, and seemingly the one to really push their proverbial tobacco chips forward is AGANORSA Leaf.

Beyond being a cigar producer, the company is a major grower of tobacco in Nicaragua and as part of a rebranding launched in April 2018, the company has been featuring its tobacco more and more, from the logo to the names of its cigars. Most notably, a line that the company began teasing towards the end of 2020: Supreme Leaf.

After debuting in a robusto vitola, the company has steadily been adding sizes in the line’s first year-and-a-half on the market. At the 2021 PCA Convention & Trade Show, AGANORSA Leaf added a fourth vitola to the line, a 6 x 54 box-pressed torpedo. Like the other sizes in the line, it is a limited production item, with the initial run limited to 2,500 boxes of 10 cigars that are made at Tabacos Valle de Jalapa S.A. in Estelí. They began shipping in August 2021 and come with an MSRP of $10.90 per cigar. The blend is a Nicaraguan puro that is described as corojo dominant, though specifics have not been made public. As for the reason to release the torpedo size, “demand for Supreme Leaf continues to grow,” said Terence Reilly, vp of sales and marketing for AGANORSA Leaf. “This latest vitola brings the blend back to the 54 ring gauge of last year’s toro but the tapered head channels the smoke to provide a little more intensity.” The first thing I notice about the Supreme Leaf Torpedo, even before sliding the cigar out of the cellophane, is that the band seems to be placed fairly high up on the cigar, or at least the arched top part seems closer to the torpedo’s pointed head. A quick calculation suggests it will be even more so once I cut the head, but more on that later. Next, I notice the wrapper has a slightly oily and very smooth feel on my fingers, a feel I am still trying to find a more common item to compare it to, yet keep coming back to the feeling of gliding my fingers over certain candles. There’s no tooth to the cigar, and what veins it does have are quite small. Two samples are firm, a tick or two firmer than a typical box-pressed cigar, particularly because of what feels like a very firm core, while the third is downright hard. Construction looks good, with flat seams and generally well-constructed heads, though the occasional variation in shade reveals the intricate cuts needed to create the torpedo, which always seem visually best when hidden. The covered foot has aromas of mixed nuts, and in particular the kind of smell I associate with the bottom of a can when you’ve got the flaky outer skin of certain nuts. In addition to that, I find samples a light aroma that reminds me of a bowl of citrus fruits, which has some complexity since no individual fruit stands out, baking spices, as well as something that makes me think of a cool glass of non-dairy milk. Air moves freely but not loosely on the cold draw, with a flavor that is somewhat creamy, though it’s not overly sweet, nor is it peppery, traits it shares with the aroma.

Two of the Supreme Leaf Torpedoes I smoke start off with a clean, peppery profile that is medium intensity on the palate but a bright and tingly full on my first retrohale. I’m surprised by how light the flavor notes are at the start: there’s earth and more mixed nuts, but none of them way heavily on the taste buds. Not every sample shares the same level of lightness, exhibiting a profile that is richer with earth, but none get into a truly heavy profile, though the smoke of one is much more textured and pointed than the others. Either way, it’s a start that is assertive but not aggressive, both engaging and welcoming the senses to the experience, and one that in certain puffs merits the description of being elegant. After the first clump of ash drops, I pick up a very a bit of vanilla pudding that adds just a touch of sweetness and creaminess to an already very good blend. The same cigar that started more vibrantly continues that through this section, largely by way of a more pronounced cedar and a related flavor that I can’t quite pin down, other than it has a sharper effect on my taste buds. Flavor is generally a very refined medium that can notch up to medium-plus at times, body is medium and strength isn’t quite medium. Construction and combustion are both near perfect. I continue to be very impressed by the smoothness of the flavor as the Supreme Leaf Torpedo gets into its second third. There’s a bit of creaminess guiding the profile but I wouldn’t call it an inherently creamy profile; rather it’s an addition to a profile that’s guided by earthiness and a building black pepper. When the pepper is back, it is quite vibrant, and like in the first third, there’s a more intense experience waiting for me in the retrohale. While the specifics are different, there is a bit of a wasabi sensation, almost as if the pepper is opening up my olfactory nerves and my sinuses, a stark contrast to other cigars where pepper can feel more combative. I run into some combustion issues in the final puffs of the second third that necessitate a relight, while the burn line begins to get a bit uneven. This section closes out with a heavier black pepper both on the palate and through the nose, kicking the profile up to medium-full while body is medium plus and strength is medium at most. The final third of the first Supreme Leaf Torpedo samples gets a bit funky, a very noticeable change after how smooth the first two thirds have been. While the earthiness and pepper have gotten a bit heavier, there’s now chalk and a sour flavor that leads me to check the head of the cigar. Sure enough a bit of a brown streak appears on my thumb, indicating some tar could have joined the profile. I snip off as little of the head as I can and it seems to resolve the majority of it, though it seems I could still take a bit more off. Thankfully the tar issue is isolated to the one cigar, and when it’s not there, the cigar now offers a much richer, earthier profile that is notably different from the first two thirds but equally enjoyable. The black pepper increases and then drops back in the profile a bit, which opens up some space for a new woodiness to join the profile as the burn line moves through where the band would be. The Supreme Leaf Torpedo finishes up on a slightly more robust note as the wood and almonds begin steering the profile, bringing the earth and pepper along with them while shedding the earlier creaminess. It has a profile that hits my palate much the same way a good Scotch whisky served neat does, and for the first time seems to be calling out for a beverage with which to pair it, particularly due to a lingering pepper sensation. Flavor finishes medium-plus, body is medium-plus, and strength is just getting into medium territory. There is the occasional need for a relight, but on the whole combustion and construction are both quite good, offering an easy draw, plenty of smoke, and a burn line that self corrects when it occasionally goes askew. When I first smoked the Supreme Leaf Robusto, I liked the cigar but felt it had a way to go before it seemed to match up to its lofty name. I don’t know what has happened between now and then, but the Supreme Leaf Torpedo is much closer to the first word in its name. The flavor profile is smooth, complex and balanced, while also being palate stimulating and maintaining a steady progression from start to finish. The construction is also quite good with just an occasional combustion hiccup in the second halves of the samples. This is simply an outstanding cigar that is worth smoking as soon as you can, as well as stashing some away to see how this already enjoyable flavor profile develops with time.