Continuing with the ever popular Cuban Edición Regional series, Ramón Allones. The first release of the year is a Ramón Allones Belicoso for the Alemania region, i.e. Germany.

According to cubancigarwebsite.com,”the tobacco blend for this German Regional Edition is made with specifications from the 1950s. The first old style Havana cigar made in decades.” The cigar is your basic, typical looking belicoso. It sports a nice Colorado shade wrapper with just a couple small veins and is nice and firm. There are no soft spots anywhere. On the pre-light aroma I get a nice nuttiness with a nice sweet cedar smell. From the pre-light draw I get a nice flavor of chocolate and cedar.

During the first third, the cigar opens up nicely. I got a nice mix of coffee and nuts flavors with a nice floral note through the nose on the finish. The finish is really long with the flavors just seem to linger on my palate forever. The draw has the perfect amount of resistance. In the second third, the coffee and nuts flavors are still in the forefront followed by a touch of chocolate mixed with that floral note from the beginning. The Belicoso is very smooth and mellow and it is quite easy to smoke.There is also a massive amount of thick white smoke. The burn is razor sharp and the ash holds for about and inch and a half at a time. 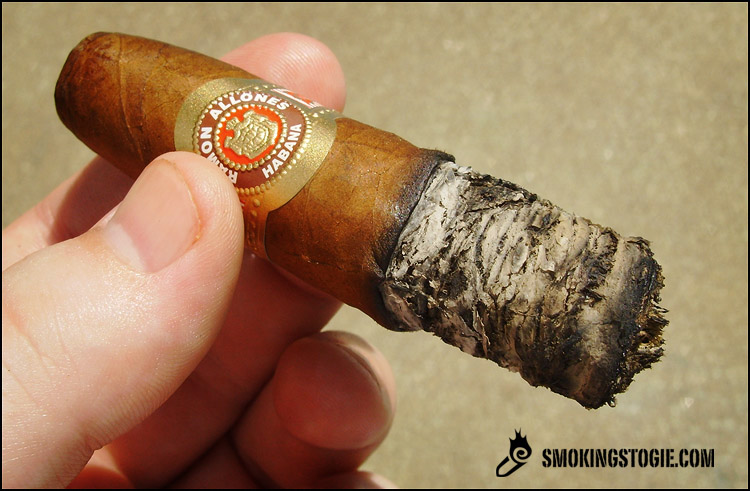 Coming into the final third, the same flavors are present but seems amped up. The coffee flavor has changed into a dark roasted coffee bean flavor, almost an espresso like flavor. The chocolate flavor has changed into a darker richer chocolate flavor. The nuttiness is still present but very faint. It’s being shadowed by the bold flavors of the coffee and chocolate but is still present adding to the complexity. The finish still seems to on forever. I really enjoyed this cigar and it solidifies my opinion that every Ramón Allones ER seems to satisfy. I can’t really comment on the fact that it was blended in a 1950’s style. It didn’t taste that much different than other Cubans. The flavors were very bold and in your face though and I do think this will age beautifully. At a relatively low price point, I think these are more than worth it.