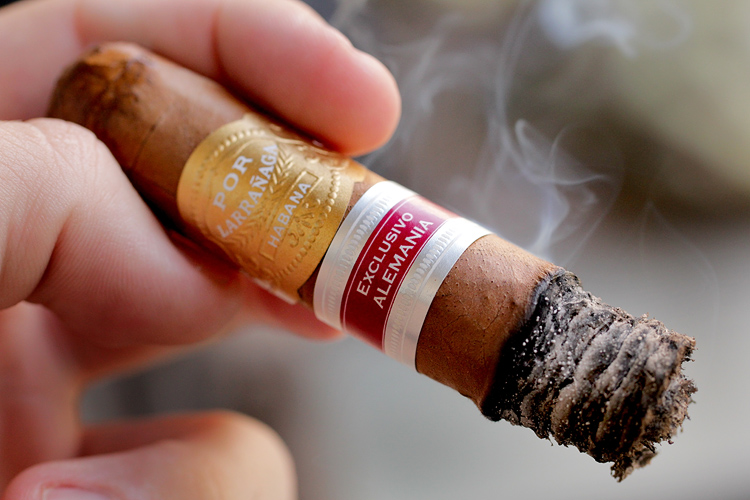 The Por Larrañaga brand traces its history to 1834, when it was registered by Ignacio Larrañaga, making it the oldest marca in the Habanos S.A. portfolio that is still made. It was also the first factory to make machine made cigars.

It is currently referred to as a marca local, a local brand with minor market share. The tobacco comes from the Vuelta Abajo region of Pinar del Río in western Cuba, with the range comprising light to medium strength cigars. According to the Habanos S.A. website, Por Larrañaga currently has just three regular production cigars:

Finally, the cigars generally use the marca’s main band with a second red and silver band that indicates the region it was made for, in the format “Exclusivo ___” with the region’s name in Spanish. Neither Por Larrañaga nor Alemania was part of the inaugural group of Edición Regional cigars in 2005 – Italy and Switzerland each got a Punch and Ramón Allones release that year. However, since 2006, Por Larrañaga has seen 11 regional releases:

*The Legendarios has not yet been released and is expected to ship in April of 2012.

The brand’s 11 releases are a respectable number, but nowhere near the 20 that both Ramon Allónes and Bolivar have had or the 18 Punch releases. Juan Lopez has also had 11 releases with no other brand having more than seven.

Germany has received nine regional release through their distributor, 5th Avenue, again a respectable number, but it trails the Asia Pacific region’s 11 releases and Switzerland’s 10 releases. It is tied with France’s nine releases.

There were a limited amount of 250 humidors that contained 25 of the Por Larrañaga Alemania and the Ramón Allones Belicosos, the other German Edición Regional:

The boxes of the Por Larrañaga Robustos look like this:

The pre-light aroma varies between a surprisingly sharp, cool note reminiscent of a Saltine cracker, though not as salty, and a graham cracker with just a touch of sweetness. There’s little to no spice to be found here or on the cold draw, which repeated the notes found through the nose while adding a hint of plain popcorn. The draw ranges from good to a bit firm, despite the cigar being fairly soft and having some give up and down its length. As is common with standard production Cuban cigars,the wrapper is toothy with the less than perfectly smooth texture. The softness hinders getting a clean cut, as the cigar pinches when clipped.

The first third puts out lots of mild, creamy smoke with underlying notes of peanut, cracker and bread. There’s just the faintest zing on the tongue, but it’s not enough to be challenging except to the most sensitive of palates.

The strength picks up a bit in the second third with notes of wood adding fullness to the flavor, though the Por Larrañaga is still firmly mild to mild-plus as far as strength. There hasn’t been any burn issues to this point in any of the cigars; fairly straight burn lines, no relights needed and ash that hangs on decently. There are points where the cigar seems like it’s going to finally open up flavor-wise, either through a hit of pepper or a flavor shift, but it never happens. If anything, the front of the tongue gets some increased sensation through a bit more spice, but it’s about the only part of the palate or nose to really get engaged.

Entering the final third, not much has changed on the palate, though the sensation of the smoke in the nose has turned from a warm tingle to a sharp poke. A quick change in the breeze sent some of the ambient smoke right into my nostrils which warranted a fervent sinus clearing response. The fragile wrapper of the Por Larrañaga requires incredibly delicate removal of the bands to avoid cracking and the glue didn’t seem to be loosened by the cigar’s internal heat. An otherwise inauspicious finish wraps up the cigar without begging to be taken down to the nub.

The Bottom Line: The Por Larrañaga Robusto Edición Regional Alemania is a forgettable cigar. While the brand has started to see a bit of a resurgence, with the flavor profile this cigar delivered it’s easy to see why it dropped off in popularity over the past two decades or so. There is simply not enough there, both in strength or nuance, to make this a recommendable cigar. If the notes present had their intensity turned up even slightly, this would be a much different and much more enjoyable cigar in the morning or on a clean palate. But with its disengaging flavor profile, the Por Larrañaga Edición Regional Alemania isn’t worth the effort of finding unless you are simply a collector.