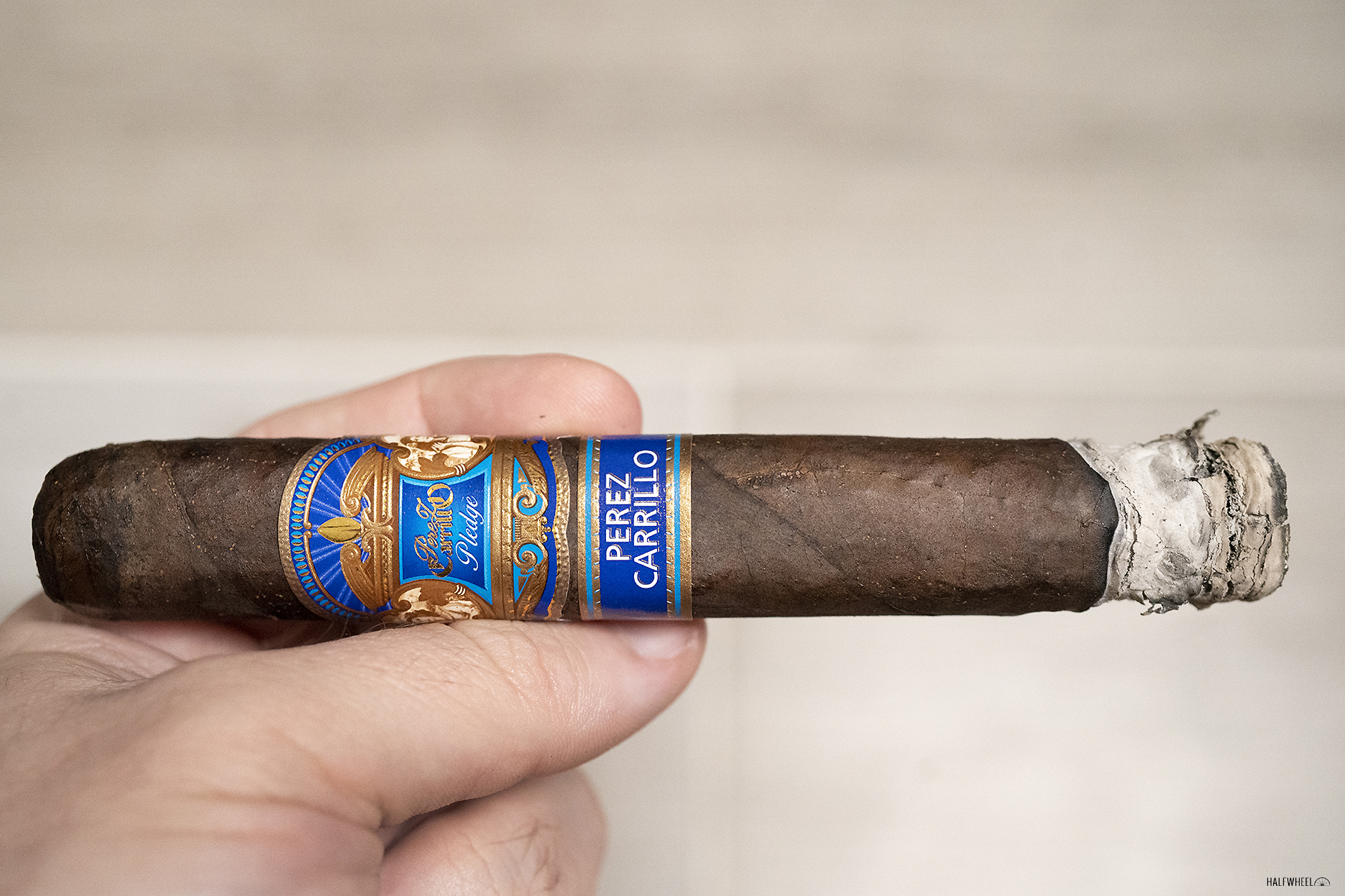 “I will never stop working with the best tobaccos and bringing new and innovative blends to you.” That quote from Ernesto Perez-Carrillo Jr. is what begins the webpage dedicated to the Perez-Carrillo Pledge, and seemingly a perfect introduction to this cigar.

After being announced in June 2020, the line debuted in September of that year in two vitolas: a 5 x 50 robusto called Prequel, and a 6 x 52 toro called Sojourn. After a successful first year on the market, the company decided to add a third vitola, calling it Apogee and releasing it at the 2021 PCA Convention & Trade Show.

Not only is Apogee the third size in the Perez-Carrillo Pledge line, but it is also both the thickest and longest of the options:

Like the other sizes, it uses a Connecticut habano wrapper, Ecuadorian binder and Nicaraguan fillers, and is offered in 10-count boxes. The Apogee is a limited edition size, however, limited to 3,000 boxes of 10 cigars, with individual cigars having an MSRP of $15. 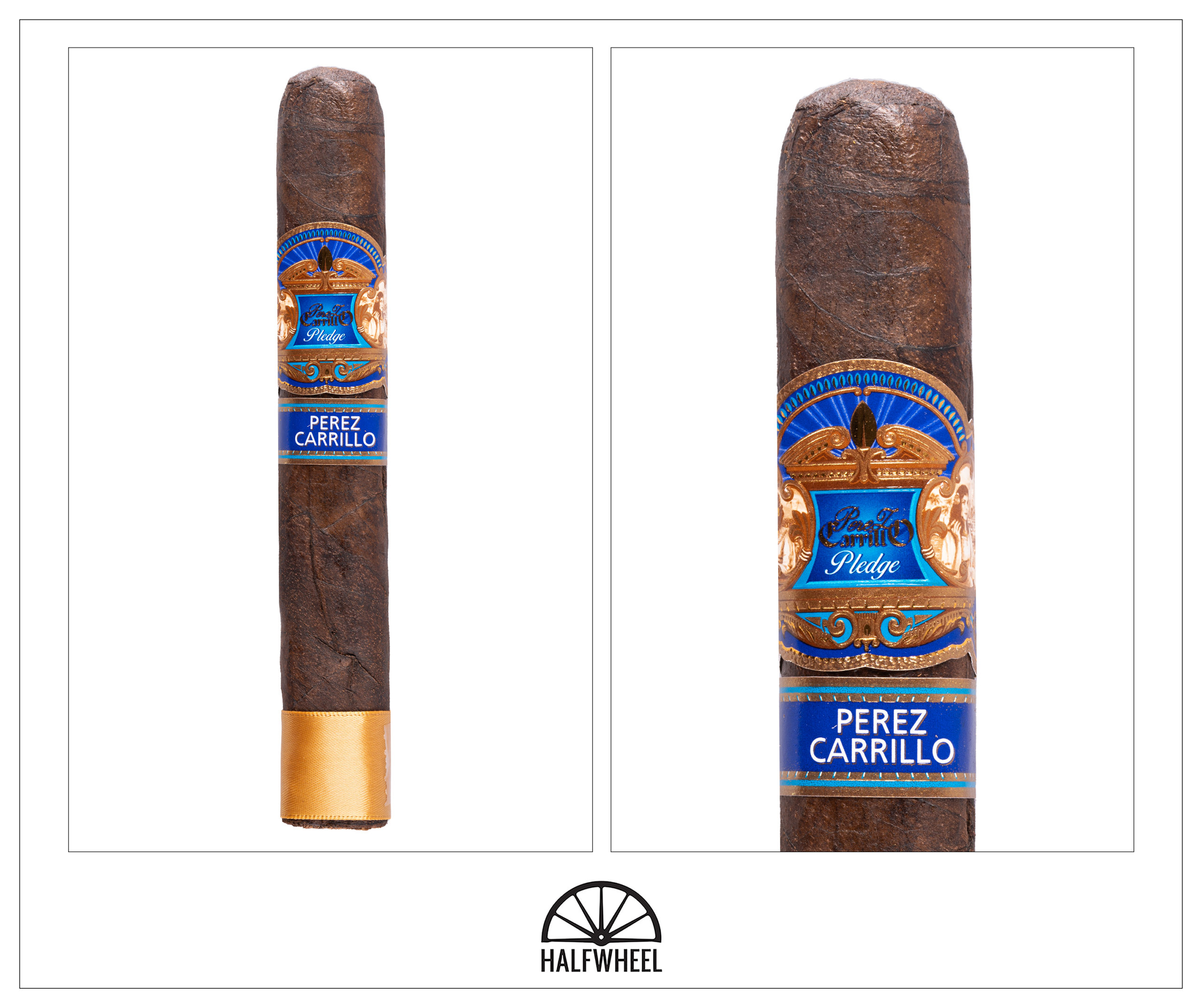 The wrapper of the Perez-Carrillo Pledge Apogee is quite dark, a shade of brown that is rich and vibrant thanks to some oiliness and mottling in spots. The veins are small, as is the tooth of the leaf when I notice it; I didn’t see it on the first sample, but the second has enough to catch my eye fairly easily while the third doesn’t have much. The cigars look like they are rolled and pressed well, and offer the typical box pressed firmness, meaning firm and pillowy front to back, less pillowy but still firm side to side. The foot has a light milk chocolate aroma, almost as if smelling an empty bag of chocolate chips or a cool glass of chocolate milk. There’s a bit of earth and black pepper behind that, though both are fairly mellow. There’s also a very faint bit of a syrupy spirit, maybe a cool cognac or brandy, without any heat of the alcohol itself. If anything, it’s a sweet and creamy aroma that has a bit of a peppery kick on the finish. The cold draw is smooth and just on the firm side of medium, with a mellow flavor profile that has some of the chocolate and that syrupy flavor, though both are less pronounced and more intertwined than in the aroma. There’s no real pepper to speak of, though the profile is drier than the aroma as I can taste undertones of dry wood, which partner quite well with a tingle I get on my lips from the wrapper.

For not offering any pepper before being lit, the Pledge Apogee starts off with a good amount of it, fairly middle-of-the-road in terms of intensity but capable of tingling the taste buds, while the tobacco itself tingles the front of my lips. The profile is a bit on the dry side out of the gate with an interesting combination of dry wood and bark, as well as a building pepper that is particularly vibrant on the retrohales. It’s also a bit hotter on the nostrils than average pepper; not in the sense of red chili peppers, but in the sense that my nostrils genuinely feel warmer with each retrohale. The burn line begins to go askew in the first inch, and, unfortunately, the front side of the cigar—the side we photograph—is the side that is lagging behind. Impressively though, the burn line seems to correct itself almost as quickly as it goes awry. There is a subtle but noticeable mellowing of the flavor as the burn line progresses, and when I preemptively knock the ash off around the one-inch mark, it’s clear that the profile is fuller bodied and creamier than earlier, still with decent pepper but not as overpowering as earlier. The earthy component feels a tick sharper, eliciting a bit more of a pointed physical sensation. Flavor is medium-plus, body is medium-plus, and strength is just shy of medium. Other than a slightly uneven burn line, there’s nothing about the combustion or construction to complain about. Flavor is medium-plus to medium-full, body is medium-plus, and strength is shy of medium.

As the second third begins, I’m finding my attention drawn to a subtle change in the profile that suggests the Pledge Apogee is going to turn a bit rougher in this section. The earthiness has more character, pepper is pivoting to elicit a more pronounced physical sensation as opposed to just a flavor, and the smoothness that I found in the first third seems to being backing out of the picture. A retrohale at the start of the second third reveals a big and bright profile, mixing white pepper, creaminess and just a little bit of chalk, and this nostril-filling and nostril-stimulating point is the high point of the cigar thus far. It’s also more of a nod to the first third, whereas the flavor seems to be looking forward. Approaching the midway point, the flavor has largely stayed the same but introduces a dry corn flake sensation, which is almost more noticeable for the physical sensation than the flavor. On that note, the cigar seems to be pushing to deliver as much sensation as flavor, as a retrohale just past the midway point does a good job delivers an impressive sensory experience. After that, there is a bit of light creaminess joining the profile, specifically reminding me of the liquid surrounding cottage cheese. As the second third begins to wrap up, I get what I think is a bit of cinnamon in the flavor; it’s been so long since I’ve had the stuff—I’m not a big fan of it in any form—but the heat and flavor are distinctive enough that my mind goes back to Red Hots and Hot Tamales candies for a moment. Thankfully—for my palate, at least—it’s a fairly fleeting flavor, and the profile gets back to an earthier, more pepper-forward that leans toward the robust side of the spectrum. This profile, occasionally accented by vibrant pepper found on the retrohale, takes the cigar to the end of this section. Flavor is medium-full, body is medium-plus, and strength is medium. Construction and combustion both remain very good. 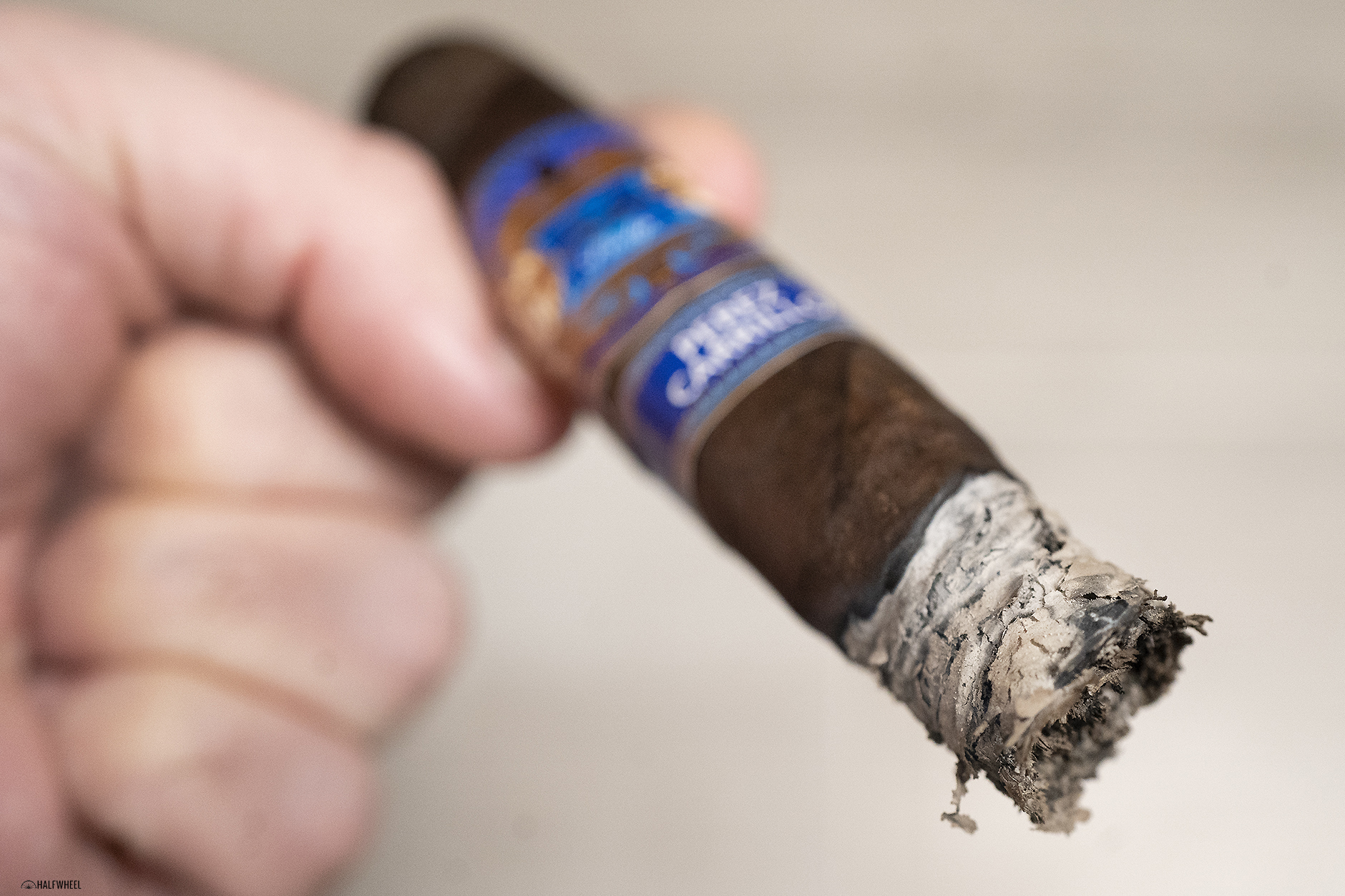 The start of the final third sees the Pledge Apogee get a bit richer and more complex by way of a flavor reminding me of chocolate syrup coming into the profile, though the profile doesn’t get noticeably sweeter. Were it not for the pepper, earth and dry wood, I’d make the case for a mocha made with a really earthy coffee. It’s a lusher flavor than what the cigar has offered thus far, and a welcomed change from the drier, more robust profile from earlier. An interesting development brings about a bit of peppermint both on the palate and through the nose, further adding to the complexity and the ongoing change the cigar is going through. The final puffs are highlighted by a chocolate brownie sweetness, a creamy sweetness, a diminished but still tongue-tingling pepper, and an earthy coffee on the finish. Flavor finishes medium-full, body is medium-full, and strength is medium. 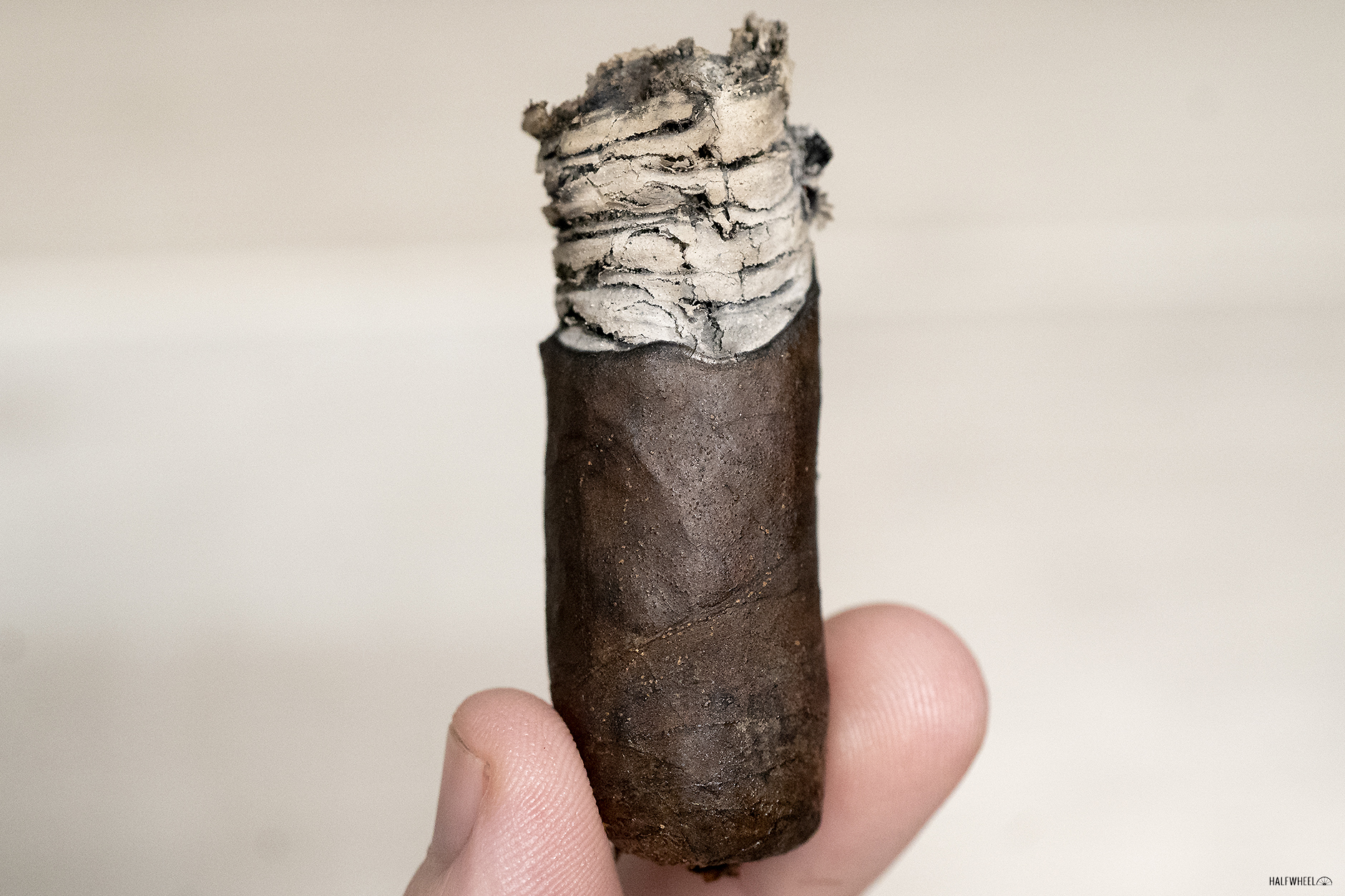 It seems I've been on a bit of a run of smoking new and thicker vitolas in existing lines lately, and the run has produced some good results. While I would generally pick the more slender of the options presented to me, in this case the bigger ring gauge seems to give the elements of the blend a bit more breathing room to shine, which results in an impressive complexity without necessarily diluting any of the flavor's key drivers. There is plenty of earth and pepper, but more importantly there are the accent notes: creaminess, chocolate, and yes, even that brief touch of cinnamon, and those are what make the journey from start to finish quite enjoyable, with the construction and combustion only helping that journey. If, like me, the Pledge didn't quite do it for your palate in the first two vitolas, this thicker ring gauge may just change your mind about what the line has to offer.