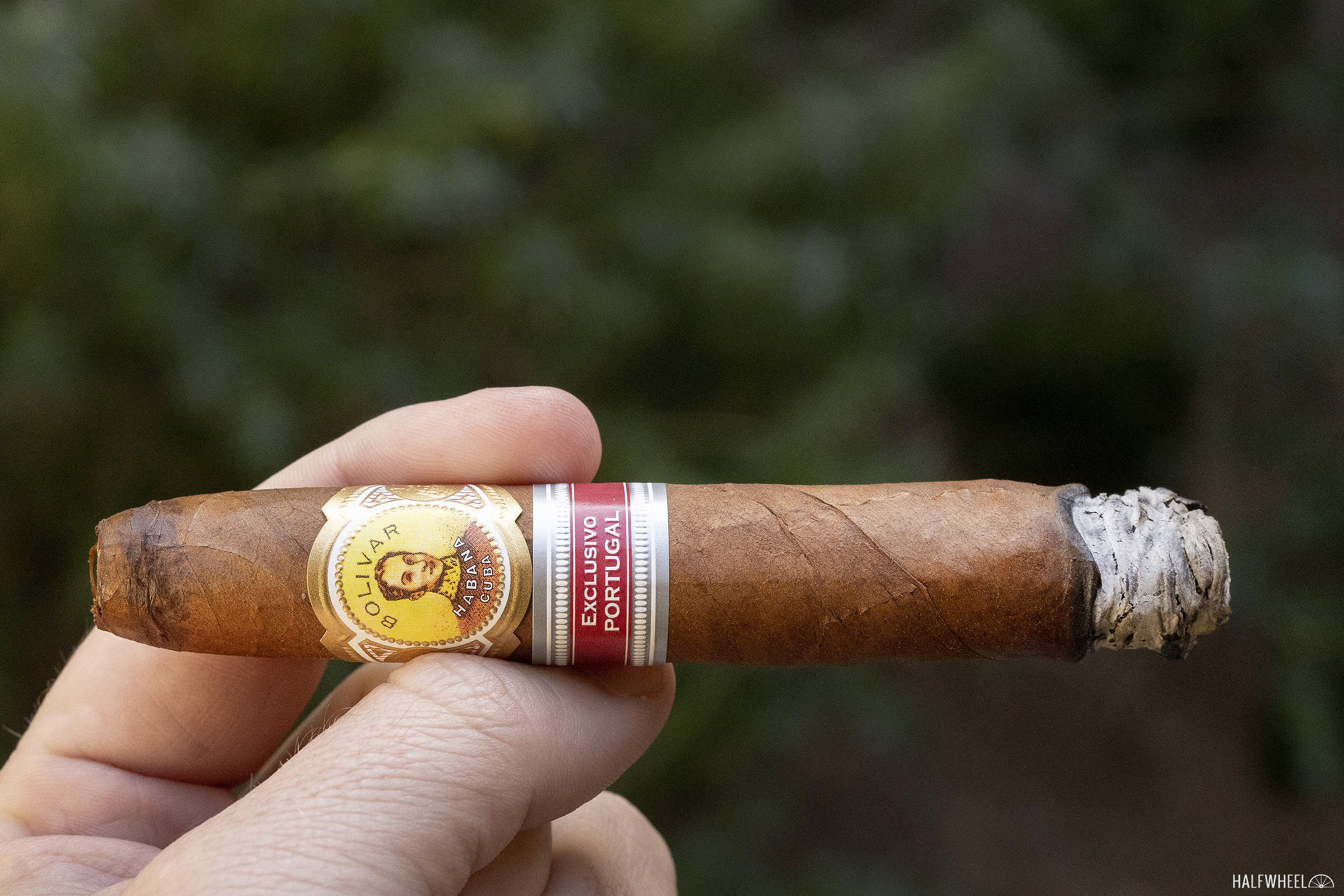 On April 12, 2018, Casa Havaneza in Portugal celebrated its 154th anniversary, which it proclaims makes it one of the oldest tobacco shops in the world. In fact, it’s so old that its original opening is in a bit of question; while 1864 is the recognized opening year, there are advertisements that suggest the store was opened in 1855.

Today, Empor S.A., the exclusive distributor of Habanos S.A. products for Portugal, operates four Casa Havaneza locations, three in Lisbon and one in Oporto. It was in Lisbon that a celebration was held in celebration of the store, and that means a new cigar was to be unveiled: the Bolívar Lusíadas. The night included the usual eating, drinking and celebrating, as well as a reading of “Os Lusíadas,” a piece of poetry recited by actor Pedro Giestas that was dedicated to the new Edición Regional. The cigar gets its name from the poem by Luís de Camōes, a 16th-century Portuguese poet considered by many to be the language’s greatest poet.

The cigar is a perfecto vitola called the Británicas Extra, which measures 5 2/5 inches (137mm) long with a 48 ring gauge, and has a slightly tapered head and foot, though the latter is a cut cleanly as opposed to coming to a point. It is a size that debuted in 2011 as an Edición Regional wearing the Bolívar band, and as should be inferred from the name it was made for Great Britain.

This becomes the fifth time that the vitola has been used, all of which have been for Ediciónes Regional: 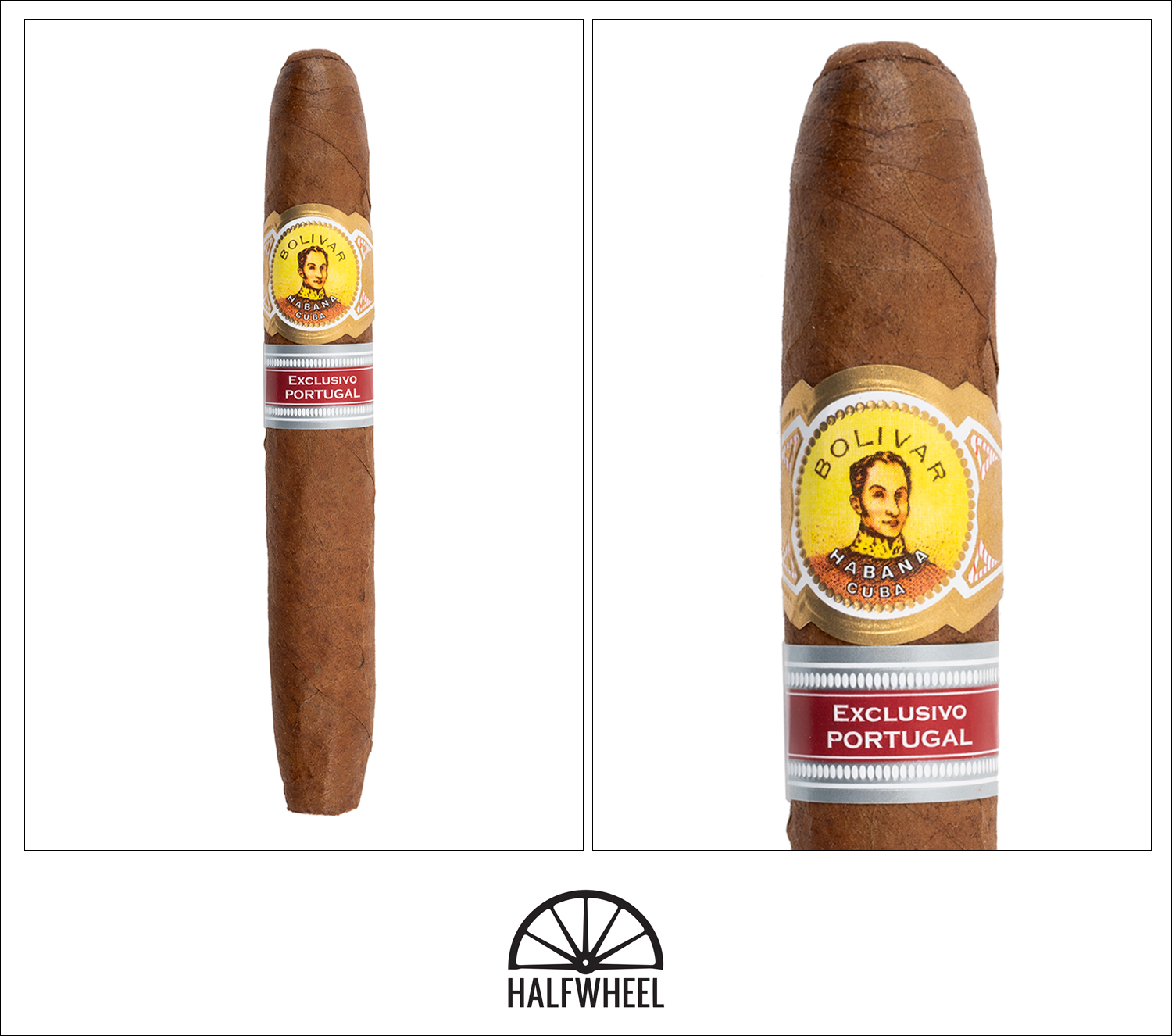 Seeing a Bolívar in a figurado vitola feels a bit odd; even if it might be best known for the Belicoso Fino vitola, I still consider that more of a parejo. This perfecto feels a bit small in the hand, but its listed 48 ring gauge is accurate by my measurements. The Lusíadas wears a much redder-hued wrapped than I generally think of for the brand or for cigars in general; there are samples that look like the clay-rich soil in which they were grown. The samples aren’t the most beautiful cigars I have ever seen, with wrapper leaves that have some fine grit toothiness, a good number of prominent veins, occasional mottling and a finish that looks a bit rustic, reminiscent of a cigar or purito rolled without a mold. The first sample is very firm, almost rock hard, which is concerning, and the other two are only marginally better. Even with the cleanly cut, flat foot, I’m not offered much in the way of distinctive aromas, and I practically have to shove the cigar into my nostril to get a light aroma of woods. Cutting the cap on the first cigar reveals a head that is over packed and very full, leading me to think I may need to resort to another snip or even a draw poker to open it up a bit. It, too, is stingy with any pre-light offerings, showing primarily a very tight draw.

From the moment I light up the first sample, my mind is preoccupied almost exclusively by the incredibly tight draw of the cigar, followed by how I’m going to manage to enjoy it and how long it’s going to take me to get through it. How much that’s affecting the flavor is uncertain, but through the first two samples I don’t find my palate getting anything of real consequence or enjoyment. There’s a bit of a generic tobacco flavor and some woodiness, with a bit of clay-forward earth at spots, but pepper and sweetness are almost non-existent. One sample has a bit of tangy wood at the beginning that flirts with sourness, which while being the most standout flavor doesn’t make it enjoyable. The draw really makes it tough to get much from the cigar, but in the one sample that is workable, there is a mix of clay, earth and wood that can be fairly enjoyable in spots.

I don’t find much change in the Bolívar Lusíadas as the burn line enters the second third; the draw is still concerning and frustrating, while the palate is left to try and amuse itself with a very nondescript profile that reminds me of the wooden crates used to store tobacco during processing. There’s a bit of white pepper emerging in the third and most smokable sample; it’s good on the palate but much more developed via a retrohale where the entire smoke is heartier and richer. There is some sour chalk that comes out around the midpoint, which doesn’t help anything but at least it shows the profile is doing something, something most applicable to the two cigars with draw issues. In an attempt to find anything of note from this Bolívar, I take a few more retrohales just before the final third begins and get an enjoyable hit of white pepper, showing that this cigar has something to offer even when the draw is incredibly frustrating. The draw is still tight, flavor is medium in intensity and ticking up slowly, while strength is below medium. 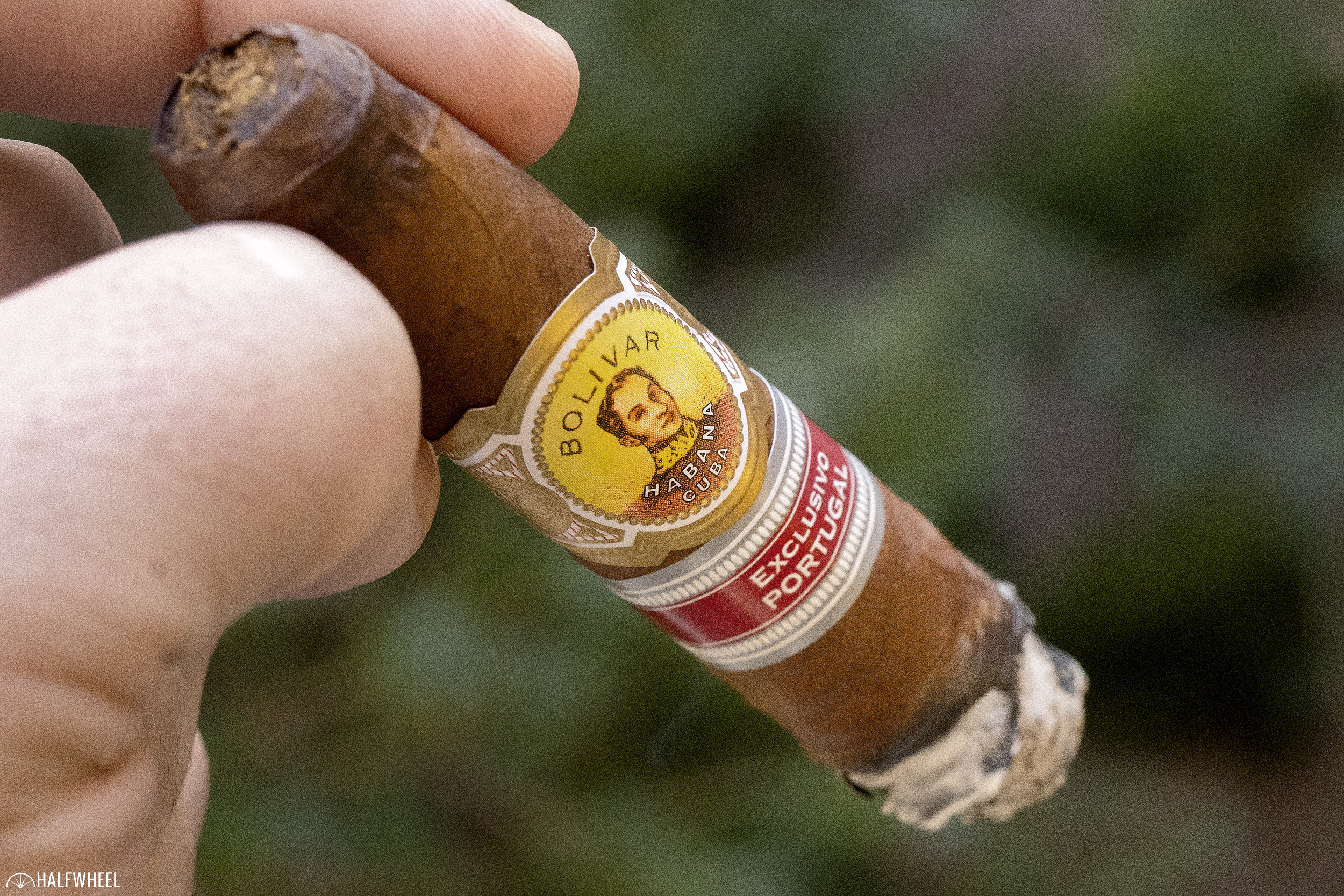 As the first sample has clearly shown, its draw isn’t going to get any better without some serious intervention, so I resort to taking a draw poker and boring right through the middle of the cigar, a move that drastically improves airflow, though by now it’s too little, too late when it comes to salvaging my impressions of the cigar, at least in the first two samples. The final sample was better but hasn’t shown much in the way of profile changes, still focusing on a dry tobacco taste with accents of woods, clay-forward earth and a bit of pepper. If anything, the order and intensity of the flavors in the profile have changed a bit, but only enough to merit a casual mention. At its best, the Bolívar Lusíadas is solidly average but enjoyable; at its worst, the draw has the cigar tasting bland and hardly worth smoking. 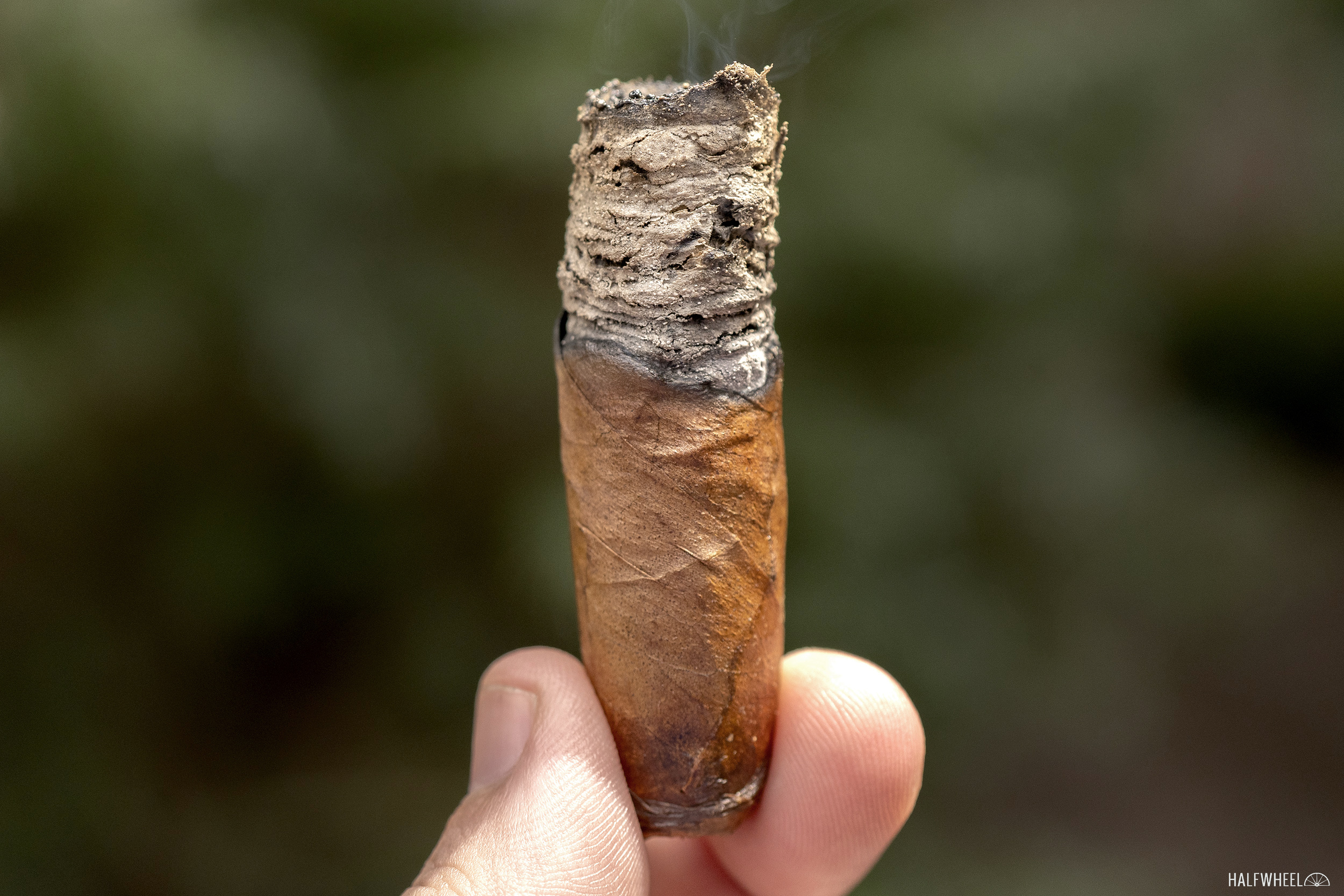 If you read the notes, you will undoubtedly know what earned the cigar the score it received. There have been jokes and comments about how badly plugged some Cuban cigars can be, and this is undoubtedly the worst I have experienced. The first cigar would have gone back and been exchanged could I have done so, the second might have as well, and the third was barely passable by current standards. The flavor didn't inherently hurt the cigar, but it certainly didn't earn it any points, with my experience with the three samples leading me to say you might want to try a single but I certainly wouldn't make it a priority. It's a shame that two of the three samples weren't given the opportunity to show what they could have been, as the technical performance resulted in three rolls of wasted tobacco.