In 2018, Alec Bradley Cigar Co. created its first brand using the Alec & Bradley moniker. Yes, it’s a bit much. When Alan Rubin decided to create a cigar company, his father told him to use a company name that began with an A so it would show up in the first part of the yellow pages. Rubin turned to the names of his two sons—Alec and Bradley—and called the company Alec Bradley.

That was more than 25 years ago and now his sons are both working for the company, the company that is named after them. In 2018, the company released the first project that was spearheaded by the sons, Blind Faith, the first of what is now about 10 different releases under the Alec & Bradley name.

Three of those lines are sold at retailers nationwide, the second of which is Gatekeeper. The blend uses an Ecuadorian habano wrapper covering a Nicaraguan binder and filler tobaccos sourced from the Dominican Republic and Nicaragua. It was originally produced at Ernesto Perez-Carrillo Jr.’s Tabacalera La Alianza S.A. factory in the Domincain Republic, but production moved to Plasencia’s Tabacos de Oriente factory located in Danlí, Honduras in July 2021 due to capacity issues at La Alianza.

It debuted in four vitolas, and no new sizes were added until earlier this year when Alec & Bradley announced that it was releasing a new sampler named the “Taste of the World Chunk.” That sampler contains eight cigars—two cigars of the four included blends—all in the same 4 1/4 x 60 petit gordo vitola known as the Chunk: Alec Bradley Black Market, Alec Bradley Magic Toast, Alec & Bradley Gatekeeper and Alec & Bradley Kintsugi. 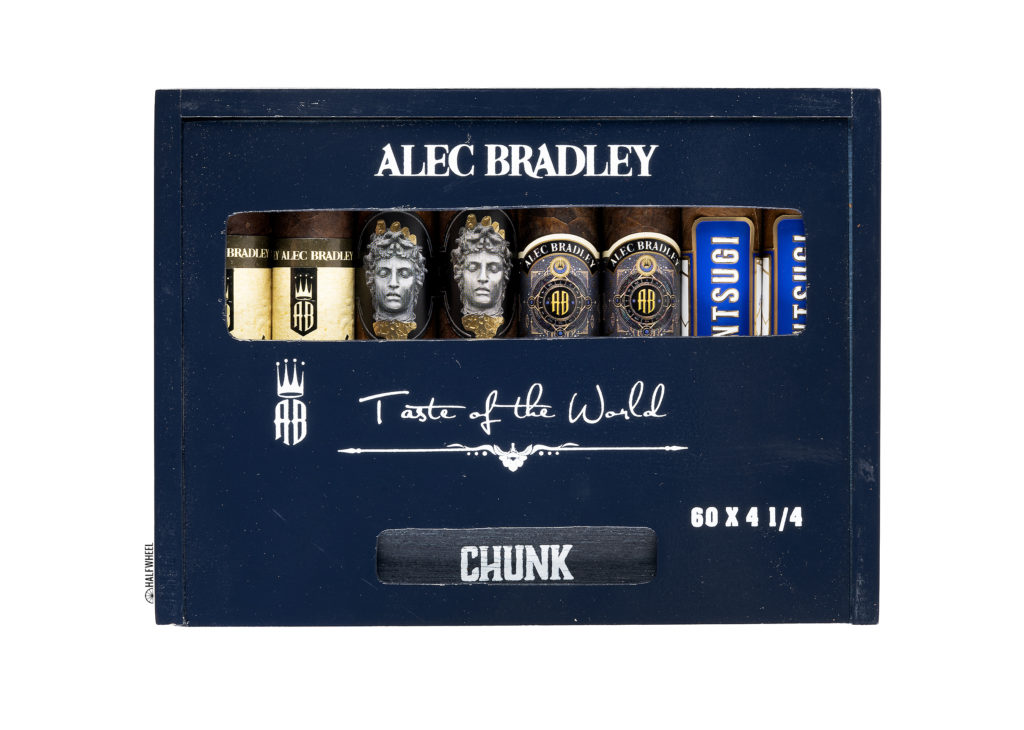 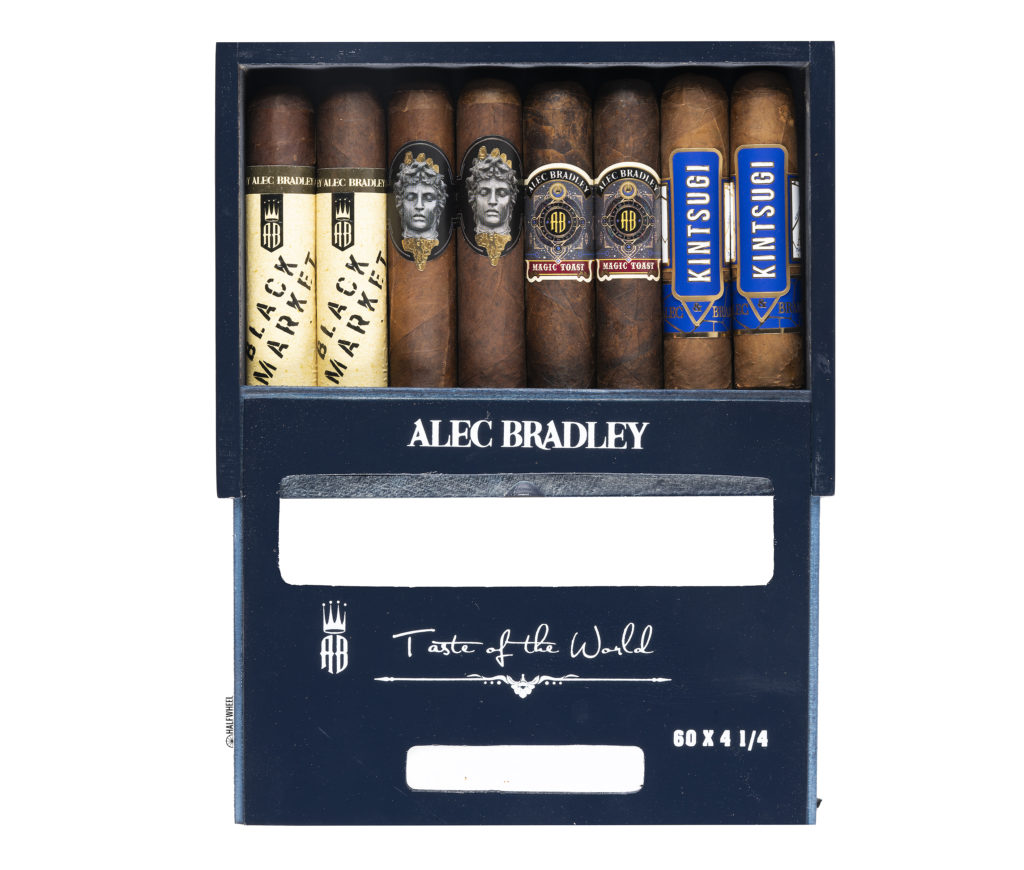 With the addition of the Chunk, there are currently five different vitolas in the Alec & Bradley Gatekeeper line:

Each “Taste of the World Chunk” sampler carries an MSRP of $74.95 with only 2,000 samplers produced. The samplers started shipping to retailers in May. 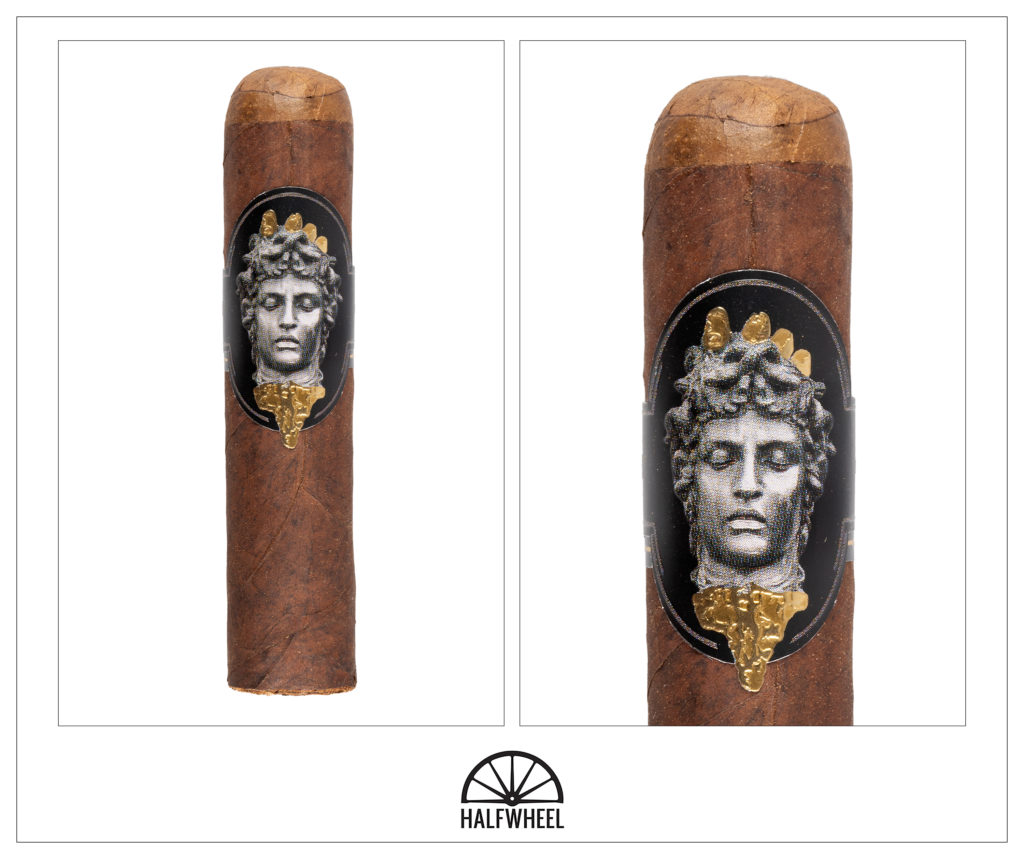 Covered in a gorgeous dark espresso brown wrapper, the Alec & Bradley Gatekeeper Chunk is both short and stubby when held in my hand. The wrapper is sandpaper rough to the touch and also totally devoid of oil, but a few thin veins run up and down its length. All three cigars are extremely firm when squeezed, but one cigar has a small soft spot just below the main band on the left. Aroma from the wrapper is a combination of earth, nuts, wood, leather, hay and manure along with a slight indeterminate sweetness. The foot brings much stronger notes, including distinct dark chocolate, generic wood, raisin sweetness, nuts, earth, roasted espresso beans, black pepper and barnyard. Finally, a cold draw after a straight cut reveals flavors of strong espresso beans, cocoa nibs, pine nuts, hay, cedar, black pepper and slight berry sweetness.

The first few puffs after lighting the foot of the Gatekeeper Chunk inundate my palate with a combination of bitter espresso beans and black pepper, along with a slight metallic note on the finish and some noticeable spice on my tongue. Main flavors of gritty earth and cocoa nibs quickly separate from the pack, followed by creamy hay, leather, pine nuts, roasted coffee beans, nutmeg and oak. The retrohale features both black pepper and maple sweetness, but there is definitely more of the former than the latter, and that does not seem to be changing any time soon. Flavor and strength are just under medium, while the body is lagging behind a bit at mild plus. In terms of construction, all three aspects—draw, smoke production and burn—seem to be working extremely well together for each cigar, although the burn is not exactly razor sharp at any point. 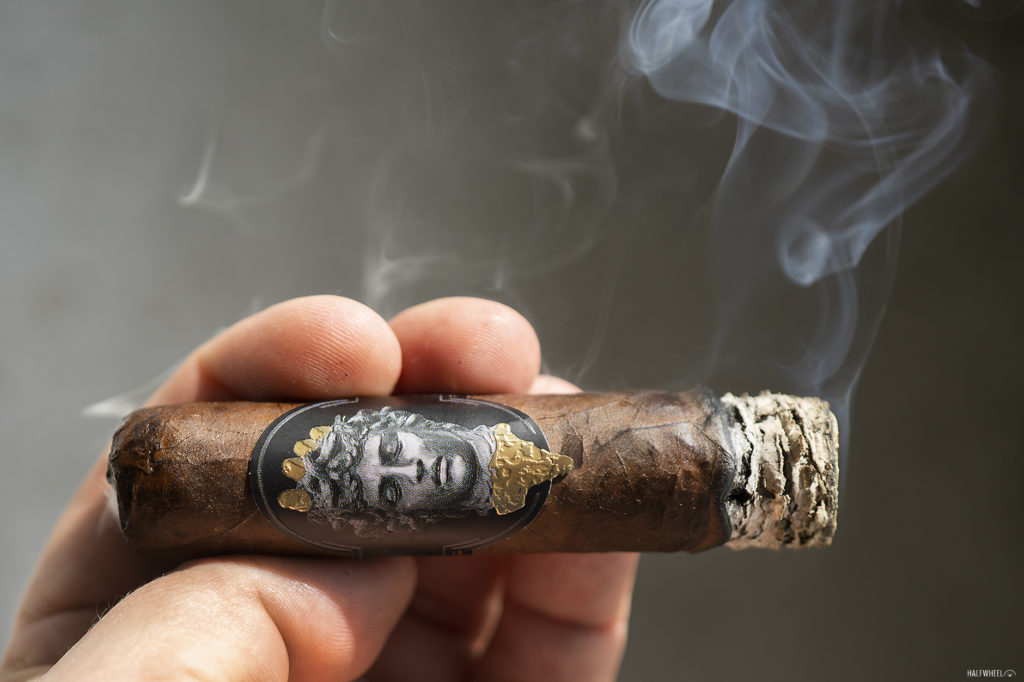 By the time the second third of the Gatekeeper starts, the spice that was present throughout the first third is a thing of the past, but on a more positive note, so is the metallic note on the finish. The top flavors have shifted a bit as well, with a distinct oak note replacing the earth flavor, although the cocoa nibs remain in place as well. Secondary flavors include leather tack, earth, hay, toasted bread, dry tea leaves, nuts and slight citrus peel, while the amount of black pepper and maple sweetness on the retrohale is basically unchanged. Flavor has bumped up to medium plus while both the strength and body meet up at solid medium. Construction-wise, the draw and smoke production on all three cigars continue to impress, but two of the cigars run into minor issues when it comes to their burn lines, leading to a couple of corrections with my lighter. 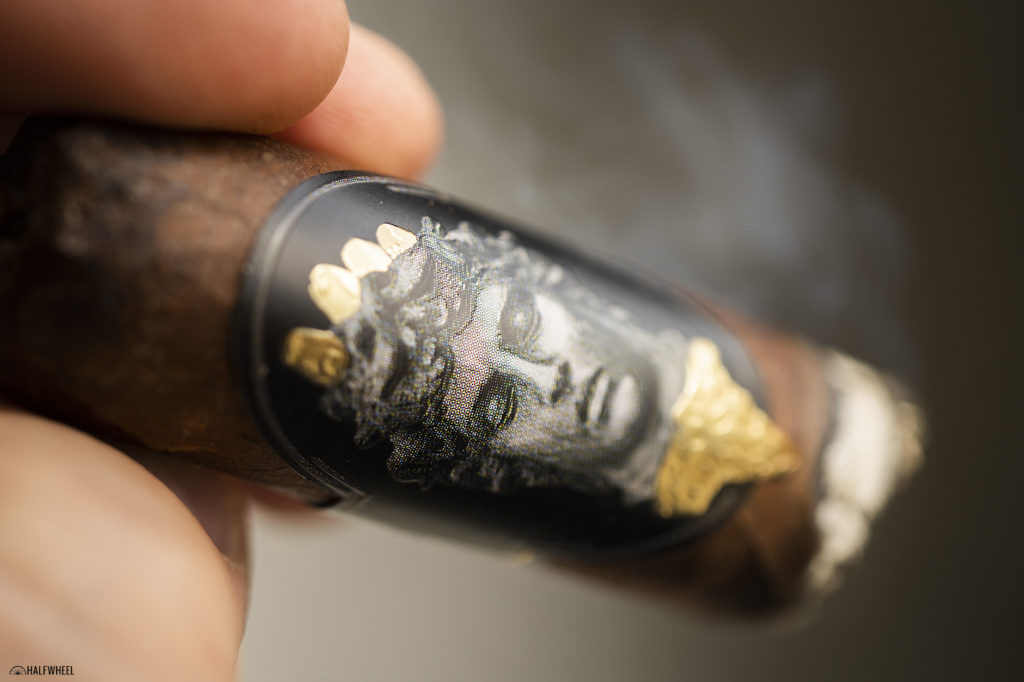 Flavors of oak and gritty earth lead the Alec & Bradley’s profile during the final third, while the cocoa nibs flavor from the second third recedes to the background where it is joined by notes of brewed black coffee, leather, sourdough bread, cinnamon and a very slight vegetal flavor that reminds me of broccoli when it shows up, which is not very often. Unfortunately, the amount of black pepper and maple sweetness has not changed much, but in two of the cigars, a bit of spice climbs back into the profile and becomes noticeable on my lips for a short time. Flavor ends at medium plus, body ends at a solid medium and the strength bumps up slightly to end just above the medium mark. Although there is no change in either the copious amount of smoke emanating from the foot or the draw—which is a very good thing—two of the cigars once again need a couple of minor corrections each to keep things on track until the end. 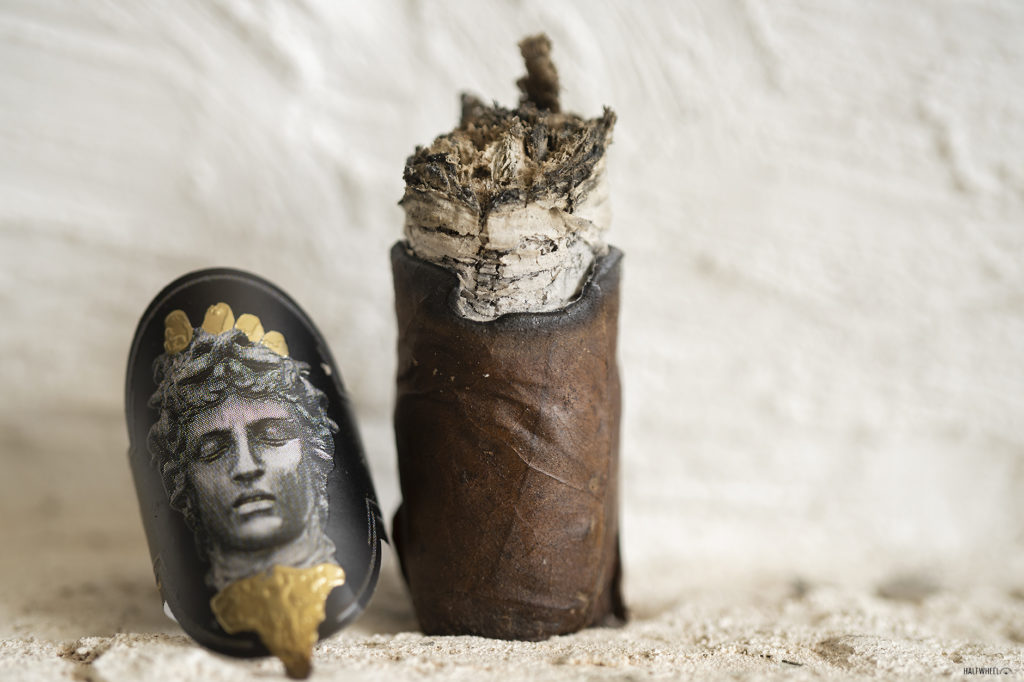 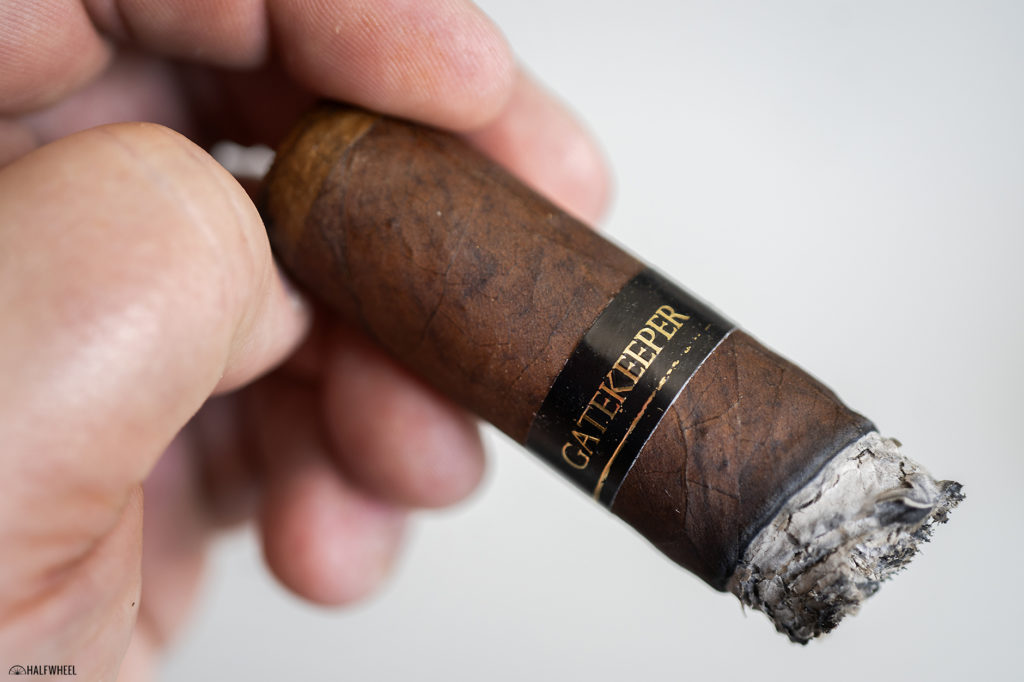 With main flavors of oak, earth and cocoa nibs, the profile of the Alec & Bradley Gatekeeper Chunk is dense and enjoyable but not really all that complex at any point during its close to two-hour smoking time. While I tasted a bit of maple sweetness combined with some black pepper on the retrohale, neither note was strong enough to make much of an impact on the profile as a whole. Construction was decent overall—all three cigars needed at least one burn correction, but they were all minor in nature—and while the strength picks up in the final third, it is never overwhelming. In the end, fans of earth, oak and dark chocolate flavors in their cigars should love this, but the combination of a short and stubby vitola combined with a lack of overall sweetness and complexity will keep it from being a cigar I smoke very often.