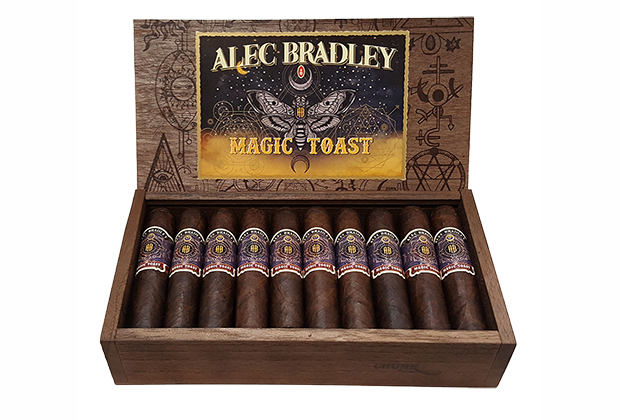 The cigar measures 4 1/2 x 60, a size that has been used before under the same name in the Black Market line as a Canadian exclusive. This version is slated to arrive in the U.S. in October before going worldwide in November. It will be a permanent addition to the Magic Toast line and will come priced at $9.25 per cigar before taxes. It will be offered in 20-count boxes.

Like the rest of the line, it uses a natural wrapper grown in Honduras that sits atop two binders, one from Nicaragua and one from Honduras. The filler also features tobaccos from those two countries. It is made at the Raices Cubanas Factory in Danli, Honduras.

As the company tells the story, Magic Toast was born when Alan Rubin, the company’s founder, was taken to a new tobacco field immediately after arriving to Central America. It was dusk and the group needed the pickup truck’s headlights to see the crop, but when he and his business partners saw the tobacco, they knew it was something special. As such, someone grabbed a bottle of scotch from the truck and a toast was proposed right then and there, with Rubin’s business partners referred to the crop as magical. Thus the name Magic Toast was born, with the cigars using tobacco from that crop.

“Premium cigar enthusiasts really embraced the story of Magic Toast; after that, it was a must-try” said Jonathan Lipson, director of sales and marketing, via a press release. “The flavor profile is exquisite and the cigars are an unbelievable value. Adding a short 60 ring gauge cigar to the line will help expose more enthusiasts to Magic Toast and Alec Bradley as a whole.”

The line was unveiled at the 2018 IPCPR Convention and Trade Show and is also available in robusto, toro and gordo vitolas.