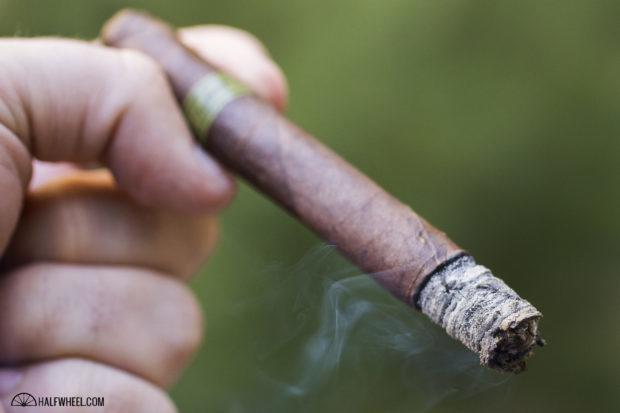 There aren’t a lot of cigars where it would be fair to call them “the cigar that started it all,” but one instance where it most certainly would is the Tatuaje’s The Frank, the first release in the Tatuaje Monster Series that has now grown to 31 distinct cigars.

The Frank was released in October 2008, named for Frankenstein, the fictional young doctor with a gift for giving life to non-living matter, using his skill to make a living creature from cadavers. While his goal was to create a beautiful creature, as told in Mary Wollstonecraft Shelley’s 1818 novel Frankenstein, the creature stood over eight feet tall, had grotesque yellow eyes and skin that barely covered the inner flesh and was such a disappointment to Doctor Frankenstein that he abandoned his creation. Saddened by this, the creature leaves, only to eventually find his creator and plead with him to create a female companion, promising to disappear if his request is granted.

While Frankenstein agrees, during her creation he becomes disturbed by thoughts that he might be laying the groundwork for a new race of creatures that could be detrimental to humans. He abandons his work as the creature watches, who in turn kills his childhood friend and then his fiancé, Elizabeth, escaping to the North Pole where Frankenstein finds but does not kill him.

For the release of The Frank, Pete Johnson chose 13 retailers across the country to carry the limited edition, a group that became known as the “Unlucky 13” both as part of the Halloween-themed release and for having to figure out how to handle the demand that the Monster Series would come to generate.

The following is largely based on text from Charlie Minato’s review of the Tatuaje Skinny Wolf.

While the original plan for the Monster Series was to grow to 13 releases of large and relatively strong cigars named and packaged based on a monster from literature or film, it eventually outgrew those original plans and now includes three offshoot lines and a partnership with S.T.Dupont for limited edition accessories.

In 2012, Tatuaje released the Little Monsters, which included smaller versions of the first five Monster Releases. The blends were the same, though the Little Monsters were all rolled in 2012 and the cigars shrunk. For example, the Frank Jr. was a 5 5/8 x 44 version of The Frank, a 7 5/8 x 49.

The cigars did keep the same unique looks as their larger counterparts: Baby Face used a strip of tobacco instead of a band, Wolfie kept the brushed foot of The Wolf and the box-pressed original Monster Series cigars translated into box pressing the smaller versions. For Frank, that meant keeping the same sickly shade of green on the band with the Tatuaje script logo in dark brown.

Two years later, Tatuaje released the Pudgy Monsters. These cigars took the same length as the Little Monsters, but used the original ring gauge of the regular Monster Series, meaning the Tatuaje Frank was 5 5/8 x 49. Once again, the unique traits of the original Monster Series cigars carried over into the Pudgy versions, a sampler that included the first six Monsters Series release as well as two each of new blends, Chuck and Tiff—cigars based off the characters from Don Mancini’s Child’s Play films, specifically Bride of Chucky.

It’s a grand departure from the Little and Pudgy form, with the release largely based off the Tatuaje Black Label Petite Lancero. This time, every cigar in the sampler measures 6 x 38 and is round. The cigars feature a typical parejo shape, instead of a Torpedo for the Skinny versions of The Drac and The Wolfman. 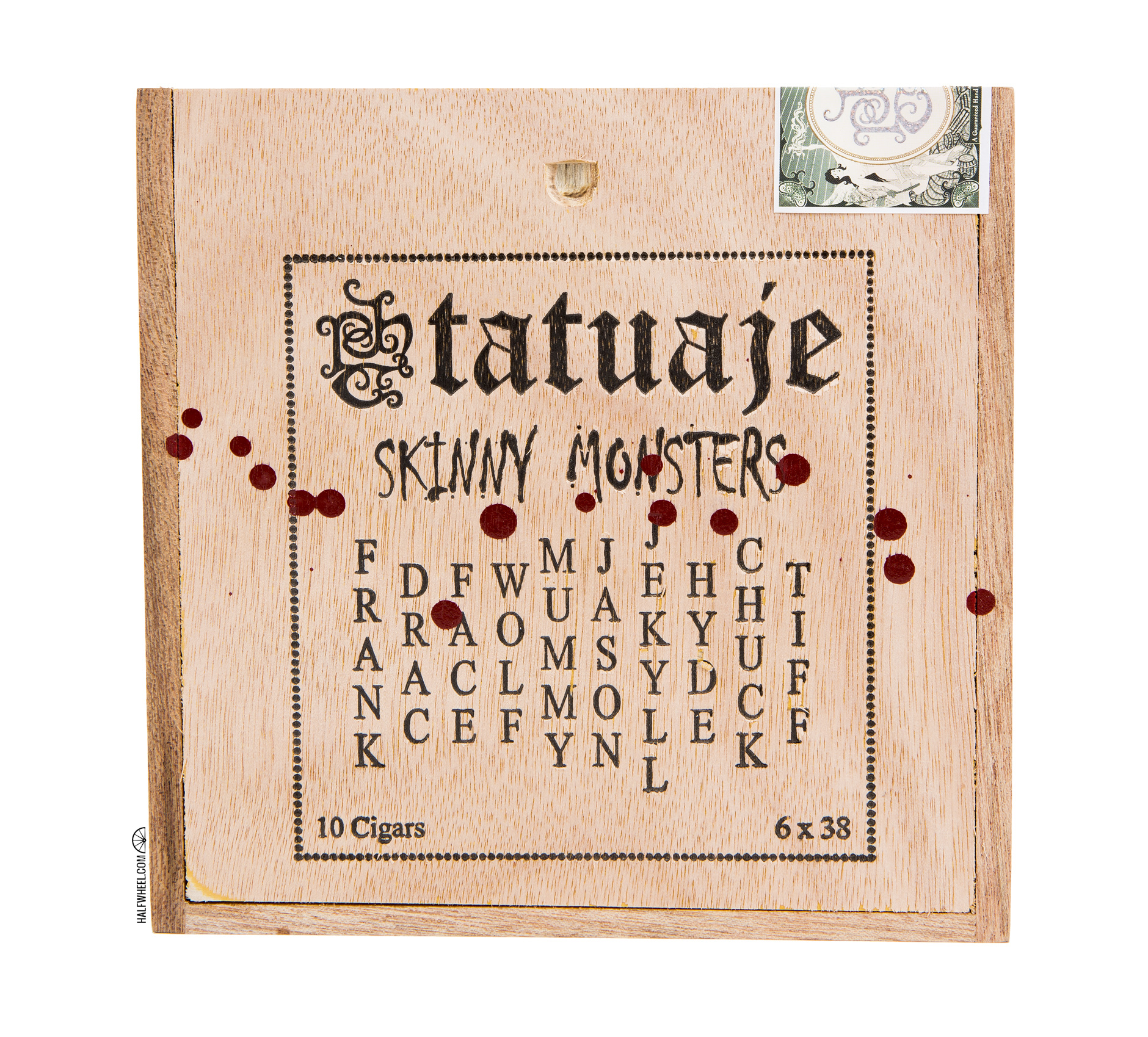 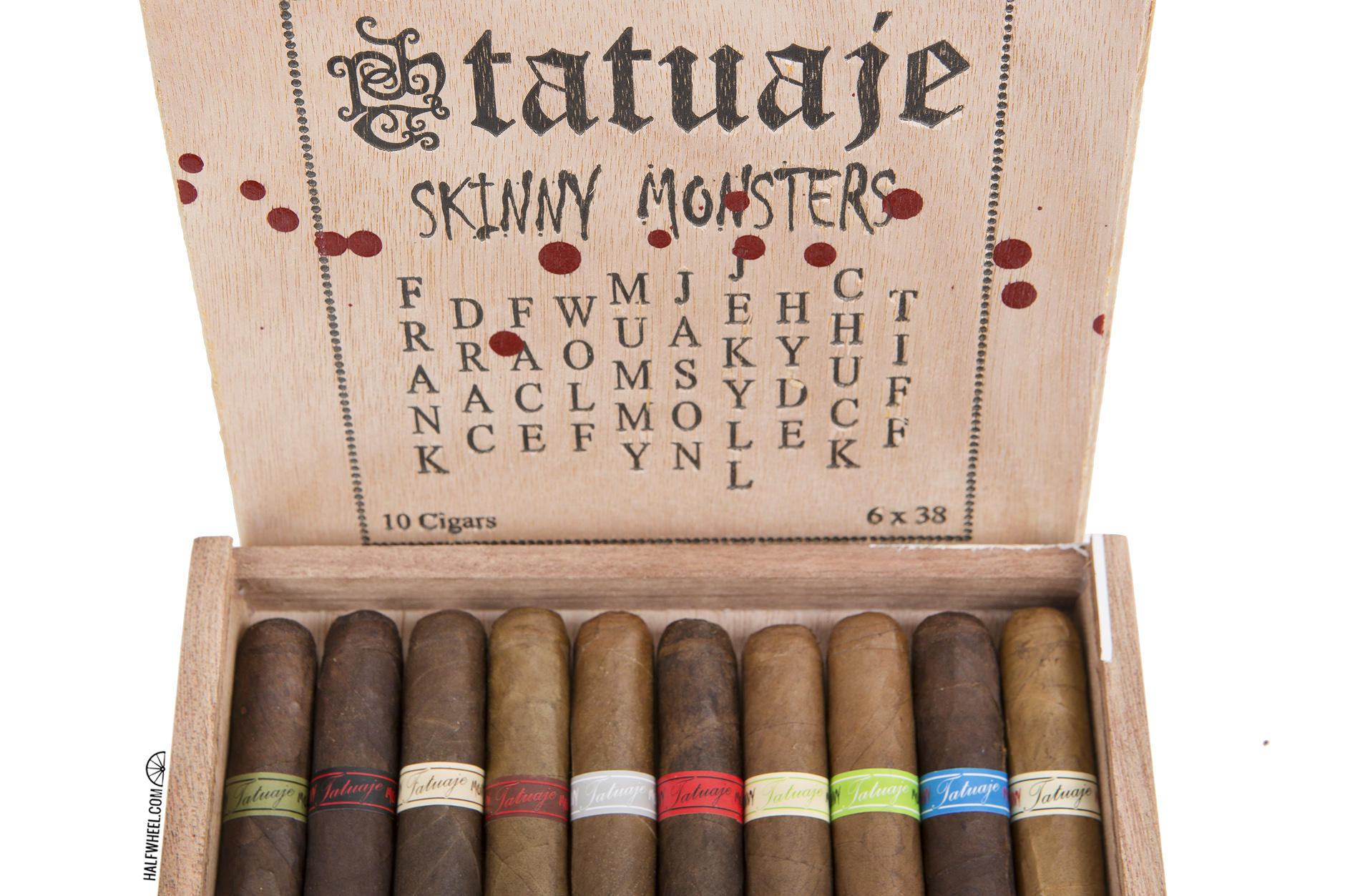 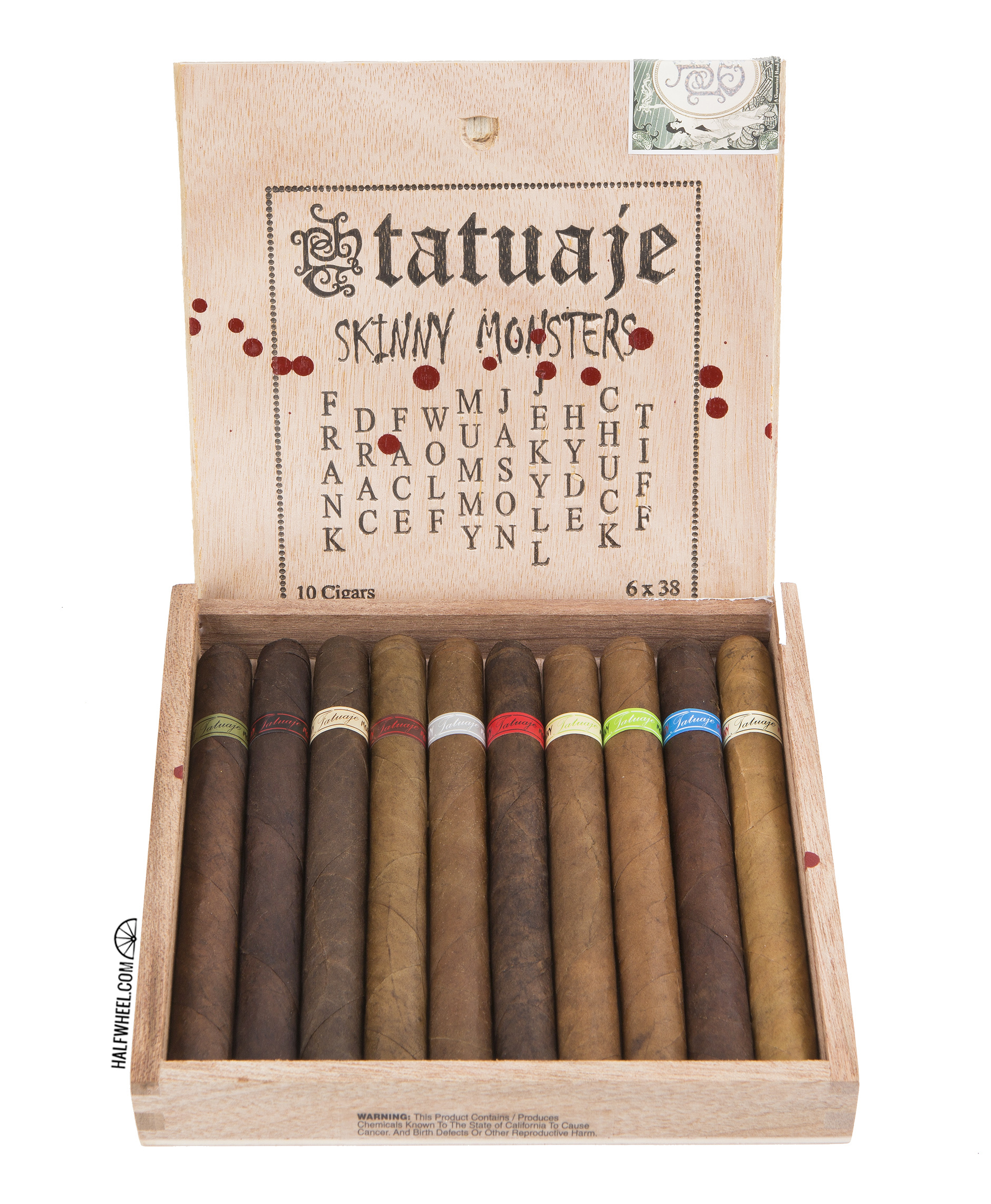 While the dress box Skinny Monsters do constitute special packaging, the boxes are based off of the Tatuaje Petite Lancero boxes, a vertical wooden box. In addition, these cigars will be sold at a later date—specifically the IPCPR Convention & Trade Show in late July—as opposed to the regular Monster Series dress boxes, which are allocated largely to 13 different retailers each year with some other retailers receiving small quantities of one to three dress boxes.

In addition, Johnson has said that one of the Skinny Monsters may enter regular production. 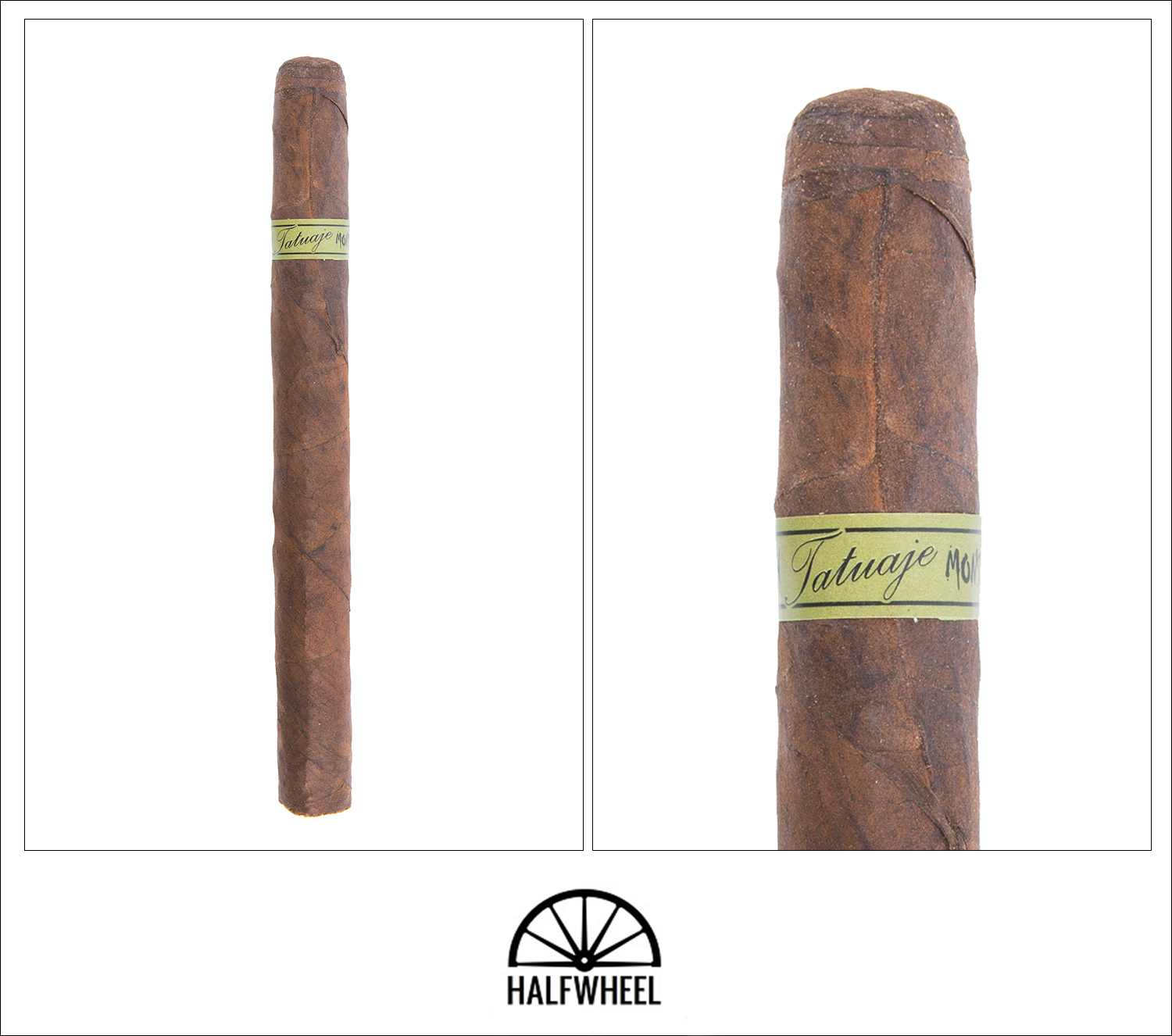 The Tatuaje Skinny Frank has a very dark and veiny wrapper, with some samples having such prominent veins that I’m surprised they cleared quality control based on looks. There’s also a good bit of tooth the capa, and on certain samples an impressive amount of crystallization. It’s a firm cigar with just the slightest amount of give, and for the most part everything looks right about the roll: no bumps, flat seams and so on. The foot offers notes of chocolate syrup at first inspection, though I also get the smell of chocolate covered cherries, with a thick albeit slightly artificial cherry sweetness. The cold draw is a touch on the firm side and has a much lighter taste, initially reminding me of a light Scotch that skews towards lumber. There’s a bit of pepper to be found but it is very mild and equates to what you might find in said Scotch.

While there are a few suggestions made to the palate that the Skinny Frank has some pepper,  it absolutely explodes in the nose, big and bright with most zing than I anticipated, and while the first retrohale had me intrigued, the second one has me questioning whether I can handle a third and reluctant to find out. The flavor and character of the smoke quickly settle in at medium-full and spend a few moments in the full territory before the first clump of ash falls off shy of an inch in length. A bit more pepper begins to develop on the palate at that point, while at the same time the smoke picks up a more rounded texture, fuller but also a bit softer except for in the nose, where the pepper is much sharper. That texture changes a bit in the transition to the next portion of the cigar, getting a bit rockier and rougher, not a harsh flavor or texture but one that is a bit more attention grabbing than what was offered a few puffs ago. I begin to get a very slight metallic flavor from the Tatuaje Skinny Frank, though it fades away quickly and returns to much of the same flavor profile from the first third, which I have a hard time fully describing as while I’m getting pepper, touches of earth and more importantly body and increasing strength from the cigar, I’m also having an increasingly hard time figuring out exactly what it is I’m tasting, though the lingering finish gives me ample time to ponder it. There’s suggestions at a charred steak edge at certain points, dry and charred wood at others, and yet at other points hints at rock and minerals, and the third sample provides the richest profile of them all, a much needed final audition as the first two sticks certainly lacked it. The dryness of the profile, while not particularly mouth-drying, seems to make it that much harder to really dig into the profile, leaving me fishing for descriptors. I’m also amazed at how quickly the Skinny Frank burns through this section, seemingly at a 50 percent faster rate than the first third. 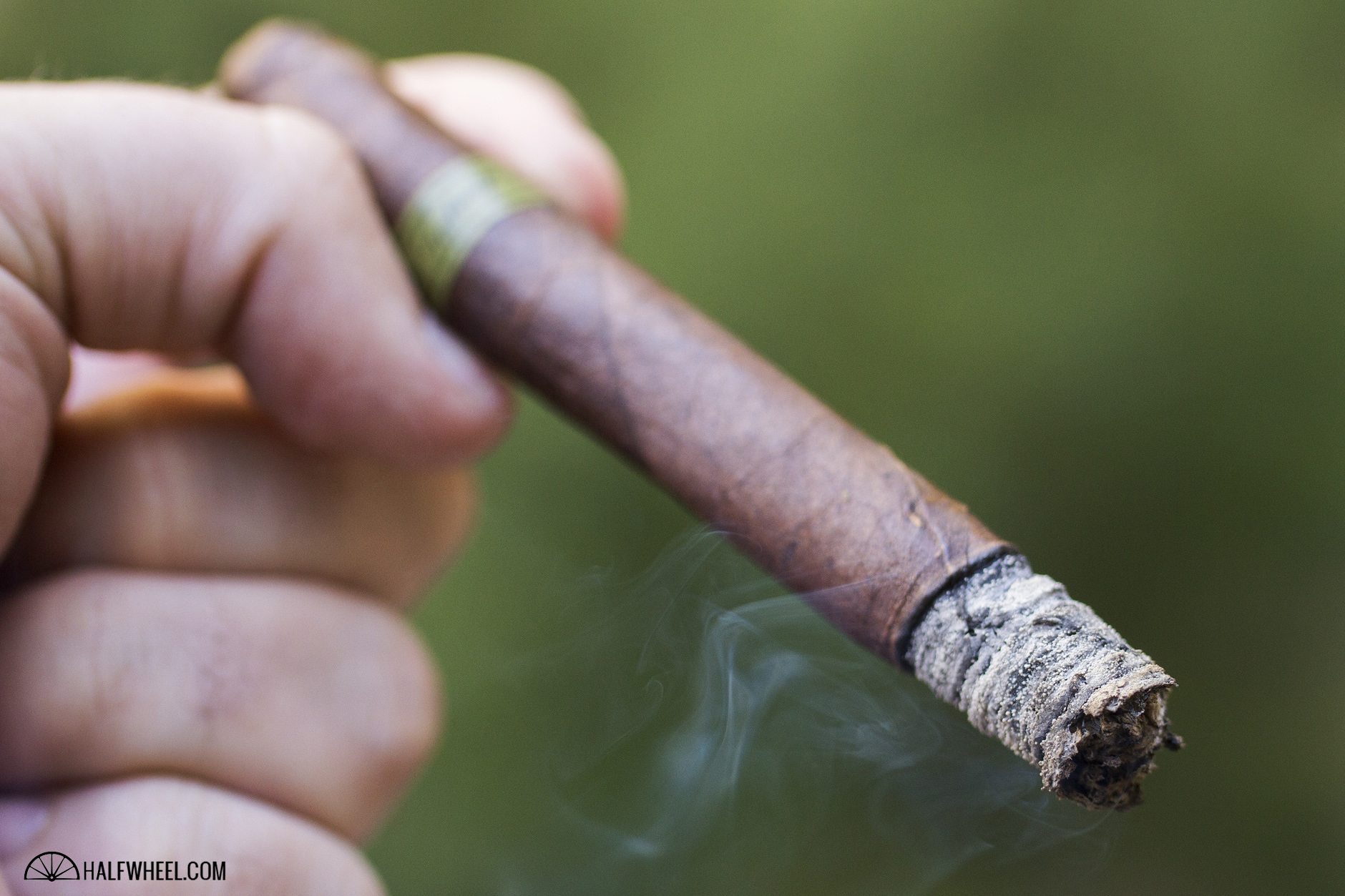 The cigar continues to get fuller in body at the start of the final third, primarily through becoming more robust with rougher notes of earth and pepper. The burn rate stays quick and keeps moving up the cigar fairly rapidly, and with the band gone, the draw suddenly loosens up a bit and the flavor cleans itself up nicely, shedding some of the rougher spots while maintaining its core earth, rock and pepper. Heat begins to play an increasing role in shaping the cigar’s flavor as it picks up a much sharper edge, something remedied only slightly by drastically slowing my rate of puffing. The cigar keeps burning to a tiny nub, finally requiring a draw poker or a flick into the ashtray with just under an inch left. I’ll be the first to admit that there aren’t many of Tatuaje's Monster Series cigars on my all-time favorites list, though I have enjoyed pretty much every one I’ve smoked. However, the Skinny Frank fell way short of the mark for my liking, with flavors that were hard to pick out despite the smoke making a decent initial mark and leaving a lingering finish on my palate. There could very well be a point in time when the Tatuaje Skinny Frank comes alive, but at the moment two of the three samples I smoked suggest it’s more of a dull creation.