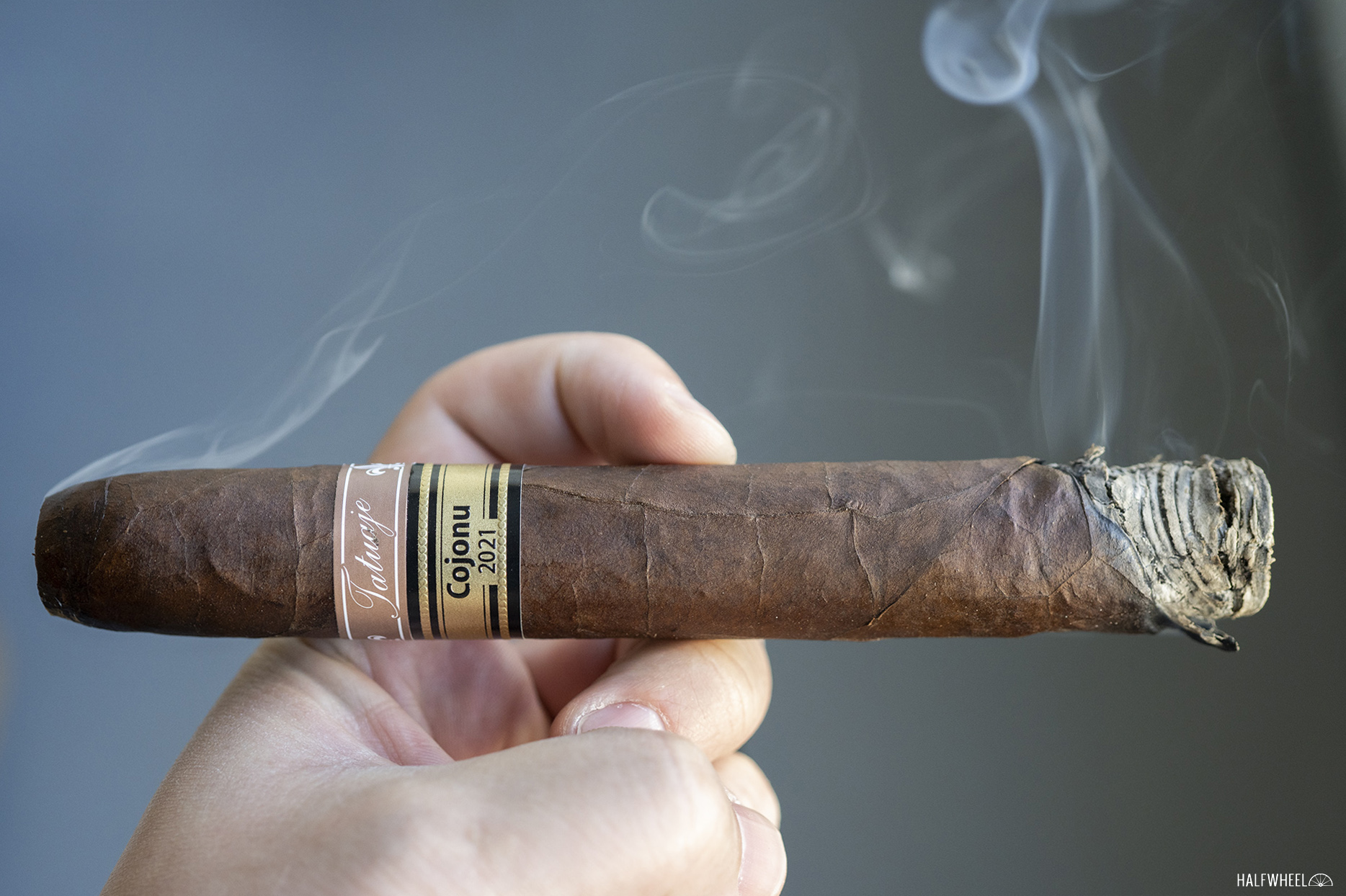 It could be tough to keep track of all of the new Tatuaje products for 2021. Some are Tatuaje, others are L’Atelier; some are sold in boxes, other new products are offered exclusively in samplers; most of the new items have shipped to stores, though some are delayed until next year. There’s been so many new items, it can feel a bit overwhelming. But there is one theme, of sorts, that I think is fair to describe Tatuaje’s approach to new cigars in 2021: extensions.

I believe that every new release is actually not entirely new, rather, each new cigar can be tied back to a previous release. That is certainly the case with the new Tatuaje Cojonú 2021, a massive 7 x 58 belicoso. It’s the 12th cigar in Tatuaje’s Cojonú line, which was one of the first Tatuaje cigars ever released.

The Cojonú is based on Tatuaje’s Selección de Cazador line—better known as the Brown Label due to its bands—though it uses more ligero in the filler to give it a stronger profile. Tatuaje had been releasing a new Cojonú vitola every three years—2003, 2006, 2009, 2012—though there were not new releases in 2015 or 2018. The 2021 release gets back to the three-year cycle, with Tatuaje’s Pete Johnson saying there could be additional versions of the Cojonú 2021 with different wrappers, something similar to what was done for the 2012 release. As of now, it’s offered in just one version, one that uses an Ecuadorian habano wrapper. From a size perspective, this is a massive cigar. The elongated tip initially appears more subtle than it is because of how big the cigar is. The dark wrapper helps to make the secondary band really pop thanks to the contrast between the dark brown and gold. At first, the dark wrapper does a lot to help hide some of the imperfections, but upon closer inspection it’s easier to see some of the vein structure and the bumps along the body of the cigar. The aroma from the Cojonú 2021’s wrapper is medium-full with a mixture of barnyard, leather, dark chocolate and some acidity. The foot is fuller and sweeter thanks to sweet chocolate, fruitiness, red pepper and some stale bread. The cold draw has a mixture of leather, acidity, red pepper, some cocoa and earthiness.

The Tatuaje Cojonú 2021 starts with a mixture of leather and creaminess over white pepper, black pepper and toastiness. While the creaminess provides a bit of a contrasting flavor, I’m a bit surprised to not find any of the sweetness I detected on the cold draw. Eventually, that sweetness comes, though not in quantities that make much of a difference. The profile is led by quite a bit of toastiness, mixed with dark chocolate and burnt coffee, that sits over sunflower seeds, a bourbon-soaked oak flavor and some underlying creaminess. The finish is sweeter with nuttiness breaking through the toastiness. There’s also some butterscotch sweetness, a deep mineral flavor and a touch of paprika. Retrohales have an interesting mixture of bourbon, herbal flavors and some sweet fruitiness. There’s also cedar, white pepper and herbal flavors, though all three are secondary notes. Once the smoke leaves my nostrils, my palate picks up a lot more spiciness, some of which comes from white pepper and some of which seems more related to an uptick in sharpness. Once again, there’s some cedar and herbal flavors that are secondary notes. Flavor is full, body is full and strength is full. Construction is great on two cigars, while the third is struggling to burn on one side and needs to get touched up.

The profile gets a lot spicier in the second third, something that seems to be a result of an uptick in white pepper as well as black pepper and herbal flavors. While I normally would try to avoid characterizing pepper flavors as “spicy,” the combination of flavors creates more of a spice sensation than a pepper burn sensation. Oak and oatmeal are the next two strongest flavors, though there’s some remaining mineral and fruity flavors. What’s noticeably gone is the creaminess, which seems to be a large factor in the uptick in pepper flavors I’m detecting. The finish is led by coffee and herbal flavors over black pepper, earthiness, oak and some saltiness. Retrohales have paprika, oak and red pepper. While it’s not as intense as the retrohale during the first third of the Cojonú 2021, I also can’t find as many flavors. Much like with the main flavor, this seems like this would be a great place for the creaminess to return, and/or some sweetness. The finish of the retrohale reminds me of a spicier version of cinnamon candy, meaning there’s some sweetness, but it’s a lot of burning sensations. Flavor, body and strength all remain full, but that’s not half of the story. While there’s no doubt the pepper flavors become more intense during the second third, the element that increases the most in terms of its intensity is the nicotine, which is beginning to make me feel lightheaded as I cross the middle portion of the cigar. It’s strong and seemingly not letting up. Construction is excellent on all three cigars. 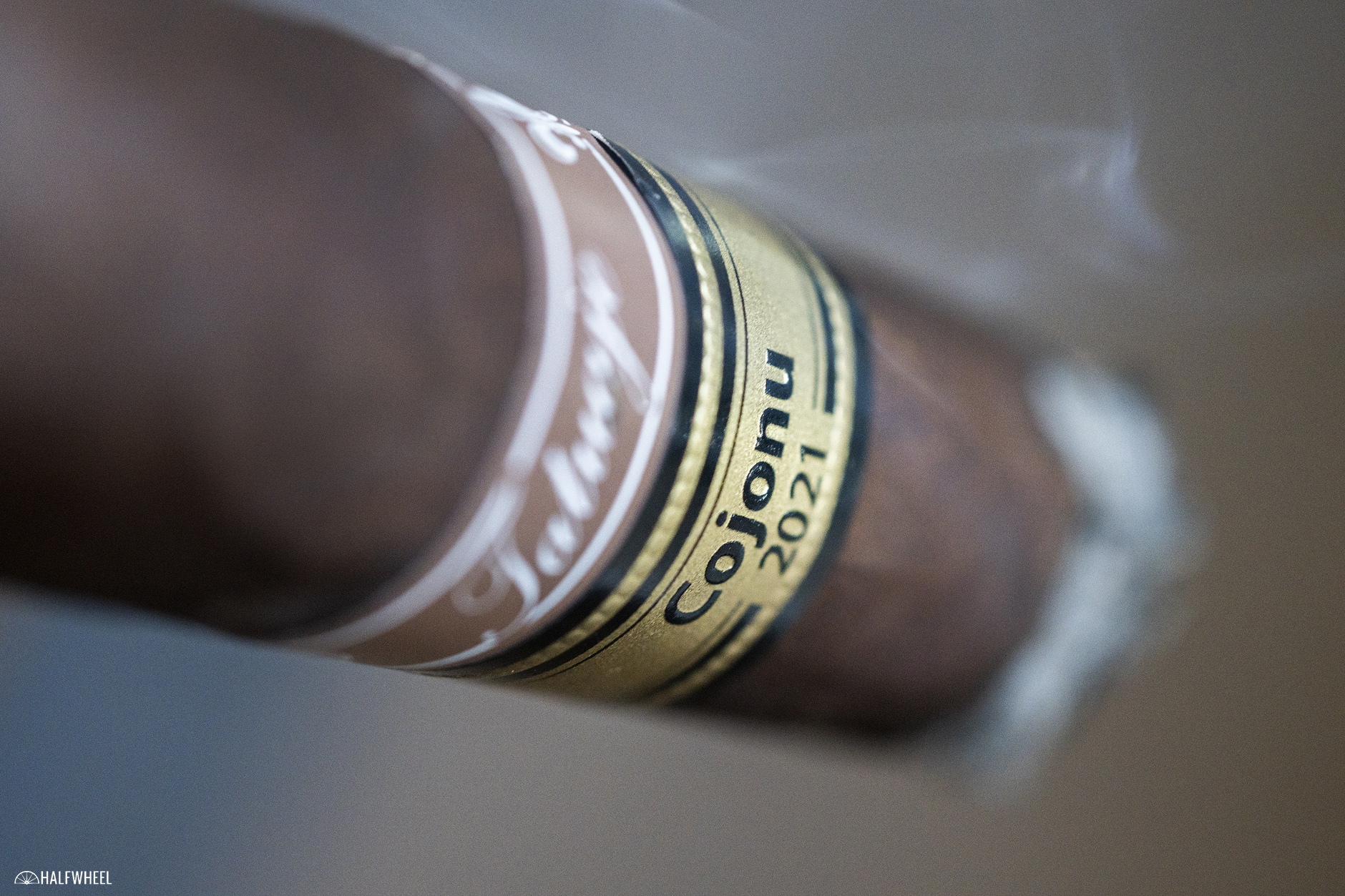 Dry oak and milk chocolate lead the way in the final third of the Tatuaje Cojonú 2021. After the uptick in pepper sensations during the middle parts, I’m thankful for the change. And while the complexion of the profile has changed a lot, it’s not to say the pepper is gone. Red and black pepper remain, they just aren’t as sharp as they were before. On the finish, there’s cinnamon, red pepper, earthiness, oak and some toastiness. Retrohales have oak, a tart lemon, red pepper and some floral flavors. It finishes with oak and red pepper, though I’m not sure how much of the pepper sensation is new and how much of it is just what I’m tasting after more than two and a half hours of this very full cigar. Speaking of which, everything remains full in the final third, though it’s certainly not as intense as it once was. Touch-ups are needed during two of the cigars during the final third, though it’s relatively minor in the grand scheme of things. If you smoked the Tatuaje T110 and thought to yourself, “you know what I need?, a stronger Tatuaje cigar for 2021” then here’s the answer. The Tatuaje Cojonú 2021 is exactly what you think it is: a big, heavy cigar. While I’ve found certain Cojonús to have plenty of complexity thanks to contrasting flavors, this is a more linear profile that delivers a spicy profile from start to finish. Unfortunately, my daily lunch routine doesn’t include a trip to a steakhouse, but if you are looking for a cigar to cap off a night that included a larger dinner, pour yourself a double, grab a Cojonú 2021 and don’t plan on doing much for the remainder of your evening.