In 2017, Room101’s Matt Booth announced that his partnership with Davidoff—which made and distributed his cigars—was ending and he was retiring.

As is more increasingly the case, Booth’s retirement wasn’t much of a retirement at all. Only a couple of months later there were whispers that he was working Abdel Fernández of AJ Fernandez and six months later it was confirmed that Booth was back.

As it turned out, Booth was working with a couple of factories. There were projects from AJ Fernandez as well as Tabacalera William Ventura, the main home of Caldwell Cigar Co. whose Down&Back company distributed Room101 until late last year. Room101 is now distributed by La Palina.

During that time, one of the first cigars Booth blended was the subject of today’s review. Booth claims the cigar has no name, though it’s referred to as Room101 Death Bucket.

The 6 x 52 toro uses an Ecuadorian habano wrapper, Dominican binder and Nicaraguan filler. Originally, there were 7,500 cigars made, which were sent to a group of stores in August of 2018, but Booth opted to make another 10,000 that were released to five stores earlier this year. The name comes from the band, which shows a KFC-inspired bucket with bones inside of it, as well as a drumstick with a bite taken out of it.

Pricing is set at $10 per cigar and the Death Bucket is offered in bundles of 10. 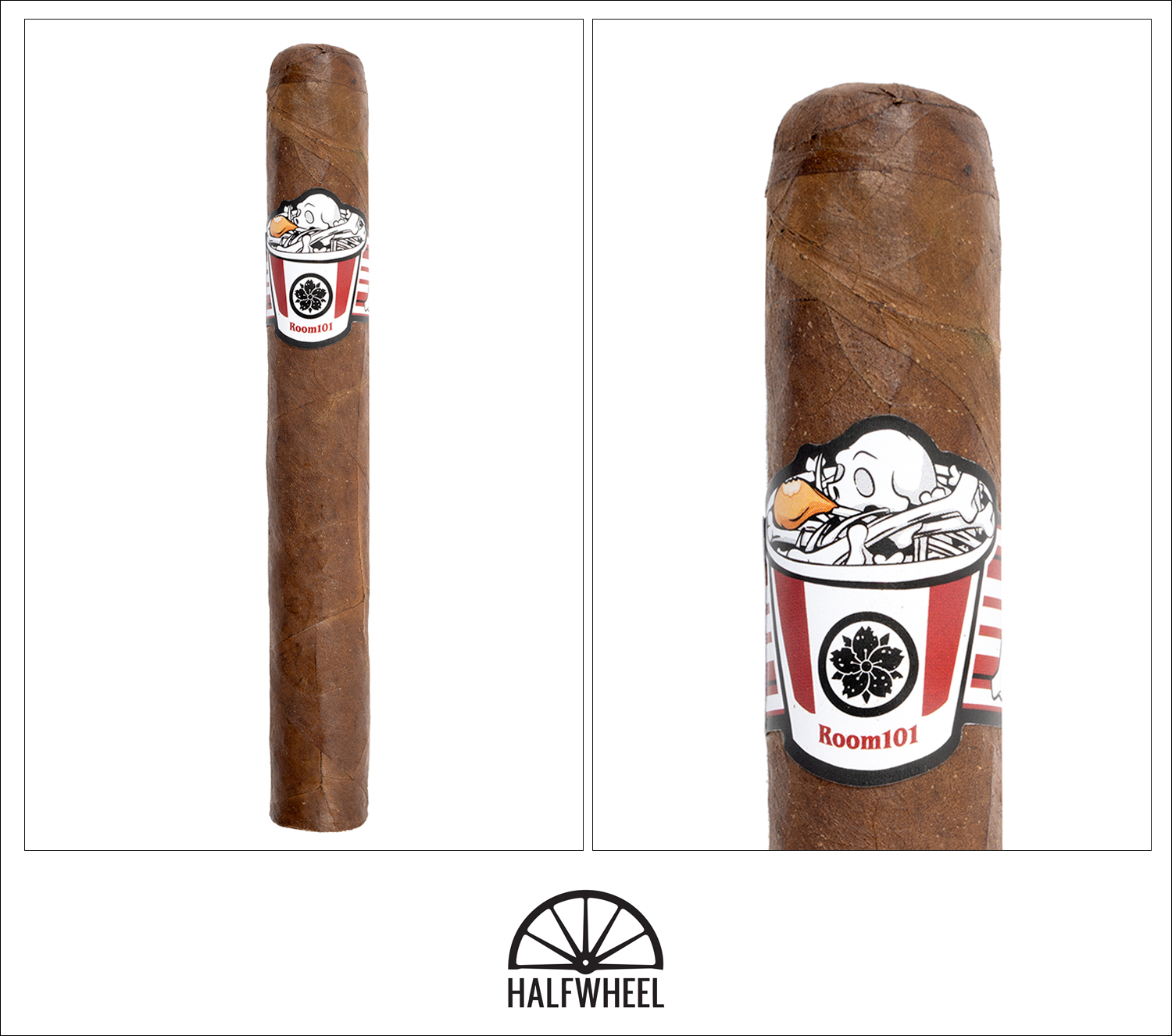 This is a great looking cigar with quite a bit of red and lots of oils present even before I take the cigar out of cellophane. While the wrapper has a nice supple leather feel, there are some bumps and veins that disrupt the smoothness. Aroma from the wrapper is just above medium with barnyard and a touch of citrus. The foot is medium-full with cocoa, lots of pecans, some barnyard and a bit of peppermint. The Death Bucket’s cold draw initially has some vanilla ice cream and a generic nuttiness, but after the third cold draw there’s more of a Thai basil and peppermint mixture, right around medium.

Once the smoke hits the palate I Immediately get a flavor remind me of fire-cured tobacco. It’s incredibly distinct and distracts from some of the rest of the flavors, which includes some nuttiness, a freshly varnished wood flavor and a touch of raisins. The Room101 Death Bucket both smokes quickly and seems to enjoy a faster puff rate. After just 15 minutes I’m surprised that there’s already a solid inch-long chunk of ash built up. The profile is a bit muted with lots of minerals, the generic nuttiness, walnuts, earthiness and a lemon acidity. Retrohaling produces a cleaner version of that profile with an added Worcestershire flavor, strawberry and a decent dose of the fire-cured flavors, particularly on the finish. If I don’t retrohale, the finish is a mixture of straw and nuttiness, quite pedestrian compared to the rest of the profile. The draw is slightly loose, which probably helps to explain the aforementioned commentary on burn rate, but construction is excellent in the first third with tons of smoke ready to leave the cigar on command.

The profile seems to complete its shift closer to the halfway mark than the final third, but it’s pretty clear when it does. Once the smoke hits my palate it starts with wet leaves before a white pepper, sharp lemon and some of the fire-cured notes take hold. Retrohaling is much milder with a watered-down peach tea flavor, lots of earthiness and some creaminess. The white pepper that was present before ramped up but then completely disappears shortly after the halfway mark. The finish has a touch of caramel sweetness that is quickly overwhelmed by some white pepper. Flavor is full, body is solidly full and strength is very close to medium-full. For 15 minutes, I’m quite concerned with how the Room101 Death Bucket is going to finish. There’s a heavy barrage of sourness that transitions between the middle parts and the emerging nub. Fortunately, with about an inch and a half left, it disappears and gives way to a resurgent earthiness with a bit of sweet vanilla underneath. The retrohale is much milder with toastiness, strawberries and a heavy dose of peanuts on the finish. When I don’t retrohale, the finish has more of a ground taco meat flavor at times, while other times it’s what I imagine eating a pile of wet leaves would taste like. After 20 seconds or so, there’s a paprika kick that emerges and then leaves more of a soy sauce flavor. Flavor is full, body is medium-full and strength is medium-full. The most notable change outside of the 15 minutes of sourness is the burn, which has slowed down and is in need of help. Each sample needs at least one touch-up to help make it to the finish but the smoke production never gets to the level that it was at previously. The Room101 Death Bucket was one of the more flavorful cigars I've smoked from Matt Booth, but it also was one of the most unbalanced. While the first third was consistently enjoyable, the second third was oftentimes dominated by a wet leaf and white pepper combination. To some degree, the final part of the final third was my favorite part of the cigar in terms of taste, but the 15-minute barrage of sourness wasn't worth the payoff. This is an eclectic flavor profile and a pretty easy cigar to smoke but the cigar has some unavoidable issues.