In 1935, Alonso Menéndez created the Montecristo brand, meaning that this year marks its 80th anniversary—and of course, warrants an anniversary cigar.

Because of the embargo on Cuban goods in the U.S., there are two Montecristo brands; one is owned by Cubatabaco, the state-run cigar business in Cuba, while the other is sold only in the U.S., owned by Altadis U.S.A. As many know, Habanos S.A., the marketing and distribution part of Cubatabaco, is actually a joint venture partially owned by Imperial Tobacco, the parent of Altadis U.S.A.

While it remains to be seen what, if anything Altadis USA will do, Habanos S.A. has already announced its Montecristo 80th anniversary release, the Montecristo 80 Aniversario. It’s a special edition cigar in a 6 1/2 (165mm) x 55 vitola, making it slightly longer than the increasingly-popular Double Edmundo vitola. Habanos S.A. says it is using tobaccos only from the Vuelta Abajo region and is blended to be stronger than a typical Montecristo. 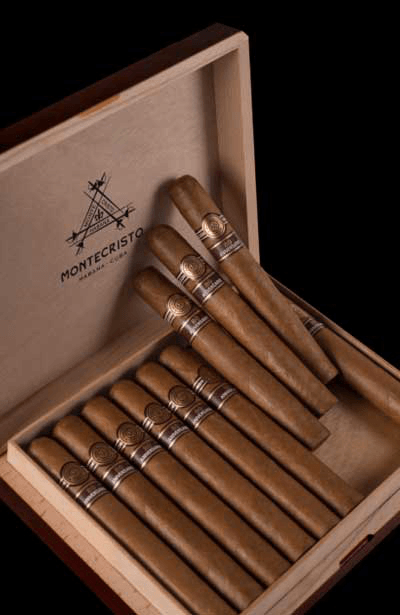 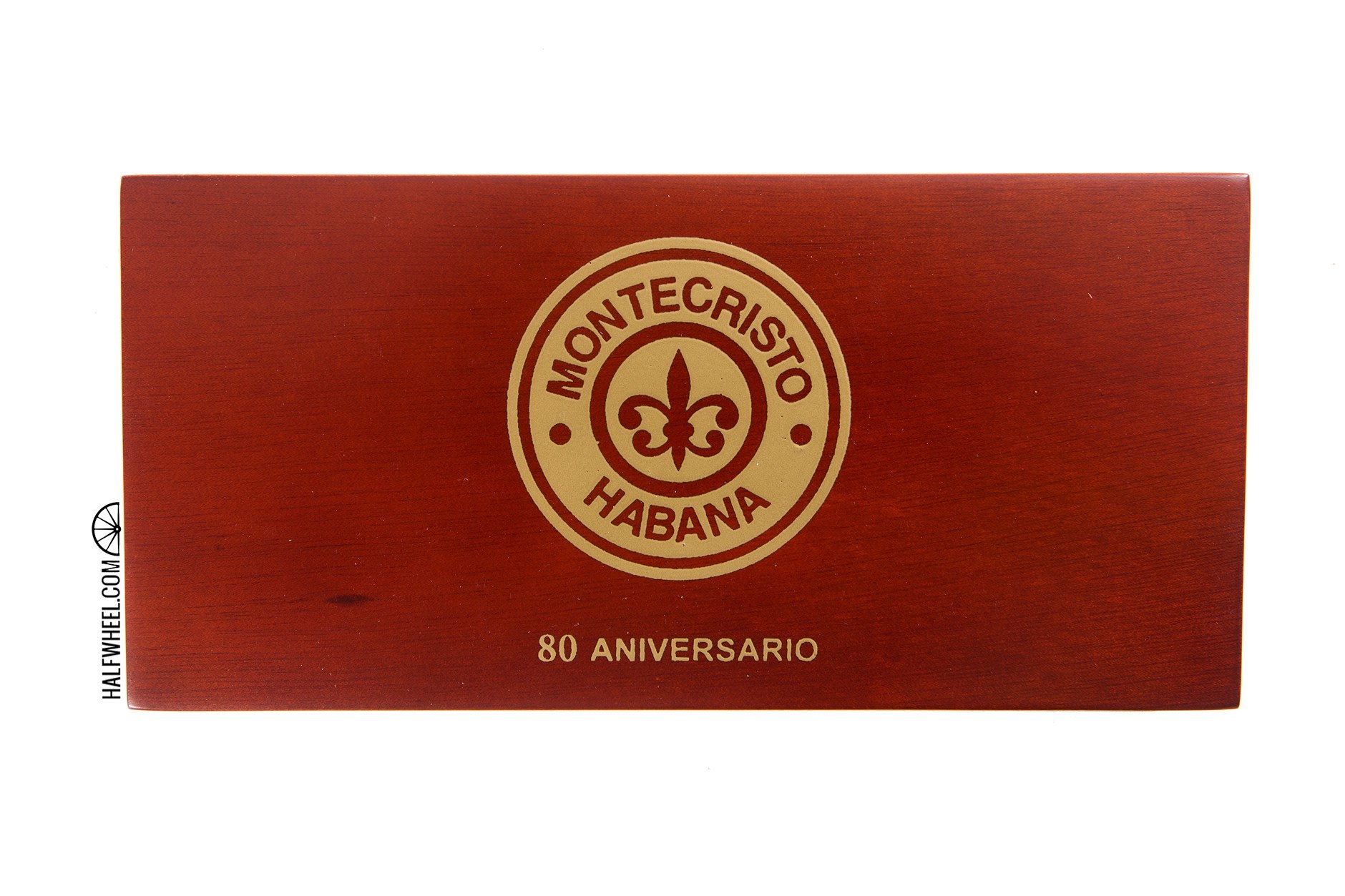 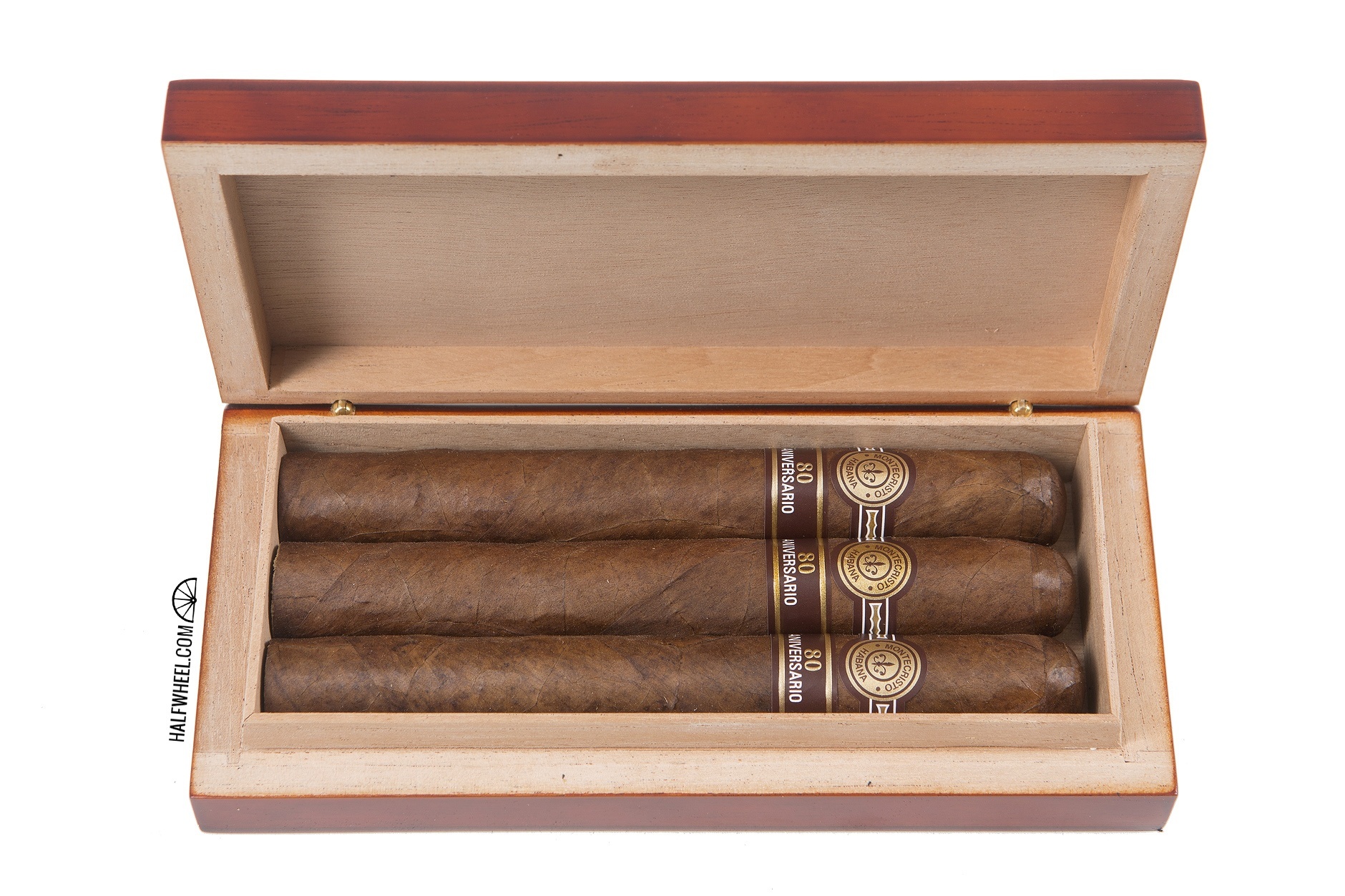 It debuted at the Festival del Habano XVII earlier this year, where attendees were given three-pack samplers of the cigar. 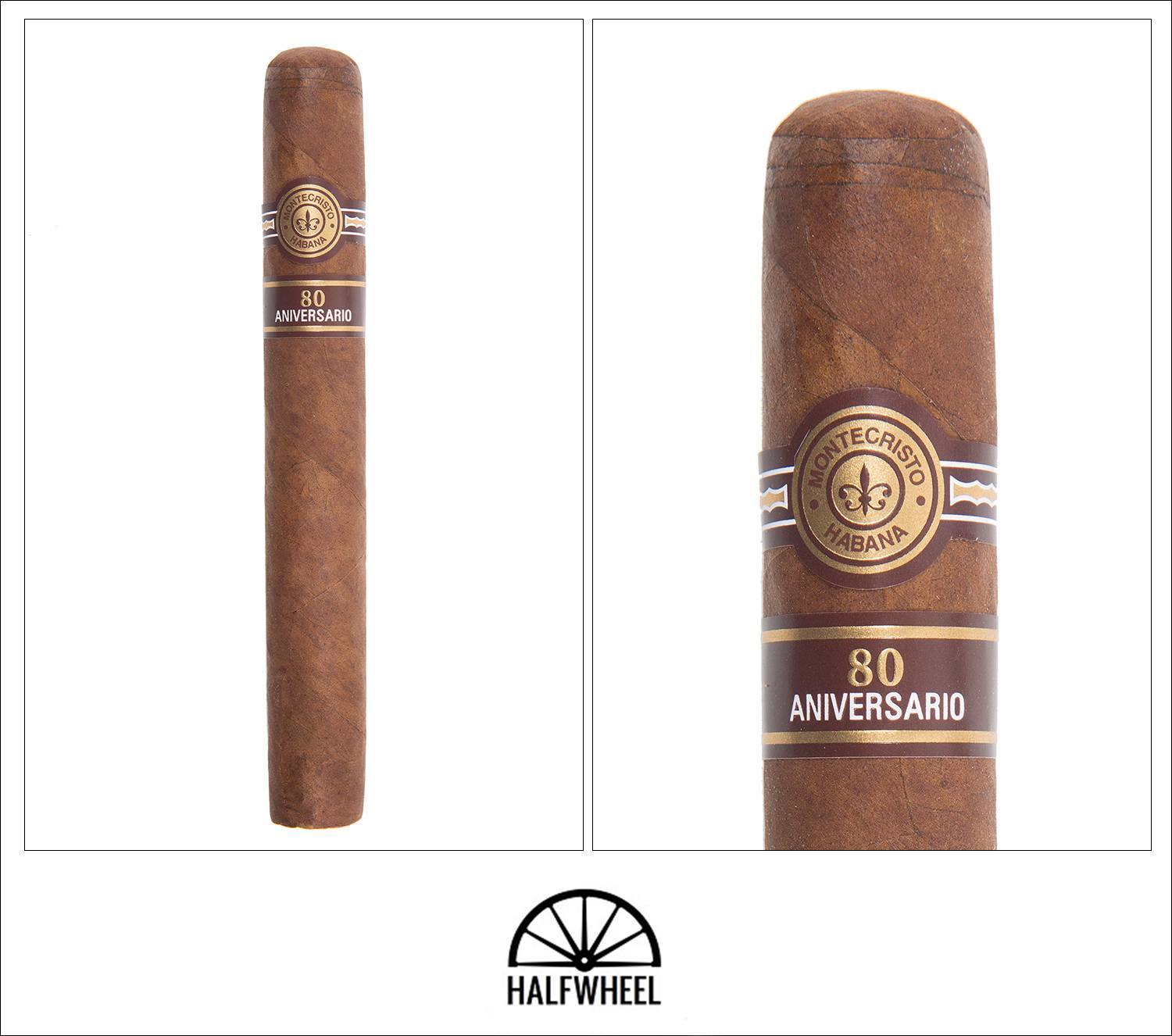 I’ve seen cigars from three different boxes and all have had dark, oily wrappers. It contrasts greatly with the new gold main band that was made specially for this release. From the foot, I pick up caramel, hot chocolate and some cinnamon, which sounds like a great beverage—except it’s 95 degrees in Dallas at the moment. The cold draw delivers some twang and spice, relatively elementary and honestly, not a great sign.

Whatever concerns come from the cold draw are immediately put to rest once the smoke enters my palate. There’s lots of layered earthiness, sweet cedar, some twang and burnt cedar and saltiness on the finish. Things only get better from there, with the Montecristo showing a medium core of peanut butter brittle, creaminess, espresso and wet earth. There’s neither an array of nuttiness, nor a very specific nut, but there’s a deep generic nuttiness. Overall, the most impressive thing is how smooth the profile is alongside its full body and medium strength. It’s fairly versatile in terms of smoking speed, but when you push it, a touch of spice develops on the throat. The smoke is a bit warm regardless, but the construction is otherwise flawless. 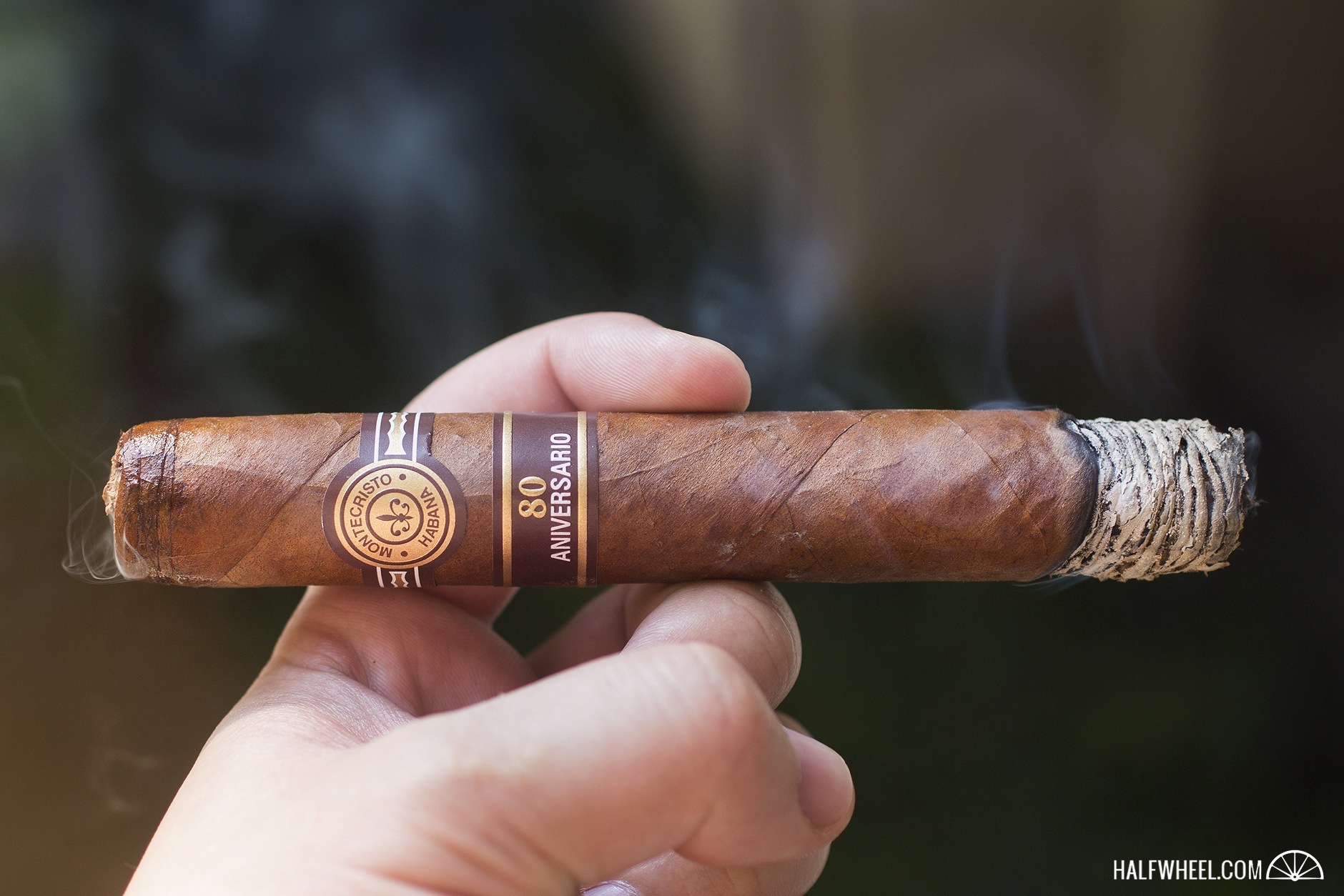 As the second third of the Montecristo 80 Aniversario begins, the nuttiness fades a bit, but it’s still there. There’s a bubblegum sweetness joining the profile along with some bark, but the earthiness and nuttiness cut through the sweetness quite a bit. The finish doesn’t change dramatically, with some creaminess underneath and a touch of saltiness. Strength picks up, almost hitting full by the end of the second third. 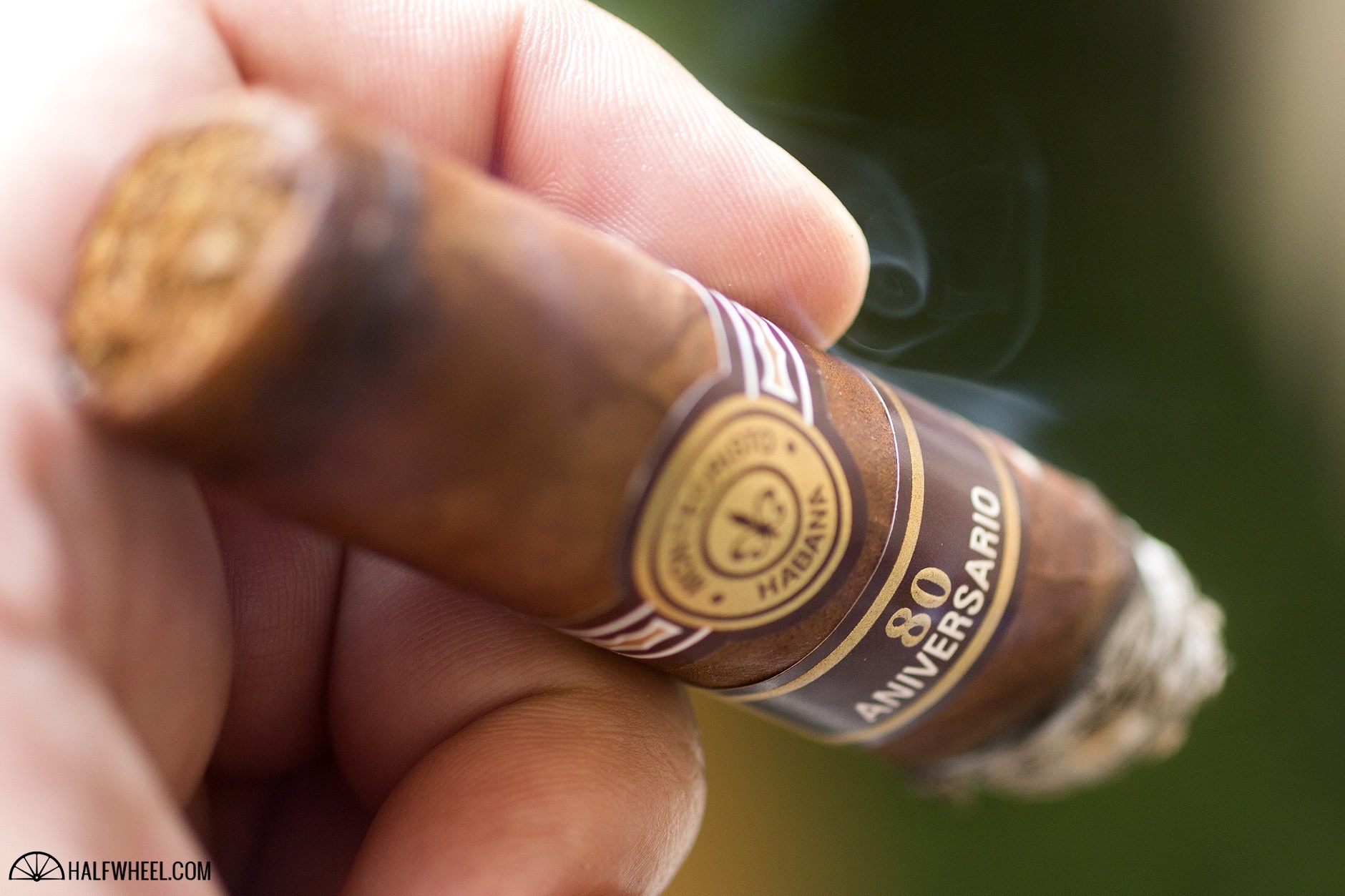 Flavors continue to build on one another up until the one and a half inch mark. At that point, some sour barbecue comes in, along with much more forward spice. I do have to touch-up the Montecristo a few times, which seems to negatively affect the flavor profile by causing some bitterness. The ending of the two samples I smoked were at pretty much the same point, but the reasons behind why I stopped smoking were different. On one sample, it was due to smoke temperature, on another because of smoke production. 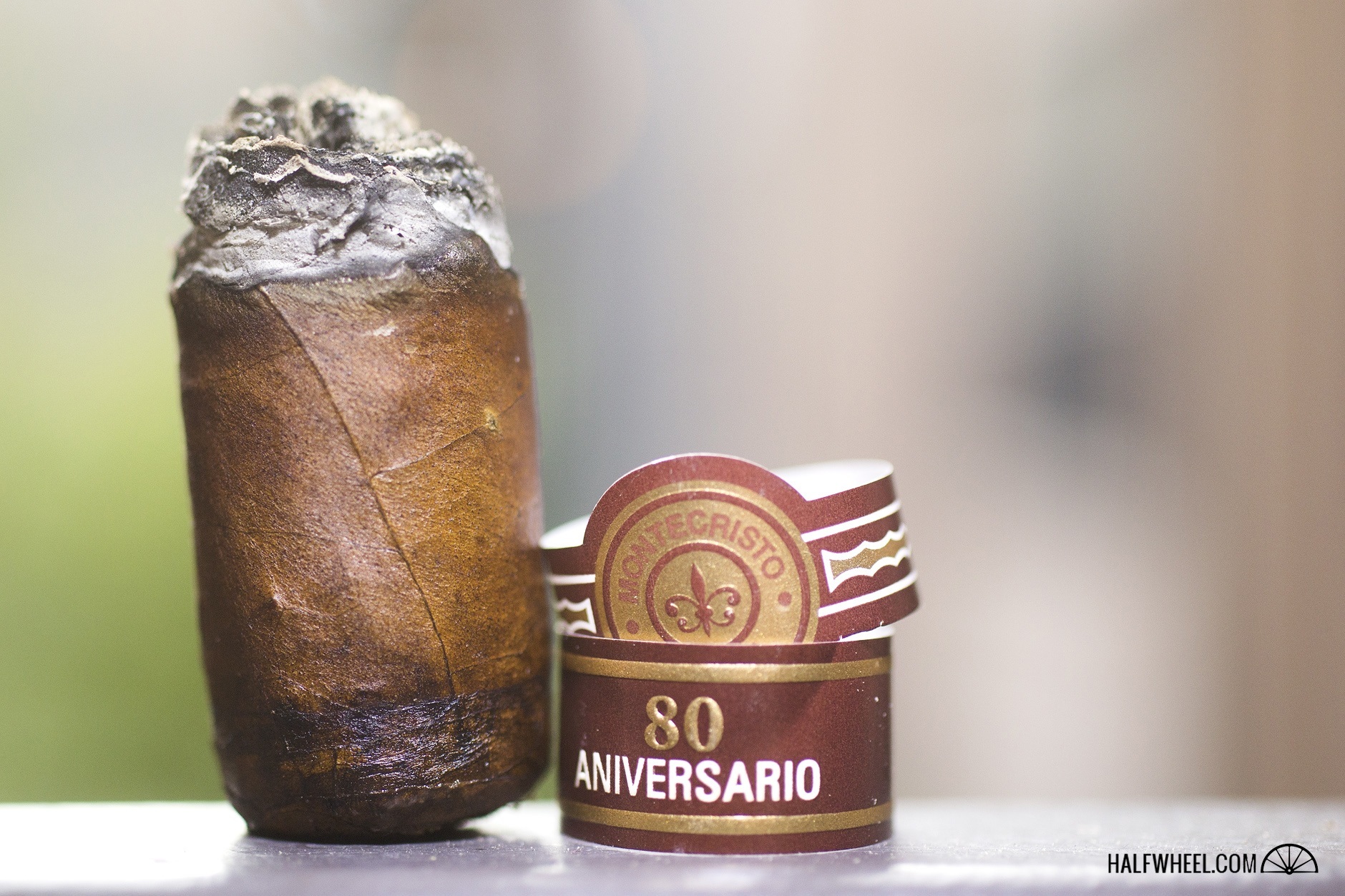 I’ve said it before, I’ll say it again—when Cuba wants to make the best cigar in the world, they can. While this wasn’t the greatest cigar of all time, this was one of the best new cigars I’ve smoked this year—and easily my first choice amongst cigars I’ve smoked this year that I’d like to have another. The Montecristo 80 Aniversario showed a balanced, yet rich and strong profile. For the first four-and-a-half or so inches, that was accompanied by a cigar that drew well and burned incredibly easily and evenly. There was definitely a drop off, something that I’m sure some think can or will be solved with time. Unfortunately, my one fear with “time” and this cigar is that it might negatively impact the strength. Whenever these are released, I’ll be sure to grab a few to see if the production versions match up—and if they do—I’ll probably be purchasing some for enjoyment.