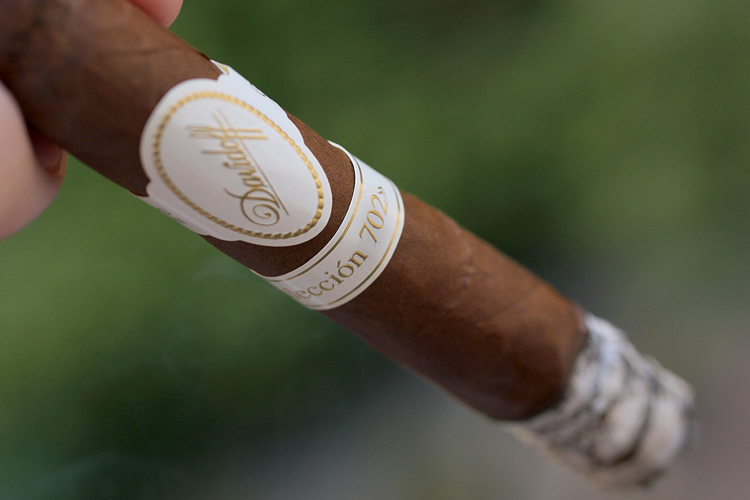 As we all know, limited editions have become an increasing part of the cigar marketplace in recent years. Their merits are regularly debated in cigar shops and lounges as well as on this site on an almost daily basis, and the opinions that are cast on them run the gamut. Love them, hate them, or feel indifferent towards them, they are a part of the cigar industry.

Davidoff is no stranger to limited editions, released under both a formal heading of their limited edition series, as well as a number of individual projects made for stores, anniversaries and other events or celebrations. Their formal Davidoff Limited Edition releases began in 1999:

While most would glance over that list and likely recognize a few that they may have smoked or heard of, there is one – the Davidoff Selección 702 – that generally sticks out in the mind of Davidoff fans and cigar connoisseurs as being one of the company’s best releases.

In the release sent out to retailers, the cigar was described in this way:

The release of Davidoff’s annual Limited Edition is always highly anticipated and this year is no exception. This magnificent Toro Especial format, with its inviting pristine wrapper and eye catching oily sheen, is the gateway to an extraordinary taste experience. An exclusive blend of Piloto, Olor and San Vicente tobaccos has been selected from choice growing areas to create intense flavor that is powerful yet smooth and refined. The Sun Grown Ecuador Selección 702 wrapper adds an elegant spice that is especially accentuated in this larger format cigar. A perfect smoke indulgence, the Toro Especial delivers notes of roasted coffee and cacao from the very first draw. This masterful, well-balanced and aromatic blend can only be experienced in the Davidoff Limited Edition 2009.

At the launch party, held in June 2009 at Bayard’s club and catering hall in New York City, Davidoff’s master blender Hendrik “Henke” Kelner told Gregory Mottola of Cigar Aficionado that the wrapper is an Ecuadoran hybrid that comes from three Cuban seeds. The company crossed a pair of seeds to create a wrapper they refer to as the 125, and that seed was crossed with another Cuban seed to produce the wrapper used on this cigar, the 702, hence how this cigar got its name. It was the lead story surrounding the Selección 702: this was the first time that this exclusive wrapper had ever been used.

In addition, a Davidoff spokesperson told halfwheel that the high usage of 80% ligero filler tobaccos from the Dominican Republic was something that made the Selección 702 unique and gave it a lot of strength compared to the previous releases. So between the new wrapper and the increased amount of ligero in the filler, you have a cigar that seems destined to make a unique impression upon those who smoke it.

Most of these have long vanished from the marketplace, though there are a few that are still out there, tucked away in retail humidors around the country, which is where halfwheel came across the ones for this review.

The Davidoff Limited Edition 2009 Selección 702 is a medium matte brown with no shine and little if any oil on it. Its veins are few, but pronounced, forming small, sharply angled ridgelines. A very interesting aroma comes off the foot of the cigar, offering a bright and somewhat light wood note and a bit of baking spice but no pepper. The former is hard to place, though cedar is probably the closest thing that comes to mind, and the end result is equally as unfamiliar but pleasant. There is no challenge when it comes to the air movement, and while the cold draw isn’t wide open, it’s close. Flavor-wise, it’s very mild and largely lacking in pepper, showing slight notes of cardboard, coffee and almond.

The first few puffs are much more peppery than I expected, both for a Davidoff White Label cigar and from what I could pick up from the cigar before lighting it up. It’s a bit of a sharp taste with a very dry wood note standing out and a combination of some baking spice and white pepper driving home the medium-bodied yet sharp kick that leaves a mark in the nostrils and on the tongue. An early retrohale packs a lot of white pepper that will shake up your sense of smell. The first clump of light grey ash breaks off when its length had reach just about an inch, only a few puffs after the accompanying picture was taken. With that first bit of ash gone, the flavor picks up some notes of almonds and other nuts, which provides both complexity and roundness to the flavor profile and makes for an enjoyable flavor transition.

By the time the second third of the Davidoff Selección 702 comes around, it’s readily apparent that this isn’t the familiar white label flavor profile as it packs much more of a pepper punch and lacks the musky funk that seems to be such a dividing part of that line. The photos don’t really do justice to the amount of smoke that the cigar emits; a breeze seemed to be connected to the shutter button on my camera. A second retrohale at the midway point is more intense than the previous one, almost too intense for my preference to be enjoyable and therefore useful. The sharp woodiness continues to build and become more prominent, and seems to be calling out for something sweet to balance it out – whether it be coffee with some sugar, a glass of rum, or even a soda. There are also some fairly distinct notes of espresso and continued hints of nuts that really help this cigar shine, while the creaminess of the smoke continues to develop.

A bit of rest seemed to help the sharpness die down as the cigar headed into its final third, and the smoke becomes rich, creamy and almost fluffy, delivering a much softer and well-rounded profile that has added some notes of almond and other nuts, along with a touch of foamed milk, similar to what you’d find on a cappuccino. When the cigar doesn’t get too hot, it keeps the sharp wood note and associated pepper and baking spices on a leash, which makes the cigar incredibly palatable and smooth. It’s only in the final inches when a touch of sourness starts to enter the equation, though generally only when the cigar is puffed on too rapidly. If you keep it cool, you and your palate will be rewarded with a clean, smooth finish that packs a slightly diminished remnant of its most flavorful earlier sections.

About the only thing I could ask for from this cigar was to somehow transport me back to 2009 when they were much more readily available so I could buy a few boxes of these. Can you still find them? Yes, and some retailers are selling them at a fairly reasonable price, that is, somewhat below MSRP. That said, this is still a cigar that carries a price tag of around $25 per stick, and that's not going to be the easiest thing to swallow, regardless of how fantastic it is. Regardless of the price, this is about as good of a Davidoff as I have ever had and I can't say enough good things about it. It's balanced, it has both upfront and subtle flavors, it burns very well, it comes in 10–count boxes… the list literally could go on and on. If you can find some of these and don't mind the cost, buy them. Assuming they have been properly stored, they should be fantastic.