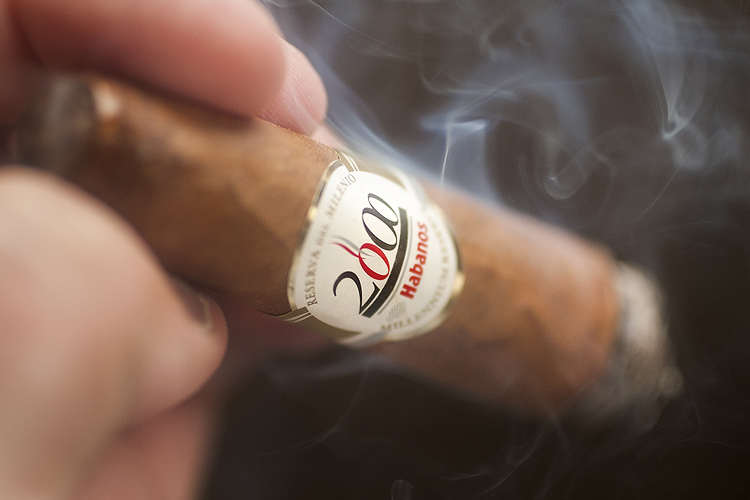 In early 1999, Habanos S.A. released three different cigars from three different marcas under the Reserva del Milenio (Millennium Reserve Series) to celebrate the Millennium during the Havana Festival. Each of the releases were very different vitolas, but all were adorned with the exact same band.

CubanCigarWebsite.com says the following about the release:

The final released in late 2002 was due to a quantity of the original jars being rejected (mainly) due to lid imperfections.  These boxes bear a OSU Nov 2002 release code.  These jars contain the 1999 production cigars, which were stored until replacement jars became available.

The Cohiba is a gorgeous example of a cigar with a dark honey-colored looking wrapper that has a noticeable reddish cast and plenty of oil left. There are more bumps down the length than I expected, but there is a nice amount of give when squeezed. Aroma from the wrapper is strong and sweet cedar, leather, nutmeg and hay. The cold draw has strong lemon zest-like citrus and sweet leather.

The Cohiba Millennium Reserve Pirámides starts out with strong flavors of creamy leather, citrus, floral and black pepper on the retrohale. It has a great sweet honey background note that really pulls the rest of the profile together. There is some nice spice on the lips for the first 20 puffs or so, but it slowly starts to recede as the first third continues. Smoke production is above average and the burn and draw are excellent so far. Overall strength ends the first third at just a little below medium, but is obviously going to get stronger.

A floral sweetness becomes fairly strong midway through the second third, developing from the sweet nutty background. Other flavors of milk chocolate, hay, nutmeg, leather and espresso dominate, but one flavor is never overly strong for too long before another one takes over. The profile is extremely sweet and is retaining that black pepper on the retrohale, which makes for a great combination. Construction is still wonderful and the strength as increased as expected to a solid medium.

The final third of the Cohiba continues the sweet and peppery blend with the sweetness morphing into a great vanilla note and the black pepper remains a major player. Other notes of espresso, hay, chocolate, earth and cedar come and go. Some of the sharp citrus from the first third makes a comeback as well, albeit not as strong. Both the burn and the draw of the Cohiba are excellent until the nub. The strength stalls out slightly higher than medium. It never gets bitter no matter how far I smoked it down, and the nub was cool to the touch when I was finished.

I have never been the biggest fan of the Cohiba profile in general and the fact that the Cohiba Millennium tastes almost nothing like any other Cohiba I have smoked is probably why I liked it so much. In fact, one word kept popping into my mind as I was smoking this cigar—balance. Everything about this cigar is balanced with perfect flavors and construction working together. Great construction and great flavors to the nub were just icing on the cake. Easily one of the best Cubans I have smoked in years. I just wish I had a few more.