In 2009, Habanos S.A. celebrated the 40th anniversary of the Trinidad brand by releasing a Robusto in the Trinidad line at the Havana Libre hotel during the XI Festival del Habano in Cuba. It was sold in 12 and 24 count boxes, but sadly in 2012 it was announced that both the Robusto T and the Robusto Extra were being discontinued bringing the total number of regular production vitolas in the Trinidad brand down to three.

Here is what I said about the Trinidad Robusto T back in February of 2011:

While I have not smoked as many Trinidads as I have other Cuban marcas (Partagás, Bolívar, Cohiba etc), I think this is one of those cigars that people either love or hate. The profile is fairly unique with strong tea and floral flavors, along with a nice creamy sweetness. However, it is not a strong cigar at all, coming in at the milder side of medium. Construction was excellent on both samples and I was extremely impressed with the richness of the profile. The main problems are the facts that: A) Habanos is discontinuing them (along with the Robusto Extra) and B) If you can find them, they are not exactly cheap, especially when compared to just about everyone’s favorite vitola in theTrinidad lineup, the Fundadores. Having said all of that, I am glad I got a box and will be putting the rest away for a while, to see how they age.

Like the first samples I smoked for the original review, the Trinidad Robusto T is a nice looking cigar, with a honey brown wrapper that is fairly smooth to the touch. There are quite a few bumps running up and down the length, and one major seam as well. It is perfect when squeezed, and the aroma off the wrapper is a combination of barnyard, coffee and sweet cedar.

The Trinidad Robusto T starts off with strong flavors of tea leaves, oak, citrus and earth interspersed with a slight sweet floral note that comes and goes throughout the cigar. There is very little spice on the lips, but pepper on the retrohale starts picking up after the first third, and peaks in strength just after the halfway point before receding again. While the main core note of creamy and slightly bitter tea leaves does not change from the start to the finish, the other flavors strength changes back and forth during the duration. The sweetness that is present is never very strong and shifts from a honey like note to the aforementioned floral note at a whim. 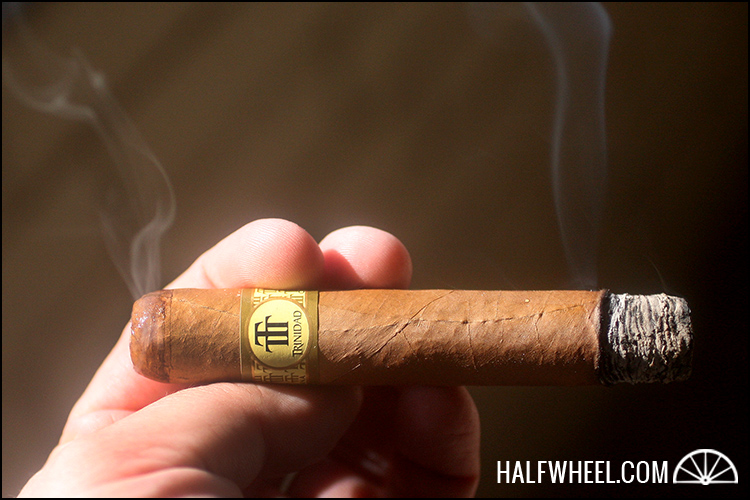 Construction-wise, there is absolutely nothing to complain about, with a perfect draw and burn for the entire smoke. The ash is extremely well-formed and stays well past the 1 1/2 inch mark staying together nicely when put in the ashtray. The strength is never an issue, and gets no further than a solid medium.

Reading some of the comments on my original review, this is definitely one of those cigars that people either love or hate. The main note of tea leaves is quite distinct, and is present throughout the smoke, so if you don't like that flavor, this is not going to be the smoke for you. However, I love the profile, and it really stands out to me as fairly unique. The cigar itself is almost identical to the first time I smoked it over six months ago, but the flavors it did seem to be ever so slightly more balanced overall. An extremely good cigar, great in the morning with a cup of coffee and I am glad I have more to smoke and age.