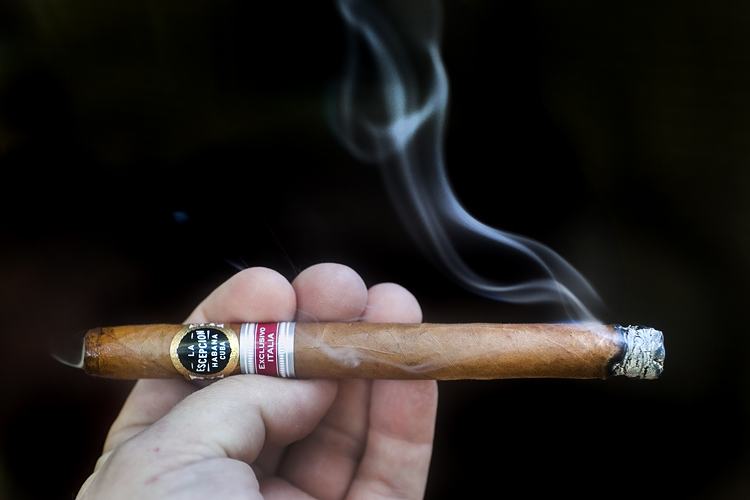 In 2011, Habanos S.A. resurrected what was commonly thought to be the strongest Cuban blend for the time they were in existence, the La Escepción. The brand is one of the oldest Cuban marcas, introduced sometime in the 1850s by owner José Gener, who also founded the Hoyo de Monterrey brand in 1865. At the time of its discontinuation in 1989, generally regarded as being due to its unpopularity, the La Escepción marca consisted of only a few vitolas.

The La Escepción Selectos Finos is a 6 1/2 x 38 Panatela released as part of the Edición Regional program for the country of Italy. Only 2,000 boxes of 25 were released and acquiring them was especially difficult with the added fact that it is illegal to ship tobacco products outside of Italy.

Here are my thoughts from my original review back in January of 2012:

I was honestly a little surprised to see the size that this cigar ended up being, as the modus operandi with Habanos has been larger and larger RG. However, after smoking a couple of them, I have to say they absolutely nailed the blend, size and RG on this release — complex, extremely flavorful, fairly strong, almost perfect construction and just a great vitola. Indeed, the only negative I could find about this cigar is the price. The La Escepción Selectos Finos is easily the best Cuban I have smoked in this admittedly young year and one of the best ERs in the last few years, period. My advice is that if you can find some, buy them.

The La Escepción Selectos Finos is an absolutely gorgeous specimen with a red-brown wrapper that is fairly smooth to the touch and sports a hint of oil. Resistance when squeezed is appropriate, not too soft or hard, and the triple cap that is present is perfectly applied. The aroma coming from the wrapper is a combination of strong barnyard, cedar, leather, hay and coffee.

The cigar starts out immediately with intense flavors of cedar, milk chocolate, hay, espresso and a sharp citrus that reminds me strongly of lemon. There is also a wonderful nutmeg sweetness that is evident from the first puff that only gets stronger as it reaches the halfway point. It combines very well with a slight saltiness on the lips. Around the start of the second half, there is a significant increase in the amount of pepper on the retrohale, which continues until the end of the cigar. The second half features notes of slightly bitter espresso, dark cocoa, leather, earth and hay, with the dominance of each flavor shifting in and out throughout the smoke.

Construction-wise, the draw was excellent. Although the burn was a bit wavy during the first third, it evened up nicely after that and was never close to bad enough to negatively impact the experience. The smoke production was well above average and the ash is extremely well-formed, although it does not stay on the foot for longer than a half inch before falling at any point. The strength of the La Escepción ranges from a mild-medium at the start to well above medium by the end of smoke.

The La Escepción Selectos Finos was very, very good when it was released and it is even better now that it has had eight months of age. Great construction, great smoke production, wonderful finish and an almost too complex profile that changes on a dime throughout the cigar. I have probably smoked a half box of these since they were released and every one has been spot on consistent in terms of profile, construction and complexity. Interestingly, the time it has aged has seemed to add not only a bit of pepper to the profile, but also more sweetness. This is still one of the best Cubans I have had, I love everything about this release and my only regret is that wish I had 10 boxes to age even longer.