In the world of Cuban Edición Regional releases, there is an interesting pairing that you may not be aware of: the Ramón Allones marca and Lebanon.

As has been covered numerous times, the Edición Regional program is one where distributors can create a unique size for one of the non-global brands and release it exclusively to a certain region of the world. Sometimes it is limited to a certain country, other times to a broader area that spans borders and includes several countries. But for Phoenicia Trading A.A., a unique match between one brand and one country has been established.

As proof, there have been seven Edición Regional releases for Lebanon, all under the Ramón Allones marca:

The reason for this close association is that Ramón Allones is considered the “local brand of Lebanon” and is very popular in the market, according to the company’s website.

For the fourth installment in the series, Phoenicia Trading A.A. returned to the sublimes vitola it used for the debut Phoenicia release in 2008, a 6 1/2 x 54 double robusto that has generally been reserved for Edición Regional and Edición Limitada releases. In fact, there is not a current release among any of Habanos S.A.’s brands that use this particular size.

The name Eshmoun was picked out of Phoenician heritage; Eshmoun was the god of the ancient city Saida and was known for having fertility and healing abilities. Eshmoun’s power and reputation were known throughout the region, spreading into neighboring cities and countries including Beirut, Sardinia and Cyprus, according to the company.

As such, the company wanted a “well built cigar” to bear the name of this god, using tobacco that had been aged for four years, as it comes from the same supply as that used to make the original Phoenicio. The Ramón Allones Eshmoun is a sizable cigar, as the sublimes vitola is one of the bigger ones in the Cuban portfolio. The wrapper is an attractive shade of toffee-hued tan that gets detracted from by a number of sizable veins and a bit of shade change at the head and foot of the cigar. It’s fairly firm to the touch save for a soft spot at the foot, while the head is on the firm side. Speaking of the head of this cigar, the first sample seems to have a bit of overkill with the cap, as in one spot I can count what looks like six lines of tobacco, though it may be a bit of a visual deception as they consolidate to three on the other side. It doesn’t look overdone in terms of quantity of tobacco, but visually there is quite a bit happening. There are also a few spots where the wrapper isn’t laid perfectly flat on the cylinder, with seam lines showing a bit of space underneath. From the foot, aromas of plain popcorn and a sweet apple candy are present, neither overly forthcoming in their introduction. The cold draws on the first two samples are fairly firm and don’t present much flavor at first, opening into a bit of cream and lumberyard wood with additional draws.

A relatively mild and restrained flavor leads off the Ramón Allones Eshmoun before white pepper gets sprinkled in along with just the slightest touch of mineral undertones. The draw can be a bit tight at times and the burn has been slow but steady in the first inch, revealing a tightly stacked clump of ash. Two of the samples both had a small scab of unburnt tobacco remain before the ash dropped, but otherwise there hasn’t been a burn issue, with plenty of smoke production. Trace amounts of sweetness seem to be calling out, as there’s a bit of a bubblegum/cotton candy thing trying to happen, though the efforts are minimal at best. The final puffs of the first third bring on more pepper and the first increase in flavor after what has been a very mild start. It’s only a matter of puffs before the Eshmoun finds some traction with the pepper it introduced at the end of the first third, and while not an overly peppery cigar at this point, it has crossed into medium body and strength territory. Without question, the nose gets the bulk the pepper, as the palate is still mired in a fairly bland flavor offering. There is a bit of generic wood as an undertone that also reappears in the aroma, but it falls well flat of contributing to the profile enough to push the cigar into the territory of being called complex. In one sample, the smoke picks up a slightly creamy texture that is very enjoyable as it adds body, softness and flavor to the moment. While the flavor has picked up, it’s at the expense of the burn line, which has become much more erratic than it was in the first third. The ash is also less dense and begins a bit of flowering near the midpoint of the cigar, continuing into the final third. 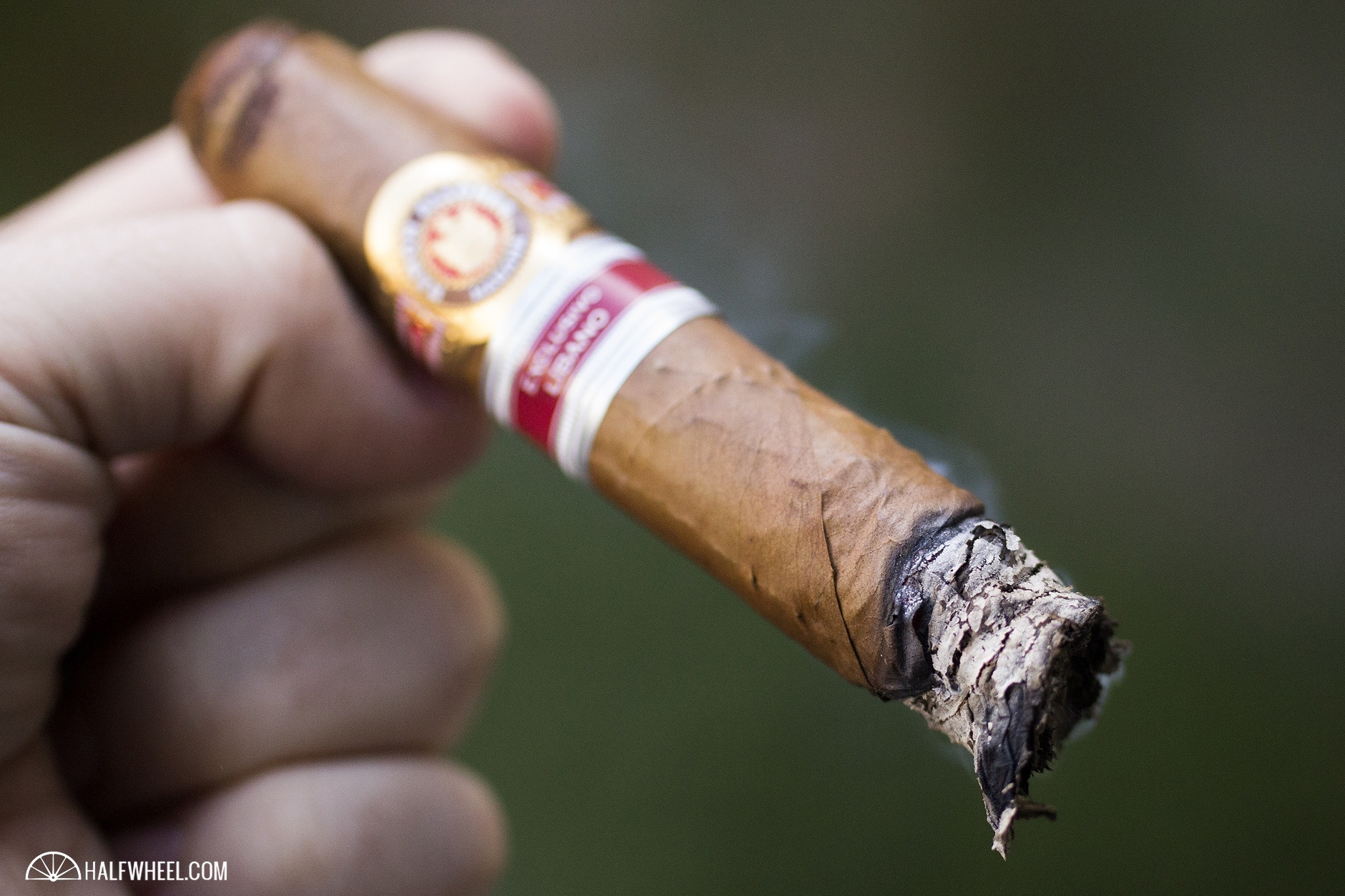 After losing some of its pepper-fueled momentum, the Ramón Allones once again uses it to amp up the flavor and aroma as the final third gets underway. A new base flavor has started to emerge, as chalk and a bit of mint come together for an interesting combination that almost reminds me of toothpaste, though not nearly as intense of a flavor. While I had hoped the cigar would correct its burn issues on its own, I finally have to pull out the torch and give it a quick relight, at which point the pepper continues to round out and becomes fuller; not just stronger but also heartier and fuller in the nose. The cigar gets a bit rough on the palate in the final two inches or so as the smoke makes a beeline for the back of the throat. Combustion issues also arose in the final third, requiring a number of frustrating relights before it was finally time to put it to rest. As a fan of the Ramón Allones marca, and in particular the Specially Selected vitola, I was intrigued to see how the blend would perform in a markedly bigger ring gauge. Unfortunately the result was disappointing, as the cigar skewed towards bland and boring, save for the one linear note of fairly generic pepper that salvaged things ever so slightly. An abnormally tight draw only compounded the problem, heaping physical exhaustion onto a nearly three-hour ordeal of a cigar. I’m not sure where exactly to lay fault for this cigar being such a disappointment, but I’m also not sure it really matters.