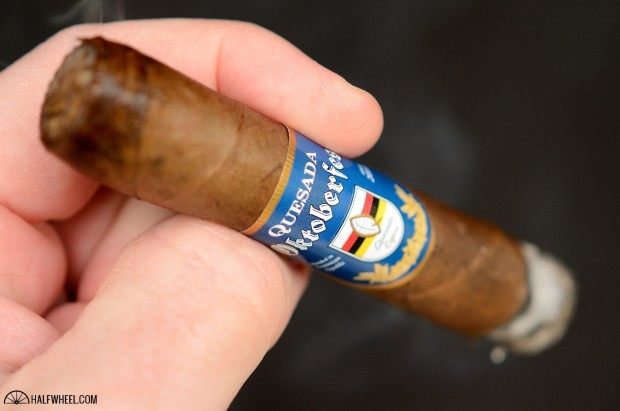 In 2011, Quesada introduced a new German beer themed line called the Oktoberfest. Since its introduction, the Oktoberfest line has received many new sizes including some very limited store and event-only exclusive sizes.

At the 2015 IPCPR Convention and Trade Show Quesada once again unveiled two new sizes – the Das Brauhaus, a 4 1/2 x 60 double perfecto and the Double Bock, a 7 x 47 churchill. The Double Bock wasn’t the only churchill introduced this year in the line. Tampa-based retailer Thompson Cigar also received a churchill in the form of the 7 x 50, Präsident.

With those two releases, that brought the Oktoberfest line to a total of 13 different sizes. With the exclusion of some very small but noticeable dark dots, the wrapper is an extremely even, muted brown and has a soft and quite oily feel to it. Overall the cigar is quite firm with almost no give at all, except a slightly softer spot at about the midway point. There is a damp, earthy aroma along with some musty old wood notes coming off the wrapper – odd, but not off putting like it might sound. The cold draw is much different, with a mild but pleasant notes of dried fruits, caramel, some fresh hay and a hint of vanilla.

The first third starts out with a plethora of spice notes, some of the dried fruits from the cold draw, a touch of espresso and a smoky oak note. Starting off the burn is fairly even, with a lazy wave to it that stays mostly even, but not what i would call perfect. The ash is very dense and almost has a smooth surface—quite interesting and nice to look at. Smoke production is moderate to plentiful, there is enough there to enjoy the aroma but I do find myself wishing for just a little more. The profile settles down a touch, blending the spice, fruits, espresso and oak a little more smoothly, with no specific note stepping out front. As I move into the second third of the Präsident, the profile develops a touch of sweetness, giving the spice and fruits a little bit of an edge on the espresso and smoky oak. The burn has started to go sideways – fairly sharp and even to itself, but almost reaching a 45 degree angle before I initiate a touch up. While the draw is ideal, it seems slightly open and unproductive, which seems to be the reason the smoke production is just moderate. The profile doesn’t seem to be changing much, continuing on with the same notes of spice and fruit up front with the oak and espresso more in the background. The sweetness is still there, though it seems to have died down a bit after its sudden appearance. Shifting into the final third, the flavors have shifted a bit themselves as well. The smoky oak from before has grown stronger, but changed into more of a charred oak note and adding a little harshness to the rest of the profile. Spice, dried fruit and espresso are still around, though they are slowly getting overpowered by the harsher charred oak. The burn doesn’t seem to want to recover from the angled burn line, almost continuously needing help to stay even every inch or so. The ash however has remained nicely dense, holding on long enough to keep the cigar burning cool. As the Präsident wraps up, it continues to smoke cool, but the harshness has started to overpower what little remains of the rest of the flavors, ending the cigar on a slightly disappointing note. There are sizes in the Oktoberfest line that I enjoy, and then there are some that aren’t my cup of beer. The churchill size is something I usually enjoy, but for some reason the Oktoberfest blend doesn’t really hit home for me in this size. The burn issues I experienced to varying degrees certainly didn’t help matters, but mostly it was the profile that fell somewhat flat. Starting out it showed promise of an enjoyable flavor lineup, but there wasn’t much movement or change, and what change did happen only introduced a harshness to the profile that overpowered the rest. For the size it’s priced well, but I think I’ll find myself reaching for one of the smaller sizes more often than not.