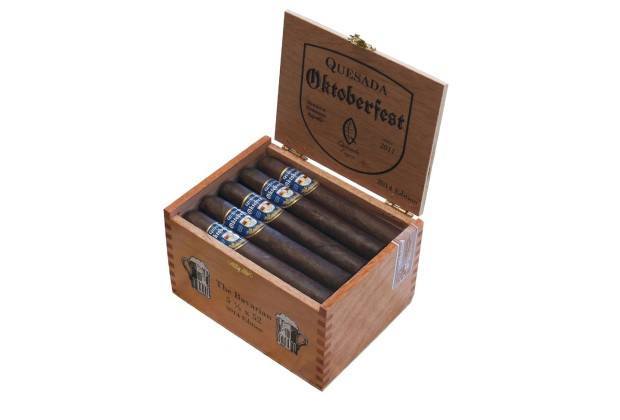 For the fourth consecutive year, Quesada’s Oktoberfest line will be heading to a variety of fall events centered around Oktoberfest-style beer and the cigar the Dominican company has made for pairing with the heavier beer. This year, things will look a bit different, literally.

Instead of the white, German-flag themed bands, the company has created blue bands part of the efforts to help consumers and retailers better differentiate between each year’s release. In addition, a new size will be featured at events, the 6 3/4 x 50/33 Salomon Press, the company debuted earlier as part of the Q40 line.

It’s the tenth different vitola released under the Oktoberfest line. Six are regular production, two are limited to events, one went to Smoke Inn as part of the company’s Microblend Series and another was made as part of a trade show promotion. Last year, the company raffled off an opportunity for two retailers to commission a specific vitola in any of the company’s lines. Last year, Illinois-based Binny’s chose to have a lancero made in the Oktoberfest line. Quesada will raffle off another opportunity at the upcoming 2014 IPCPR convention and trade show which begins July 19. The previous event-only cigar has been discontinued.

Retailers will have their first chance to see the cigar at the 2014 IPCPR convention and trade show later this month. The Oktoberfest is made at the company’s Dominican factory, Quesada Cigars.