There is not a cigar maker that is so associated to a singular look of a cigar like Oscar Valladares and the tobacco leaf-covered cigars sold under the Leaf by Oscar line.

Oscar Valladares makes other cigars, including those for his own company, but he is best known for the Leaf line. While the Leaf line is certainly one of, if not the most interesting way to package a cigar we’ve seen in quite some time, it’s not that exciting. At the 2019 IPCPR Convention & Trade Show, Oscar Valladares Tobacco & Co. showed off two different striking cigars: Wild Hunter, packaged in hunting regalia, and a very purple-themed line called Super Fly. 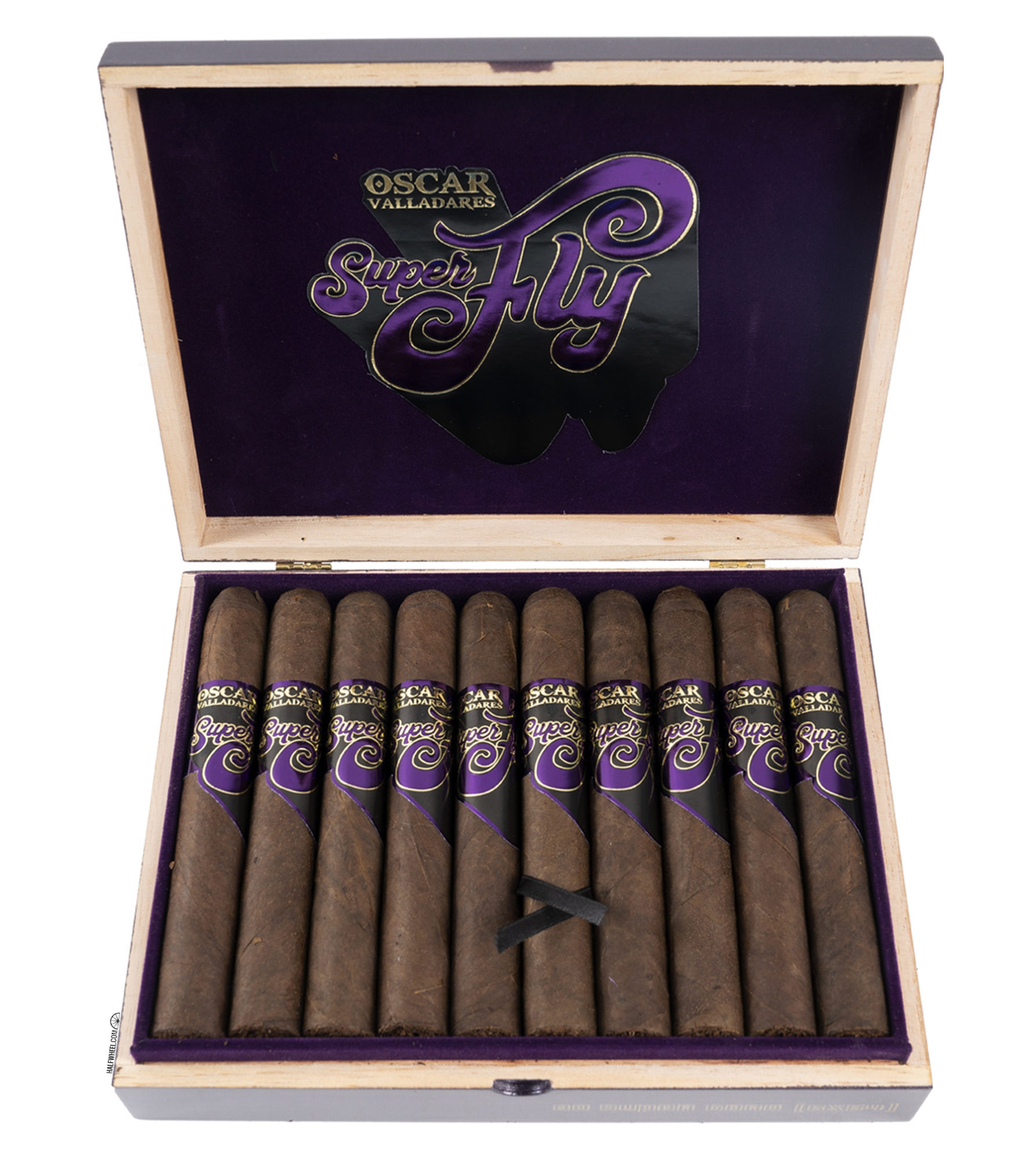 The company says that it is the strongest cigar it has made to date. It uses a Mexican San Andrés wrapper over a Honduran binder and fillers from the Dominican Republic, Honduras and Nicaragua. The dark wrapper and rich purple packaging remind me a bit of the OpusX Purple Rain. This wrapper isn’t that dark, few cigars are, but it is very dark. Aroma off of the wrapper is very sweet with chocolate and creaminess, around medium-plus. The foot is remarkably similar with those two flavors dominating over some lighter hay notes, though the overall effect is probably closer to medium-full. I was fairly surprised by the lack of difference between the wrapper and foot aromas, so I guess it isn’t that all too surprising when the cold draw tastes similar, though it’s been quite some time when I’ve had a non-flavored cigar where this has been the case. It’s medium-full, dominated by sweet chocolate and some vanilla, though I find some blackberry jam flavors as well. Of note, the draw is a tad bit open.

Despite a heavy dose of chocolate on the pre-light parts of the cigar, there is none of it once the smoke hits my mouth. Instead, the Super Fly begins with earthiness, peanut butter and an almost nacho-like salty corn sensation. Altogether it’s medium-full, though a sharp contrast to the pre-light notes. The first third of the Super Fly is similarly without chocolate, instead providing a good dose of earthiness and orange peel upfront along with retrohales of fruitiness, oatmeal, some leather and a flavor that reminds me of tobacco sweating at a factory. The finish is creamy with some oatmeal and a bit of an herbal flavor. The profile is full, body is medium-full and strength is medium-plus.

There’s still citrus, but by the second third it’s shifted from an orange peel to more of a lemon characteristic. It’s still mainly nutty upfront and for a good bit of the middle portion of the cigar, I wonder what actually changed, at least when it comes to the flavors in the mouth, though that’s not a bad thing. Retrohales are much stronger with Ritz crackers, minerals and A-1 steak sauce. The finish is a mixture of a very deep peanut butter flavor mixed with some bitter lemonade and some pepper. I think the flavors themselves are more decadent than they were earlier in the cigar, but they aren’t as complex. Flavor is full, body is closer to full and strength is medium-full. All three cigars need a touch-up to keep the cigar burning until the end. The final third of the Super Fly has a mouth flavor that is very similar to the first two thirds with nuttiness leading the way over strawberry, earthiness, creaminess, a much more restrained nuttiness and some white pepper. The finish has walnuts covering up a soapy characteristic and some faint white pepper. Flavor is full, while body and strength are now medium-full. One touch up is needed on two cigars to help a declining smoke production. I'm not entirely sure what to make after smoking three of the Super Flys. It's a solid cigar with some flaws, but also one that shows potential of being a lot better. When thinking back to the rest of the cigars I've smoked from the Oscar portfolio, I'm led to believe that this is probably right in the middle. I haven't smoked the Wild Hunter that Patrick recently raved about, but I think this falls short of the Altar Q and The Oscar, though better than the Ciseron Edition and 2012.