“The lack of name is going to make this a lot more challenging to review.”

That’s what I texted Skip Martin, RoMa Craft Tobac’s co-founder, a few days ago when trying to get more information about this cigar. Officially speaking, this cigar doesn’t have a name, but some people call it Narwhal and Martin said that was best in describing it.

The cigar doesn’t have a name because it’s not sold, a perfect candidate for our annual holy grail week.

It’s a 6 3/10 x 58 perfecto made in the CroMagnon Black Irish-style, meaning it uses the regular Connecticut broadleaf wrapper along with green Ecuadorian candela accents.

Martin said that less than 500 have been made. Predictably, getting one is tough. Martin mentioned that some guests at the Nica Sueño factory have received them, this one came from a friends and family-like event that I was at with Martin and Michael Rosales, another RoMa Craft Tobac co-owner. 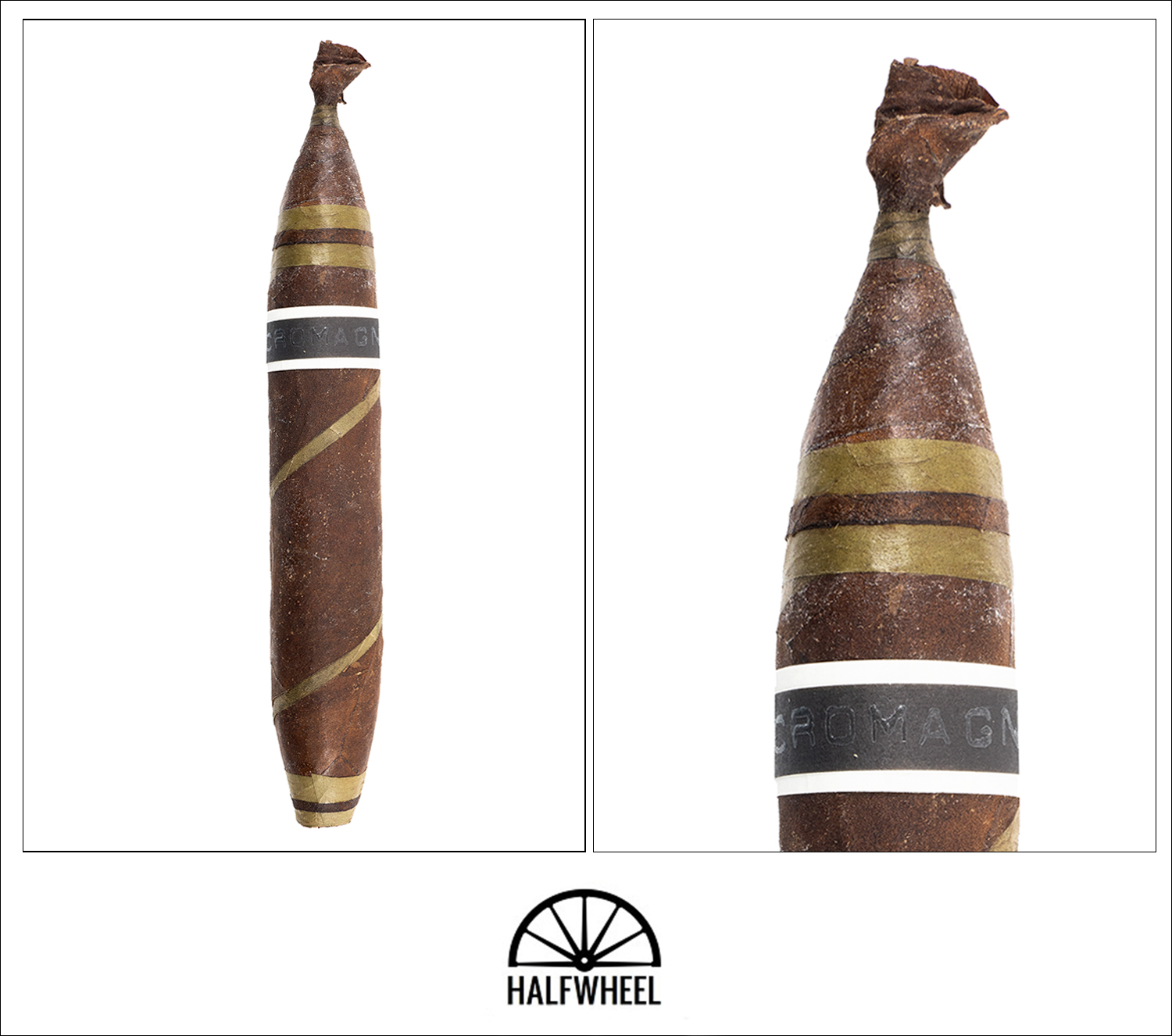 Once you get by the two defining features—the green stripes on the cigar and the cap—it looks like any other CroMagnon or Fomorian. The Connecticut broadleaf wrapper is dark and oily with a mild amount of veins, while the candela wrapper is a very muted green color. In what seems to be a recent trend with cigars I’m reviewing, I smell barnyard and some greasy potato chip flavors. It’s challenging to get much of anything from the foot, just a generic sweet cookie flavor and some oregano, both very mild. The cold draw has a medium profile with cinnamon, floral flavors, blood orange and some chocolate.

Once I start lighting the Narwhal, I immediately smell a bizarre mixture of barnyard and a charcoal-like flavor that reminds me of sitting at a yakitori counter. As far as the initial flavors in the mouth, the CroMagnon doesn’t provide a ton of actual smoke but there’s some earth, a Ritz cracker-like flavor and something that reminds me of soggy fried chicken breading. Flavor develops to a mixture of minerals, garlic powder, earthiness and a mild amount of pepper. Retrohales have a ton of black licorice, some cloves and this weird earthy flavor that I can’t quite place precisely. At about the half-inch mark I wanted to make another cut to help the smoke production, but once I finished taking the picture below, things get better. I end up making a small cut and the smoke production dramatically improves. I’m still struggling to pick up this dark earth flavor, which gets a bit stronger right up until the halfway mark. The other mouth flavors from the CroMagnon Narwhal are black licorice, orange bitters and a more pedestrian earthiness. If I don’t retrohale, there’s a great wheat-like finish. But retrohaling is really where the flavors shine: white pepper, orange zest and a bit of sawdust. That white pepper flavor gets stronger until about 25 seconds into the finish before some berry sweetness comes in. Flavor is medium-full, body is nearly full and strength is full. The first order of business in the final third is dealing with a piece of the middle of the cigar that isn’t burning completely and has to be knocked off to a point where I might have been better off using scissors. I could sense for the previous inch or so that the middle wasn’t burning, but after the more advanced ash removal and a touch-up, the smoke production is back up to well above average levels. Flavor-wise, the profile shifts to a more generic earthiness with some honey, raisins and a burnt sourdough bread flavor underneath it. Retroahles are toastier with the raisins coming through a bit more than in the mouth. There’s a Fernet-like flavor as well, something I’ve found on previous CroMagnons. At times, the pepper shifts to a sharp wasabi-like sensation that is much more overwhelming than the white pepper before it. Flavor continues to be medium-full, body is probably a touch softer but still medium-full and strength is definitely full. While the Narwhal still packed plenty of nicotine strength, the flavors indicated that this is a cigar that’s been in a humidor for at least a few years. It was still enjoyable, but I’d take a relatively fresh CroMagnon any day of the week, and that makes me wonder what this would have tasted like with just a few months of aging, similar to buying a CroMagnon off the shelf. Much like Padrón, I’ve found my favorite CroMagnons to be the ones that have just arrived in stores and that certainly applies here. While an unsmoked Narwhal looks pretty in your humidor or on Instagram, it's much better smoked.