In 2000, Camacho launched a cigar line that “redefined full-bodied cigars” according to CigarCyclopedia.com. It was the Camacho Corojo, a Honduran puro that used the varietal that the country is best known for producing and that Camacho and the Eiroa family is most closely associated.

It was released in a number of vitolas, including standard sizes like a Churchill, toro and torpedo. But arguably the most notable vitola was the Camacho Corojo Diademas, a massive 8 x 60 figurado that was offered in 10-count boxes and presented each cigar in foil paper wrapping. 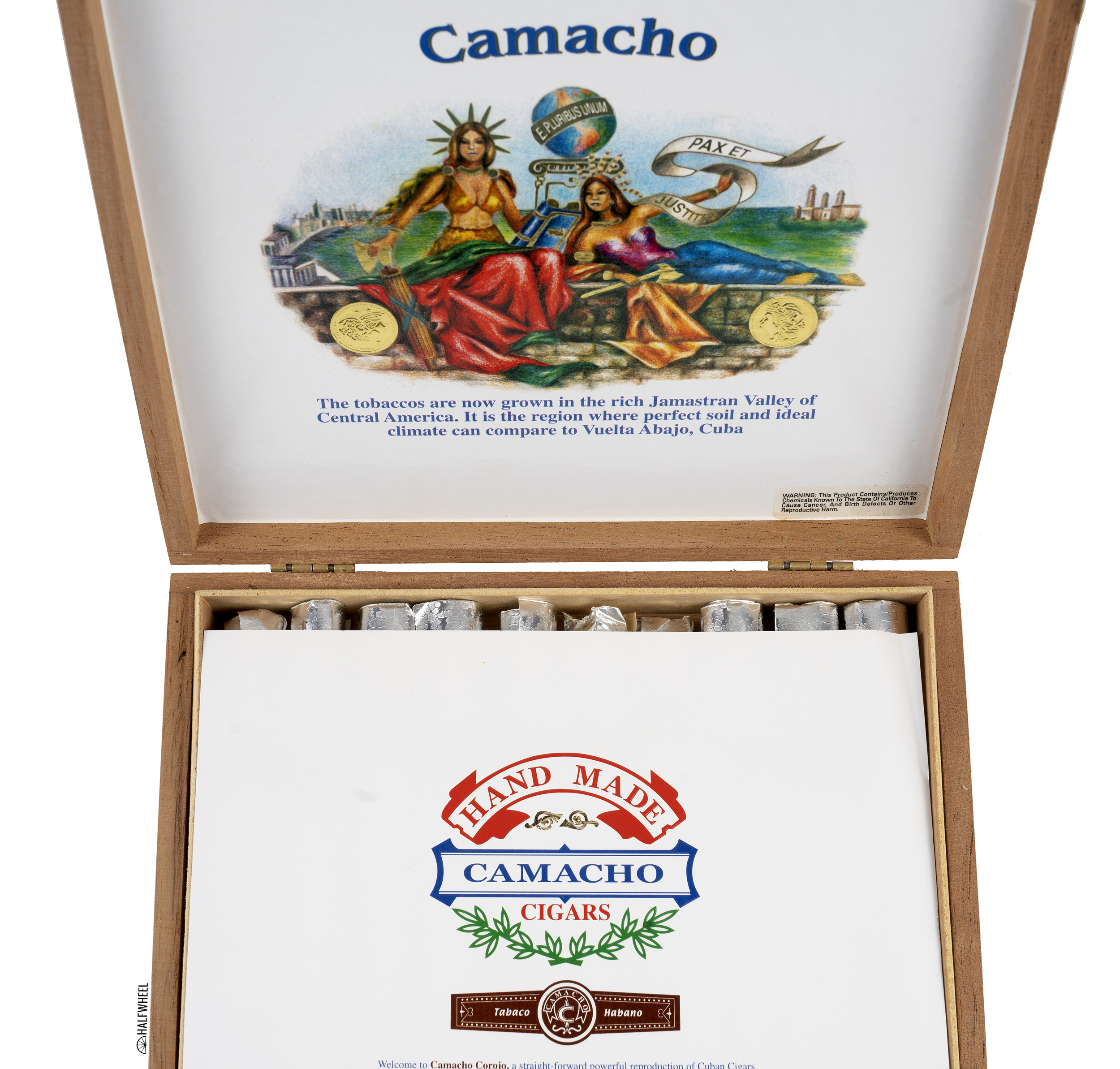 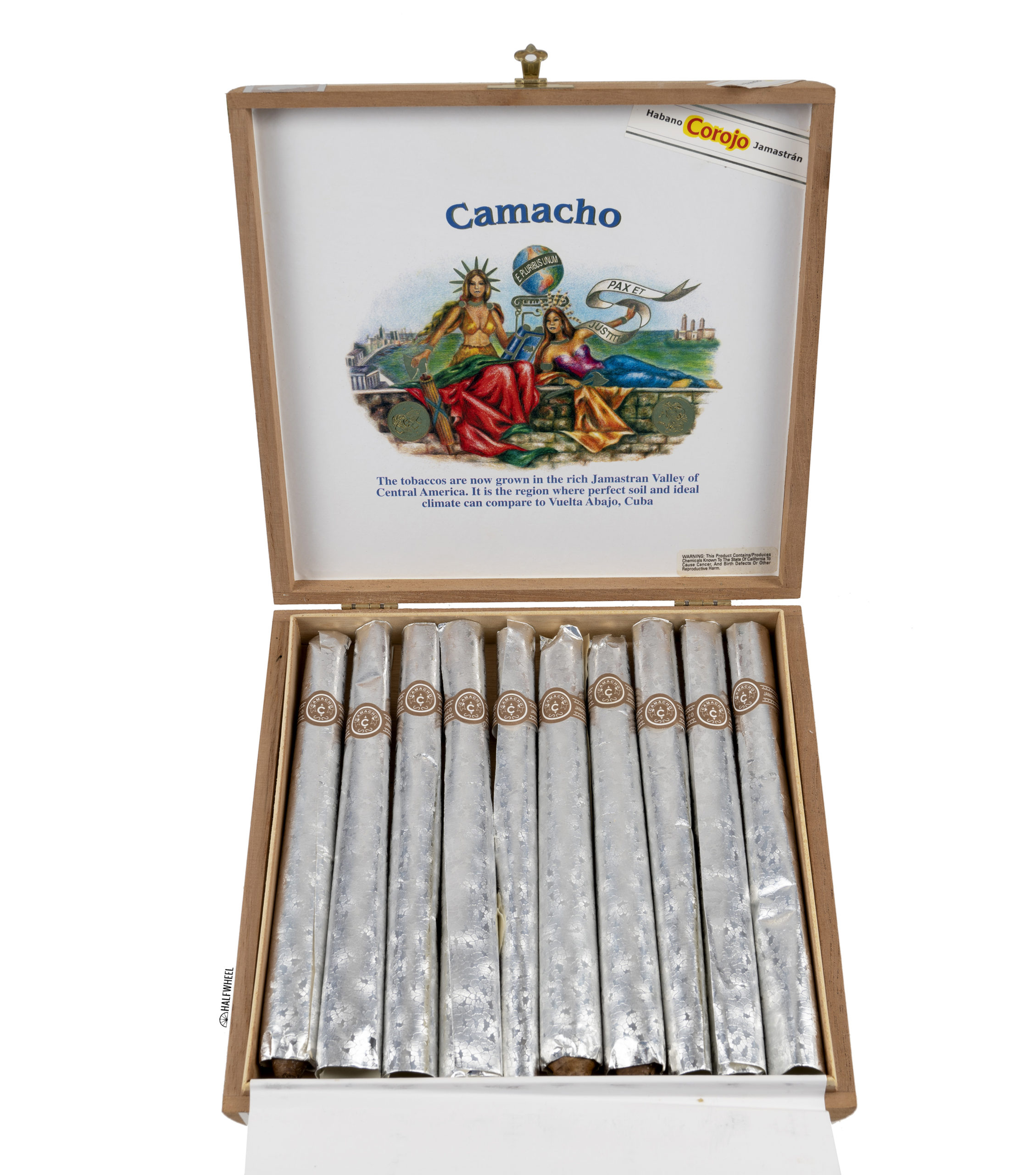 The cigars for this review are from one of the earliest batches, though it’s somewhat murky. A card included with the box indicates these were packed in March 2000 and released in June of that year, according to a card that were included in the box. Also noted on the card is that the tobacco used in the blend is 100 percent corojo that came from the 1997 crop year. But the box indicates a date of December 2001.

What is clear is it’s not the very first release because of a small detail with the band. The first year included a band that said “Havano” on the right side of the logo, while subsequent batches said “Jamastran” after Habanos S.A. complained about the use of the word in 2001. These cigars contain the later “Jamastran” band. It goes without saying that the Camacho of the early 2000s was is not the same Camacho as it is today. The brand was founded in 1961 by Simon Camacho, a Cuban exile who launched the company in Miami. His cigars were said to have found a number of fans and supporters, even the Britih Prime Minister, Winston Churchill, who had been introduced to them by a Cuban beer maker in 1962 while recovering from hip surgery. An unsmoked Camacho Lonsdale from Churchill was sold at auction in June 2010 for over $3,000.

In 1995, the company was acquired by the Eiroa family, who moved production from Nicaragua to Honduras and began to incorporate the Honduran corojo tobacco for which the family was well known. It was the Eiroa family who produced these cigars, as can be seen on the box, not long after a 28-year-old Christian Eiroa was named president of Caribe Imported Cigars, the parent company of Camacho, in 1998.

Then in 2008, the Eiroa family sold Camacho to its current owners, Davidoff Oettinger Group, which have kept the brand going strong, refreshing its image and portfolio in 2012 as one of the most thorough rebrands the industry has seen. The Camacho Corojo lives on today, a full-bodied, full strength Honduran puro that showcases the corojo varietal across a number of vitolas. 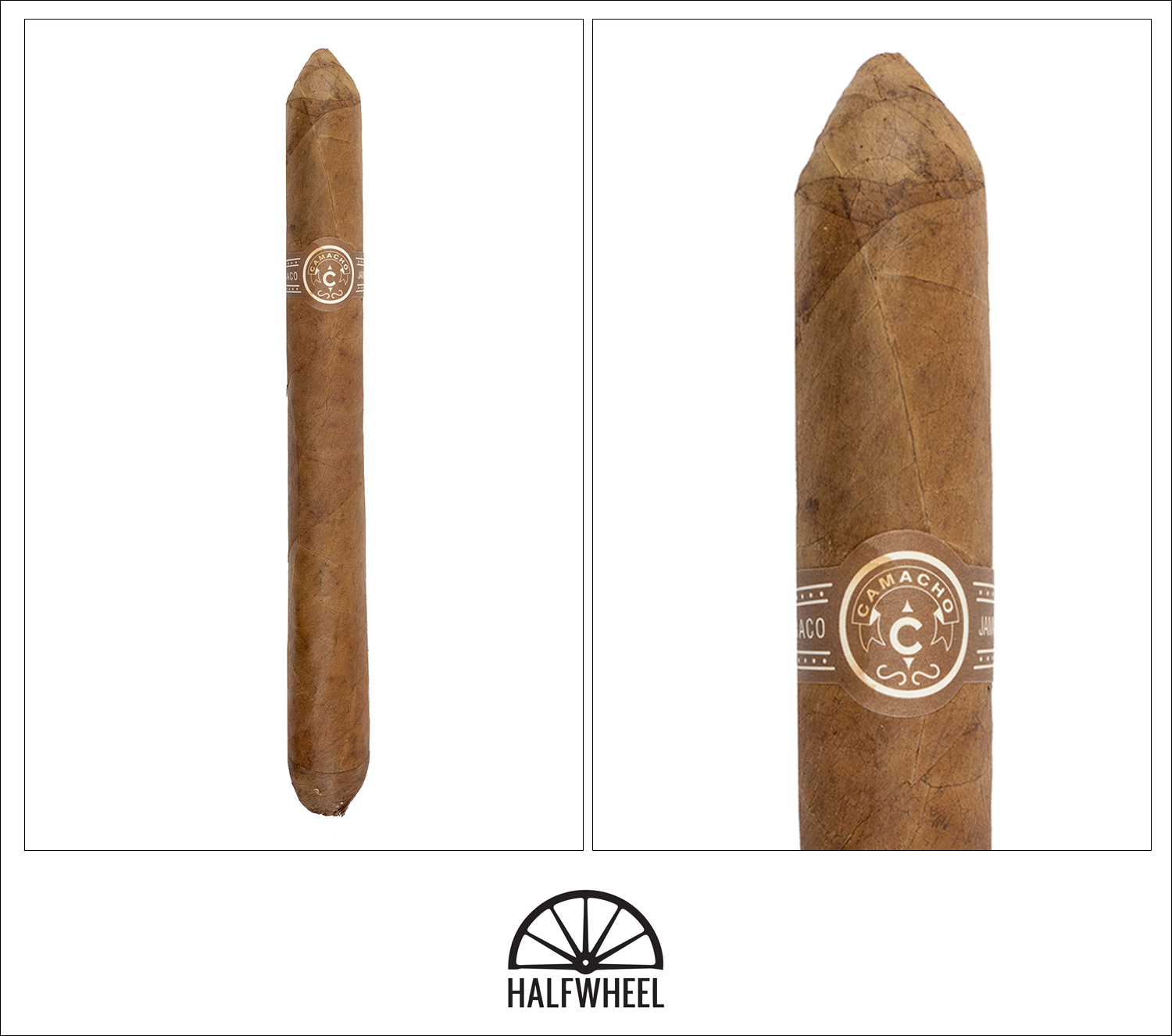 I knew I was reviewing an old Camacho for Holy Grail Week, but I had forgotten it was the massive Corojo Diademas. I’m not sure if the silver foil paper wrap adds to the visual size of the cigar, but it certainly adds to the ritual of preparing the cigar to be smoked. I’m relieved to see that the outer band slides off easily, and there’s no tape to slice open to unwrap the cigar. Once out of the paper, it seems fitting to take a moment to soak in the size of the cigar, as well as its figurado vitola that tapers from a small, belicoso-style head at about a 49 ring gauge to a 60 ring gauge bulb at the foot before the foot is rounded down to a much smaller opening. The wrapper leaf has a matte finish to it, still well-tanned into a hue of brown that is just somewhat on the lighter side of medium. There is just a bit of mottling in places, but other than the wrap used for the foot, it is a very evenly-colored cigar, with a decent network of small veins giving it some visual character. The cigar is rolled very firmly, almost to the point of being hard, and given the age I have no desire to squeeze it too aggressively. Both the wrapper and foot offer a light aroma that reminds me of a dusty field, though without that feeling of dust getting my nostrils. There are almonds and fence wood as well as the aroma unfolds a bit, with just a bit of pepper after a few more sniffs, and one foot offering a distinct aroma of toasted bread. The cold draw is a bit firm but seemingly a result of the vitola and the resulting volume of air more than any internal obstructions. Flavor is cool and creamy, developing into a subdued almond milk before picking up white pepper to brighten up the profile. From there, the cigar begins a tingling of the lips and tip of the tongue.

I didn’t notice it until I lit and began smoking the cigar, but the Camacho Corojo Diademas is a rather heavy cigar, even for its size. The distribution of tobacco certainly creates a bit of an imbalance when holding the cigar by itself in the mouth, but even beyond that, it still has some heft to it. The first puffs, save for the pepper, are subtle in intensity but complex in flavor. There’s some more of the creaminess, a bit of light earth, almond and a lighter pepper that continues to tingle the lips. Retrohales in the first inch are surprisingly mild, cool and just lightly creamy. It doesn’t feel in conflict with the flavor, but it’s just not at the same level and stands out for both for its relative lightness and mildness. The first inch produces a good amount of smoke, but more importantly, shows no issues with the draw. There is a fair amount of air being moved, but again, that seems to be the source of any notable difference from a smaller vitola. After the first clump of ash drops at just over an inch in length, I notice the retrohales brightening up by way of a bit of white pepper and baking spices, a step towards matching up with the flavor a bit better. One thing that is definitely apparent is that this is a well-aged and incredibly smooth cigar, and there are a few puffs where I feel incredibly bad for smoking this cigar yet also incredibly fortunate to be doing so, since the only way to get and enjoy what it is offering is to ultimately destroy it. Everything feels subdued yet still flavorful, and the effect of the age is almost unmistakable. It’s a smooth, mellow and creamy profile that carries the cigar into its second third. Flavor is medium-minus, body is medium, and strength is very mild thus far. Construction is very good, with plenty of smoke, an even burn line and very good combustion. The first noticeable change in the second third is a bit more of a wheat cereal flavor, a fitting addition given what ground the profile has covered thus far. It is also on the mellow side but has more of a lingering finish than I might have expected. The more it lingers, the more I realize that there is some more baking spice in the mix, some puffs delivering nutmeg and other offering cinnamon, both of which are very subtle and enjoyable. After a fairly extended mellowing of the flavors, the second half of the Camacho Corojo Diademas brings about a pronounced and fairly rapid reawakening. More of the baking spices lead the process, with pepper behind that and cedar following, though each very even in flavor intensity. From there, a bit of char enters the equation, and the flavor jumps from mild-plus to medium-plus and even a tick beyond very rapidly. It’s a consistent change between the two samples yet the rate is different, with the second sample showing a more evenly paced approach starting with the retrohale. Construction remains outstanding, with one sample showing just the slightest unevenness in its burn line, but otherwise, they burn beautifully. Flavor is closer to medium for most of this portion, body is medium-plus and strength is just shy of medium. For as good as the flavor has been, however, the end of the second third suggests that something is changing. The start of the final third sees the flavor continue to develop, and in the case of the first sample, sharpen quite significantly, whereas the second is a slower journey to essentially the same point. What had been a very smooth and mellow profile in the first half is now pointed. It’s not necessarily rough or harsh, though the physical sensation on the tongue might suggest such words, but rather it is pinpointing the taste buds with needle-like precision. There’s also now a bit of a metallic edge to everything, furthering that comparison to a needle. Out of that comes some dry earth, a combination that is striking both on its own but even more so when compared to the offering of the first half of the cigar, and striking for seemingly all the wrong reasons, leaving me to hope the cigar can salvage the final two inches. One sample gets a salvaging hit of peanuts, but unfortunately, the reclamation doesn’t happen and the final inches continue a fairly rapid and harsh tumble off the cliff, saved only by the fleeting flavor of Altoids mints which are at least familiar and not completely off-putting. Flavor is medium-plus, body is medium-plus, and strength is medium with a case for being a bit stronger. Construction thankfully stays very good, finishing without any problems in combustion, smoke production, burn line or draw. There is so much to process when smoking a cigar with this much age and story behind it that it's hard to provide a tidy summary, let alone strip away as much of the extracurriculars as possible. Doing that, the first third of the Camacho Corojo Diademas remains about as near perfect and sublime of a cigar as I have ever smoked. It is subtle, nuanced, and mellow yet flavorful, and quite simply exquisite. The second third does a good job continuing that path, and while not quite as stellar as the first third, would easily keep this cigar on a short list of best of the year if this was a current release. The final third, however, is beyond puzzling, rapidly progressing into a place of harshness, losing its balance and reminding me of a fine wine that has turned to vinegar. As with all reviews, I don't know what the score will be until it is published; what I do know is that it will fall short of describing what this cigar has to offer. Being able to smoke and largely enjoy these cigars, not to mention learn what they have to offer, is the real reward, not arriving at a number to apply to it.