It doesn’t seem all that long ago that Davidoff of Geneva USA announced a complete overhaul of its Camacho brand, from the blends to the bands to the boxes in which they are packaged.

While it seems fairly recent it has in fact been nearly three years since that announcement, and in that time the brand has added several new lines and sizes, including its most recent addition, the BXP.

Formally announced in Jan. 2017, the BXP is an offshoot extension of three of the company’s core lines, the Connecticut, Corojo, and Ecuador. Each blend received three new sizes as well as a slight tweak to the filler by way of the addition of Pennsylvania broadleaf tobaccos. “Reimagining these winning blends has been quite a journey and we are thrilled by the bold taste experiences our master builders have managed to deliver,” said Dylan Austin, vp of marketing for Davidoff of Geneva USA, in a press release. “Broadleaf tobacco delivers a great intensity to these blends and we feel very lucky to get our hands on some high quality primings to build into this venture.”

Camacho BXP began formally shipping in the U.S. on Feb. 13, with brand ambassador George Rami visiting stores for launch events for the cigars. The wrapper leaf isn’t the prettiest I’ve seen as its quite mottled and none of the shades of brown is shows are particularly rich. There are also visible some noticeable veins and spots where the wrapper seems to show signs of being tugged on during the box pressing process, while some bumps stand out on one sample in particular. Still, the overall look of the cigar is well above decent with visible seams, a good box press, a bit of oil and a rounded head that is capped well. There’s quite a bit of give in the first sample when I gently squeeze it both side-to-side and top-to-bottom, more than I would generally expect in a cigar of this shape. The second shows more variance: firm in some spots, softer in others; while the third is the best of the bunch with uniformity and just a bit of give. The foot initially offers a sweet aroma of rich cherry pie filling or banana bread before some pepper sneaks in and changes the offering quite a bit with touches of Champagne and light breads mixed in as well, though the third sample is heavier and brings in grilled cherry tomatoes; an odd aroma given what this cigar has otherwise shown. The cold draw of the first sample is loose but stops short of being wide open in the first sample, while the second and third are quite a bit firmer. Each sample offers flavors that elicit thoughts of wheat dough and bread in their chewiness, while the flavor is close but has a thicker underlying sweetness to it that flirts with molasses and caramel.

There is an engaging flavor right off the bat, as touches of sweetness, spiciness and dry, tangy earth get blended together with a bit of smoky oak to engage the front half of the tongue, while the first retrohale is peppery but at times a bit subdued. A thick white smoke pours out of the end of the Camacho Corojo BXT as in the mouth feels thick and chewy, while the body of the cigar settles in at medium-full, with the pepper beginning to liven up a bit. Just as the first clump of ash begins to crack at the one-inch mark, mixed nuts enter the flavor profile, bright and slightly salty. There is also more distinct pepper beginning to come through, something that shouldn’t be a shock given that this cigar markets itself not only on the box-pressed shape but on the addition of Pennsylvania ligero. Another increase in strength closes out the first third and pushes the cigar into its second. While moving fairly quickly through the first inch, the burn line has slowed in the second, and the Camacho Corojo BXP starts to take on a bit more of an earthy tone, picking up some peppery earth that is more about getting into the palate than lighting up the senses, though that can vary from sample to sample as the second showed no shyness in going after the nose with pepper, while the third turned just a bit rough on both the nose and tongue. It becomes a steady theme of the BXP past the midpoint, as each puff and retrohale has a good amount of slightly sweet yet fairly blunt pepper leading the way; at its best the thick sweetness coats the tongue while the pepper works mainly in the nostrils. A crisp lumber flavor comes along as well just past the midway point and picks the profile out of the more earth-laden spot it had been in, though one sample is more committed to the heavier base note than the other two. 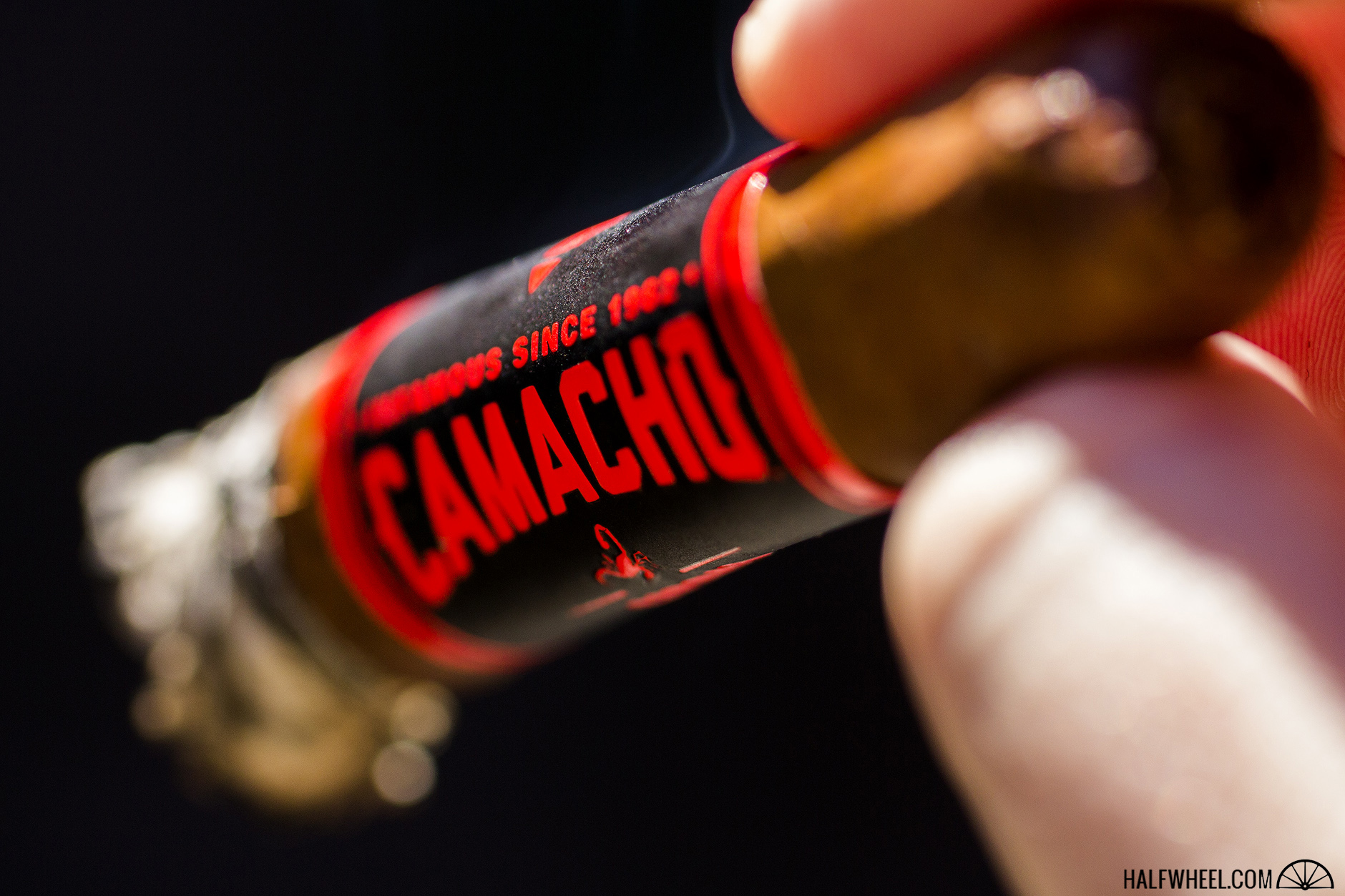 I start the Camacho Corojo BXP’s final third with a hearty retrohale and notice that the pepper has gotten much brighter and crisper in the nose than I remember it being earlier; it’s a white-pepper dominated smoke that seems to get into the individual olfactory nerves as opposed to the more blunt approach taken earlier. While two samples have lightened up a bit in terms of flavor, one stays heavy and imposing on the palate, with a bit of creep into the back of the throat adding some harshness that the cigar could certainly do without. There is still some sweetness but it has become tempered and could be easily overlooked if the pepper commands your attention, but there is some good duality between the two to be found. There’s also a touch more strength than before, though for my system it’s not overbearing whatsoever. In the final two inches, the draw gets noticeably loose and the cigar starts to heat up, turning the pepper sharp and bitter, though a slower and more controlled rate of puffing does a great job mitigating that and enables the BXP to be smoked down to a tidy little nub. I never thought of the Camacho Corojo line as being one that was in need of some extra pepper or strength, but I have to say the addition of the Pennsylvania ligero to the filler of this cigar did some very good things. It's still a medium-plus cigar with decent but not overpowering body and strength, though ardent fans of mild cigars will almost certainly find it packing too much horsepower for their palates. Each sample smoked beautifully, reaching high points when the sweetness from the ligero gets to balance the pepper, and hopefully the rougher spots will ease themselves with a bit of time. An easily recommendable extension to the Camacho Corojo line that's worth a try.