There are many cigars that are billed as “collaborations,” but most of them are just fancy ways of saying that company A will be manufacturing a cigar that company B will sell. It’s something that is relatively commonplace—and has been commonplace—as a client-factory relationship.

Last year, one of the exceptions to the “most collaborations are just factory-client relationships with marketing spin” debuted by way of General Cigar Co. and Espinosa Premium Cigars. Like most of those cigars, one company—in this case General—would be selling cigars that were made by the other one. But in this case, General would supply some of the tobacco used, specifically a Cameroon wrapper that Espinosa likely would have never had access to.

It’s called Warzone and the artwork depicts the Ten Years’ War, which took place from 1868-1878. While it was not known at the time, that war ended up being one of three conflicts that eventually led to Cuba’s independence from Spain. Blend-wise, it uses the Cameroon wrapper from General over a Honduran binder and fillers from Colombia and Nicaragua. It’s made at La Zona Cigar Factory in Estelí.

Warzone debuted in 2019 in two limited edition sizes. In 2020, the two companies announced that there would be 500 additional boxes of the Warzone Robusto produced along with a new Short Churchill, a box-pressed vitola that measures 6 1/2 x 48.

“Warzone was a success right out of the gate and we wanted to celebrate the brand’s one year anniversary by bringing out an additional size,” said Erik Espinosa via a press release. “Justin Andrews and I tested the blend in a bunch of different formats and we both agreed that the Churchill really allowed the Cameroon wrapper and the blend to come through. We’re looking forward to making Warzone available in time for the holidays.”

It debuted in early November ahead of the virtual version of Espinosa’s La Zona Palooza event, which took place Nov. 12-14. Typically, guests are invited to Espinosa’s headquarters in Miami for a multi-day event, but due to the coronavirus COVID-19 pandemic, this year’s event was held online.

General began shipping the cigars to retailers in mid-November. 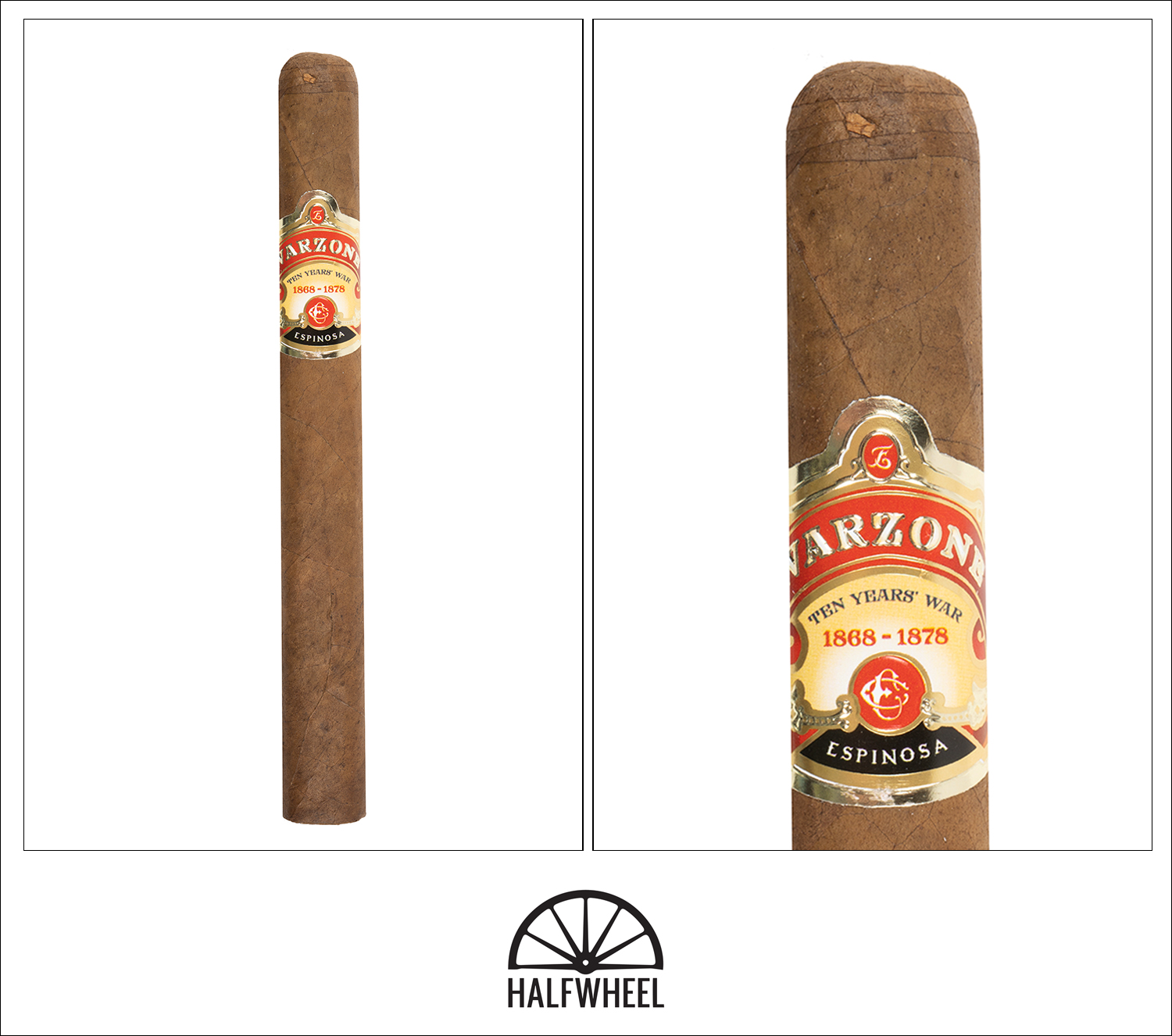 Cameroon is not the prettiest-looking wrapper. In fact, I often think the uglier the Cameroon wrapper, the better cigar will be. That being said, this is a pretty rendition of Cameroon. It’s maybe not as pretty as an Ashton Heritage Puro Sol, but it’s better-looking than most Cameroon wrappers. There’s a bit of discoloration and spotting towards the top of two cigars, but otherwise, it’s about all you could hope for in terms of “good-looking Cameroon wrapper.” The aroma from the wrapper is relatively sweet with a bit of cocoa, slight pepper, some roasted flavors and ketchup. It’s medium-plus and lacks any of the funk that I sometimes get from Cameroon. The foot is even sweeter thanks to an artificial sweetness and some vanilla. There’s also bit of granola and a touch of some sort of chemical sensation. It’s a bit stronger, though maybe not quite medium-full. The cold draw is similar to the foot with granola, nuttiness and a fruit flavor that reminds me of a blueberry smoothie. Flavor is medium-full and each cigar has a slightly open cold draw.

The Warzone Short Churchill starts with roasted flavors, cedar, peanuts and some saltiness. The peanut flavor gets stronger and the cedar flavor sticks around, though the other flavors have disappeared. A creaminess adds itself to the mixture, which creates a nice trio of flavors. At times there’s earthiness or a dry chocolate, but for the most part, it’s just that trio of very clean flavors. It finishes with peanuts, meatiness and a touch of black pepper. The finish is a touch drier than the mouth flavor, something that is probably due to the lack of vibrant creaminess. Retrohales are sweeter. There’s some of that blueberry smoothy like flavor—it reminds me of Naked Juice’s blueberry flavor—along with a weird sourness I can’t place. The finish of the retrohale is more conventional with peanuts over mustard, cedar, tartness and a touch of white pepper. Flavor is full, body is medium-plus and strength is medium-plus. Construction is great on all three cigars. I spend quite a bit of time trying to figure out where pepper is coming from in the second third. It’s not that the pepper is hard to find; in fact, it’s all over the mouth. But I just can’t figure out where it’s coming from. It’s not the initial flavor as that is mainly butter, cedar and peanuts. There’s some white pepper, but there’s not that much white pepper. It seems to be the finish. While there are peanuts and creaminess upfront, there’s black pepper and fruitiness as the finish lingers. And unlike the fruitiness, the black pepper just never seems to go away. Retrohales have peanuts, cedar, lemon and white pepper. If anything, that white pepper is just a prelude to a more forceful black pepper that shows up in the finish alongside some peanuts. While it’s noticeably rougher than the first third, the Warzone is also more vibrant. It’s truly like someone went to the volume knob and just turned it up from five to nine. Flavor is full, body is full and strength is nearing medium-full. Construction is fine, though the smoke production is a bit inconsistent. The final third of the Warzone Short Churchill is both stronger and spicier than before. A mixture of cedar and creaminess is now the leading candidate, which might not make a ton of sense given the previous sentence. Once again, black pepper is just lingering all over the mouth. Peanuts are a background flavor, but they stick around until the end. It finishes with black pepper, some of the wasabi-like pepper that Cameroon oftentimes has, cedar and creaminess. Retrohales have even more of the wasabi pepper over top of cedar and macadamia nuts. The finish of the retrohale has cedar and lots of pepper. Flavor is full, body is full and strength is almost full. I need to make a touch up to keep the cigar burning until the end, but otherwise construction remains pretty good. Outside of Casa Fuente, the Warzone Short Churchill might be the best "strong, classic Cameroon" cigar I've smoked. There are other companies that have begun to make stronger Cameroon-wrapped cigars—RoMa Craft Tobac's Baka and Black Works Killer Bee The Swarm come to mind—but those cigars don't taste very Cameroon-like. I suspect—perhaps due to the lack of cigars like this and the general trend of cigar blends getting stronger—we will begin to see more cigars that have a classic Cameroon wrapper flavor and are medium-full or stronger in terms of nicotine, but for now, this might as well be as good as it gets unless you live in Las Vegas. The Warzone Short Churchill has the rich Cameroon flavors that I've found in blends like Don Carlos and La Aurora Preferidos, while also delivering the new age punch that I've had in countless cigars from Nicaragua. Unfortunately, if it's below 50 degrees outside, I would recommend waiting to light one up until you can find a warmer climate.