The last time I reviewed a bee-themed cigar from Black Works Studio (BLK WKS), I started the review wondering what the point of Black Label Trading Co.’s sister brand was.

To be quite honest, I’m not really sure I’ve figured out the answer—other than the one I pointed out at the time: it’s a place for some of the more creative cigar concepts from the Oveja Negra family of brands. That review was of the Killer Bee Connecticut, a 4 1/4 x 46 petite corona that was notable for two reasons: the striped wrapper that was used on the top and bottom of the cigar, and the fact that it was very good. It finished #11 on our Top 25 that year, which I believe is still the highest finish of any cigar from the factory. That cigar remains my favorite cigar from either Black Label or Black Works Studio.

Earlier this year the Killer Beer returned, but with new digs. This time the cigar is called Killer Bee The Swarm. It’s a 5 x 46 corona that uses a Cameroon wrapper over a Nicaraguan habano binder and Nicaraguan fillers. Like the Killer Bee Connecticut, the cap and foot are accented, though this time it comes from two different types of tobacco: Ecuadorian maduro and Honduran candela.

“To say I’m excited about this release is an understatement. Cameroon is one of my favorite tobaccos and I’ve worked a long time to develop a cigar that highlights the distinct profiles it possesses,” said James Brown, founder of Black Works Studio, in a press release. “The Swarm is bold, spicy and extremely complex. It’s very unique, but also true to the style of the Killer Bee line.” 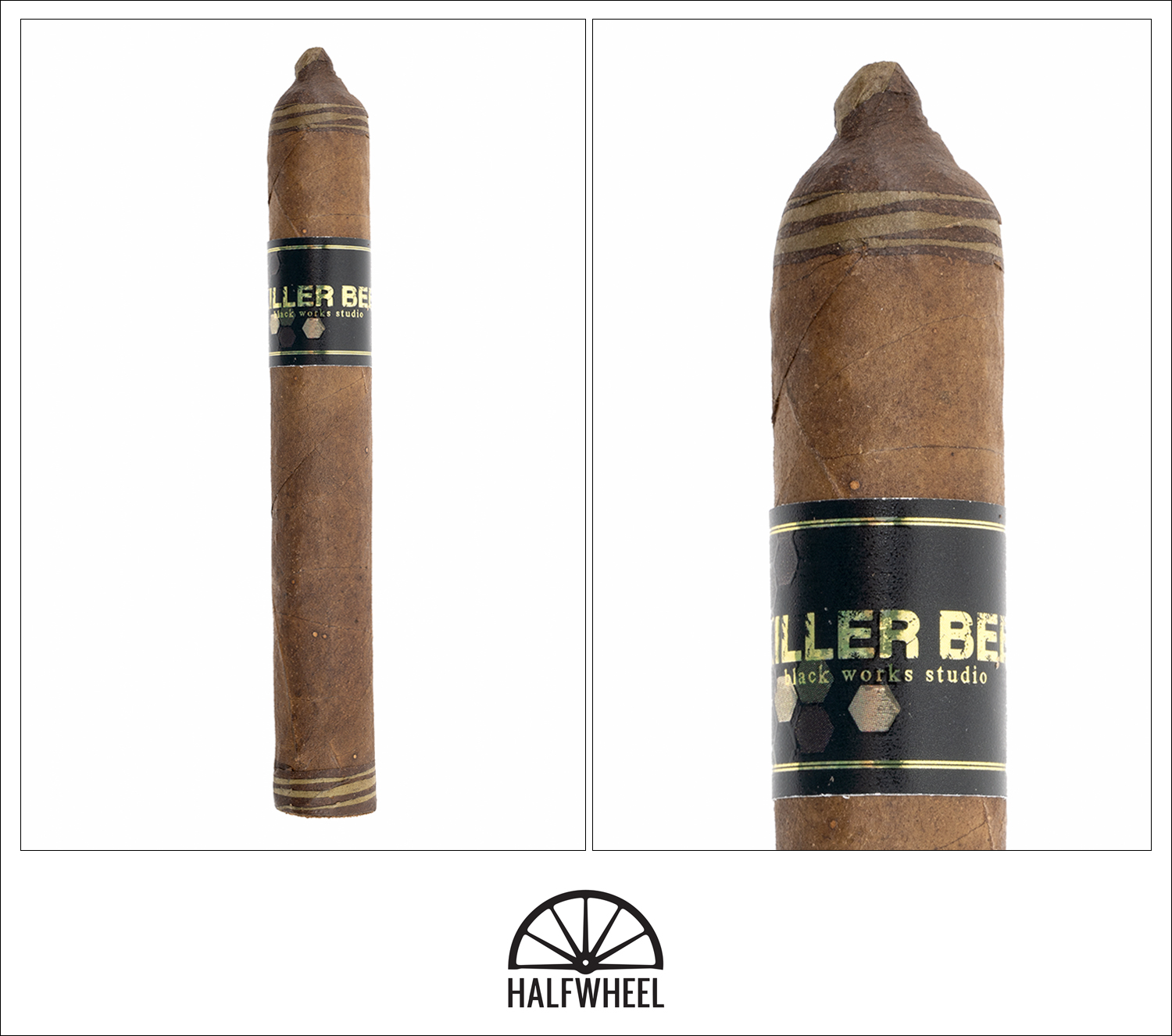 This is a very interesting looking cigar with at least three different colors of wrapper. There’s the main Cameroon leaf that extends the bulk of the cigar, and then both the cap and foot have candela and darker stripes. As if that wasn’t enough, while the cap looks like it’s just an elongated pigtail, it actually has much more structure than a normal pigtail. Completely overshadowed by all of that is the band, which pulls off the bee theme quite well, albeit in a subtle manner. There’s some spotting on the main wrapper on two of the cigars, though I’m not sure if anyone would really notice that given the sensory overload of the three wrappers. The aroma from the wrapper is mostly leather with some earth and touches of pepper, right around medium-plus. The foot is substantially fuller with lots of peanuts, some leather and saltiness. While it’s quite pungent, the smell itself is super compact. Even after 45 seconds, there’s still some sensations in my nostrils though it’s hard for my brain to figure out what exactly is going on. The cold draw has a similar compact leather flavor but at times it gets oversewed by either sweet raisins or ammonia. Another sample has more of a red wine flavor, though a more pedestrian grape flavor is also there at times.

While the cold draw might have been compact, the first puff of the Killer Bee Swarm is more like a bouquet of bright flavors. There’s sweet leather, earthiness, peanuts, black pepper and sawdust. Without question, the peanut flavor is the star of the show with a ton of vibrance. As the first third develops the peanut flavor remains, though it’s joined by a water chestnut flavor that actually takes away from some of the detail. Behind that there’s butterscotch and a mild amount of black pepper. Retrohaling leads to more peanuts, rocky flavors and a bit of sweetness. The finish has raspberry, lots of nuts, grains and a similar amount of pepper. While the raspberry flavor is nice, it’s actually a bit rougher than the profile in the mouth. Flavor and body are both full, strength is medium-plus. Construction is flawless during the first third of each sample.

The mineral component from the first third picks up quite a bit in the second third of the Killer Bee Swarm, and it’s joined by green pepper and a bit of raisin. At times it seems like it’s going to take over from the peanut flavor, but then a few puffs later the peanut sensation comes roaring back. The finish is much sharper with black pepper now leading peanuts and leather. Retrohales remind me a bit of Corn Flakes with some pistachio liqueur behind it. Flavor and body remain full, strength picks up to medium-full. Construction remains excellent. While the second third of the BLK WKS Killer Bee Swarm got much sharper and a bit less sweet, the final third is actually sweeter than the first third. Some of that is due to the receding of the mineral flavor, some of that is an added sweet red wine flavor, but a lot of that seems to just be an added sweetness to the nuttiness. All of this is taking place both while the smoke is in my mouth and for 15-20 seconds after the smoke has left the mouth. While it’s sweeter, the profile is still quite sharp. About a minute after the smoke has left my mouth it tastes as if I’ve just ate two slices of toast. Retrohales are something completely different. There’s lemon, hoisin sauce, straw, creaminess and leather. With about an inch-and-a-half left there’s an added mayonnaise dimension to the creaminess, which really helps bring the cigar home. The finish of the retrohale retains a lot more of the specific nuttiness I experienced in the first inch, now sitting on top of creaminess and lemon. Flavor and body both remain full, strength finishes medium-full. I’m not sure what it is with the bee-themed, smaller cigars from Black Works Studio, but this is another winner. The Swarm is a refined, full body cigar that is just a tad bit mellower than you might expect. While I’m not sure it would have mattered from a scoring perspective, I definitely appreciated that the cigar was rather quick as it meant the rougher parts of the second third weren’t overwhelming. Instead, they serve as a contrast between the nutty first third and the very complex final third. Sometimes you can tell my enjoyment of a cigar based on that final third shot and in this case it’s exactly what it looked like: a cigar I wanted to keep smoking.