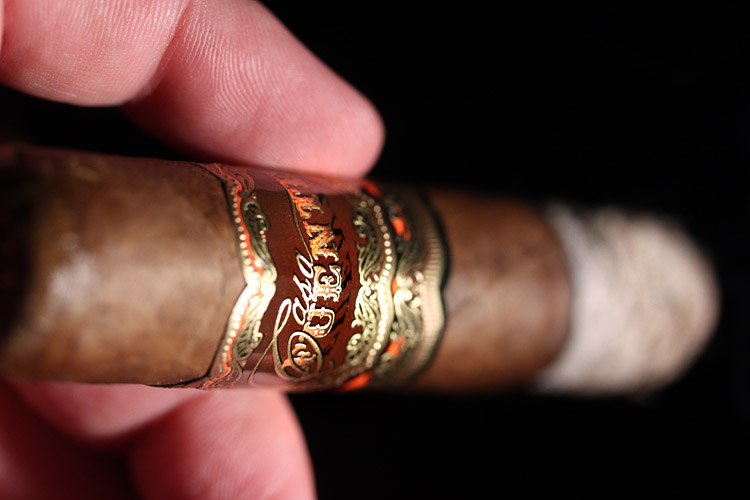 This will be sixth cigar we’ve reviewed that is exclusive to the legendary Casa Fuente, yet it’s only the third Casa Fuente release. Despite being the first cigar ever reviewed on SmokingStogie and being reviewed on TheCigarFeed, we seem to be missing a definitive history on the Casa Fuente line.

Casa Fuente is a cigar line that is made for the namesake Casa Fuente retail store, which is located in the Forum Shops at Caesar’s Palace in Las Vegas, NV. The shop itself, which you can see in all its glory here, opened in the summer of 2005 and is a partnership between Michael and Robert Frey of FreBoy Tobacco/CigarBox and Robert Levin of Holt’s/Ashton. It is the only cigar bar officially licensed by the Fuentes who are also closely associated with the aforementioned Holt’s and Tampa Sweetheart’s.

In addition to the famous mojitos, apparel and accessories, Casa Fuente features a collection of unique cigars that can be divided up into two groups.

The first is just rare and hard-to-find Fuentes, most branded under the Forbidden X line, they include:

Nearly all of these cigars are available in identical form (blend/size) in different packaging in other forms, largely in the Opus 22 gift sets from Prometheus. However, the only place the black-banded versions are sold is Casa Fuente.

The other set of exclusive cigars is the aforementioned Casa Fuente line. Introduced at the 2005 opening, Casa Fuente now features eight sizes:

*The Casa Fuente Lancero is not officially offered in any quantity other than singles.
Bundles are purchasable, but there is no set price and it is known to require either knowing the right people or being friendly to the staff.
The Lancero also suffers from being routinely out of stock.

Today’s review is of the Double Robusto which was introduced in late 2006 after the Double Corona and Pyramid #2 had been added, but before the Lancero, which as introduced privately in 2007. The Casa Fuente Double Robusto is the only one of the line to come wrapped and cedar (and to say Casa Fuente on the cellophane) and the most expensive option when buying a box because as opposed to the other sizes, it is offered only in boxes of 42 as opposed to 25. 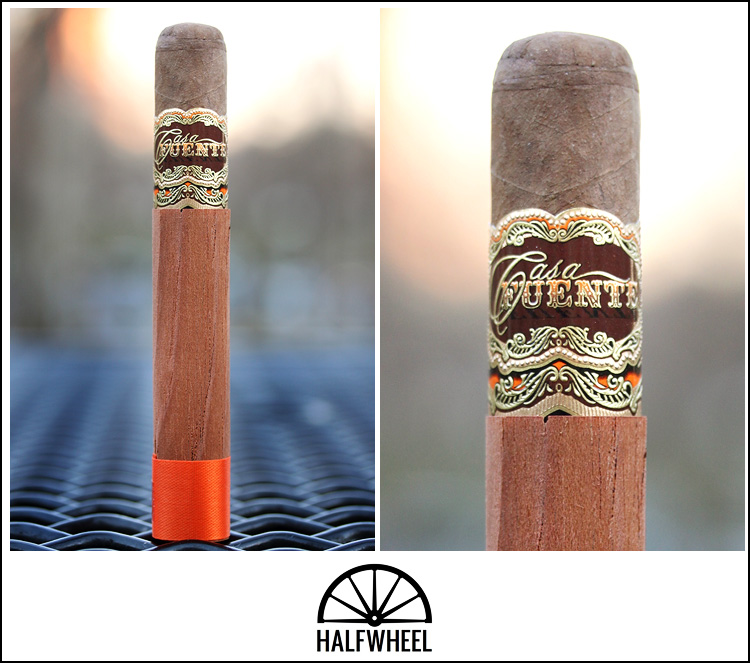 Great Cameroon is, well, great. It’s a deep dark earth color that has an immense density. Well it doesn’t appear to be the tightest of rolls, the Casa Fuente Double Robusto has little give and weighs quite a bit. From the African wrapper it’s a full aroma with an underlying sweetness underneath sour leather, barnyard, sweet cedar, a touch of raisin and some earth. I’ve smoked enough Casa Fuentes to know that the wrappers all provide a bit of a different smell, even though the overall Casa Fuente signature is quite distinct, and that’s due to the fact that these are very full and very complex. Aroma from the foot is rather salty with a strong sweet bbq note and a lot sunflower seed. Cold draw of the Casa Fuente is rather open and has a familiar sweetness. On this particular cigar, it’s much more like the foot aroma than anything else with the sunflower seed note really making itself known. Aroma from the Casa Fuente Double Robusto while lighting is a clash of Fuente and Cameroon with some of the sweeter and barnyard notes mixing with the classic pepper and cedar of Tabacalera A. Fuente y Cia.

The first third starts with an awesome milk chocolate and a wasabi-like pepper through the nose before transition to sweet nuts. There’s not much smoke, but it becomes a mixture of sweet cedar and cocoa with black pepper on the back — the Double Robusto more so than any other size really seems to capture the idea of the Opus X (filler) and a Cameroon wrapper going head to head. Before you know it (around six puffs in), the Double Robusto is putting out tons of rich, thick and heavy smoke with a great sweet cedar and barnyard aroma. The first two inches are rather distinct with tons of black and red pepper on the back of the throat. There’s honestly not too much up front, some of the peppers, cedar and a bit of aged tobacco with an underlying cocoa. Out of the gate the Double Robusto is always the strongest of Casa Fuentes for me, not just strength, but also body — both of which are full. 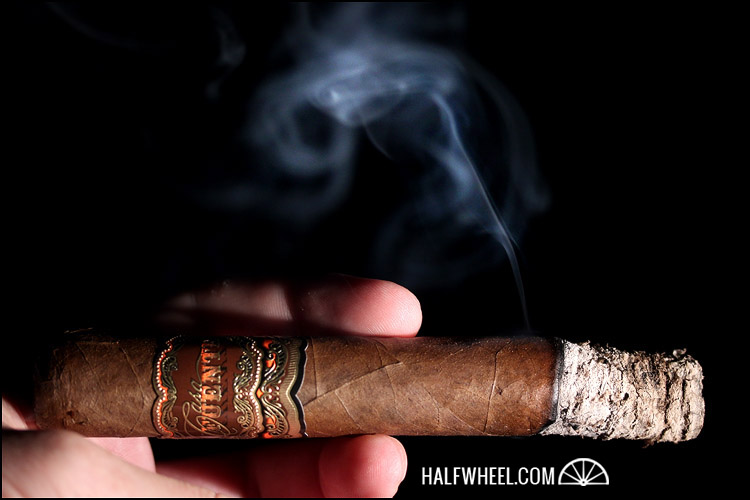 You know what the second third comes. It’s not that the floor drops right underneath you, because it doesn’t; the Double Robusto actually feels more put together than in the first third. However, the pepper dominance ends and a more rounded sweeter profile takes it place with cocoa, nuts, earth, barnyard and a bit of floral notes. Even the retrohale of the Casa Fuente, which started as a mixture of Cameroon’s wasabi and black pepper, changes to a much sweeter profile. Close to the halfway point, there’s a real sweet earth that seems to appear time and time again. 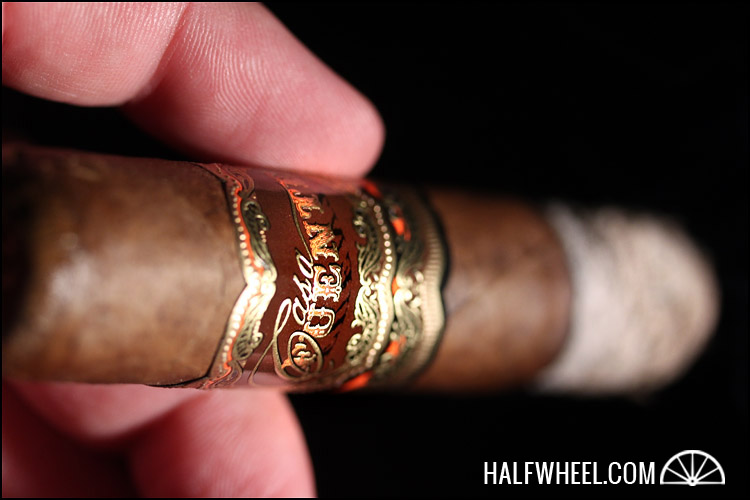 There are a few changes at the beginning of the final third, but with an inch and a half left it’s classic Cameroon flavors from the Casa Fuente Double Robusto. The sweet barnyard, cocoa, nuttiness and grassy notes are the dominant forces up front with the ever present Fuente black pepper on the back of the throat. Flavor is medium-full, which is a slight decrease from before. As the end of the Fuente nears, the cigar’s profile begins to slowly meld together and begin to decline. 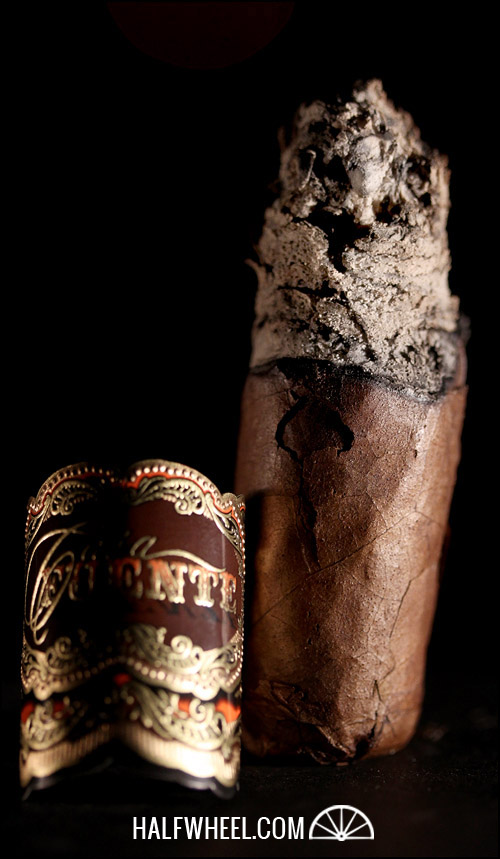 Is this my favorite Casa Fuente? No, absolutely not. Is this a good cigar? Yes, absolutely. Unlike its OpusX and Añejo counterparts, I have found Casa Fuentes to deliver time and time again, each a little different, but all entirely enjoyable. In many ways, it's more like Don Carlos in the sense that Casa Fuente cigars are smokeable at anytime, perhaps it's the Cameroon. The ultimate question is are these worth the high dollar and while I would definitely spend the money on the Casa Fuente Double Robusto over most of Fuente's $20ish cigars, I'd take a Casa Fuente Lancero every time. And that's just the way it is.