The celebration of holidays has been the inspiration for a Viaje cigar more than once, as cigars have been released for St. Patrick’s Day, 4th of July, Halloween, Thanksgiving, Christmas and the winter holidays. While not a holiday, it’s Andre Farkas’ June 6th birthday that serves as the muse for one of the company’s newest releases.

Formally unveiled at the 2016 IPCPR Convention & Trade Show, the Viaje Birthday Blend made its debut as part of the company’s White Label Project, a sort of catch-all header for projects that weren’t ready to be complete standalone lines. In 2011 when White Label Project was announced, Farkas called it “the vehicle by which we will release experimental blends, shapes, mash ups, factory errors, etc. Its a peek behind the factory curtain.” 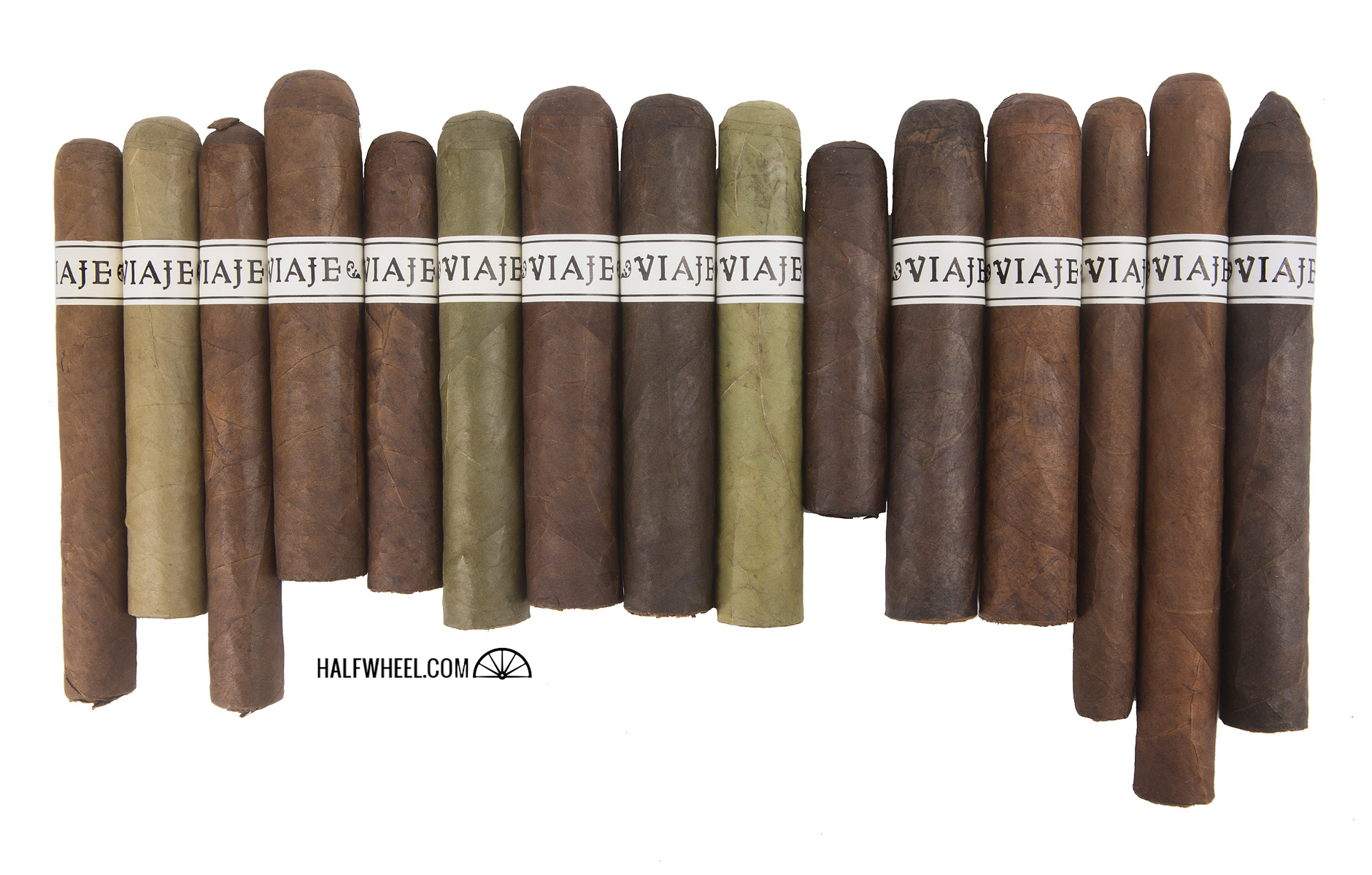 However, by the company’s own admission, Birthday Blend wasn’t intended to fall under the White Label Project, which has been the banner for a number of releases including the eponymously named White Label Project cigar, as well as the Fifty Fifty Red, PL TB#7, St. Patrick’s, Stuffed Turkey (both White Meat and Dark Meat), Super Shot 12 Gauge and Winter Classic.

The Birthday Blend was supposed to get its own packaging, but due to FDA’s Aug. 8 deadline to get new products commercially available, the decision was made to release under WLP, which meant using a generic white band, plain boxes and the familiar white sticker on the front that indicates the size, wrapper, production number, production date and production numbers via handwritten details.

During the IPCPR Convention & Trade Show, Farkas said that Birthday Blend will come with its own packaging in future years. The company believes it will be able to eventually move Birthday Blend out of the White Label Project and into its own release status, though that decision hasn’t been confirmed as of yet as FDA regulations continue to get ironed out and certain areas of vagueness clarified or possibly changed.

Specifically, Viaje may run into problems when the number of cigars in each box increases. In August, Judge Amit Mehta of the D.C. District Court ruled that a product shouldn’t be considered new if the only thing that changed was the packaging, such as the font, logo or color. The agency had previously stated that it considered any major packaging changes—colors and logos, for instance—to constitute a new product, while minor changes–slight changes to a font or logo size—wouldn’t deem something as a new product.

However, Mehta ruled for FDA that a quantity change—i.e. the amount of cigars or cigarettes in a package—would qualify as a new product, something that would seem to create a roadblock for the Viaje Birthday Blend to develop and evolve as planned.

As for the cigar, it’s a blend inspired by Old Forrester’s Birthday Bourbon, a limited edition, 12-year-old, vintage dated expression that comes out on Sept. 2, the birthday of company founder George Garvin Brown. Farkas selected a Nicaraguan binder and filler and wrapped them in a Mexican San Andrés maduro leaf. The most distinguishing part of the release is the part that ties into Farkas’ birthday, in that the number of cigars in each box will correspond to his age that year. Farkas is 38 this year, hence 38 cigars per box in the debut version. “Hopefully one year we’ll have a box with 150 in them; which would be nice,” Farkas said, though he has also gone on record as saying that it will stop at 40.

The Birthday Blend is being made at Tabacos Valle de Jalapa S.A. (TABSA) with 300 boxes produced. If there’s one thing I don’t associate Viaje with, it’s figurado vitolas; it’s not to say they haven’t made a number of them, but ask me to picture a Viaje in my mind and it’s going to be a parejo. That said, this belicoso is a good looking specimen, the head seems to be on the compact side but retains the core markings of the vitola. I can’t say I would have pegged the wrapper as being a Mexican San Andrés leaf; maduro absolutely, however. There’s an oily shine to the dark brown leaf, which almost glistens in the proper light and has a bit of very fine texture on the fingers, with small veins and no appreciable tooth. The first two samples are rock hard and offer no give; I honestly can’t remember the last time I felt a cigar this firm. If you like the smell of soil, the foot of the Viaje Birthday Blend will be right up your alley, as damp, rich earth fills the nose, punctuated by a bit of pepper and in one sample, a bit of jerk spices that seems to be where very faint touches of sweetness also lie. The cold draw offers a bit of chocolate sweetness and some spices as the air moves decently but a bit on the restricted side.

I have yet to smoke a mild Viaje and the Birthday Blend keeps that streak intact, something that shouldn’t be a surprise given the blend notes. While the palate it able to comfortable handle the pepper that stands out on the earthy, chocolatey flavor core, the nose doesn’t feel adequately prepared for the quick, sharp pepper that is found in the retrohale. However, it’s that same earthy sweetness that helps to both fill out the texture and soften the sting, while adding some welcomed complexity. One of the things that varies the most in the early goings is the air flow; the first cigar felt about as restricted as you can get without calling it plugged, while the second sample was much better calibrated and the third was on par if not even a touch worse than the first. Be forewarned that if the draw feels tight, you are in for a long cigar. When the cigar is drawing properly, it allows the senses to fully engage with what has become a quite complex and pleasing aroma, a mix of rich earth, some campfire, thick and warm chocolate, and just a touch of pepper that functions well in its now complementary role. Through the first inch of the first sample I’m already feeling a bit fatigued by the tight draw, which also inhibits me from getting as much smoke from the cigar as I would like. There seem to be spots where the draw gets a little bit easier as I rotate it, but even at its best it still requires more than the average effort. While the first third of the Viaje Birthday Blend was peppery, it was still fairly smooth, something that I can’t say that the second third continues that trend. The flavor picks up a bit of sharpness after the second small clump of ash breaks off, with retrohales showing the change in an even more pronounced manner, almost completely overshadowing what the palate gets when used in tandem. The harshness fades by the midpoint, but I can’t say it has been replaced by an abundance of flavors, and what is there is hampered by an incredibly tight draw. One thing that has changed is a noticeable drop in sweetness that was found in the first third, and as a byproduct, the dryness of the smoke has increased, passing that along onto the salivary glands as the burn line slowly and dutifully makes its way up the cigar. There is still some appreciable pepper through the nose as the final third of the Viaje Birthday Blend gets underway; despite a firm draw the cigar burns fairly well, though as I approach the three-hour mark I’m having trouble rectifying the time-to-flavor ratio. The chocolate sweetness has turned more towards cocoa powder, still enjoyable but lacking the luxury that the warm fudge afforded earlier, while the overall flavor is getting to be too dry for my liking. The final two inches get marred by a real harshness that settles in on the very back of the tongue and the top of the throat, though the Birthday Blend seems to want to show its better side through the aroma, which has touches of thick, hot fudge and barnyard. I may have said this at some point in a previous review, but if I did, it is certainly a rarity, especially for a good cigar: the number one thing I wished for from the Viaje Birthday Blend cigar was less of it, or at least that it took less time to get through it. The Viaje Birthday Blend is quite good in numerous spots; the first third can be downright divine with its complexity and balance between sweetness, earth and pepper, and while I’m not a fan of the dryness of the subsequent thirds, it doesn’t condemn this cigar to a negative score, but it certainly detracts from what the number could have been. But rarely if ever have I smoked a cigar that has burned this slowly, from what I can tell is an overfilling of the cigar by the roller and probably some very delicious, oily leaves that are full of flavor but not the most combustion friendly. Maybe the cigar will get quicker with time, maybe the slowness is part and parcel of the experience; either way, if you've got the time, this is a cigar worth trying.