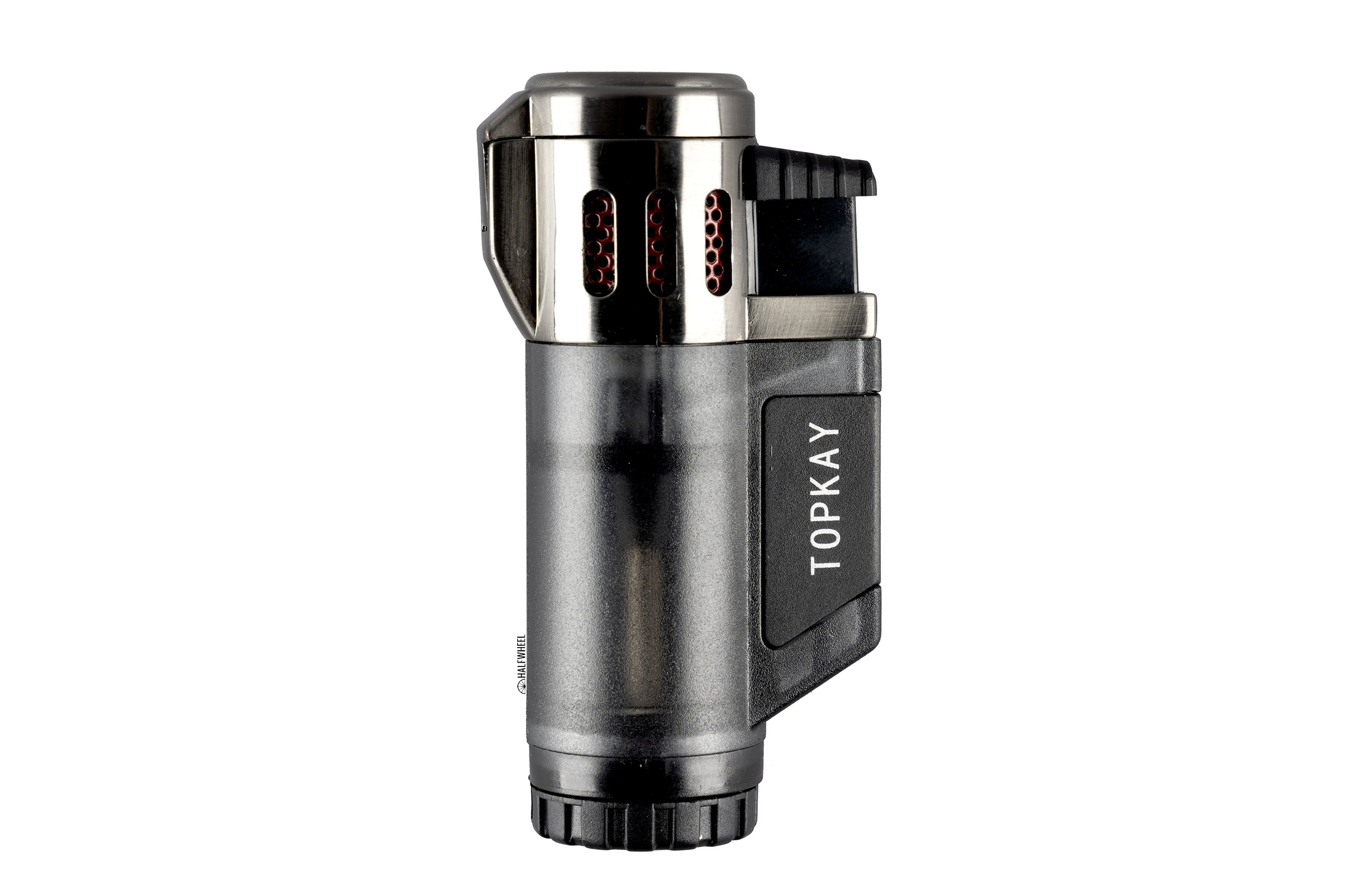 Most of the lighters that get reviewed on halfwheel come from the companies and brands you are likely to find in your local brick and mortar retailer. But as we all know, not everyone shops at such stores; many people choose to shop online. And many of those people likely shop at one of the biggest retailers in the world: Amazon.

As such, when it came time to find a lighter to review, I borrowed a page from Charlie Minato’s reviews of several humidors in the $175 and 75-count range and picked what was designated as Amazon’s Choice, which is likely what a good number of cigar smokers might select if they were looking for a lighter on Amazon. That recommendation, as of late March 2021, was this lighter, the Topkay Triple Jet Torch. It’s a no frills lighter that debuted on Amazon on Sept. 1, 2019, and as of this writing ranked #32 in the store’s lighter category, which includes everything from bulk packs of BICs and fireplace lighters to lighters gated towards cigars and beyond. It’s also picked up—as of this writing—1,587 ratings along the way, earning 4.5 out of 5 stars.

Editor’s Note: The Topkay is no longer “Amazon’s Choice” for a cigar lighter as of May 20. It now recommends a tabletop lighter. — CM.

Having reviewed a number of lighters, the design is immediately familiar: a translucent plastic body with a flip-up lid and push-down ignition, and no real features beyond that. It’s a design used by seemingly every lighter manufacturer in some form or another, each modifying it a bit to provide a somewhat distinctive design to a common form. The Topkay Triple Jet Torch is an economy-priced triple flame torch lighter that is thin on features and geared towards those looking for a low-key and fairly high-powered method by which to light their cigars. It’s pocket-friendly, measuring 2.92 x 1.48 x 0.92 inches and weighing just 2.1 ounces, easily one of the lightest lighters I have used.

The alleged MSRP is $24.99 for a pack of two lighters, though Amazon seems to regularly sell them for $14.99 with an online coupon, which works out to $7.50 per lighter.

Without a doubt, it’s the price and whatever convenience you find from being able to order it from Amazon. At $7.50, it is easily one of the cheapest triple flame lighters you will find on the market and it offers a pretty good bang for the buck. There is no shortage of options in affordable triple flame torch lighters, but here are some of the most similar to the Topkay Triple Jet Torch that you are likely to come across: One of the few things that the Topkay Triple Jet Torch should do well is ignite without frustration, and it simply doesn’t do that. If this ignited with a single click with any semblance of regularity, it would get an easy recommendation, but it doesn’t. If you’re willing to put up with that and want to save—literally—a couple of bucks, go ahead and pick up a set because it works well otherwise, and seems to be on par with its competition based on the several weeks of use that I have given it. If anything, the lighter is fairly impressive once it is lit, as the flame is even and steady, something I haven’t always seen in the value segment. But when looking at the list of other options, there are just too many that could be had for a few dollars more that I think deliver a bit better performance.