Over the last handful of years, the Tobacconists’ Association of America (TAA) has become a more common name to many cigar consumers after long being a retail group known almost only to those employed in the cigar industry,

The TAA is a group of about 80 retailers from all across the U.S. who come together once per year—usually in the Dominican Republic or Mexico—to meet about issues facing the cigar industry, socialize and participate in a trade show with select manufacturers. In recent years, many of those manufacturers have begun to not only participate in the trade show, but also make exclusive cigars for the members of the organization.

Some opt to give the organization’s members exclusive sizes of existing lines or give members access to a new line for as long as a year before it is sold to all retailers, while others have created exclusive series just for the organization. Crowned Heads falls into the latter.

Named The Angel’s Anvil, the series is in its third year. Unlike the Tatuaje TAA series, it’s not a series that centers around one blend; rather, the branding and story remain similar year to year, while the blend changes.

The name comes from a story that is made to parallel Crowned Heads co-owner Jon Huber’s own journey in the cigar industry, specifically his time spent at CAO prior to the STG merger. The promotional material explains the story: 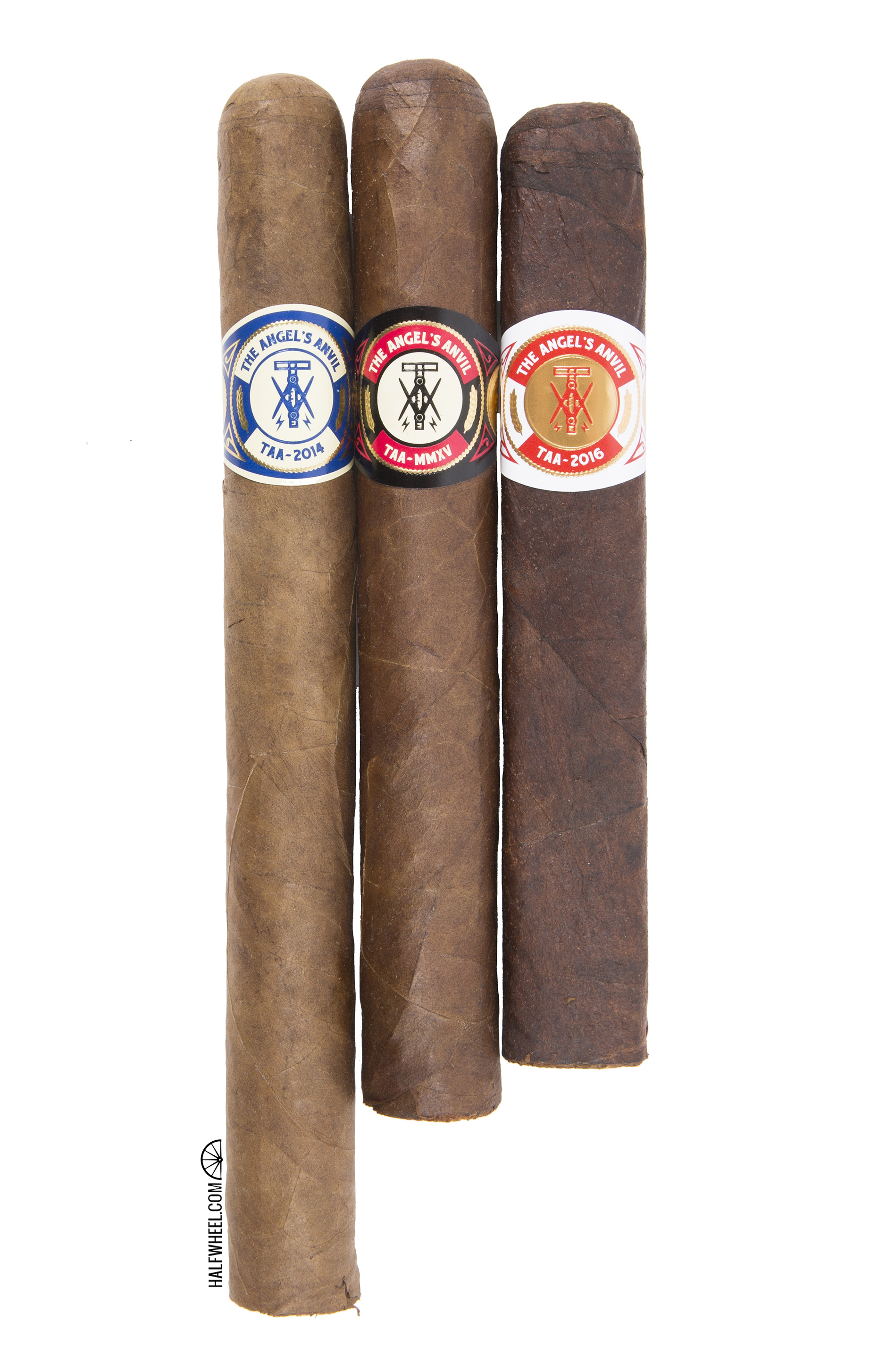 The first two years of The Angel’s Anvil have seen cigars with an Ecuadorian wrapper over Dominican fillers. This year, the cigar sports a darker Connecticut broadleaf wrapper over a Nicaraguan binder and fillers. 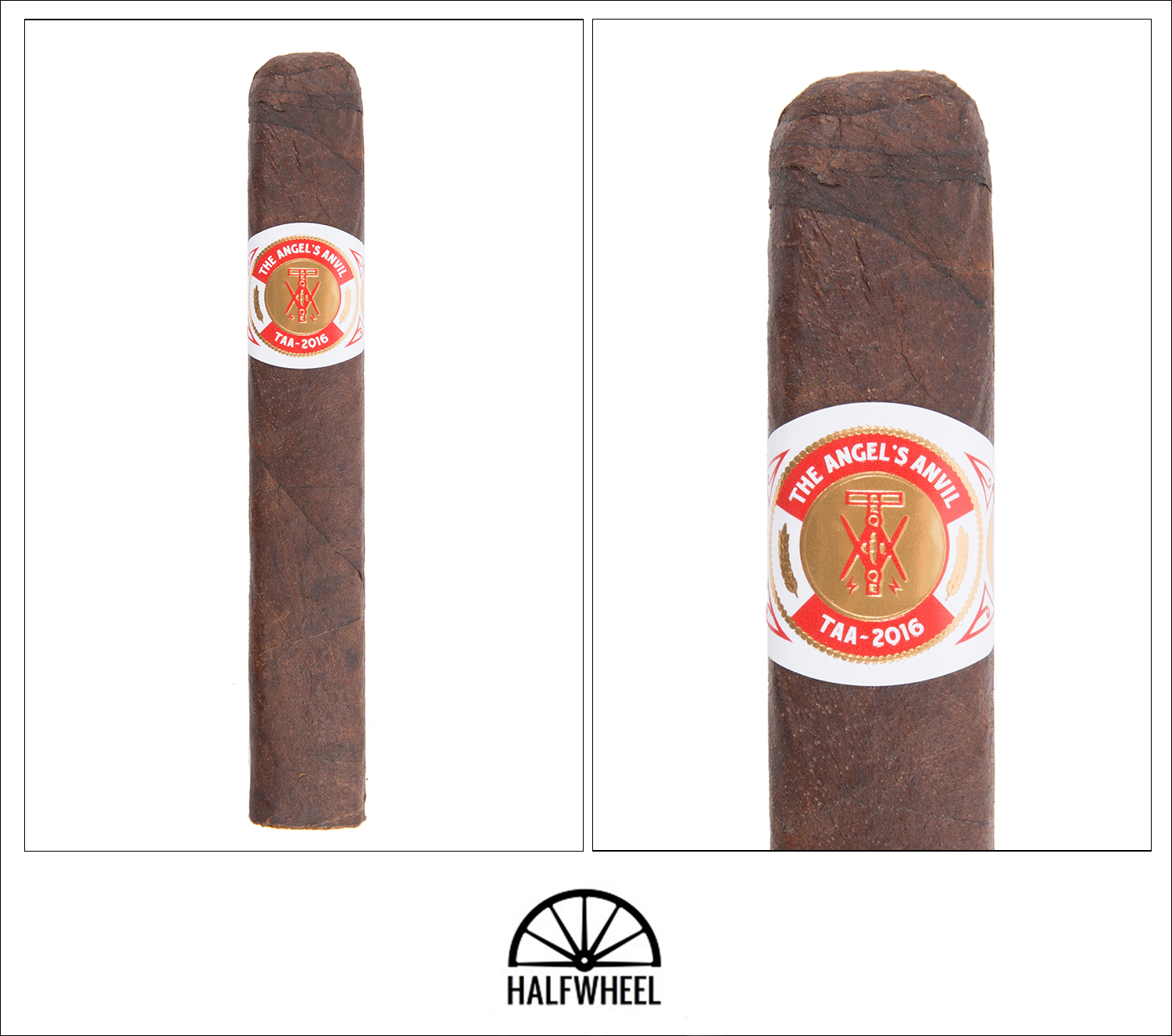 In addition to the new color scheme and blend, this is also the first of The Angel’s Anvils to be box-pressed; it’s a rectangular, chocolate bar-style press with rounded edges. The wrapper smells of chocolate, raisins and some lacquered wood. The foot of The Angel’s Anvil 2016 has oatmeal and raisins as well as a bit of a foreign substance that smells like paint. These were purchased out of a retailer’s humidor and I didn’t smell the rest of the box, but every cigar I smelled had a small bit of paint in the foot, which was odd. The good news is the cold draw doesn’t show any signs of paint, instead there’s oak, some barbecue meat and a sweet ketchup flavor.

It starts with oak, berries, sawdust, toastiness and some dryness. While the flavor doesn’t seem to be affected by the slower start, it does take me a while to actually get the cigar lit. The toastiness quickly takes the dominant position of The Angel’s Anvil 2016, surrounded by dark earth, berries and a cool, refreshing ice water-like sensation. It’s not a flavor, rather a sensation that reminds me like ice water hitting a dry mouth. Midway through the finish there’s a bit of harshness in the earthy mixture, but it’s not particularly strong. There’s nothing wrong with the construction, but smoke production is slightly below average, likely because the cigar is not entirely lit. Body is medium-full while the strength is medium. 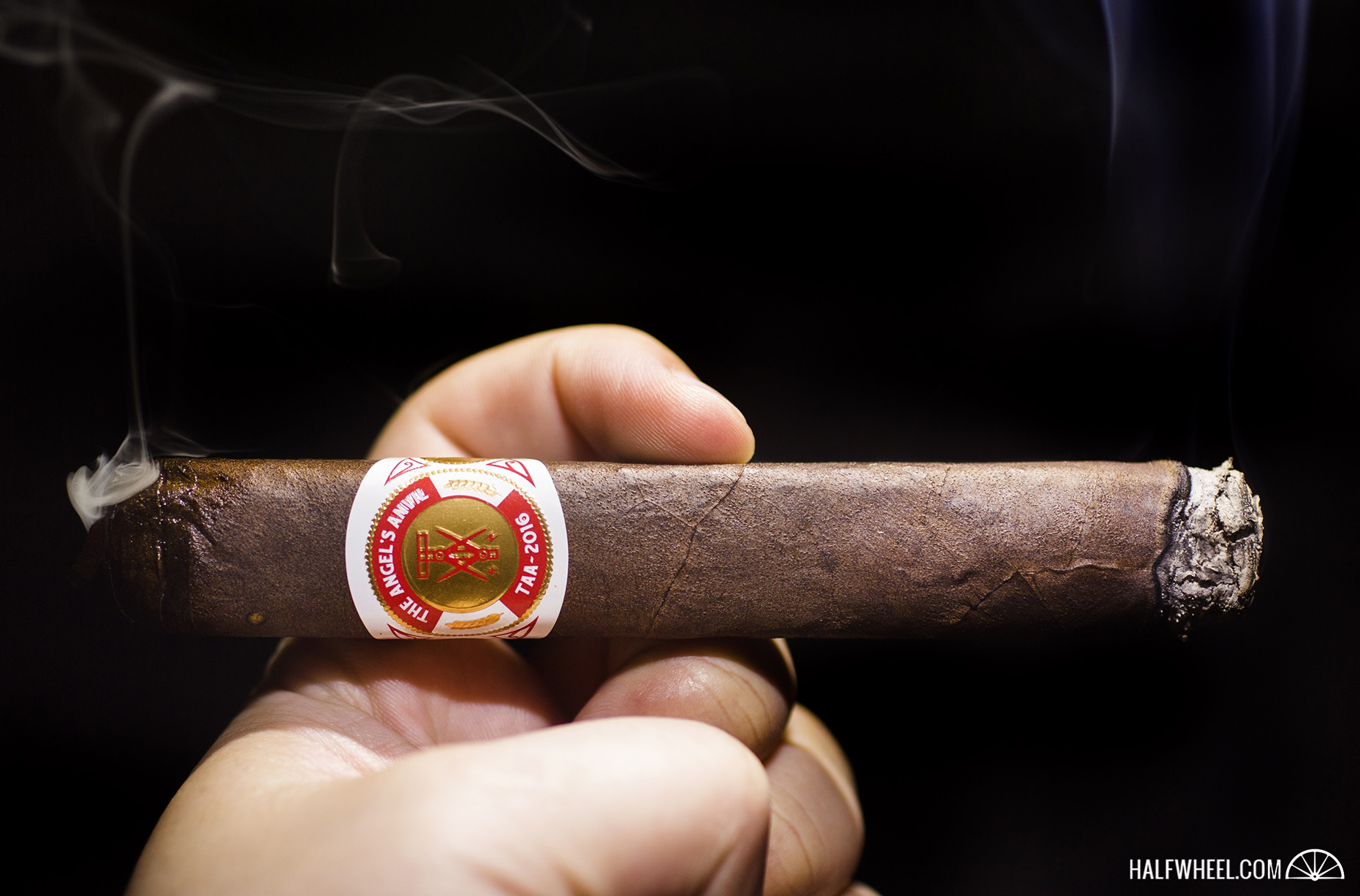 I continue to put the lighter to good work as the second third of this year’s The Angel’s Anvil enters the middle portion. It’s not that the cigar is tunneling or having major issues, it just seems that some parts want to burn slower than others, which is saying something, given it’s 90 minutes in before I’ve reached halfway through. Flavor-wise, the toastiness is still the dominant force, but there’s acorns, earthiness and Himalayan salt. Not much else is changed, the flavor is still medium-full, still leaves the palate pretty quickly before the earthy finish kicks in. When I concentrate to find flavors, the final third provides quite a bit to like; underneath what is still a very toasty profile, there’s some strawberries, a watered down whiskey, almost like smelling an empty glass of Maker’s Mark and some peanut butter on the back of the throat and through the nose. The finish also adds some unique flavors, in particular a dough taste that reminds me of burnt pizza crust. Towards the very end, there’s some herbs on the finish. The cigar seems to burn a bit faster in the final third, but it’s still extremely slow. The cigar ends with strength at medium-full, a change that seems to have taken place in the final third. There are times in which I like a cigar and it scores a lot worse than I actually feel about it. The Angel’s Anvil 2016 had a chance to be the opposite. If I removed the deductions for the touch-ups, the cigar would have scored really well and that’s because there's not much objectively wrong with the cigar. The flavor profile is solid, at times with a lot of nuances, but between the dominant earthiness and the utterly slow burn rate, I was bored for much of the cigar. A decent cigar, but probably not even in the top of half of Crowned Heads’ stable.