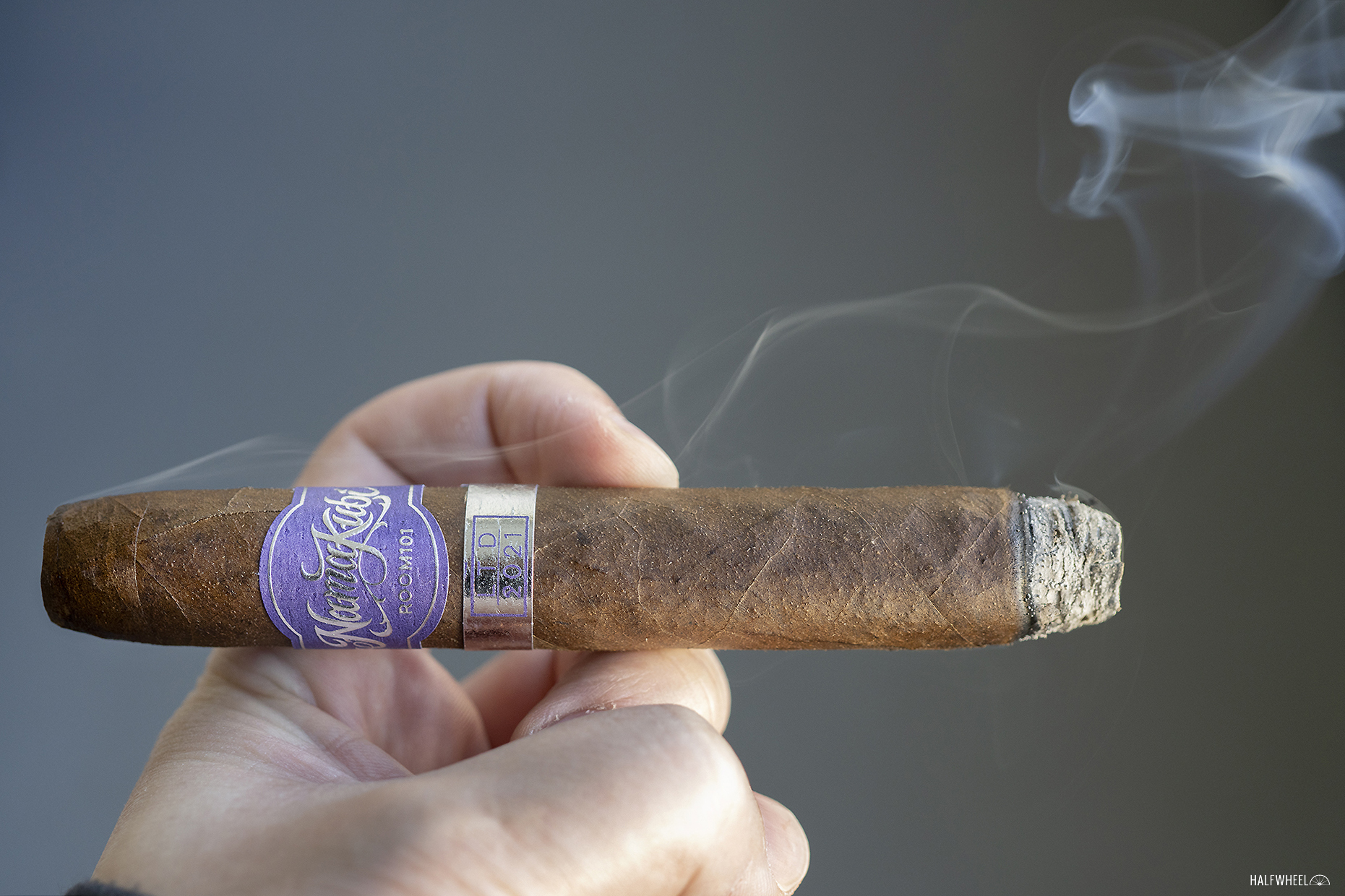 My most recent review started with me writing about how it had been a while since I had written “what’s old is new again,” but right on cue, it’s back.

Late last year, Room101 released an updated version of the Namakubi, which debuted in 2011 back at a very different time for both Room101 and this website; in fact, halfwheel didn’t even exist. The original Namakubi was a regular production line made at the Camacho factory using an Ecuadorian habano wrapper over a mixture of Dominican and Honduran tobaccos and there was also a follow-up brand—the Room101 Namakubi Ecuador—introduced in 2013. Both lines went away in 2017 when Room101’s founder Matt Booth announced his short-lived retirement from the cigar business in early 2017.

When Booth returned in mid-2017, it was still using his Room101 name, but pretty much every other part of the public-facing Room101 changed: new distribution model, new factory partners, and all new lines and blends. While some of the older Room101 brands have returned, most of Room101’s current portfolio are cigars that it was not selling at the end of 2016. 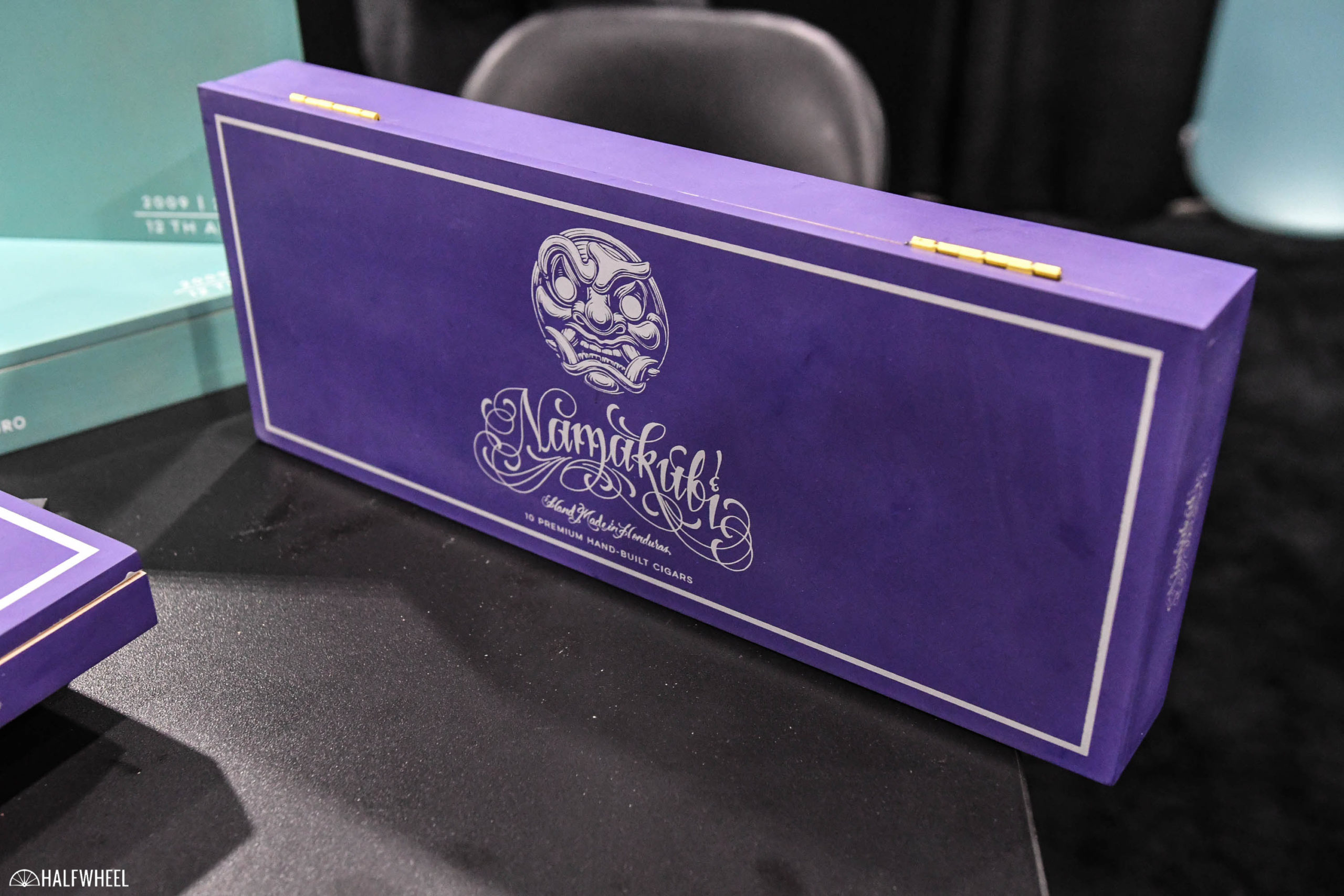 In November 2021 Namakubi returned to shelves, but in a very different manner than before. One similarity is that the blend components—Ecuadorian wrapper, Honduran binder, fillers from the Dominican Republic and Honduras—are, on paper, the same as before. Given that the factory has changed—the 2021 version was made at Tabacalera William Ventura—it seems unlikely the tobaccos are from the same sources, and even if they are, a decade has passed.

However, the look and concept are very different. A single size returned—the Room101 Namakubi Ranfla, a 5 1/2 x 50 perfecto—and unlike the original release, this cigar is limited. The packaging has changed from the red and black color scheme used before to purple and silver, a move that was done to bring attention to Alzheimer’s. Furthermore, a portion of the proceeds from the sales of the Namakubi is being donated to Keep Memory Alive, a charity based out of the Cleveland Clinic Nevada dedicated to Alzheimer’s research and care. 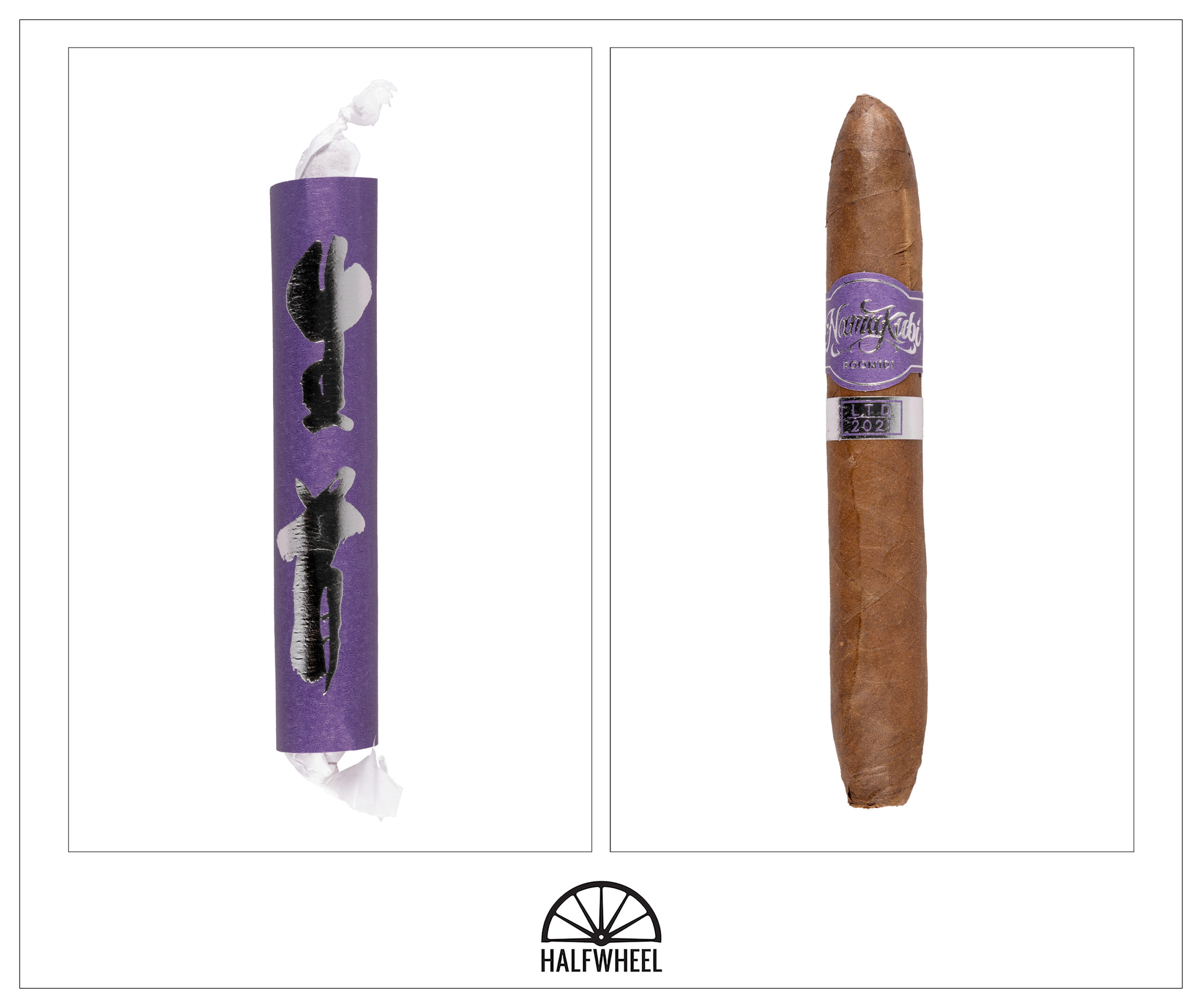 After removing the outer purple paper, underneath is a cigar wrapped in tissue paper. Once that’s been removed, the end result is an interesting-shaped perfecto vitola with a great dark, uniform color. The seams in the cigar are tight, though they are a bit jagged on one cigar and the veins are noticeable. I cannot pick up much in the way of aroma from the wrapper other than a faint hint of apples, but beyond that I can’t smell anything. My guess is the tissue paper didn’t help to lock in the aroma, but I’m guessing it would have been pretty mild even if the cigar was stored in cellophane. The foot’s aroma is much easier for me to determine, there’s a medium profile with scents of cedar leading some floral flavors. On the first cold draw I take, there’s a sharp red pepper, but after taking a few more dry puffs it’s completely gone, leaving behind a mixture of graham cracker, Dr. Pepper syrup, cedar and some orange jam flavors at the end.

Once lit, the Room101 Namakubi Ranfla provides flavors of cedar, oak, toastiness, some dry earth, an underlying sweetness and some tartness on the side of the tongue. After just 15 minutes, I’ve smoked more than an inch of the cigar and, as such, it’s time to start writing down tasting notes before the first third is officially over. The profile is now nuttiness and grains slightly edging out an oak flavor. Beyond the trio, there’s at times a saltiness that can remind me of a pretzel, along with black pepper and a caramel sweetness. The finish has a relatively even mixture of leather, creaminess, white pepper, black pepper and lemon. It’s surprising to me that the finish is fuller than when the smoke is in my mouth and also radically different in terms of the type of profile. Retrohales have creaminess, peanut shells, white pepper, black pepper and charred oak. The finish has black pepper and cedar in the nostrils while peanut flavors and a touch of chocolate syrup are leftover in the mouth. Flavor is medium-full to full, body is medium-full and strength is medium-plus. I rarely ever mention a cigar’s aroma, but the scent of the smoke reminds me a bit of a Middle Eastern food truck or a place with a vertical meat broiler, just a ton of meaty and umami scents. Construction is great, though I find the draw a tad bit tight.

I was caught off guard by how quickly the first third burned through, but even with a lot more awareness to a quick burn, I’m floored by how short the second third of the cigar takes from a time perspective. On one sample, it lasts fewer than 20 puffs. I try to extend it out a bit by smoking slower, but then I realize the burn line isn’t really that affected by a slower puff rate, instead, the Namakubi is just burning tobacco whether or not I’m puffing at a remotely normal pace. The reason why I’d prefer it to slow down is because of how much I enjoy the flavor in the second third. There’s a lot of meaty flavors that overwhelm the woody flavor, now just a cedar note. A creaminess emerges—on one cigar the meaty sensations make it more like a gravy—along with mild amount of black and white pepper. The finish has nuttiness and oak over some pear sweetness and an inconsistent black pepper. Retrohales provide great contrast to when the smoke is in my mouth. Lemon and nuttiness lead the pear sweetness, cedar, a mild white pepper and some saltiness. The finish has a very sharp white pepper that reminds me of retrohaling Cameroon tobacco. Beyond that, there’s cedar, oak, saltiness and lemon. Flavor is full, body is medium-full and strength is medium-full. While the cigar wants to burn at an incredibly quick pace, two cigars need slight touch-ups to help with waning smoke production. 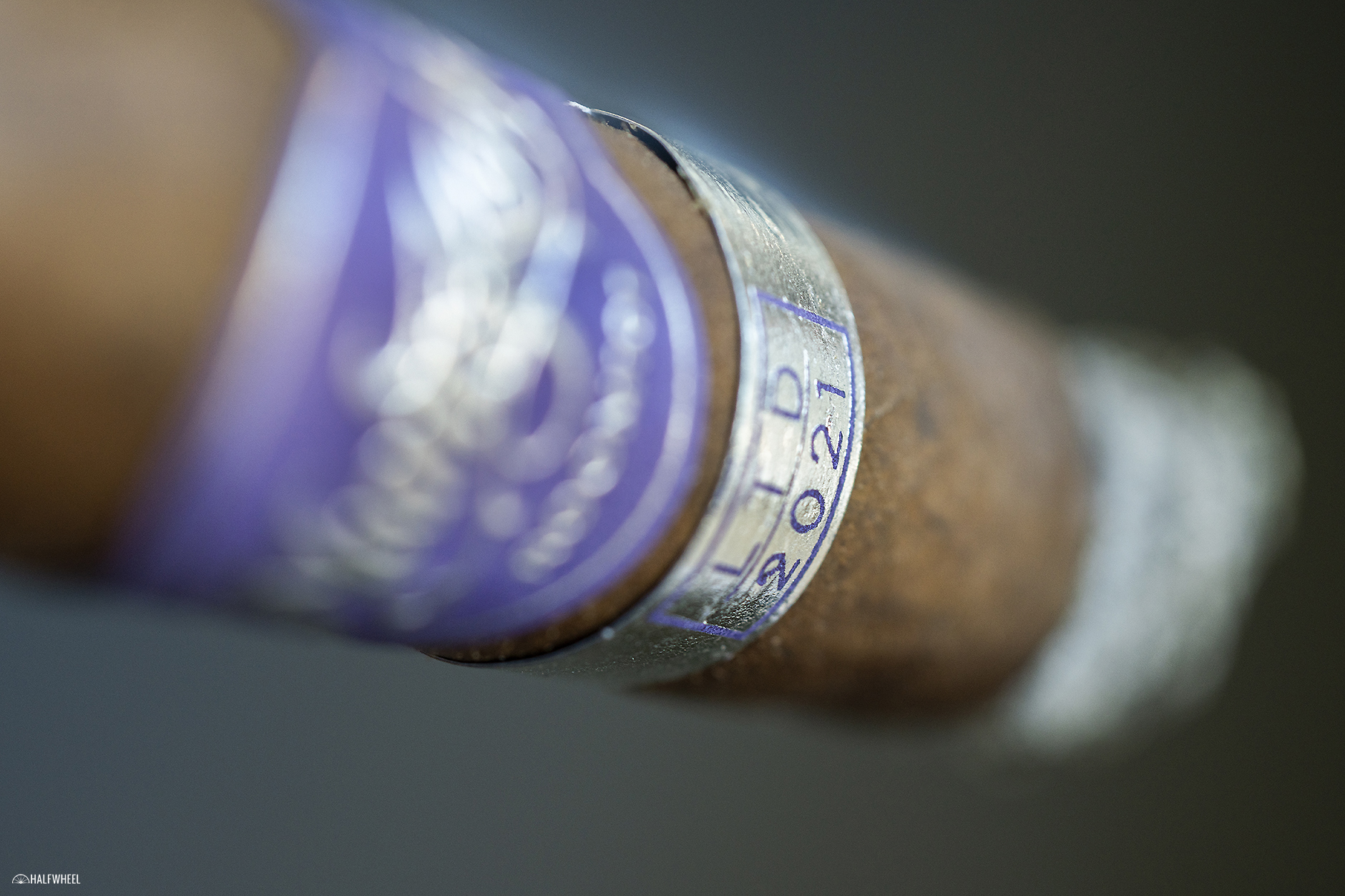 The Room101 Namakubi Ranfla takes another big swing at changing the flavor profile. It’s not as exciting as the middle part, but I find the profile to still be favorable. It’s mainly earthy with some artificial vanilla, white pepper and leather. The finish has creaminess, saltiness, cedar and leather. When the smoke is in my nostrils there’s scents of orange peel, cedar, leather and white pepper. It’s more or less the same during the finish, though I pick up some oak along with a more distinct pink saltiness. Flavor is medium-full, body is medium-full and strength is medium-plus. The real struggle during the final third is just how quick it burns. I feel the smoke getting a bit warmer and sense the cigar is coming to an end, then, five puffs later, I look down and see there’s less than an inch of cigar left. Fortunately, the Namakubi can be smoked to the finger-burning range, but like the second third, I wish I had more time to enjoy it. 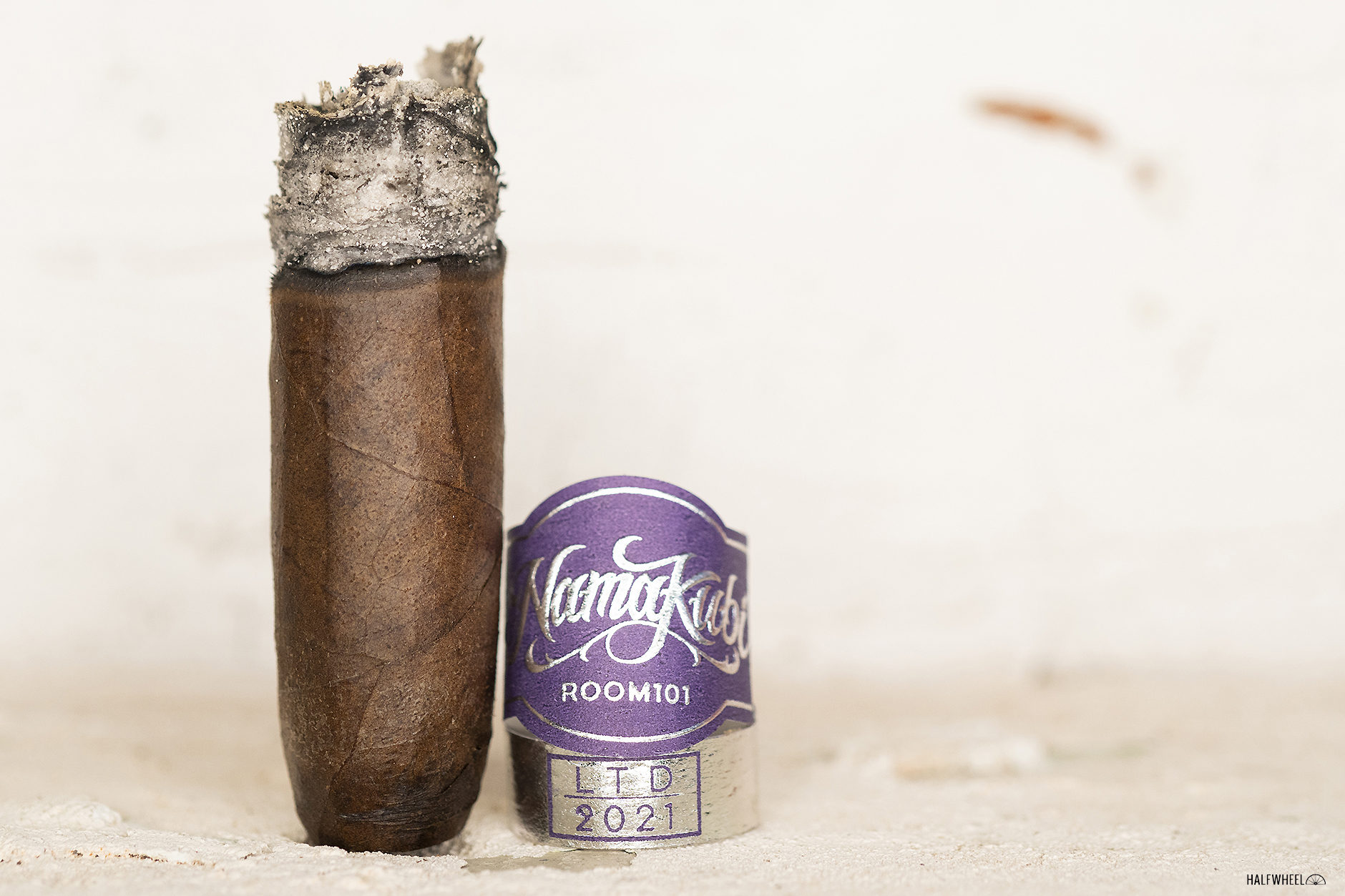 At its best, this is an excellent cigar. In particular, the second third’s flavor profile was a great, unique profile. But—and this is one of the big cons—it was tough to enjoy those puffs for very long. In almost every other instance I've used that phrasing, it's because the good puffs were a minority of the total puffs in a cigar. In this case, it's because there just weren't that many puffs in comparison to how long a cigar like this normally takes me to smoke. And if this was a $7 cigar, it wouldn’t be much of an issue. At that price point, it’s a relatively affordable cigar that provides a lot of great flavors, even if it’s a bit short time-wise. The $14 sum would be more than worth the combined two hours of enjoyment I would get, but at $25 per hour, it becomes a real luxury. We factor neither price nor smoking time into our scores, but I really struggle with how to evaluate that in comparison to how much I enjoyed it. In the end, I suppose it’s better to leave people wanting just a little bit more of a good thing. That’s certainly the case here.