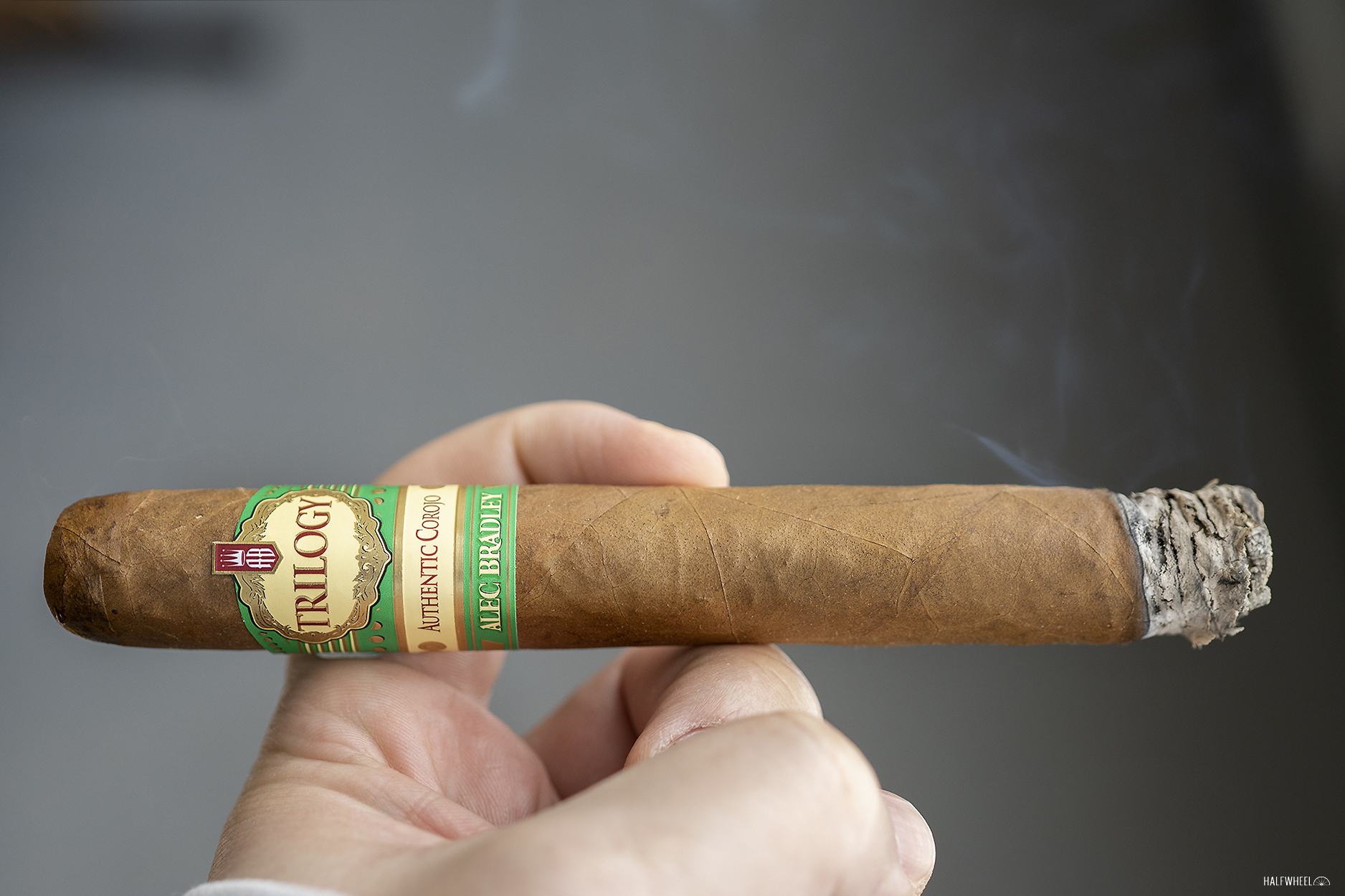 It’s been a while since I’ve written about what’s old is new again, but for the better part of two years, seemingly everywhere I looked in the cigar industry, a company was rereleasing an old product.

There are few instances of what’s old is new again quite as interesting as the Alec Bradley Trilogy. As the name implies, it’s three different cigars, however, the tri reference didn’t stop on the number of cigars. The most notable feature of the cigar is that the cigars are box-pressed in a manner that resembles a triangle.

The Alec Bradley Trilogy debuted in 2002 in three different blends: Authentic Corojo, Exotic Maduro and Native Cameroon. Alan Rubin, founder of Alec Bradley, said the shape was inspired by a visit to Home Depot where he purchased a saw and created the prototype molds himself. Ultimately, the cigar was discontinued in 2010. Bradley Rubin, one of Alan’s sons who now works for the company, is credited with spearheading the efforts to get the Trilogy back on the market, and last year, his wishes came to fruition.

Alec Bradley resurrected the Trilogy using the same basic concept, though the company says the blends are not identical to the original. Each cigar measures 6 x 52, has a triangular press and is limited to 2,000 boxes of 10 cigars. The Authentic Corojo—the cigar reviewed today—uses a corojo wrapper from the Jamastran Valley in Honduras. All three cigars use a Connecticut-seed binder grown in Honduras and filler tobaccos from Honduras and Nicaragua, and they are all priced the same, with an MSRP of $15 per cigar. 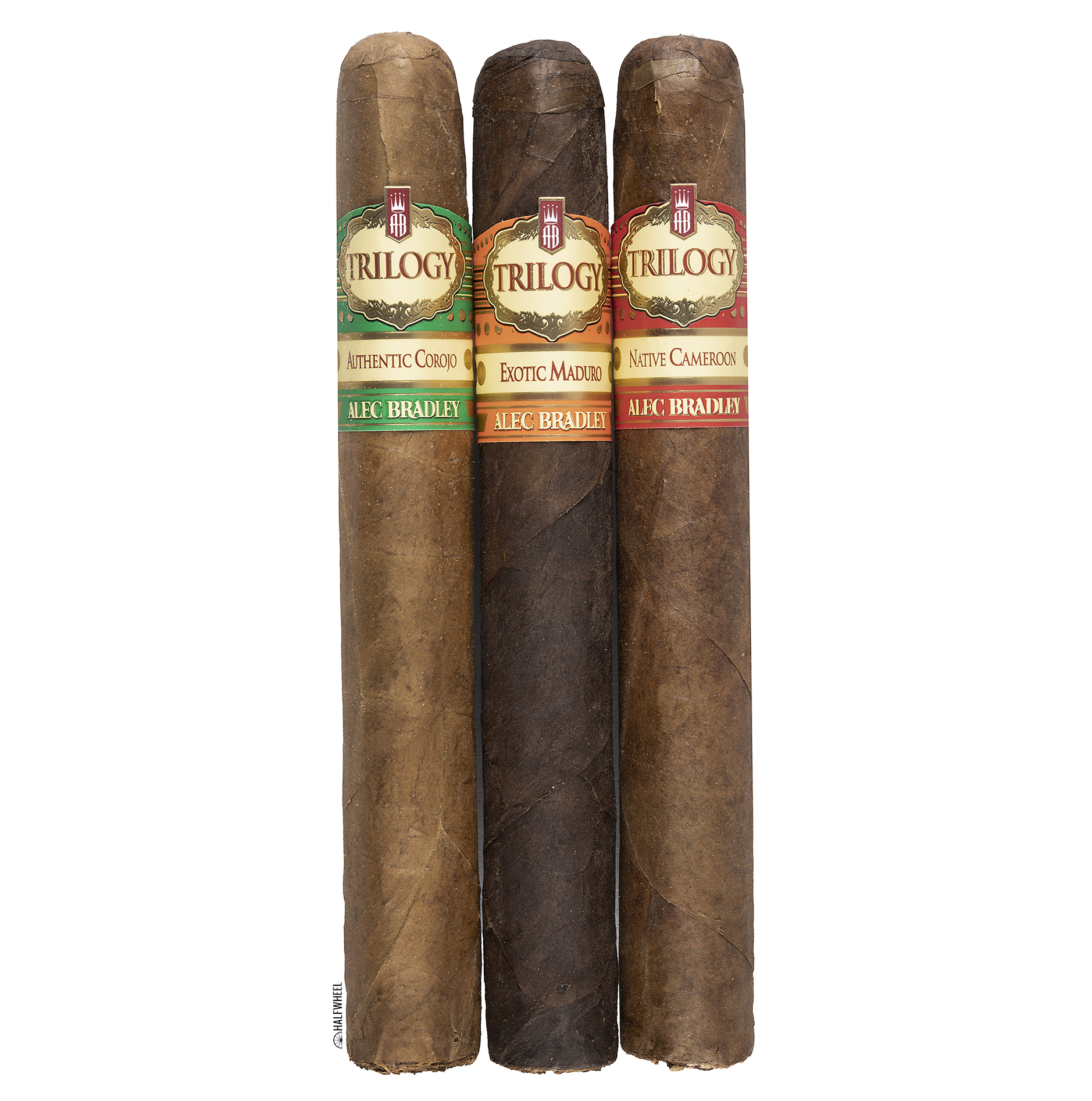 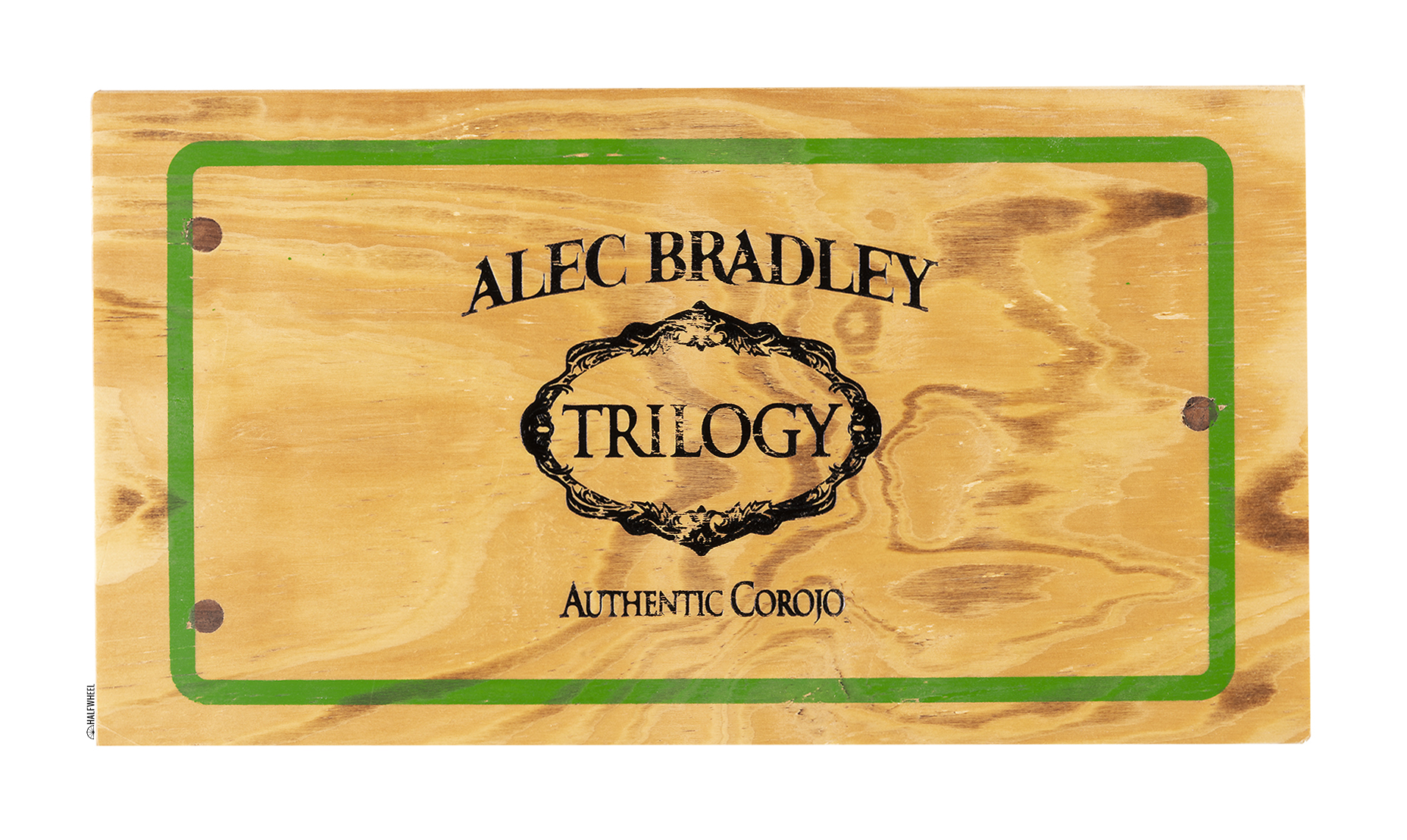 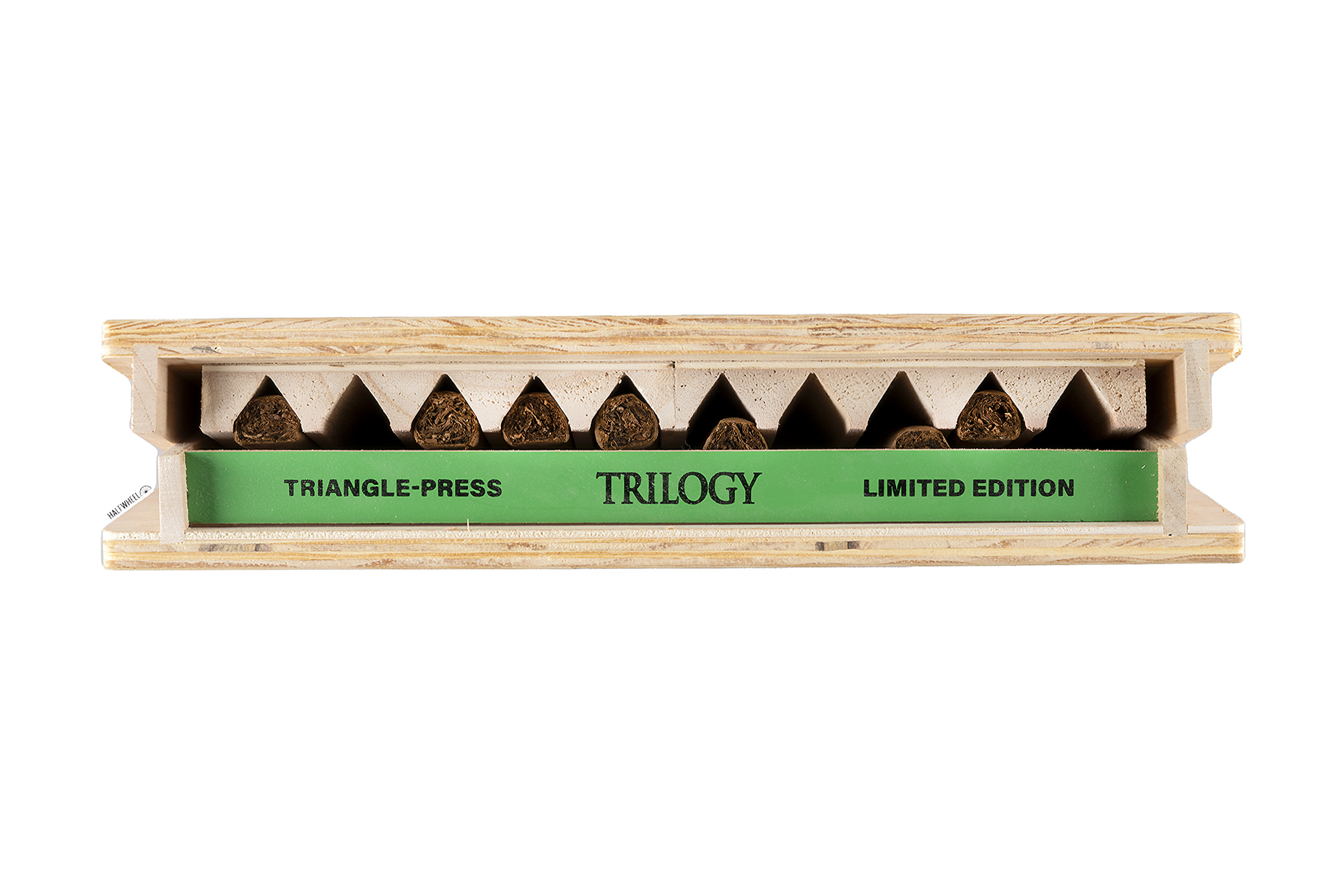 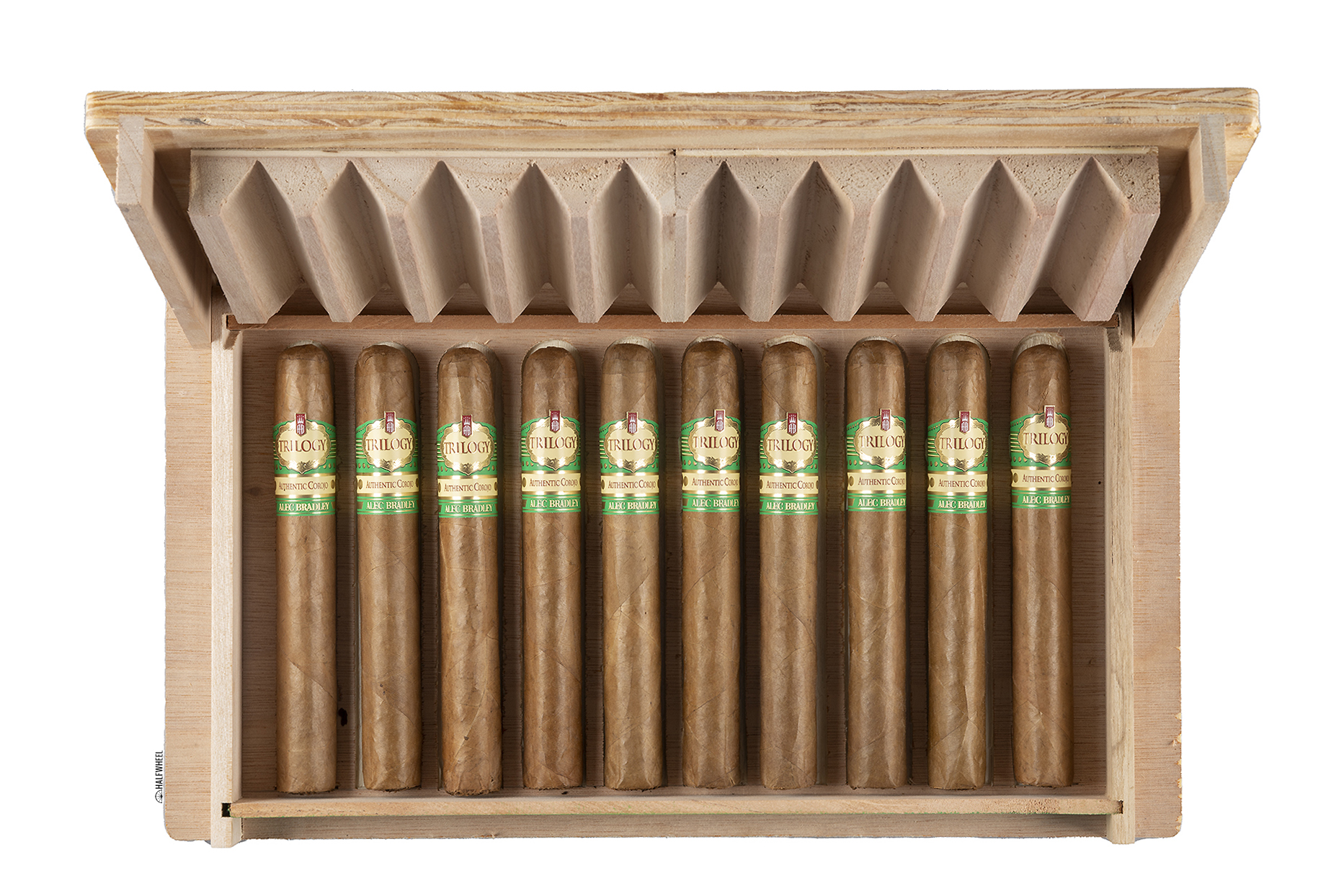 As if the triangular press wasn’t unique enough, the boxes are designed to look like cigar molds. While they aren’t identical to a cigar mold in function, they are similar enough in materials and weight that I’m guessing many people might think these are the molds that were used to create the cigars. 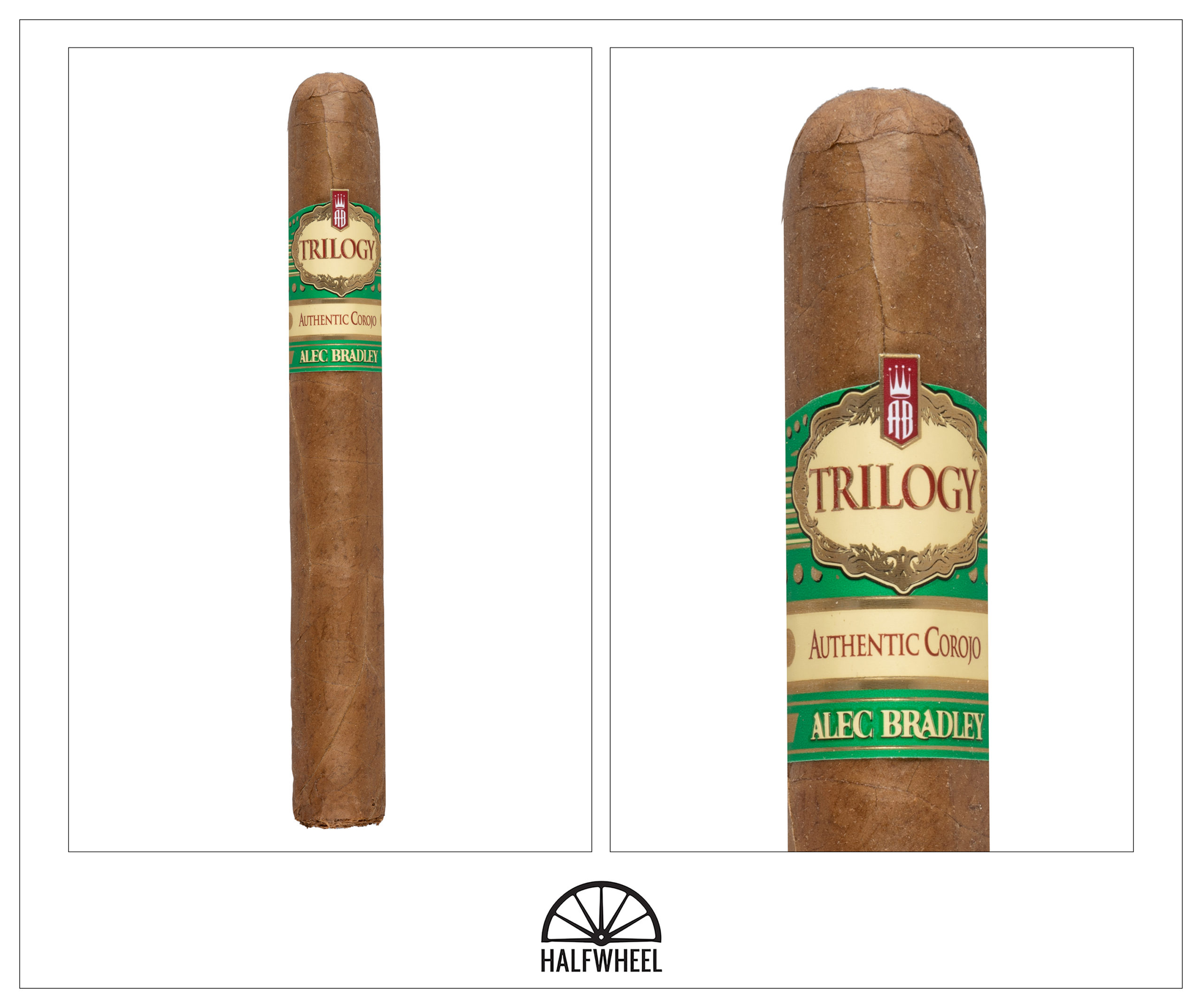 There are few cigars I’ve reviewed in the last year that have quite the entrance like the Alec Bradley Trilogy Corojo. The mold-like boxes are heavy, unique and effective. Beyond looking like a mold, it’s also unique in the sense the cigars are lying in the bottom of the box with quite a bit of space in between each cigar. There are some channels designed to keep the cigars in place, but I could see a problem if the cigars move and you try to close the box. Fortunately, the channels do a good job holding the cigars into place, but closing this design requires a bit more attention than a more traditional one. Once out of the box, the unique shape is readily apparent. It’s not as radical as some of the designs from Plasencia or Quesada, but there’s not another cigar I can thing of quite like the Trilogy. The wrapper’s color is pretty light and there’s very noticeable stretching of the wrapper, and I wonder if that’s related to the unique shape. Aroma-wise, the wrapper has scents of leather over barnyard and oats. It’s not that acidic, but it’s more acidic than sweet or savory. The foot is medium-full and reminds me of the aroma of dark chocolate over some blackberries and bread flavors.

The last couple of cigars I’ve smoked for reviews haven’t had the most impressive starts, but the Alec Bradley Trilogy Corojo starts with flavors all over my mouth: sweet cedar, earthiness and creaminess. There’s also white pepper on the tip of my tongue. As the cigar gets burning, things get increasingly spicier. That said, the dominant flavor is an oat sensation with some nuttiness accenting it. Beyond that, there’s cedar, black pepper, saltiness and lime. The oats and cedar are all over the mouth, but the lime and saltiness seem to only be at the rear of my mouth, while the black pepper is restricted to just some parts of my tongue. After the smoke leaves my mouth, I taste oak, oats, leather, red pepper on my tongue and a bit of a mineral flavor on the edges of my tongue. When the smoke goes through my nostrils, the flavor gets fruitier thanks to berries and watermelon, but there’s also some peanut butter and mineral flavors. Texture-wise, the smoke feels thinner than through the nose than when it’s in my mouth. The finish has herbs, minerals, peanut butter and black pepper. The quartet is pretty even intensity-wise, though the black pepper and mineral flavors last longer than the other two. Flavor is medium-full, body is medium-full and strength is medium-plus. Construction is great on two cigars, though one needs a touch-up to help with an uneven burn.

Nuttiness and creaminess race towards the top of the flavor list during the second third, though it’s not like the peanut butter I found during the first third’s retrohale. Those two flavors lead minerals, white pepper and some underlying saltiness. The finish has a lingering white pepper at the tip of the tongue and then nuttiness everywhere else. If I try to isolate the mineral flavor I can still find it on the finish, but it’s basically just nuttiness with the white pepper on one part of my tongue. Retrohales come alive thanks to red pepper and some fish sauce, but minerals and earthiness are slightly stronger intensity-wise. The finish has red pepper, harsh earth and minerals; quite frankly, it’s mostly just a harsher version of the profile I get when the smoke is still in my nostrils. Flavor remains medium-full, body is medium-full and strength ranges from medium to medium-full. At least one touch-up is required on every cigar, each a result of one side of the cigar not burning properly. One cigar needs help with smoke production as well, but the main issue is parts of the cigar not burning. 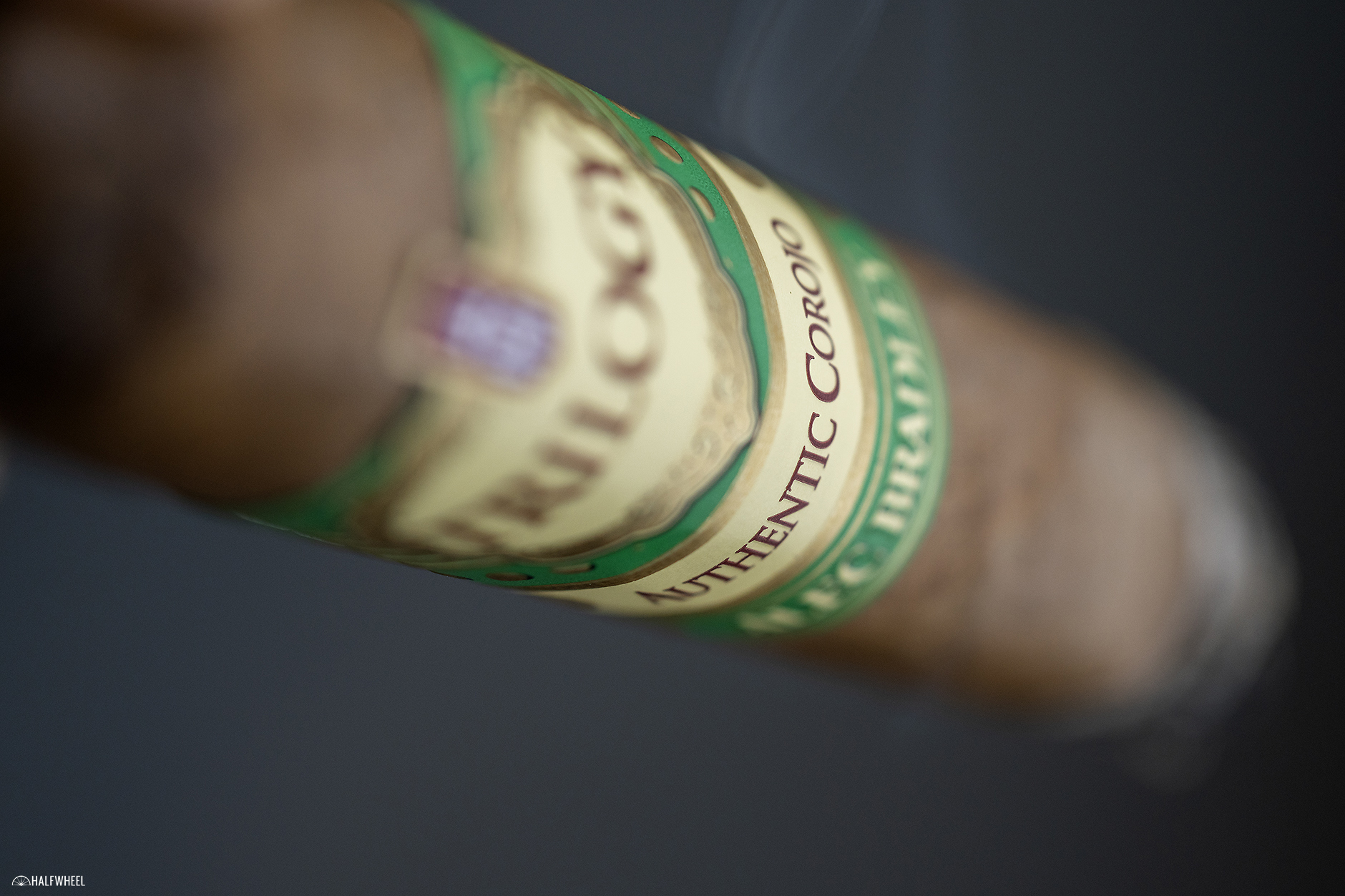 The final third of the Alec Bradley Trilogy Corojo sees oak take the leading flavor spot, edging out some generic starchiness that seems to be all over my mouth. There’s also some sourness, creaminess, earthiness and white pepper, though it’s no longer as limited as to where I can detect it. The finish has a Ritz cracker-like flavor over some sourness and creaminess. Retrohales have mineral flavors and white pepper over some lemon flavors, but the smoke is getting to a temperature level where it’s tougher for me to decipher the flavors. The finish has red pepper, oak, white pepper and some more of the generic starchy flavors, almost like an unfinished roux. Flavor is medium-full, body is medium and strength finishes closer to full than medium-full. Construction is fine on one cigar, while two more need help with uneven burns. 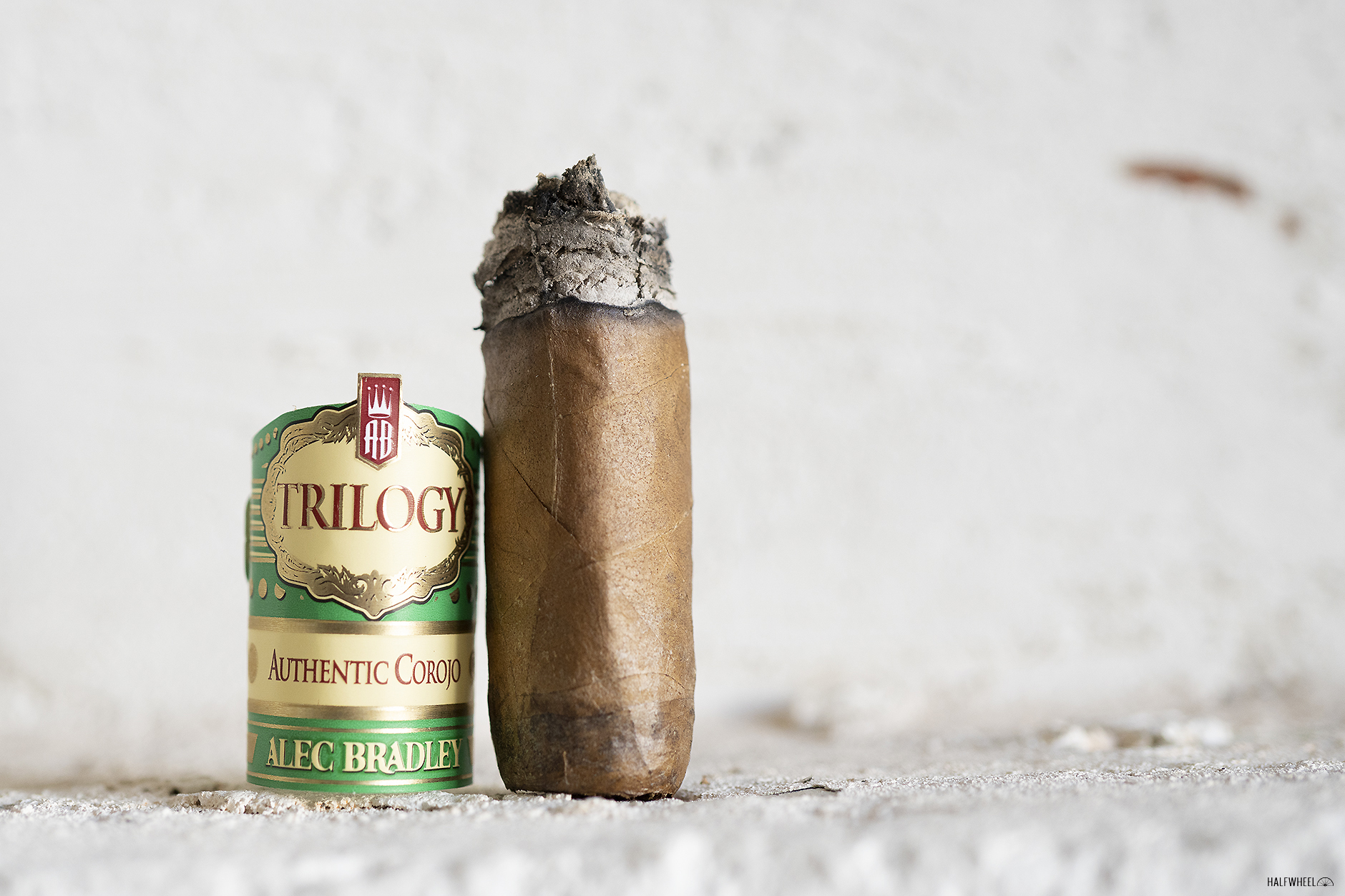 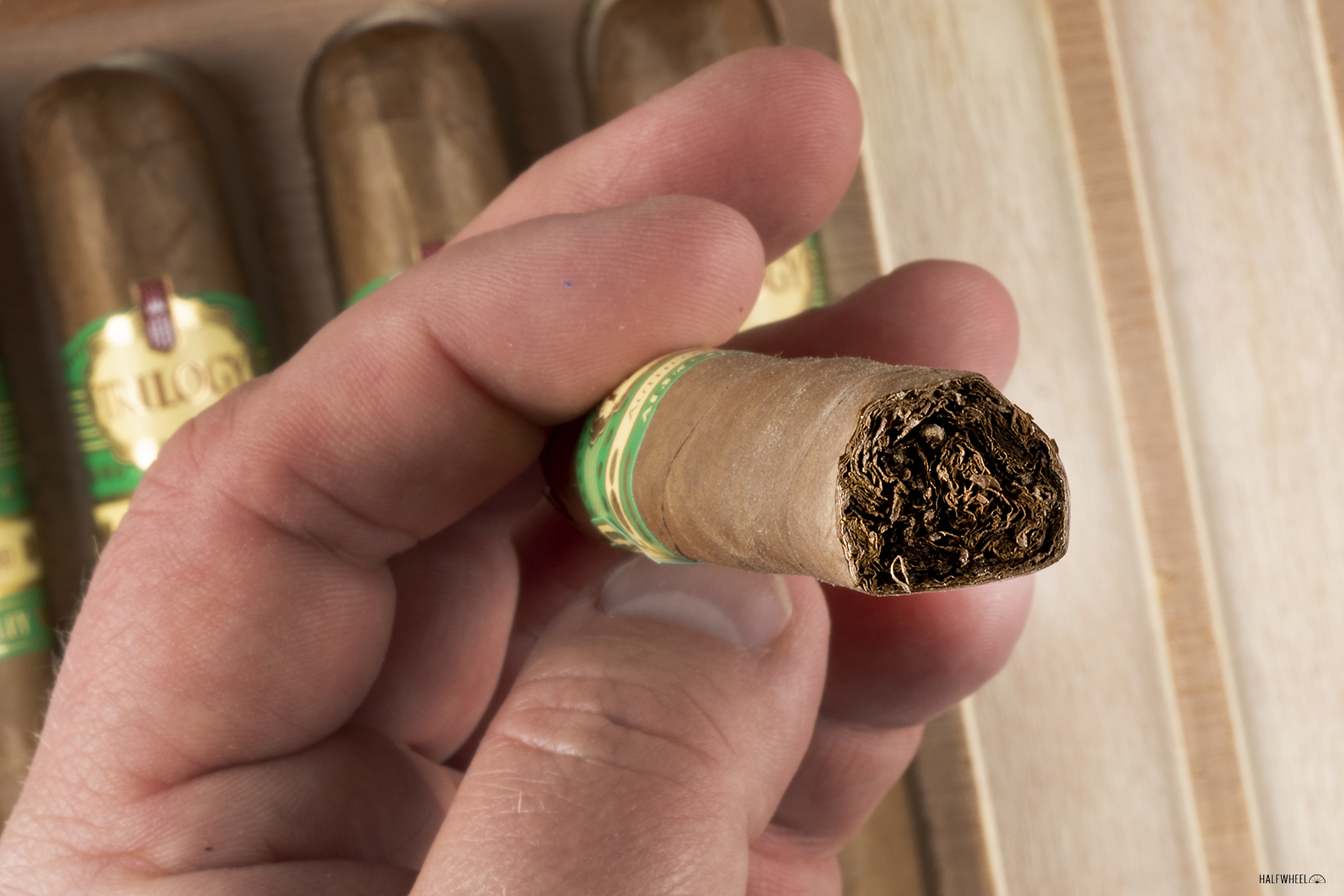 This is one of the more challenging cigars to score because it’s very dependent of how I am asked to look at the cigar. If it’s a matter of its high points, there are plenty of moments where the profile is both enjoyable and complex. Conversely, there are other puffs where the balance gets off and the sharpness of minerals and pepper flavors lead the dance. I tend to look at cigars from what takes place in the middle 50 percent versus the upper and lower quadrants, and that’s a conclusion that isn’t my favorite. In that regard, the Alec Bradley Trilogy Corojo is fine. That seems like a bit of cop-out, but that’s the truth of the matter. It’s more enjoyable than it is not, but I just wish it had a bit more. Whether that’s sweetness to balance out the other flavors or some body thickness to be more in line with the flavors it delivers, I thought the Trilogy wasn’t yet a complete cigar, almost like it’s worth one more minor revision. Perhaps that gets resolved during aging, perhaps it doesn’t. Whatever the case is, this cigar is far from a gimmick and there’s certainly more to like beyond just its unique appearance.