Another of the new releases by the reinvented Drew Estate, the Liga Privada T52, has quite a bit going for it. It is a multi-country blend of tobaccos; the core of which are Honduran and Nicaraguan fillers and the Brazilian Mata Fina binder is grown by José Fuego, father of Jesus Fuego.

The blend is exciting, but the wrapper is what is causing people to take notice. It is an exclusive wrapper that the folks at Drew Estate has dubbed “stalk cut habano.” According to Steve Saka, president of Drew Estate:

Stalk Cut is when the entire stalk is cut and removed from the farm, then hung to dry by the stalk in the barn. Regular Tobacco Picking is when the tobacco is picked from the field, starting at the bottom of the plant and then moving up, then put into little hands of tobacco and hung in the barn.

That all sounds well and good, but I was interested to see how a wrapper like this would taste on a stick. The aforementioned wrapper is a nice, lighter chocolate brown, and is extremely toothy, with quite a bit of oil on it. My first thought when picking it up was to compare it to the Tatuaje Frank, which also has a very toothy wrapper but no oil. In this case, I think I would give the nod to The Frank, but it is a close call. The wrapper also smells distinctly of cinnamon and cloves, a very interesting smell and different from most cigars, as an aside, when I first sniffed it, I thought it smelled quite a bit like a hot drink my mother used to make us in wintertime, a cinnamon/spice/clove cider that I loved.

The stick itself is very dense much like the original Liga Privada. It seems to be a recurring theme with the new Drew Estate offerings and I like it quite a bit. It feels good when you are smoking it.

The first third has quite a bit of spice from the start that combined with some other flavors of coffee, leather and some floral notes to make a great opening. I was very impressed with the notes coming off it and underneath it all is a taste that I could not identify. I am going to assume this is the unique wrapper. 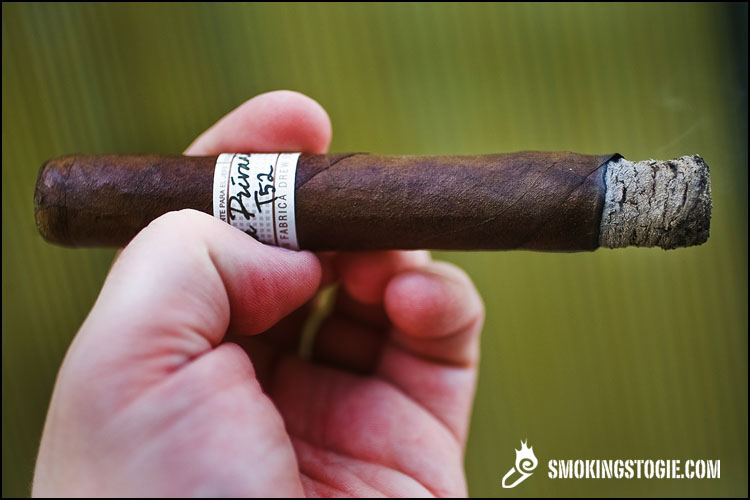 As an aside, I thought this was interesting when I saw it. I have seen a lot of ash in my days, but I have never seen ash that looked like this. A brown and white mix that is very distinct in colors all the way down the stick. The second third changed almost totally from the first. The spice calmed down quite a bit, but was still present, and the flavors changed almost 180 degrees to more of a leather and toasted nuts combination with some coffee thrown in for good measure. I was a bit surprised to taste such a turnaround, but there you go. The final third seemed to combine all the flavors from earlier in the stick; just a mishmash of tastes that was almost overwhelming and very hard to distinguish from each other. However, the spice did die down to almost nothing and it did not get harsh at all, all the way to the nub. I enjoyed this smoke quite a bit, and it was extremely complex in the tastes it offered. It burned and drew like a champ, and while I liked the No. 9 quite a bit, if the price is close, I will be smoking these. Interestingly enough, I think I prefer the Flying Pig. It is very close, but that is really more of a personal thing, as I love the feel and look of that stick better, but I think most people will love this one more. You will want to try this cigar, if only to see if you can pick out the flavor I was not able to describe.