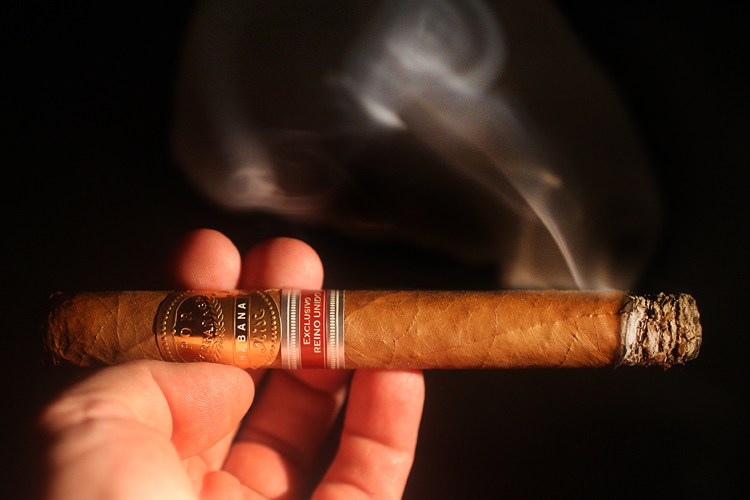 In 2007, before people started getting a bit jaded on the whole Edición Regional program, Habanos S.A. released the Por Larrañaga Magnifico, a regional release for the U.K.  The vitola is an almost exact replica, only 2mm shorter, of the famous Por Larrañaga Magnum, which is thought by some to be one the greatest cigars ever made until production of it was ceased in the 1970s.

Only 1,408 numbered boxes were produced and the stunning gold leaf bands are a replica of one used by Por Larrañaga almost 100 years ago.

Here is what I said in my original review, way back in August of 2009:

This is probably one of the best tasting young Cuban cigars I have had. The Magnifico definitely needs time to develop, but even now you can taste the quality and the potential for greatness. I predict in five years people will be naming this cigar as one of the best in the past half decade. So if you run across one in the future, do not hesitate to buy, almost to the point regardless of price, the Por Larrañaga Magnifico embodies everything great about cigars.

The Magnifico starts off from the first puff with an intense and amazingly rich flavor of very sweet honey and maple, along with just a bit of spice on the lips and white pepper on the retrohale. Flavors of oak, leather and hay well continue to be overwhelmed by the sweetness well into the second half. The profile starts out a bit earthy, but shifts to more creamy as the cigar progresses. The second half sees the profile shift again with flavors of sweet vanilla, nuts, creamy oak and even a bit of espresso. As the Magnifico gets closer to the end the sweetness only gets stronger, but so does the spice that is present, making for an amazing finish on the palate.

Construction is phenomenal, perfect burn line and draw for the entire Magnifico. Strength starts out as a mild-medium and really does not go much further than that, ending up at a solid medium by the end of the cigar. Final smoking time was an easy one hour and 45 minutes.

I knew when I first smoked this cigar that it was something special and that is even more the case now. Flavors are amazing, finish is amazing and construction is amazing. Even the smoke smelled great. In my opinion, the Magnificos are well worth whatever they are selling for now and will only get better with more time. Charlie and I have had many conversations about how great Cuban cigars can be, and the Por Larrañaga is one of those examples. Just spectacular in every aspect and one of the best cigars I have smoked in years. Wish I had bitten the bullet and bought multiple boxes when they were first released.