If you know me, you know that I have been nothing but impressed with the Ramón Allones regional offerings in the past few years. In my opinion, they have proven to be the most flavorful and consistent consistent in the bunch. The Lusitanos is only one of two petit edmundos to be released this year, the other being the Juan Lopez Selección No.3 for the Benelux region.

The Lusitanos is limited to just 2,500 boxes of 10 cigars and like most regionals are individually numbered.

Here are some photos of the box itself: This cigar is obviously very small, but despite its measurements I actually like the size of it. It looks to be a perfect hour-long smoke and feels really great in your hand. It sports a nice Colorado shade wrapper with minimal veins and a slight oily sheen to it. It has a perfect triple cap and a firm pack to it. The aroma is sweet and spicy. I get a nice tobacco aroma mixed with some barnyard and a little bit of cinnamon. The cold draw is full of the sweet tobacco and a touch of cedar.

The first third starts off very toasty and sweet. Right off the bat, it reminds me of roasted marshmallows; a very nice combination! A few puffs into the cigar I also get a nice roasted nut flavor as well as some coffee on the finish, a very nice opening. 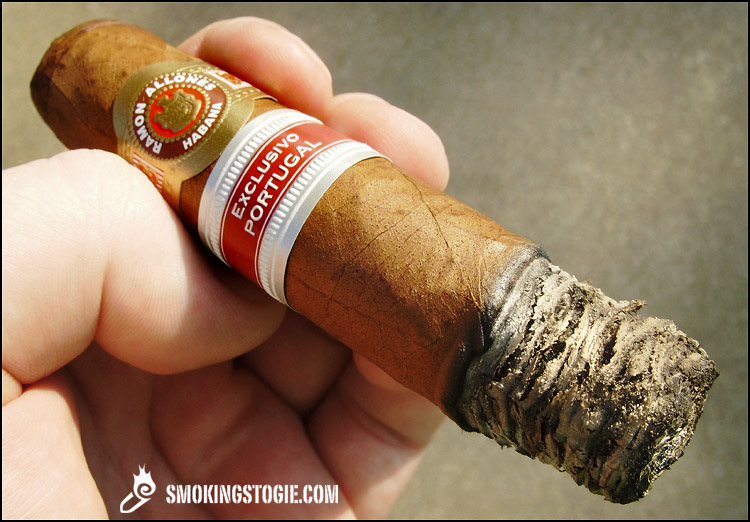 Coming into the second third I am still getting a really nice toasted tobacco flavor, but the sweetness has mellowed. The cigar has become a bit creamy as well, especially through the nose. I also get a faint wood flavor followed by a dark roasted coffee bean flavor on the finish. The cigar is burning very well, almost a perfect burn line so far and the ash is holding strong. Finishing up in the final third the flavors haven’t changed much from the last third. I attribute this to the small length of the cigar and find it to be pretty common. I did notice that the creamy note has turned into a buttery like flavor and feel. The smoke is very thick and velvet like on the tongue. The finish is quite long as well. The rich coffee bean flavor just sits on the tip of my tongue and slowly drifts to the back of my throat. I enjoyed this cigar a lot! I am glad to know that Ramón Allones is still putting out amazing regionals. I loved the toasted flavors this cigar had to offer. It had a perfect balance of sweetness and managed to stay so enjoyable and consistent through the whole smoke. If I had any complaint it would be the lack of spice and pepper. It really didn’t have much kick to it, but for some reason, I was okay with that during the smoke. The flavors were so clean that I forgot all about it. It’s a shame they only come in 10-count boxes.