For a relatively small marca in the Habanos S.A. portfolio, Quai d’Orsay has certainly received a fair amount of attention in the last few years.

In February 2015, Habanos S.A. cut the Quai d’Orsay brand down to just one size, eliminating the 7 x 47 Imperiales and leaving the 5 3/5 x 42 Coronas Claro. While going down to a single vitola didn’t carry the promise of a bright future for the marca, things would change in the not-too-distant future.

In August 2016, a leaked list of upcoming releases from Habanos S.A. began to circulate, and while the cigar company doesn’t comment on it, the list has proven to be quite accurate in years past. On that list were two new sizes for the Quai d’Orsay line, Alma (5 3/10 x 54) and Gourmet (4 1/3 x 50).

Then in November, SEITA, the distributor of the brand in France, released pictures of its latest Edición Regional cigar, the Quai d’Orsay Secreto Cubano. That cigar just happened to be wearing a brand new and much shinier band than what the line had worn previously. That updated look would be the first glance of what some big news to come for the marca,  heralded as “a change that is being undertaken to help bring a new level of premium association to the brand while enhancing the Cuban origin of the cigar.”

At the start of February, Habanos S.A. began confirming tidbits of information about its upcoming releases, the first of which was that the H. Upmann marca would be getting its first Gran Reserva release by was of the famed Sir Winston vitola, a 7 x 47 Churchill. Contained in that announcement was news that the Quai d’Orsay brand would be featured during the Festival, something that might seem odd for a marca that was effectively limited to France, but the cigar conglomerate said that the brand would have “a promising new stage from this Festival on.” 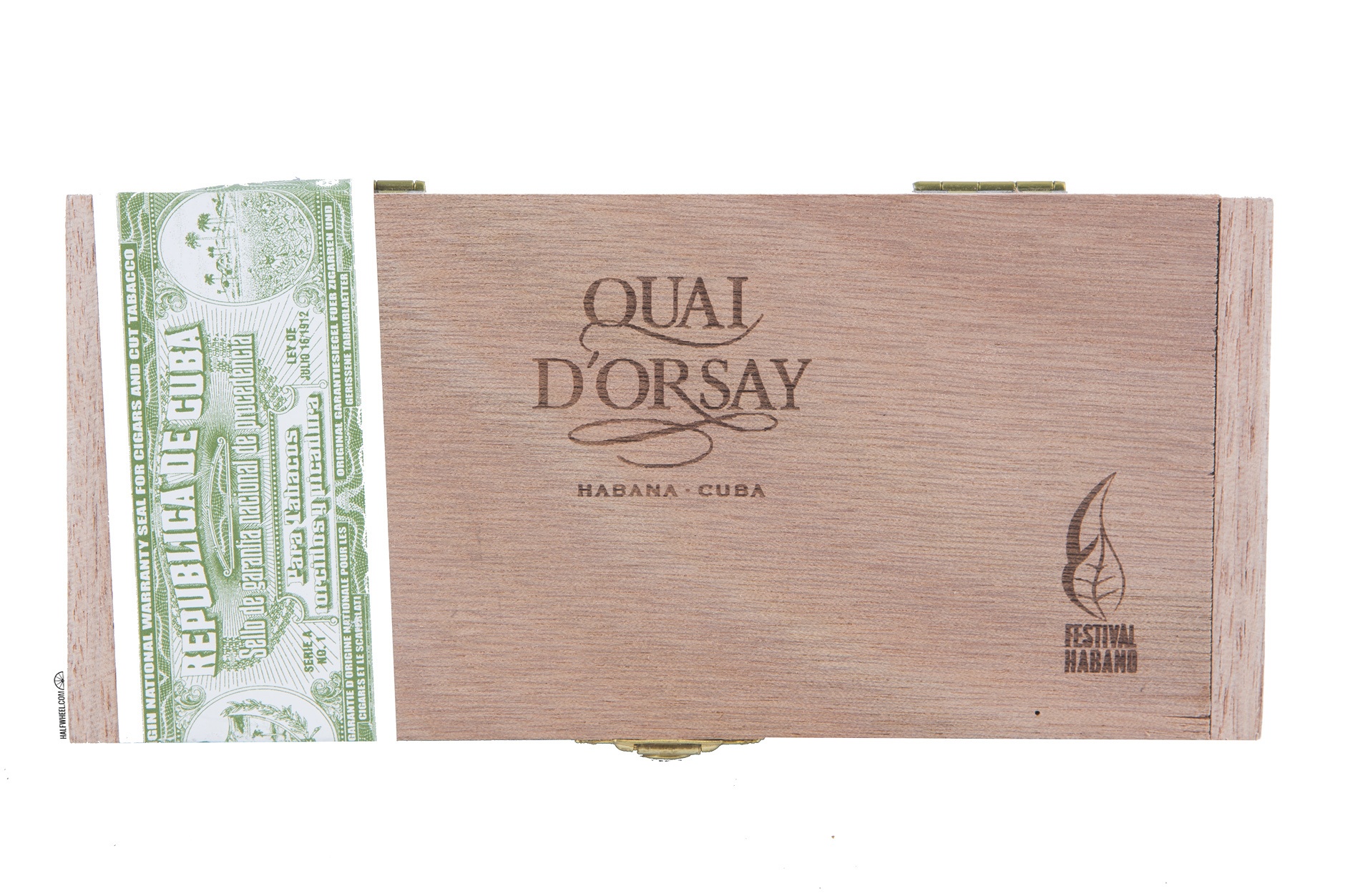 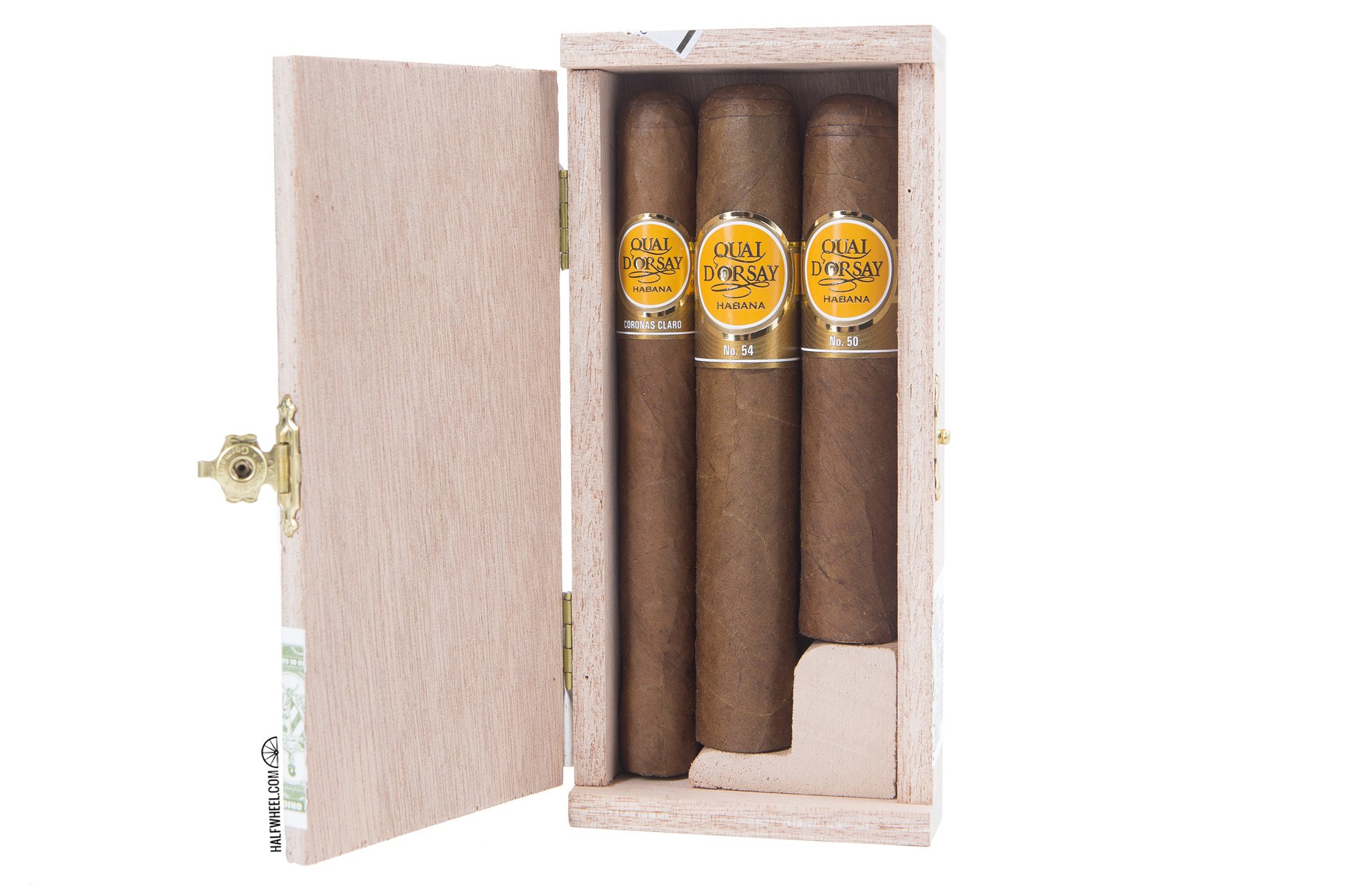 Indeed, just as the Festival del Habano XIX was kicking off at the end of February 2017, Habanos S.A. unveiled the new releases, though with new names, as the Alma became the No. 54 and the Gourmet became the No. 50. Additionally, it was announced that the Coronas Claro would be sticking around and getting the updated bands as well, while the trio of cigars would be getting international distribution to major Habanos S.A. markets. 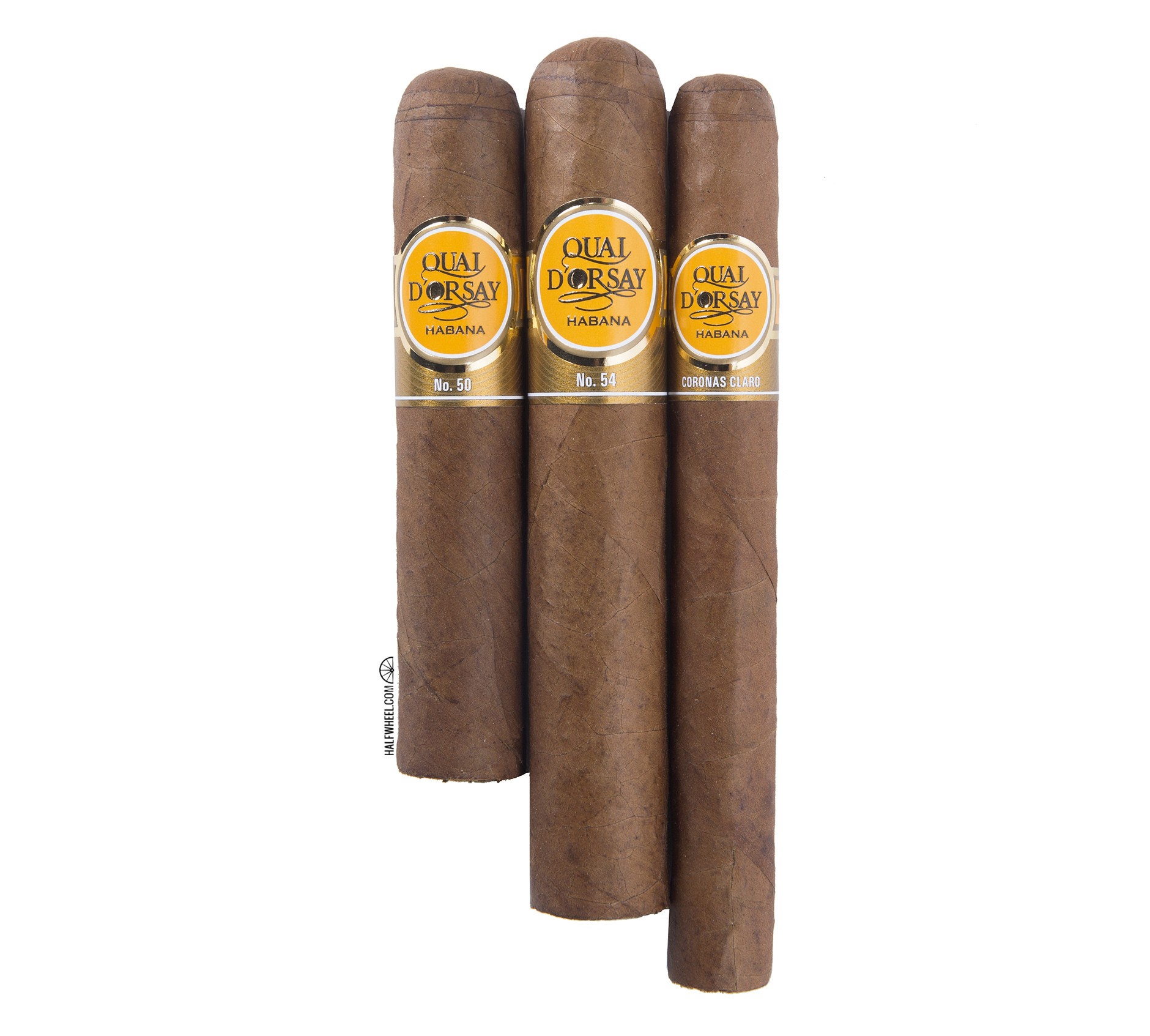 One term that wasn’t used during all of this talk, however, was re-blend. The cigar doesn’t appear to have been tweaked as far as its components are concerned, though only smoking it will truly tell. 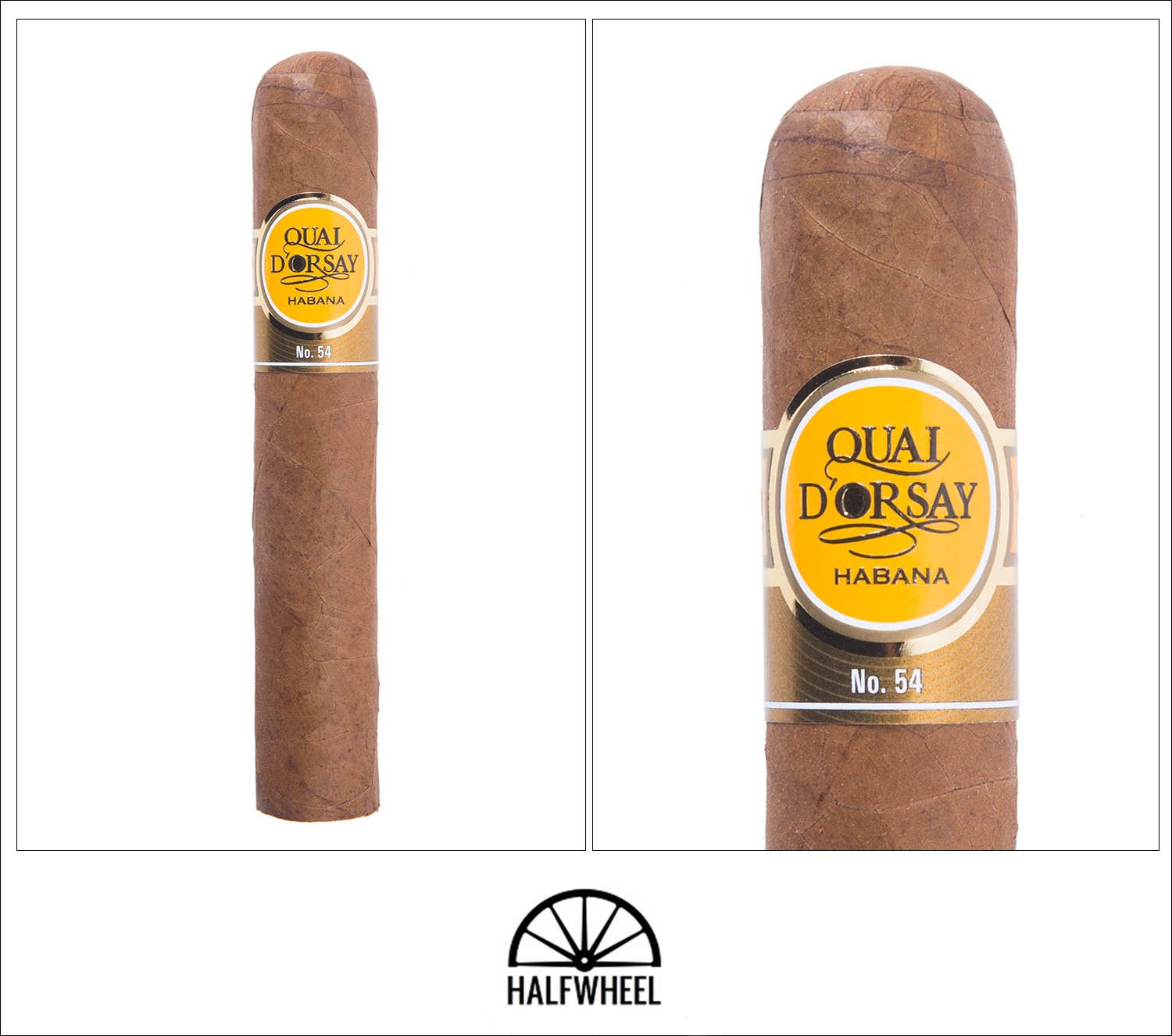 If you’re familiar with the Quai d’Orsay brand, there’s no mistaking the updated band that this cigar wears. While the previous version was flat, matte and made of fairly thin paper, this new version is bright, bold, shiny and feels a bit thicker. The wrapper doesn’t have much oil or shine to it and its pecan color shows a bit of variance, particularly along the edges of the wrapper and the seam lines of the cigar. The vein structure doesn’t appear to be as traditionally Cuban as I would have imagined, lacking the pinched and puckered look found on other leaves. The firmness of the two samples varies quite a bit: the first sample is firm while the second is a bit softer. Both appear to be well-rolled, however, and each sports a well-crafted triple cap. The foot of the cigar offers a primarily neutral aroma that falls between a light, generic tobacco smell and packaged bread, though one sample had a bit of apple and floral sweetness. The cold draw varies from near perfect to firm and offers an interesting initial flavor of generic gum, with touches of wood and pepper in the background.

The Quai d’Orsay No. 54 opens with a young and bread-driven flavor, and while the tobacco isn’t harsh per se, it certainly has some of the less-rounded characteristics of being youthful. Pepper doesn’t become much of a factor in the cigar until the first clump of ash drops off, though it gets started a bit earlier in the second sample, and even then it is quite tame yet not so much as to make its appearance go unnoticed. There’s a good bit of white pepper through the nose, while the tongue gets more toast and light woods, and retrohales are certainly needed to experience the full scope of the cigar. The draw and burn have both been fairly good in this opening third, with the first sample needing a relight only when I pushed it to see how long it would stay lit without me taking a puff. This cigar does seem to burn just a bit quicker than average, or at least what I was expecting. There’s a good amount of black pepper starting to emerge at the start of the second third, as retrohales are more substantive and begin developing some real character. Whereas the first third was a walk-through, this is more actual performance, as flavors begin to emerge, if a bit reluctantly. There’s a bit of creamy coffee in the profile at the midpoint, enough to have me thinking of pouring a cup as a pairing experiment, while the pepper seems to be best experienced through the nose and is restrained enough to allow for frequent retrohales. The woodiness of the cigar has taken over most of the palate, a fairly linear but still enjoyable flavor that sets a good base for the pepper. The burn rate has also slowed quite a bit, with each puff a bit more labored than ones previously. 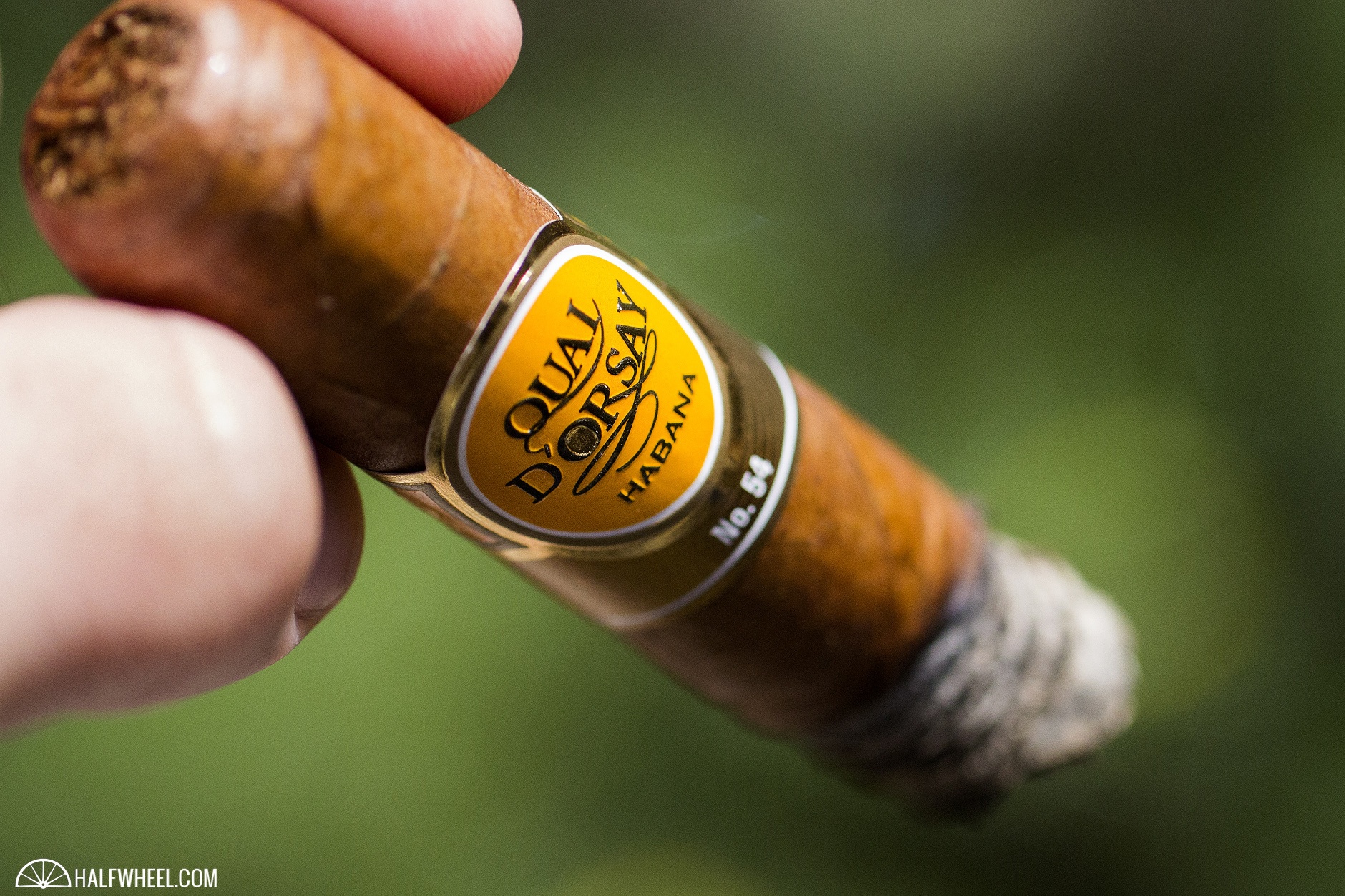 If there is one thought that has planted itself in my head as the final third gets underway, it’s that this revamped Quai d’Orsay blend doesn’t taste like the majority of cigars I’ve had from Cuba. Black pepper keeps active in the nose and retrohales become a bit more stinging on the finish, though not enough to be off-putting. The underlying flavor profile hasn’t changed much since the start, though it is markedly more intense, sitting at medium-plus now as opposed to the medium body level it started at. There’s a bit of strength beginning to be felt as well, though it too is on the milder side of the spectrum, as this cigar is far from being a gut punch. Combustion becomes much more temperamental in the final third, as the first sample takes every opportunity it can find to go out, which in turn requires either a much faster rate of smoking or frequent relights. After the third, it’s time to call the first cigar a wrap even with a bit more than an inch left to smoke, while the second was able to be smoked a bit farther down without much appreciable change in the profile. These reviews have been labeled as “preproduction” because there is likely to be a significant gap between when the cigars are reviewed and when they shipped. For reference, some cigars from last year’s Festival have still not been released. — Charlie Minato.

When reviewing a preproduction cigar from Habanos S.A., one has to keep in mind that this was released at the biggest event on the company’s calendar and that what ends up on retail shelves could vary from these sticks. That said, I’m quite impressed by the Quai D’Orsay No. 54, as it’s a bit fuller and more robust than what I recall from the brand, though still shows promise of delivering the more subtle and refined notes that I associate with the marca, albeit might take a bit of rest to get there. That all said, I’m impressed by the thicker of the new additions and intrigued to try the No. 50 to see how it compares. Even more, I’d love to do a side-by-side smoking of the three sizes for a more in-depth comparison. While this line hasn’t been a total secret up to this point, I’m inclined to think what remaining bit of the secret will soon be out once more places in the world have ready access to this line.