My Wednesday of Procigar 2016 was supposed to begin with a trip to General Cigar Dominicana.

Last year, I woke up ill on Wednesday imorning and spent almost 24 hours in the hotel being sick while the rest of Procigar did their thing. It wasn’t fun under any accord, but it also meant that I knew I was going to get to General this year. Turns out, I probably need to go again.

We left on time and made it to General relatively on time. General is located in the free-trade zone, albeit not the newer one. It’s an almost hodgepodge of factories connected by various hallways including two different premium cigar rolling operations and a machine made business, along with tobacco processing, executive offices and packaging.

Our morning started with coffee, cigars and a brief presentation about General Cigar Dominicana and its parent company, Scandinavian Tobacco Group (STG). Much of it sounded familiar from other factories, three things stood out. STG employs just under 4,000 full-time employees between its operations in the Dominican Republic, Honduras and Nicaragua. It also claims to be the only company operating in all three, something that seems to be true so long as you restrict it to rolling: they are the only company with factories in each to my knowledge. In addition, the company talked about its social programs, many of which seemed similar to other companies. Something I found unique was that it has an in-house company-run loan operation for its employees. Since it has started the company has loaned $580,000 to its employees with just a 2 percent interest rate. My day then took a diversion. I wanted to meet with Niels Frederiksen, ceo of STG, and Régis Broersma, the new president of General Cigar Co. While Broersma took over the General job in mid-November, Frederiksen has been in his role for around a year. And it’s not like there haven’t been other changes, as earlier this month, STG went public.

I sat down with Frederiksen for a while and we talked about his plans for the company not only from a broad perspective, but even at a micro-level. I started with the IPO. One thing that was a bit surprising about the public offering was that Swedish Match is retaining part of its ownership, reducing from 49 percent to anywhere between 29-31.2 percent of the company depending on whether an option is exercised in the coming weeks.

Many believed that Swedish Match would sell its stake entirely with the IPO, but Frederiksen explained that the IPO gave Swedish Match, and the other partner Skandinavisk Holding II A/S, flexibility. It’s worth nothing that going public would be a major deal for any cigar company, STG is probably the one it would affect the least given that Swedish Match is already public meaning that much of the company’s performance is public and the company already had to, at the very least indirectly, be concerned with stock price.

I asked Frederiksen what he thinks the most successful programs or products of his tenure has been and he led with CAO—something on which I actually agree with him. When CAO was merged into the General portfolio in late 2011, the general talk amongst retailers and consumers was that General was going to ruin it. While it’s not the same CAO, it has found its place and seems to be a brand that General has figured out to a large part.

We were shortly joined by Broersma and Craig Reynolds, the new evp of global handmade cigar businesses for STG.

I asked Reynolds the same question, and he told me inventory.

Reynolds is of course the head of Cigars International, the retailer owned by STG. He was promoted in mid-November alongside Broersma and it’s clear that the three people that were sitting in the room with me have plans for General, starting with Frederiksen letting Broersma and Reynolds run the business the way they think it’s best.

While the three agreed there is no planned day for the company to introduce a new General, there are going to be changes. Chief amongst them, General is going to be more nimble. All three griped about how long it took for product development at a company as large and resource rich as General. Both Frederiksen and Reynolds admitted that the company has missed opportunities in both the U.S. and Europe because it has not been able to put the products out quickly, but it’s clear Frederiksen has larger plans. He wants General to innovate, even if it means occasionally failing.

Another point of focus was that the company is going to invest in its relationship with retailers whether it be through better margins, promotions or events. When I asked the room what they wanted General to be known for, Reynolds responded like he was shot out of a cannon: a company with products people want.

If you are getting to this point of the post and wondering where the pictures are—it’s a good question. After wrapping up the lengthy chat we all headed to lunch where the rest of the group was. From what I know, there were two different tours: one that included a blending session, another that included a rolling session. There also was a tour, a tour that I had completely missed.

Another General team member was showing some other people around after lunch and offered to let me join the tour, which I did. He requested I not take pictures, something that doesn’t appear to be the company’s official policy, but as such, there are no pictures.

The General factory deserves its own post—or three. It’s truly an impressively large and diverse place. One thing that seems incredibly unique at General is that some of the factory is considered El Credito: a traditional one roller and one buncher pair. The rest of the factory operates with one buncher and two rollers in teams, something I can’t recall seeing elsewhere. So while there are 600 total people bunching and rolling cigars, there’s not 300 pairs.

At 2 p.m. we left General for the hotel. One great thing about Procigar is that the tours end relatively early some days meaning you could get rest. Or you could sit down for a press conference. 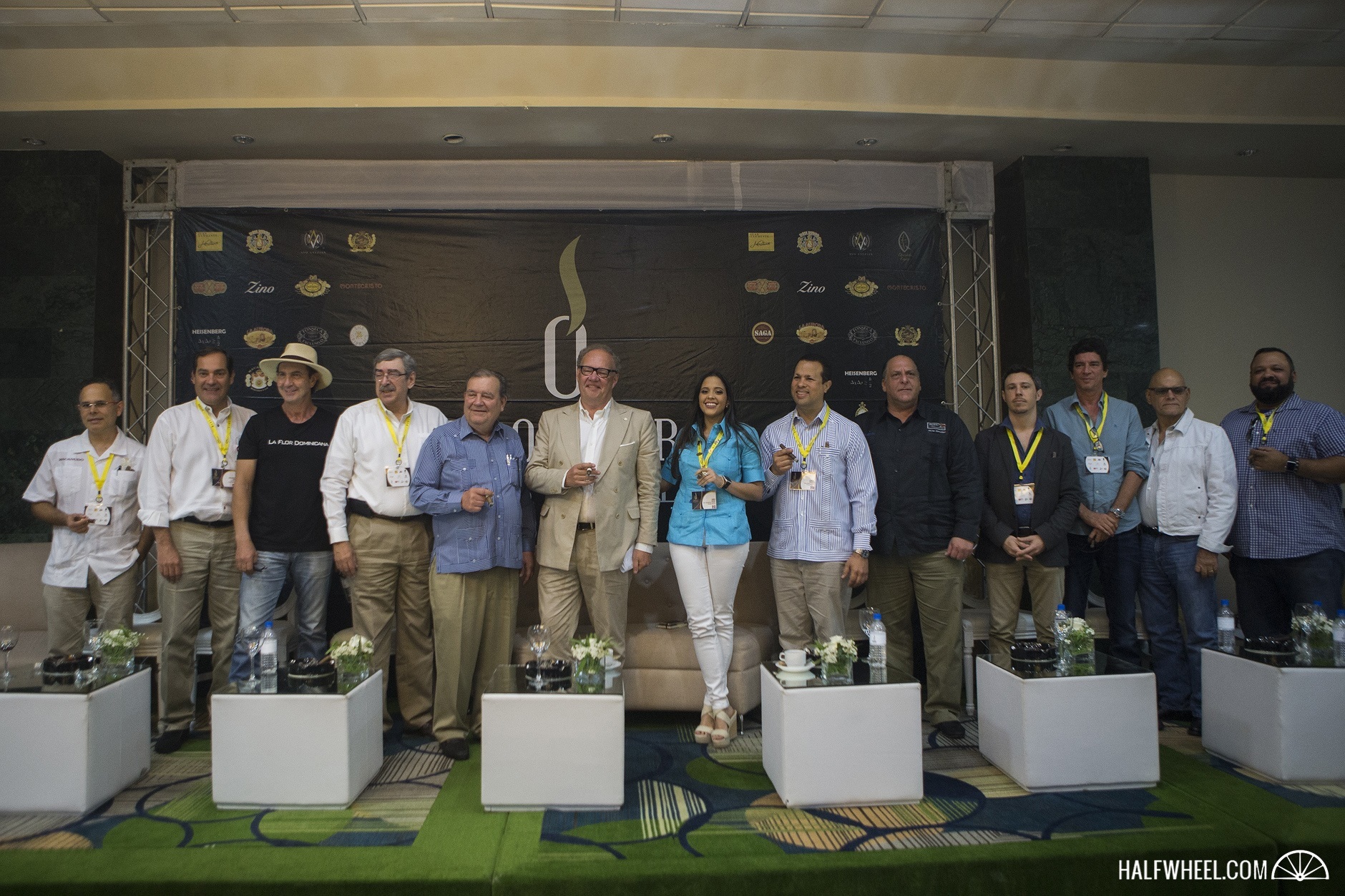 There were no earthquakes like last year, but there were familiar faces on a familiar stage—plus one. Abe Flores of PDR Cigars is the newest member of Procigar and joined the group of factory owners and managers on stage. As there has been in Cuba and Nicaragua, rain has affected tobacco growing this year in the Dominican Republic. Nirka Reyes spoke briefly about the positive and negatives of a dry season. The good news is that little rain is better than too much rain and the better news is that most of the farms of Procigar members are irrigated which means that they don’t depend on rain to water the crops; the bad news is that some farmers–the ones without irrigation systems–lost a lot. The diversity of the Dominican Republic’s tobacco growing areas mean that some farmers were able to experience very little challenges while others were severely impacted. Reyes told me that the group estimated that up to 20 percent of the tobacco crop could be lost this year, but that much of that number affects cheaper filler for machine made cigars and other less expensive uses. Furthermore, the dry season means that much of the tobacco that grew successfully would be more nutrient-rich than typical years.

I was a bit taken back by how positive the message regarding the country potentially losing 20 percent of its tobacco harvest was delivered and a follow-up question didn’t seem to clear up the matter much better; although a few more follow-ups did. Climate change in the tobacco industry is real. Cuba, the Dominican Republic and Nicaragua all experience uniquely dry periods for this crop, fortunately for the latter two, it was not followed by tons of rain like in the former.

Another moment of intrigue was when a question regarding production numbers compared to other countries was brought up. The numbers seem to be getting closer, although there’s a disagreement between the Dominicans and Nicaraguans, since the Dominican Republic classifies handmade cigars differently than how Nicaragua classifies premium cigars. The Dominicans claim that the estimated number of premium handmades from the Dominican is lower than the real number, while the Nicaraguans argue the opposite. Whatever the case, this debate is becoming a bit more contentious each year as the gap reduces. Next up, I ventured across the hall to watch a longest ash contest. It’s worth nothing that while Procigar is most certainly the older brother to Puro Sabor, Nicaragua’s cigar festival, it’s not that old. This is the ninth festival. It’s nice to see the organization continuing to try to change things up and add more events. Or at least it sounds good on paper. Whoever decided to have a longest ash contest with a La Flor Dominicana La Nox was mean. How mean? The first and fifth place competitors—along with one or two others—vomited during the competition. Remarkably, all of them managed to keep their ash intact as they were throwing up. And then they kept smoking. What were these people getting nicotine sick for? First place received a free registration to next year’s Procigar, which seems worth it. Admittedly, the box of cigars that second place received seemed a bit cruel, although not as cruel as the third place ashtray. The event was fun, but watching multiple adult men throwing up in a room together seemed a bit odd. This year, the order of the dinners were switched around from last year, as the traditional Dominican night was held on Wednesday instead of the White Dinner. Also, it was moved to a new venue, Gran Teatro Del Cibao. The theater played host to a first ever event where the Dominican government recognized a variety of factories, people and charities for their contributions to the Dominican society. It was followed by a few performances, one of which I was extremely impressed with despite my hunger.

Afterwards we moved outside to a pavilion for the dinner and dance. The pavilion this year is said to be nearly twice as large as where this event was held last year and it was more than needed. While there were more people, there was actually room to walk around. Unfortunately, a lot of people left quickly given how late dinner started, but I enjoyed the event as much as last years.

As with every night in Santiago, a box of cigars was presented at dinner. This box was said to include cigars that had not been released before—some of which were the special La Flor Dominicana and Davidoff Diplomat Edition—others seem to have hit shelves. As always, the physical box itself was almost as interesting as to what cigars were included.

At 11:30 p.m. I headed back to the hotel to finish up this post, which is now much longer than intended. Good news: Patrick is in charge of tomorrow’s post.