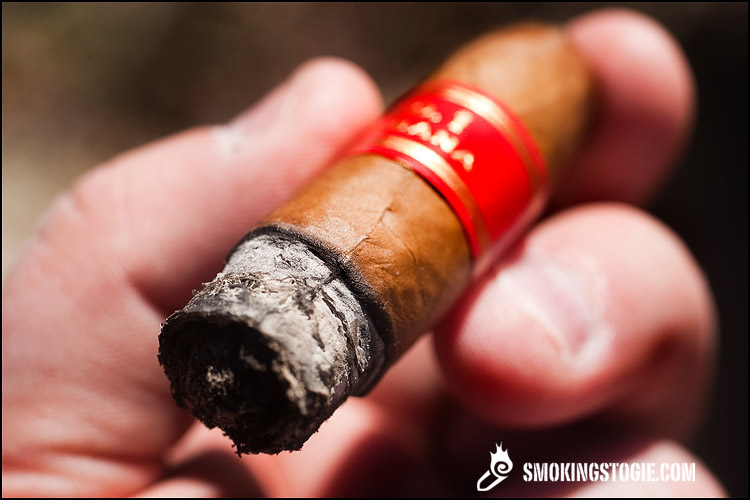 In 2006, Habanos S.A. started a new series of releases of various brands and vitolas, released primarily for sale in Duty Free and Travel Retail stores around the world. Every year, it releases a special product for the stores. So far, it’s largely been specific to one brand—with the exception of 2008—and usually a special packaging option.

To date, there have been five releases:

While the other four releases have been in travel humidors, the Partagás Serie P No.1 was packed in arguably the exact opposite thing, a jar. It’s absolutely beautiful, made from bone China porcelain with a humidifier on top and 25 cigars inside.

When I was at the LCDH Playa Del Carmen, I saw a jar. The cigar itself is a excellent example of a cigar with a light brown wrapper that has a bit of oil on it and a vein or two. It is fairly small and the wrapper smells like a combination of hay, wood, pepper and chocolate. It is great when squeezed, not too hard, not too soft, with just the right amount of give. Just by looking at it, the Partagás seems to be extremely well-rolled,

The first third starts off with a small amount of spice and a wonderful opening, with flavors of wood, sweet chocolate, hay and a bit of coffee. The spice and the creaminess are great together, and make for a very rich profile, one of the best openings I have had in a while. The second third has the spice from the first third die down quite a bit, although still in the background. Flavors are close to the same as the first third, but with the coffee notes taking center stage and more woodiness. The spice is just enough to compliment the rest of the flavors. The only downside is a bit of bitterness, but nothing strong enough to be anything other than just noticeable.

The final third again has coffee and hay, but also a bit of nuttiness, tart and sweet— all at once. It never gets harsh, and I enjoy it all the way to the nub. To me, these are some of the most balanced Cuban cigars I have had in a long time. While not the most complex profile, the flavors that are present are rich and delicious. Pair that with the incredible construction, this cigar is a must try. The only negative I can think of is the price, which is truly outrageous for the small vitola, However, if they are sold these in boxes, presumably at a lower price, I would buy them by the pallet. Just a great cigar that everyone should try at least once.