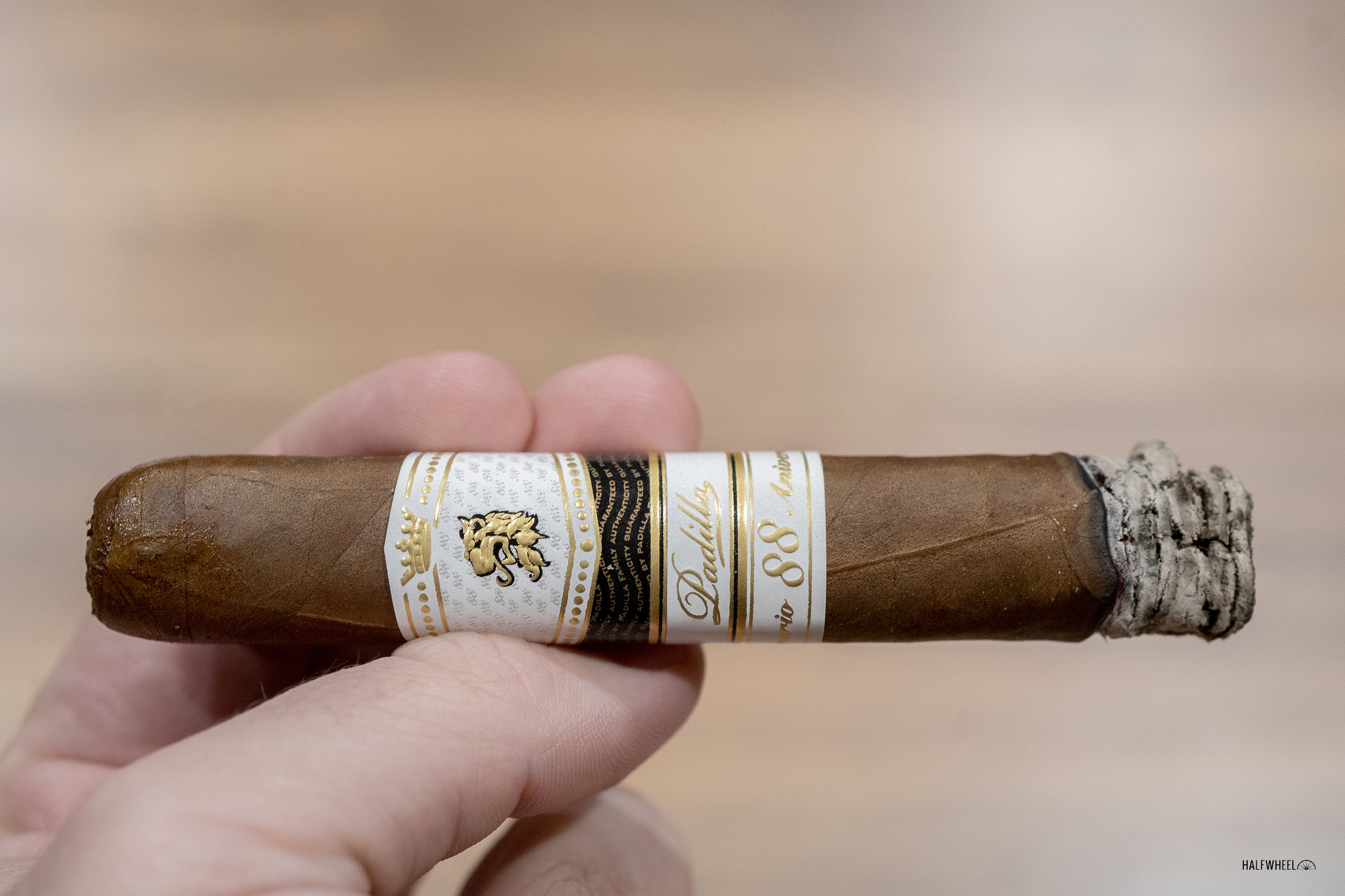 Throughout his cigar-making career, Ernesto Padilla has had a couple of consistent influences, most notably the city of Miami and his father, Heberto.

Born in 1932, Heberto Padilla was a noted Cuban poet and critic of the Castro regime, and it was that criticism led to his imprisonment in 1971. While he initially supported the Revolution, he changed his opinion of it as the place of the writer in Cuban society changed, going from being heralded for their cultural and creative contributions to being criticized and even banned by the government. Many were seen as being divisive to society while not adhering to the true principles of communism and socialism.

Padilla’s imprisonment was criticized by numerous well-known writers, including Susan Sontag and Jean-Paul Sartre, and even became known as “the Padilla affair.” While he was eventually released from prison after 37 days, he was forced to remain in the country until 1980. He eventually left Cuba, spending time in New York, Washington, D.C., and Madrid before settling in Princeton, N.J. He then moved to the Columbus, Ga. area as he was teaching at Columbus State University. Sadly, he died on Sept. 25, 2000.

The year 2020 would have marked the 88th birthday of Heberto Padilla, and what gives this cigar its name. Ernesto Padilla said that while it does not use the 1932 name, it is considered to be part of the Padilla 1932 series.

The blend uses a high priming Ecuadorian habano wrapper over a double binder of Nicaraguan criollo and corojo leaves, and Nicaraguan fillers grown by AJ Fernandez that includes corojo, criollo and pelo de oro, according to Padilla. The line is being made at Tabacalera AJ Fernandez Cigars de Nicaragua S.A. in Estelí.

Padilla released 100 five-packs of the robusto vitola via his website in January, with the line scheduled to get its full release in March via retail stores. When that happens, the line will also be released in a 6 x 52 toro size and a 6 x 60 figurado vitola. The MSRPs are slated to be between $12-$15 per cigar before taxes. Given the extensive design work that Padilla has put into his previous releases, I’m almost more intrigued by the bands on the Padilla 88 Anniversario than the cigar, at least from a visual perspective. The band is a bit subdued but still clean and classy, and you might want to have your reading glasses or a magnifying glass to see the incredibly small details in the band. The cigar is rolled and pressed quite nicely, albeit a bit firmer than the average box press which tends to feel like a very firm pillow. The wrapper has a very evenly colored, nutty brown wrapper with the occasional hue that reminds me of a light-colored chocolate. What veins the wrapper does have are small and unobtrusive, while the seams generally lie flat and are only slightly visible. The foot offers an aroma that has me first thinking of a freshly opened bag of brown sugar, though it’s not overly sweet. It also gets quickly pushed out of the way by dry tobacco, woods that range from generic shelving to fresh-cut firewood, and then some whole peanuts, varying amounts of pepper and a very subtle suggestion of chocolate. The cold draw is smooth and maybe just a tick open but not concerning, while the flavor immediately imparts a tingle on the lips. There’s more woodiness, more peanut and a much more pronounced mouth-drying sensation. One sample also has the kind of dry powder sensation of cocoa powder being sprinkled on a dessert or beverage.

The Padilla 88 Aniversario Robusto starts off with a lot more of the dry wood and a bit of pepper, but the peanut note has turned into a peanut butter flavor and aroma. The first retrohale is quite peppery and it comes across a bit hot as well. But overall the first few puffs are quite enjoyable and offering some of the more familiar flavors and aroma of Ecuadorian habano tobacco. There’s a good lingering tingle in the nose, even without a retrohale. In particular, one cigar continues to give me the feeling of cocoa powder appearing on the palate, that light, slightly sweet and definitely powdery. One of the three samples sees the pepper get just a bit out of step on the palate, resulting in a bit of harshness and irritation that takes away from the otherwise very good balance the cigar exhibits. Construction is ideal with an even burn line, good burn and decent smoke production. Flavor is a vibrant medium-plus, body is medium, and strength is medium at best thus far.

The second third dials back the wood and pepper a bit, though I still get a good amount of pepper through the nose and the wood makes occasional appearances with a charred finish. I am also getting a mild but consistent peanut butter undertone at times, which is a very familiar and palate-friendly flavor that is a welcomed addition to the profile. There’s not much to complain about as the Padilla 88 Aniversario Robusto makes its way through the second third, though at the same time other than the pepper, most of the flavors have dialed themselves back to the point where there’s not a ton about which to write. It’s a solid medium to medium-plus flavor and body through the midpoint and I certainly feel like I’m getting a decent amount of flavor with each puff. Yet just like a plain bagel offers a good amount of flavor, it’s not exactly the most vibrant thing I’ve ever tasted. The back half of the second third picks up some creaminess, more in the texture of the smoke than the flavor, but not exclusively. When combined with the flavor, there is a bit of a hazelnut creamer undertone, while the now primarily white pepper keeps the front of the tongue-tingling. There is also more pepper emerging and even when I don’t retrohale, the bit of smoke that wafts up into my nose gives it a good tingle. Flavor is still a very enjoyable medium to medium-plus, body is medium-full and strength is medium-plus. Construction remains fantastic with no problems, unless you feel compelled to maintain a perfectly even burn line and touch the edges up when they get just a bit uneven. 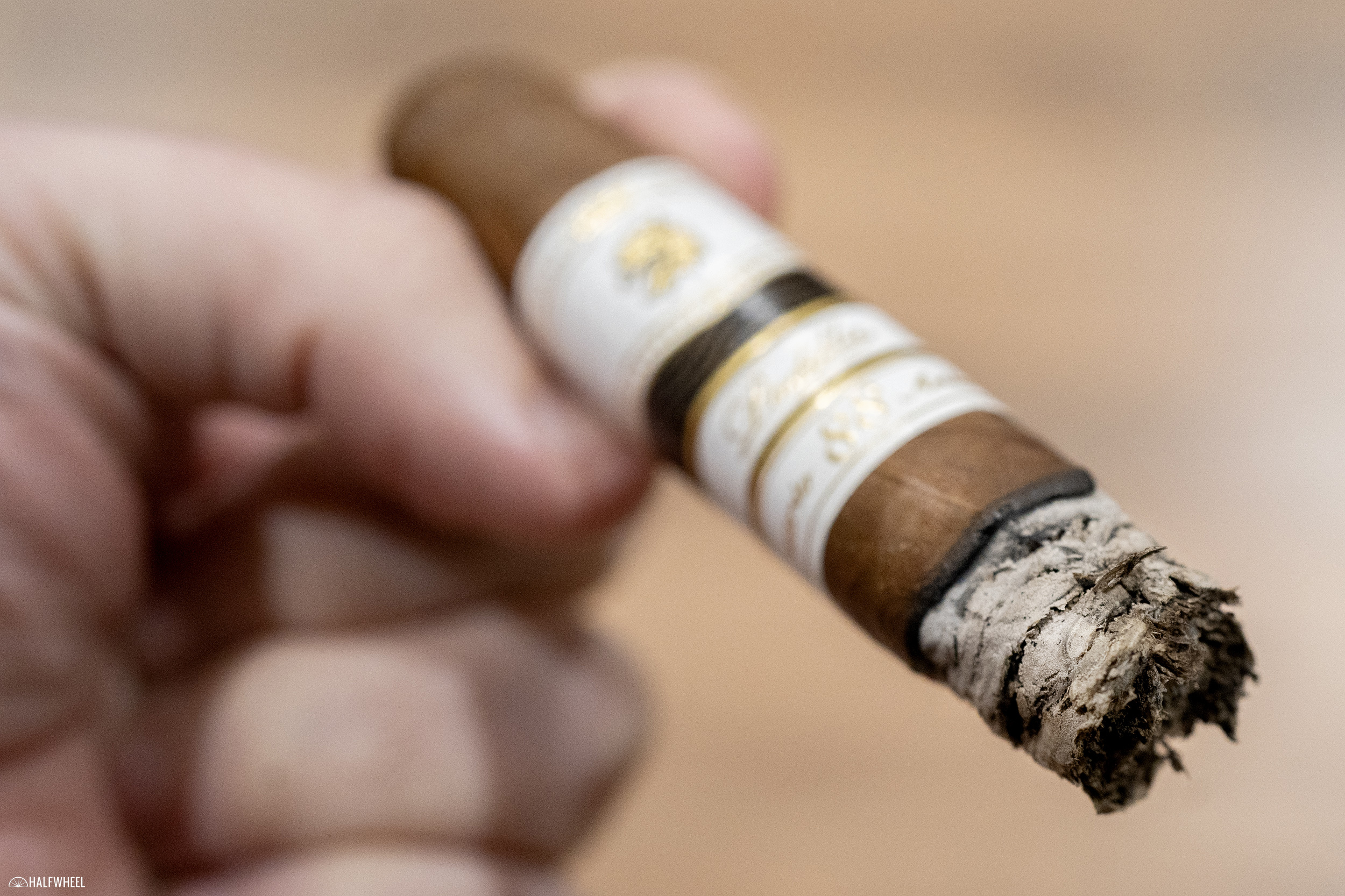 The final third of the Padilla 88 Aniversario Robusto continues a gradual mellowing of the cigar, despite the white pepper still being fairly active in the profile. There’s a bit of char to the wood, minimal amounts of dry earth, almost none of the nuttiness or peanut butter from earlier, and from a physical perspective there is a bit of slight scratch delivered to the top of the throat. As the final two or so inches get underway, there’s a distinct change in the texture. It gets a bit more powdery, but it’s not the cocoa powder from earlier. It’s a harder flavor to pin down, almost a bit like the taste of Honduran terroir found in less aged tobaccos from that region. I must give the retrohales their proper due as they stay consistent from start to finish and continue to offer just the right amount of peppery kick and brightness. There’s also a bit of earthiness to be found in the final third, furthering the firm foundation of flavor that the cigar has shown since being lit up. Flavor finishes medium-full, body is right there as well, and strength settles closer to medium. Construction remains fantastic and absolutely free of any problems. While we can argue about how Padilla's cigars sell in stores, I can say that for the most part I have liked the company's blends, and the Padilla 88 Aniversario Robusto is no exception. The cigar shows impressive flavors and balance, with about as on-point of a retrohale as I can recall in recent memory. There are points, specifically in the second third, where I want the cigar to offer more as I think some more standout flavors would only help the overall impression. Yet the cigar is perfectly enjoyable as is, a worthy pickup if you're looking for something that delivers some familiar Ecuadorian habano flavors with a firm Nicaraguan backbone of flavor. Construction is nearly impeccable, which only further enhances the smoking experience. While I'm not at the point of recommending filling your humidor with these, I certainly think at least a few would be more than a welcomed addition to any collection.