It’s March, which for any fan of the AVO brand means there should be a birthday cigar coming along. Only there isn’t.

Each year, since 2001, AVO has released a limited edition cigar made for Avo Uvezian’s birthday, which takes place on March 22. As part of the AVO rebrand that launched earlier this year, Davidoff of Geneva tried to slim down the AVO portfolio—cutting it in half—and as such there won’t be a birthday cigar this year.

As I was going through my growing box of cigars to redux, I remembered it was March and that I had been interested in seeing how the AVO 88 would age. Here’s what I wrote last April:

This was not the cleanest cigar I’ve smoked from Davidoff of late. While I really enjoyed a lot of the flavor, there was a detail that just was not there in the four samples I smoked, particularly given how great some Davidoff-made cigars have been lately. I think with maybe a bit of rest—perhaps as little as a few weeks—the cigar will overcome this, I just hope that it happens before the strength disappears. I was really impressed in the balance that was at play between the strength and flavor, something where the latter normally dominates the former in the case of Eladio Diaz and Henke Kelner, with the AVO 88—Davidoff reminded us it can make a pretty full cigar without using its Honduran factory. It’s a good cigar, not legendary like the AVO 22, but I think we haven’t seen the best from this cigar.

The one good news is that last year’s release of the AVO 88 was quite large—140,000 cigars—and the cigar is still somewhat available.

I honestly forgot these cigars were packaged in cellophane, which fortunately provides a more intense aroma after a year of sitting in a box surrounded by lots of Viajes. There’s sweet leather and a lot of barnyard from the wrapper with nuttiness, cocoa, leather and some dried cranberry coming from the foot. I’m a bit concerned given there’s some harshness in the cold draw, something I struggled with when I first smoked the cigar. In addition, there’s a big oatmeal, peanuts, dried cranberry and sourdough bread.

Upon lighting, I get walnut shells, leather, meatiness and cranberry. I don’t believe that I would peg this as a Dominican puro after the first few puffs. After a few puffs, things get going. There’s citrus, leather, crushed peanuts with meatiness in the back. It reminds me of burnt hot dog skin. at the midway point, the nuttiness picks up alongside a salty sunflower seed note. There’s also leather, earth and unfortunately—a growing harshness. By the final third of the AVO 88, the harshness has picked up dramatically, enough so that it becomes a prominent flavor. 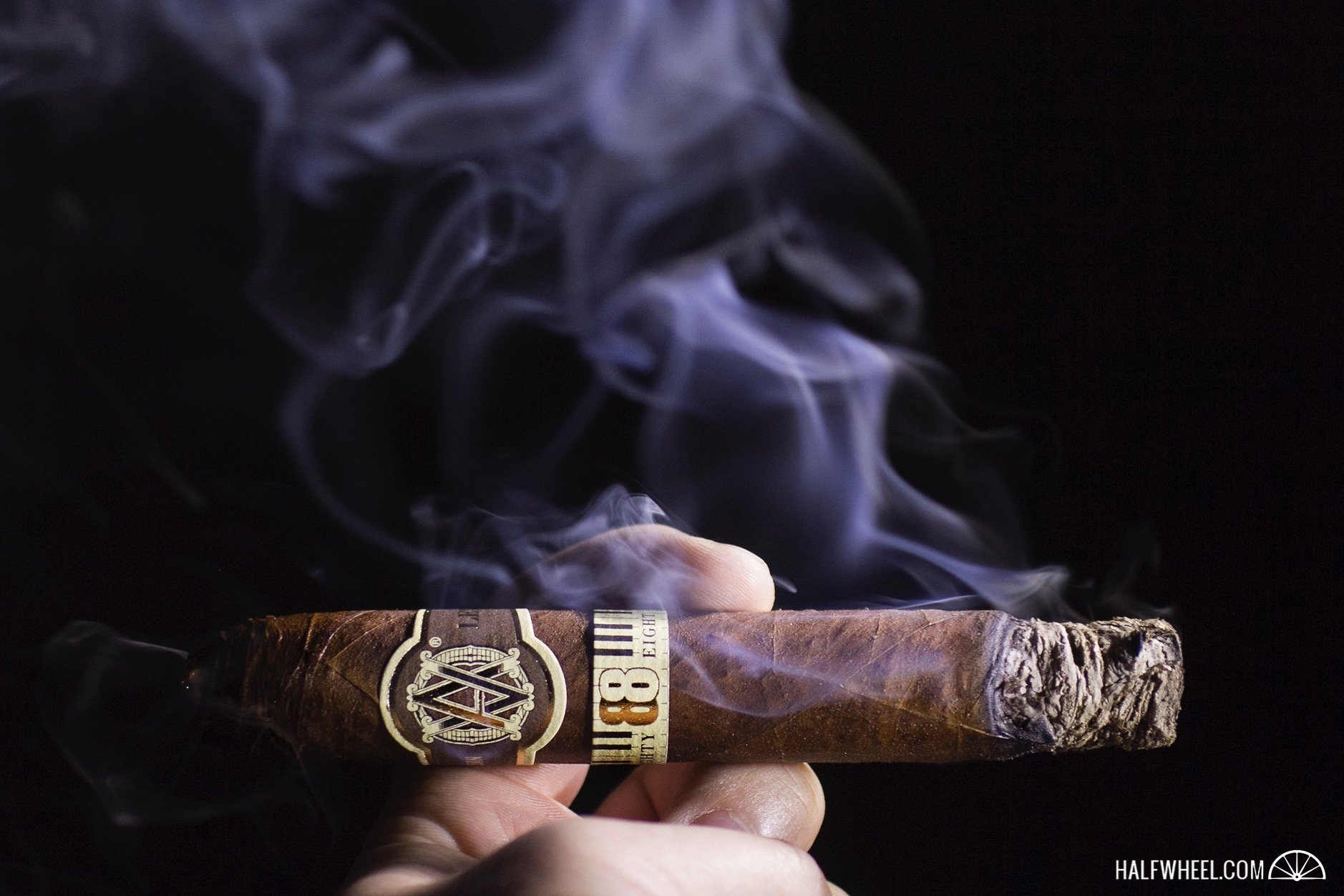 I found the draw to be somewhat tight on the AVO 88, but I imagine that was due to a conservative cut on my end. Smoke production starts average, picks up dramatically after the first third, but peaks and recedes a bit on the final third. I touch up the AVO 88 at around the final third, but the burn was otherwise fine. As for the strength, it begins medium-plus and picks up a bit to medium-full by the final third.

Site sponsors JR Cigar and Serious Cigars have the AVO 88 in stock. Disclosure: AVO advertises on halfwheel and the cigars for this review were sent to halfwheel by AVO.

When I first smoked the AVO 88, I loved the balance between the strength, body and flavor. It was a full-bodied and stronger take on AVO, but there was one thing that irked me: the harshness. I thought that some time could calm down the harshness. But there was a concern about letting the cigar rest: it could lose some of the strength that made that balance so wonderfully. Both happened and for me, I’m not as impressed with the cigar than when it was fresh. It’s still got a great array of flavors, good construction and an interesting balance, but I’d trade a bit of harshness for a bit more strength.