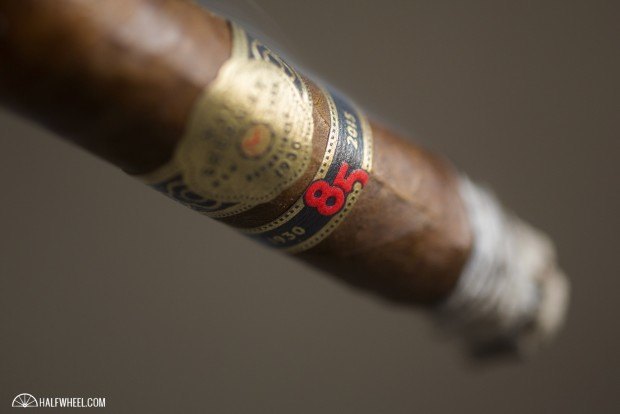 Nat Sherman is arguably the quintessential luxury American tobacco company. It is not only a family run company, but its reach goes far beyond just premium cigars. There is the iconic Nat Sherman Townhouse, a retail store in the heart of Manhattan, an accessories business and premium cigarettes, which the company produces in North Carolina.

The company started in 1930 with a store on 1400 Broadway, a location where it remained until 1977. Nat Sherman started the company as a retail store, but through the decades it expanded with the aforementioned businesses, as well as others, like distributing the Bolívar brand prior to Cuban embargo. 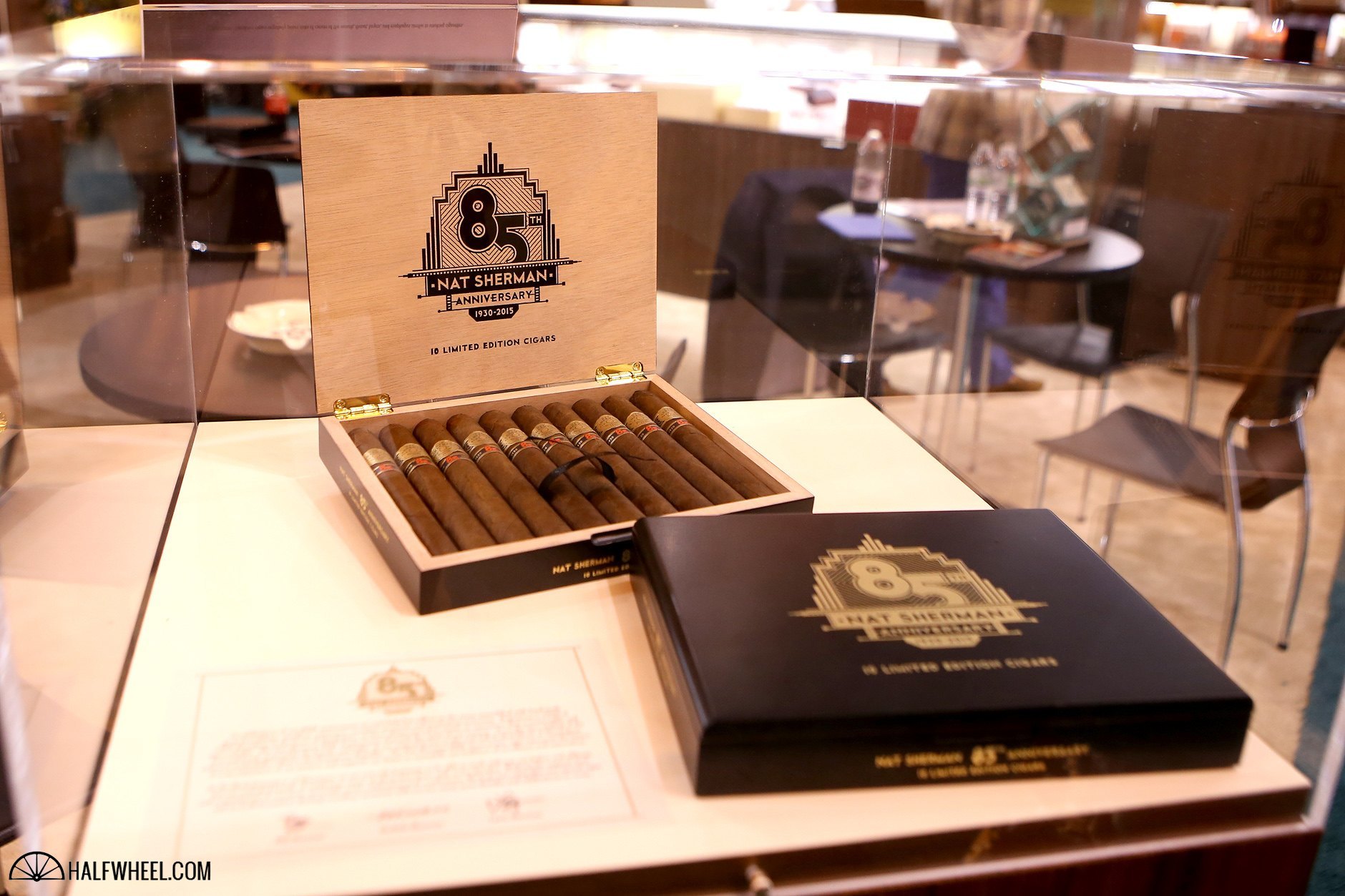 This year marks the 85th anniversary of Nat Sherman and the company is celebrating in style with a 6 1/2 x 54 toro extra produced by the Quesada family in the Dominican Republic. The cigar uses Dominican tobacco for the wrapper and binder and fillers from Nicaragua.

It launched in June at an event at Blend Bar Cigar in Indianapolis, Ind. and shipped to retailers shortly thereafter. The Nat Sherman 85th Anniversary is limited to 2,500 boxes of 10 with suggested retail pricing at $19 per cigar. 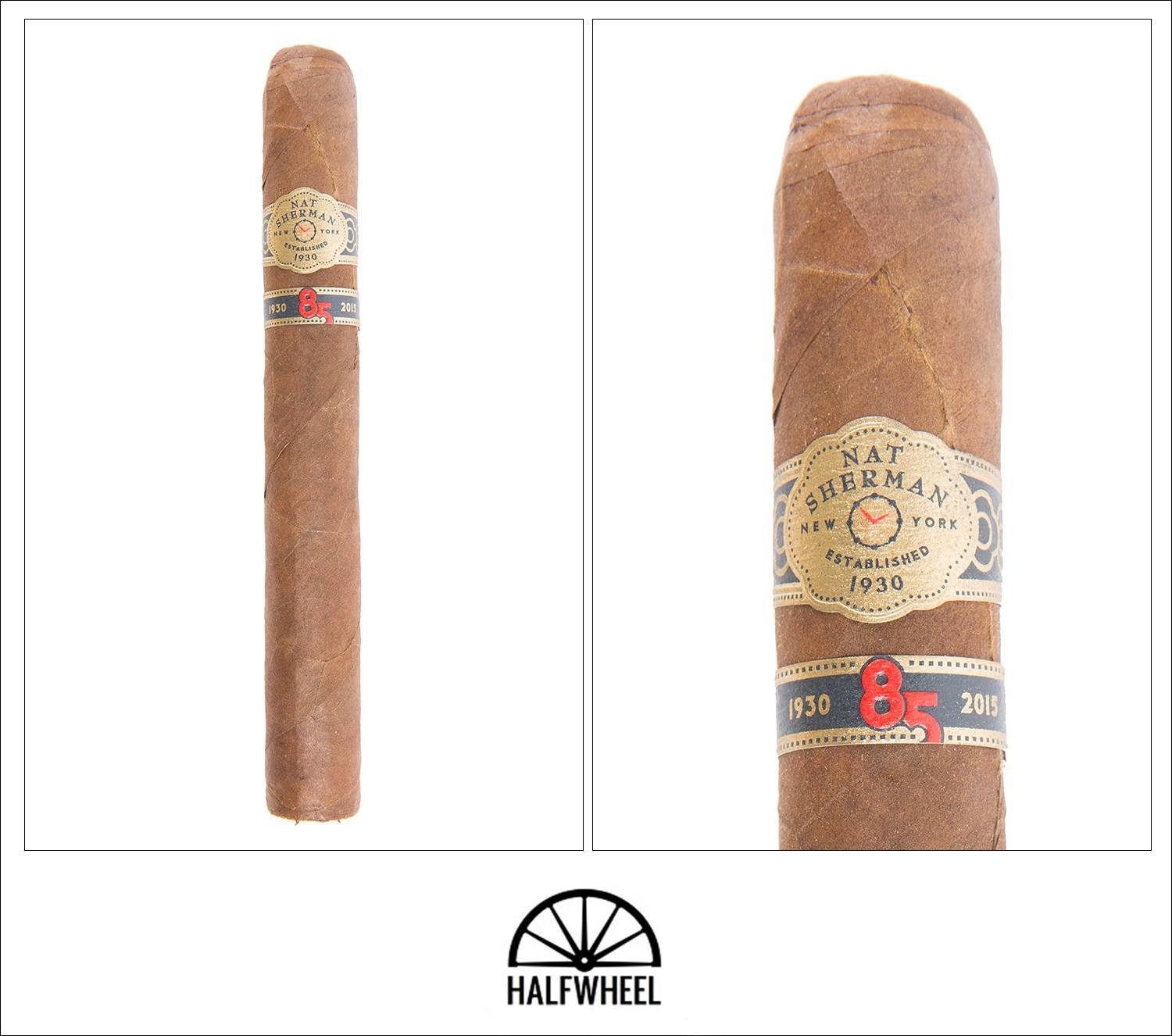 The cigar features the same main band as the Joel Sherman 75th Celebration, but it’s not too challenging to tell the cigars apart: the 85th is shorter, heftier and uses a much darker wrapper. There’s also of course the secondary band, which is also quite different and rather helpful at identifying. As for the wrapper, it’s somewhat rough, but quite oily, and there’s a medium-plus yet distinguishable aroma of sour leather and oatmeal cookie. There’s more of the latter on the foot alongside hay, chocolate and leather. The oatmeal party continues onto the cold draw where it’s joined by some barbecue sauce, a bit of sunflower seeds and some orange juice. It’s really odd, but not disgusting.

Things begin with some cedar, creaminess and leather. That might sounds pedestrian, but there’s an odd play in regards to the texture, with each component rather gritty but the complete profile is somewhat smooth. While the draw of the Nat Sherman 85th begins open, it tightens up less than an inch in, which is nice. There’s nuttiness, some hay and pepper in the mouth; lemon meringue pie through the nose; and watered-down cola and some pepper on the finish. With the tightened draw, the Nat Sherman 85th produces a good bit more smoke, and while the burn is even, it is slow–almost painfully slow. 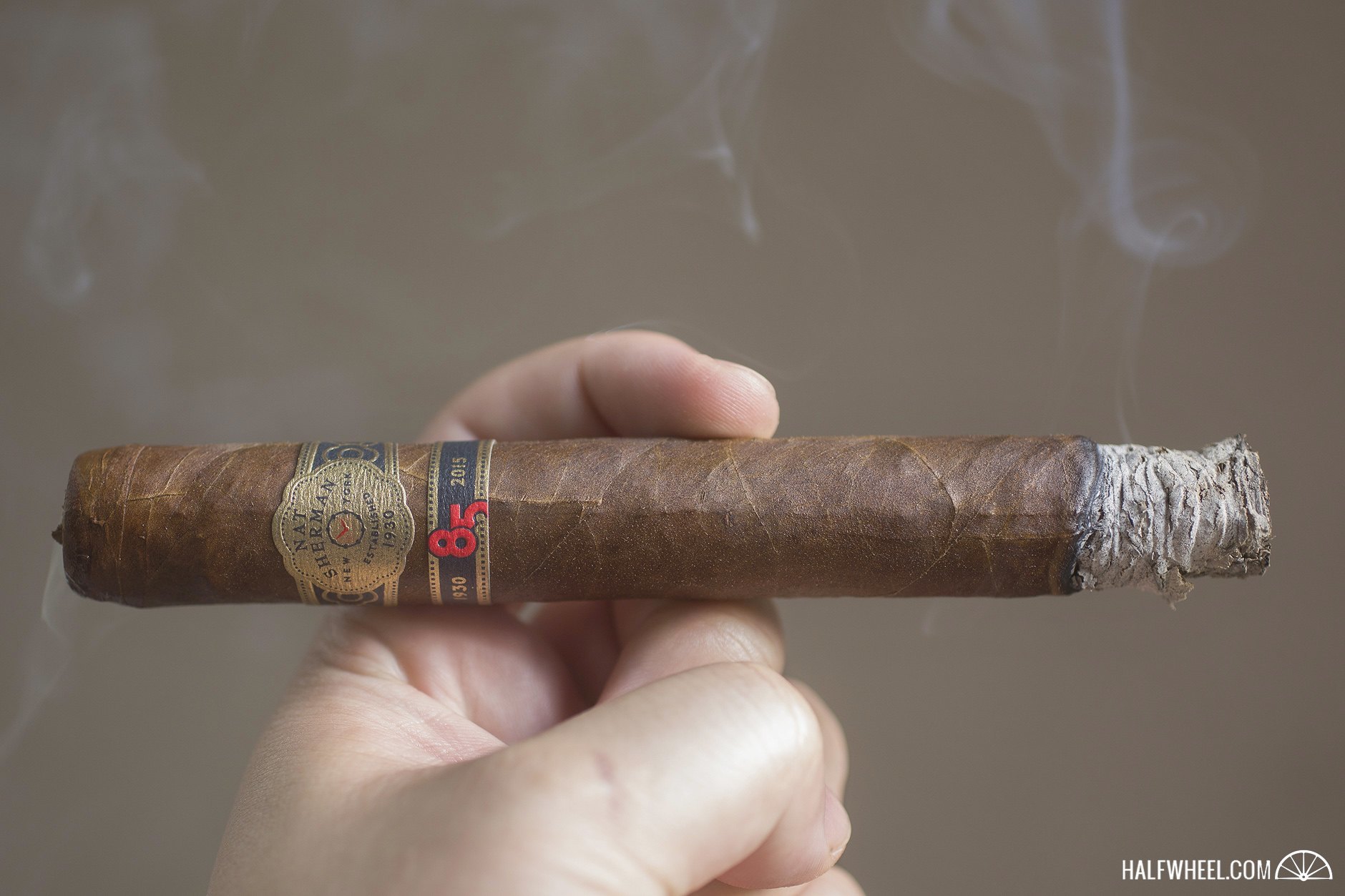 Things are similar in the second third, but there’s an added creaminess that helps to balance out the nutty flavors, which have now turned walnut-like. There’s some muted coffee behind that, but the biggest change is in the nose, where the lemon meringue note becomes much more generic, sharper and acidic. Once again, there’s still this odd play between individual flavors that are sharp and gritty and an overall profile that is quite smooth. There’s not a huge change in strength, it’s still medium-plus; flavor, medium-full; or body, full. Midway through, the flavors in the mouth lessen a bit and the retrohales take complete dominance. 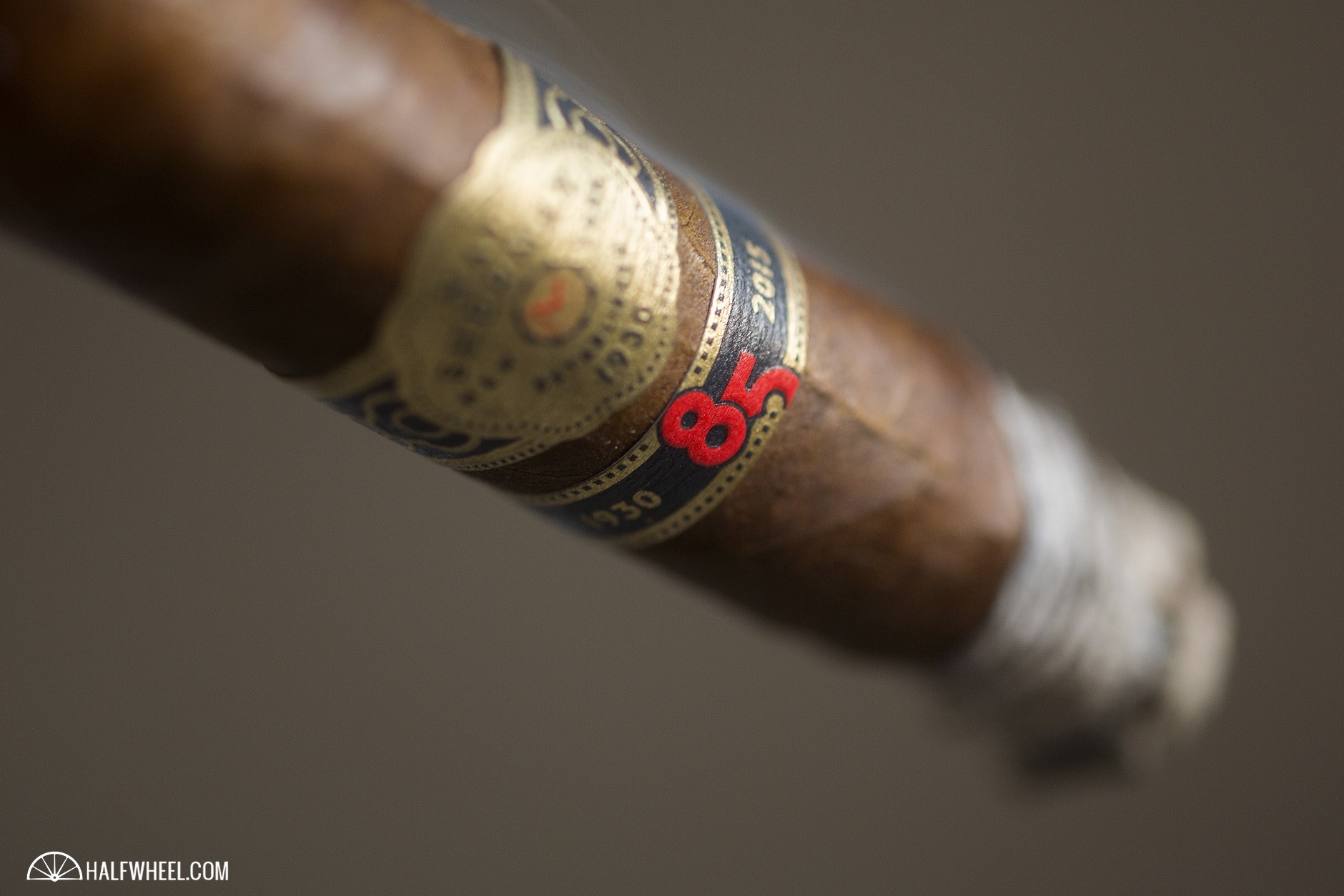 The citrus in the nose loses some of its sharpness, only to be mixed with redwoods. There’s also coffee, oak and a touch of a ginger candy. What’s left in the mouth changes with the creaminess departing, revealing a saltiness underneath. While I get a few generic spices, there’s not any real pepper, which hasn’t been present since the first third. The Nat Sherman 85th requires a bit more attention to keep it lit, but in never manages to go out. 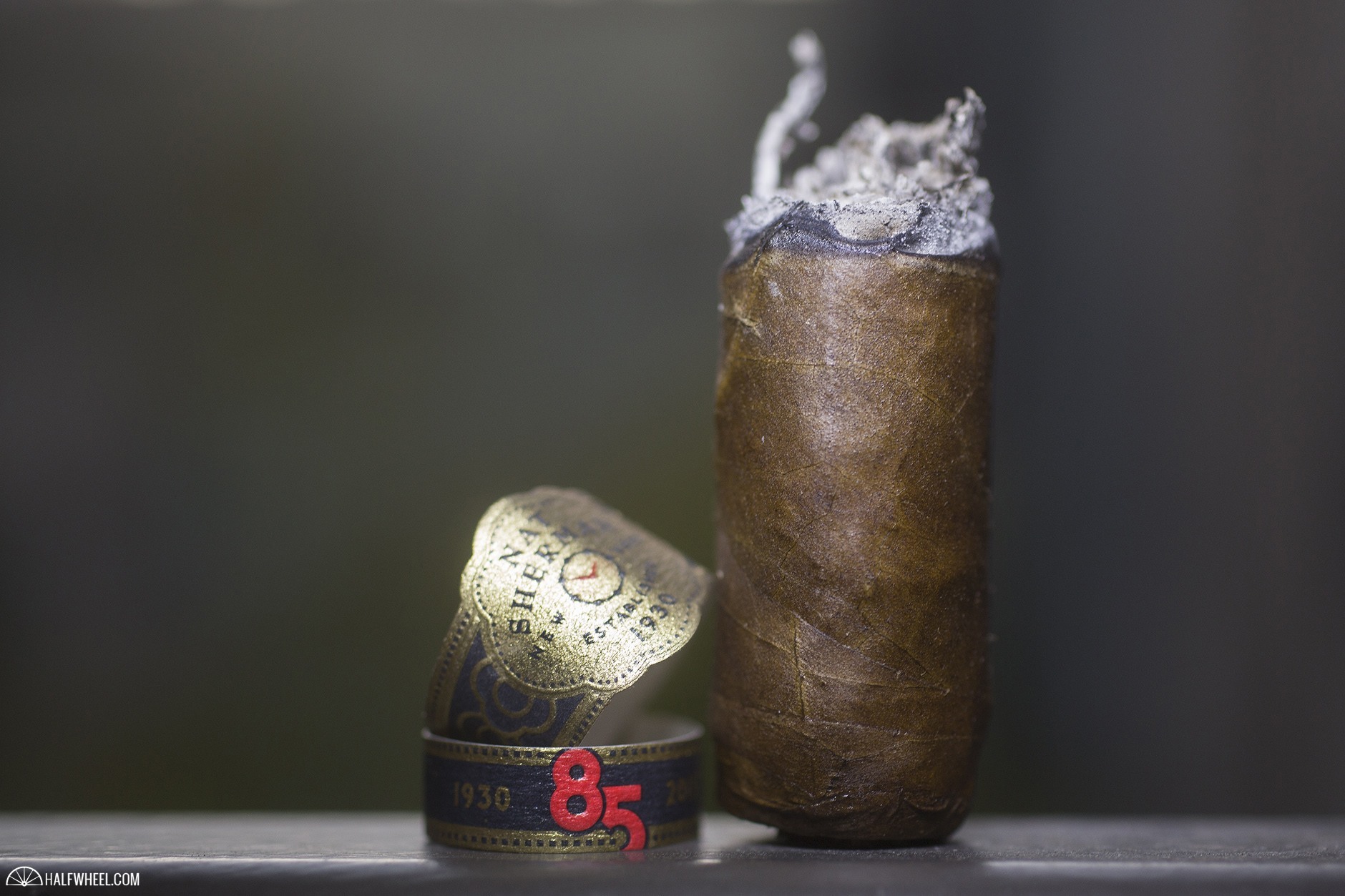 What’s remarkable about the Nat Sherman 85th Anniversary is how much it changes. Not because it’s a story of a plethora of different profiles, but rather, without writing down the tasting notes, it’s hard to detect the changes. The transitions are so seamless—one flavor disappears over the course of a few puffs while another emerges—that I struggle to find the exact points where it changes. Combine that with the uniqueness of the rough individual flavors and the smooth overall flavors, this is a very good cigar. It’s a pricey addition to the Nat Sherman portfolio, but easily my favorite of the bunch.