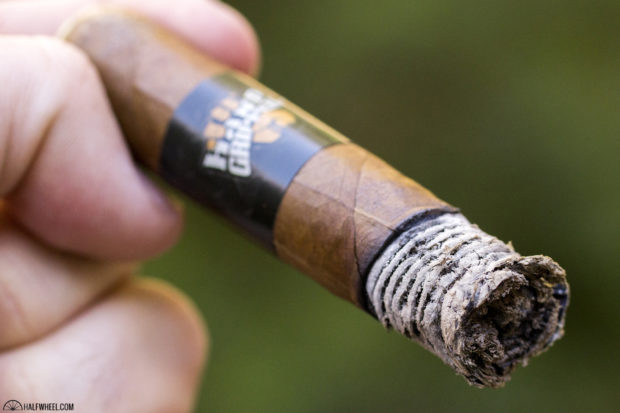 If there is one phrase I have learned not to say, it’s now I’ve seen it all.

In January, the South Florida retailer Smoke Inn turned to MoyaRuiz cigars to create the 13th installment in its Microblend Series, and to say that the cigar the company came up with is unique would be an understatement to say the least.

The cigar is the Hand Gripper, and if you take a moment to think about what comes to mind from that name, you’ll probably get an interesting look on your face between huh?!? and that’s really cool. 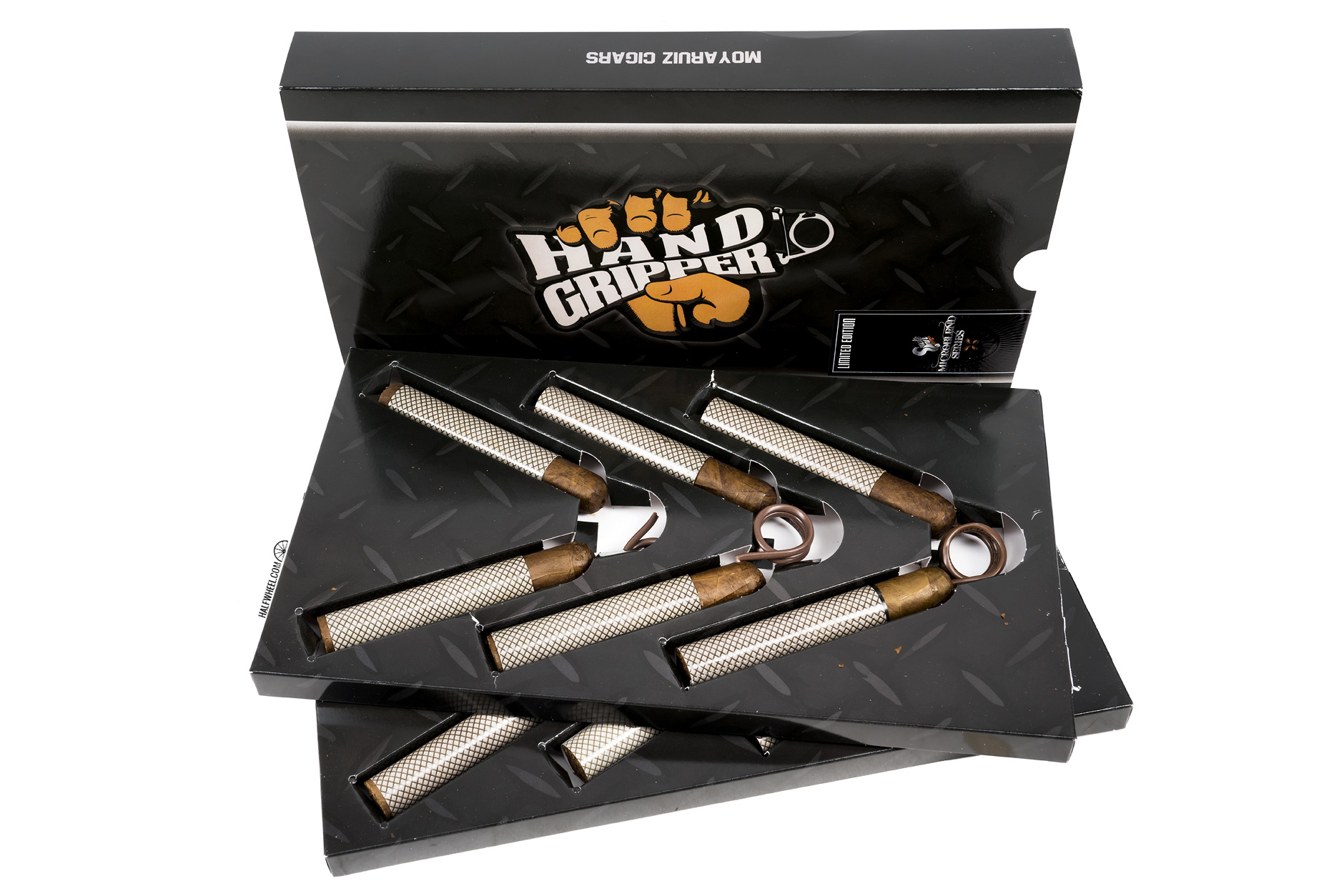 The release is distinctive for a coiled spring that has been inserted into the heads of two cigars to create what looks like the old school hand and grip strengthening devices. 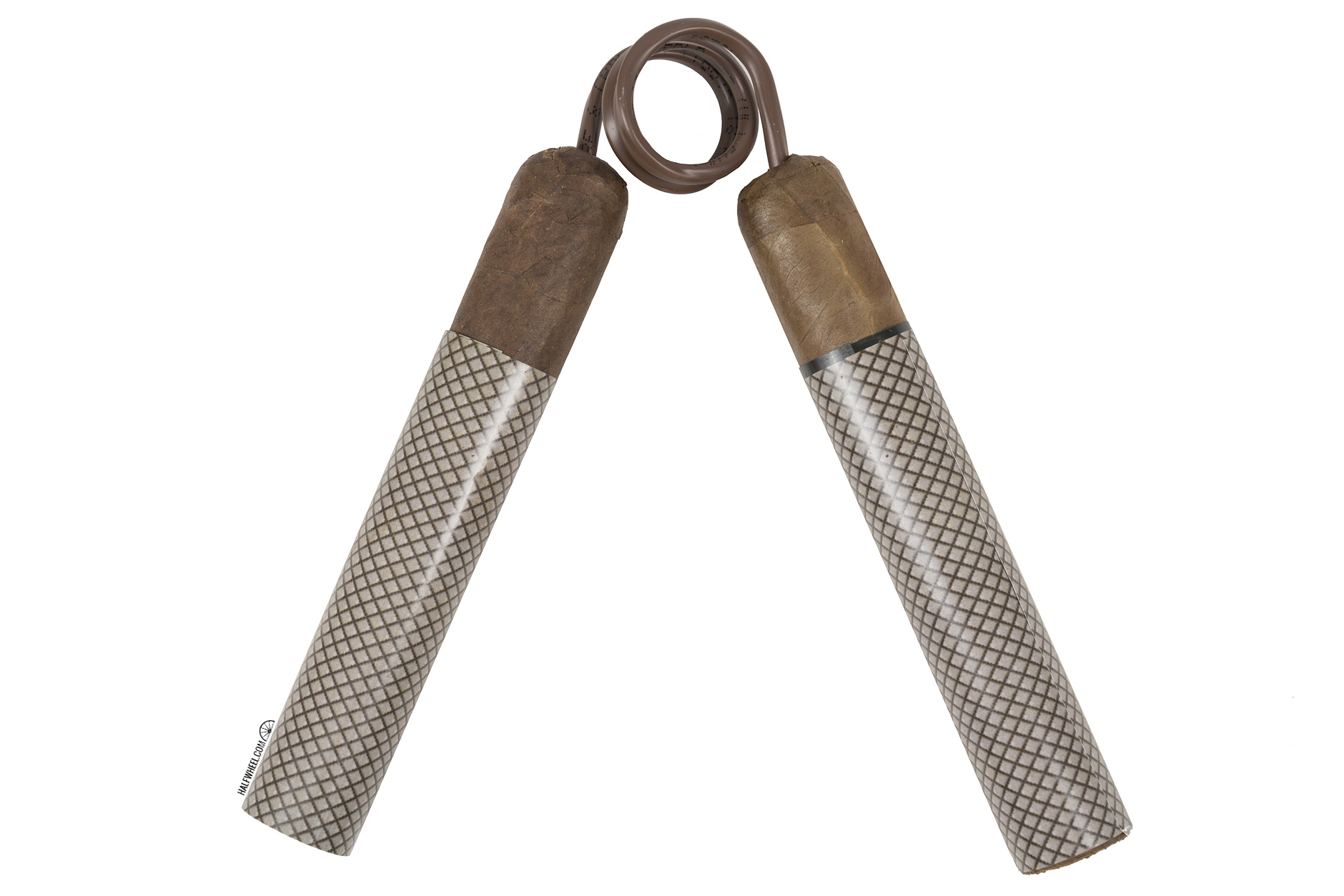 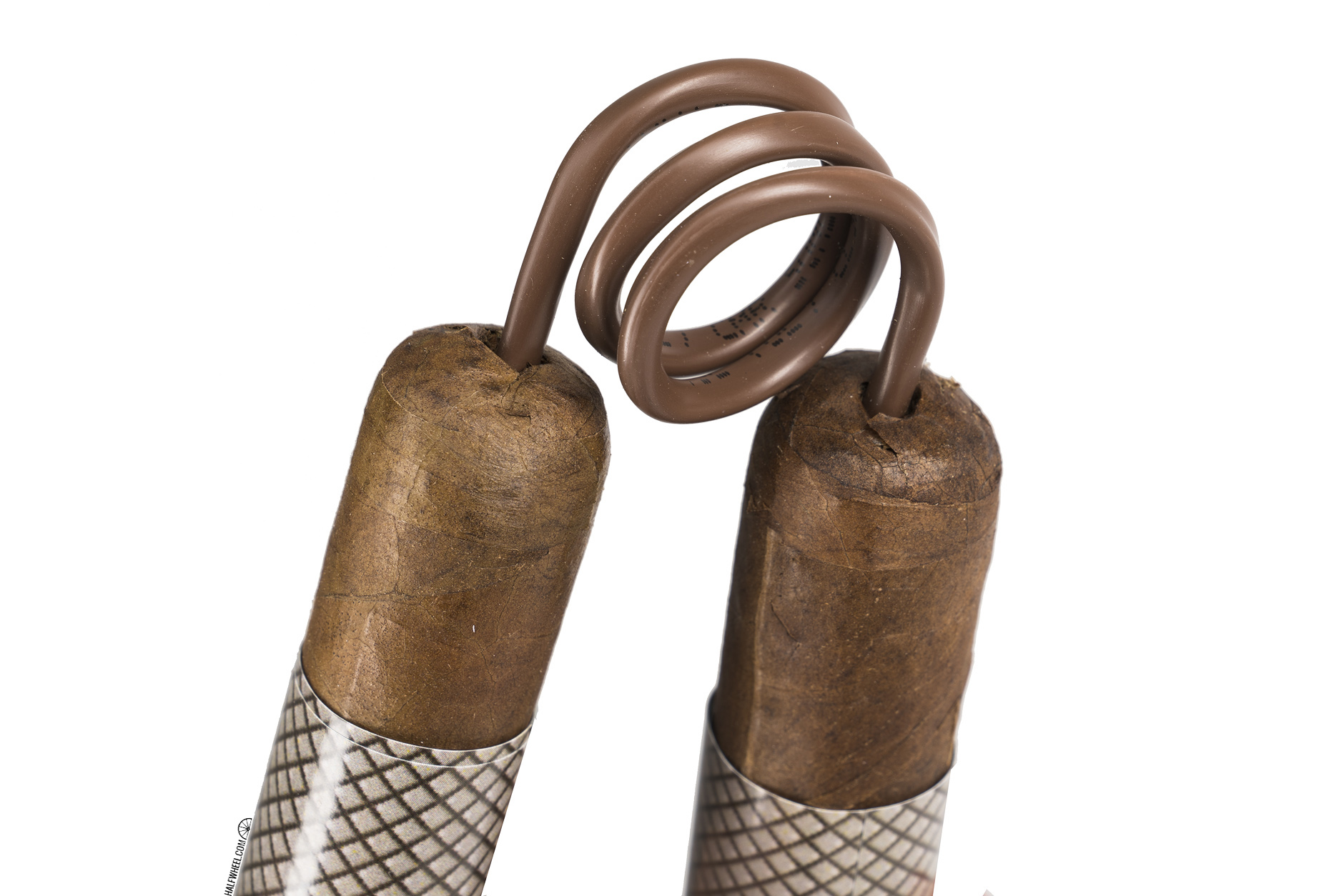 As for the cigars that make up the “handles” of said device, they are 5 x 52 robustos that use an Ecuadorian habano oscuro wrapper over a binder and filler that comes from Nicaragua. They are made at the La Zona Cigar Factory in Estelí, Nicaragua, with 300 numbered boxes of 12 cigars produced. They come with an MSRP of $99 per box or $8.25 per cigar.

It’s a design that builds on the company’s La Jugada Nunchuck, a 2013 release for Cigar Dojo that connected a pair of cigars by extended pigtail caps in order to have them resemble a pair of nunchucks. 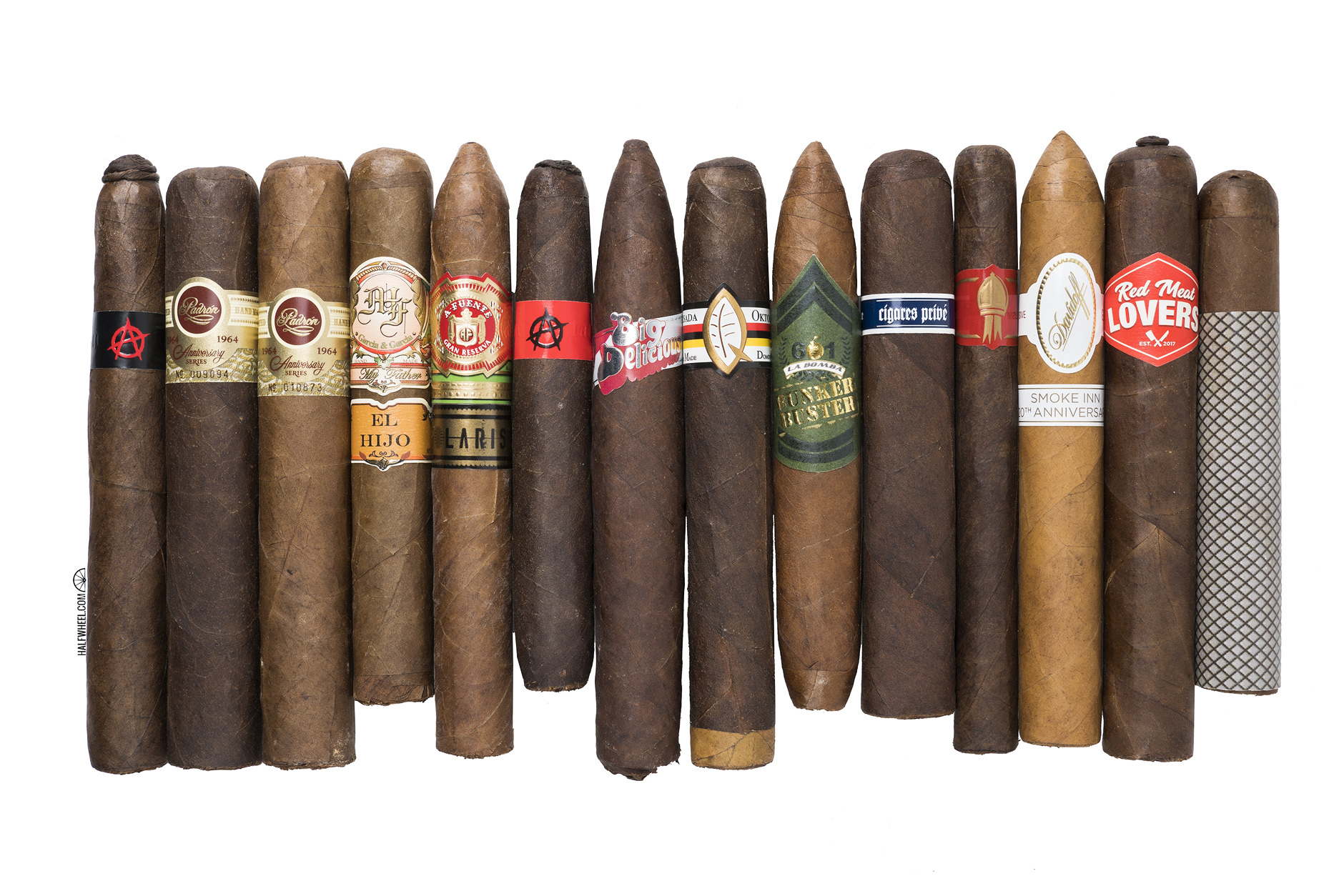 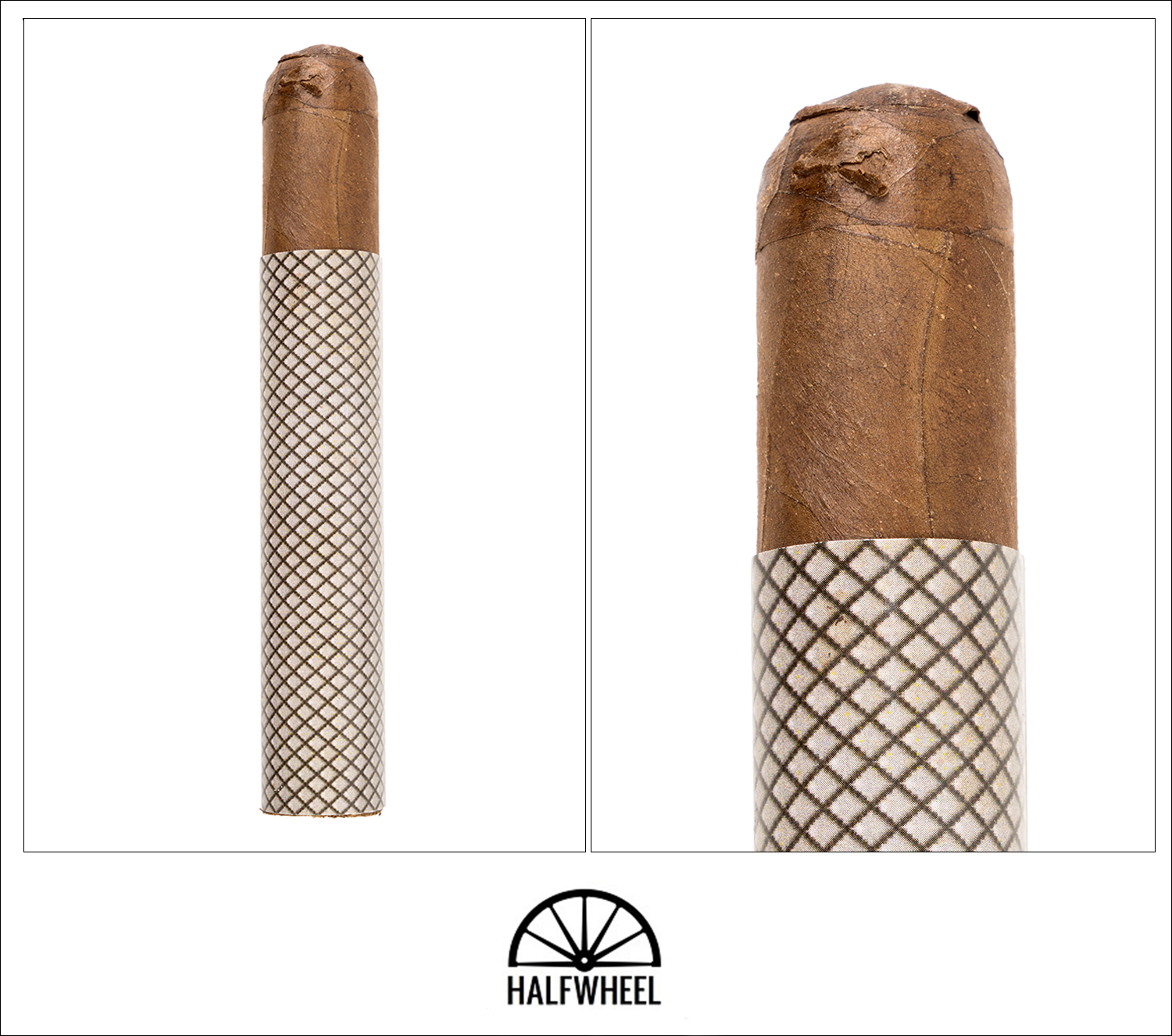 I’m not sure what it was about these cigars when they arrived from the office, but I could absolutely not make out what the pattern was on the band that covers about 80 percent of the cigar; maybe it was just the lighting or the lateness of the hour when I opened these up, but for some reason the fairly simple lattice design just didn’t register in my brain. There’s also no branding on the bands to indicate what the cigar is, and since it didn’t come with the coiled piece in the middle, I was really left to guess what this was. That was before I noticed what looks like a smaller than standard punch cut in the head of the cigar, which immediately clued me in as to what it is. I’m a bit concerned about what this design aesthetic is going to do to the draw of the cigar as it appears to go fairly far down into the cigar. Even with this pre-punched design, I’m still opting to go with a scissor cut for this review, both for consistency with other reviews and that I don’t think there’s quite enough of an opening to get an ideal draw. Taking off the large primary band reveals a smaller band underneath that indicates what the cigar is, as well as a slightly darker wrapper than I was expecting given how little I could see above the outer band. It’s definitely Ecuadorian habano, though I’m not sure it quite merits the oscuro term. There’s bit of color variance but nothing drastically noticeable, along with some small veins and a fine velvet texture on the fingers. The roll is on the firm side with just a bit of give, consistent from head to foot, and with flat seams and a well-constructed head. The foot of the Hand Gripper offers an aroma of sweet wheat bread, an almost singular note without pepper, but one I’m familiar with and quite enjoy, thus there’s no complaining about that smell. Even with the hole in its middle, the cap generally comes off without issue, though it does bow together in the process. The cold draw is smooth and has a bit of pepper complementing the sweetness and wheat bread note I picked up from the foot.

Tell me that a cigar uses an Ecuadorian habano wrapper and Nicaraguan binder and filler, and I’d say this would be one of the profiles that would come to mind before lighting it up. There’s a good balance of pepper, earth and fresh woods, a bit dry but not enough to dry out my mouth completely. Flavor intensity starts just shy of full and progressively backs off to medium-plus, while strength starts more towards medium-full before dialing it back to just about medium. Other than the changing intensity and a bit drier profile by the end of the first third, there isn’t much change in the flavor profile. The draw and burn are both stellar, with decent amounts of smoke produced and a tight ash that doesn’t flake or drop off unexpectedly. 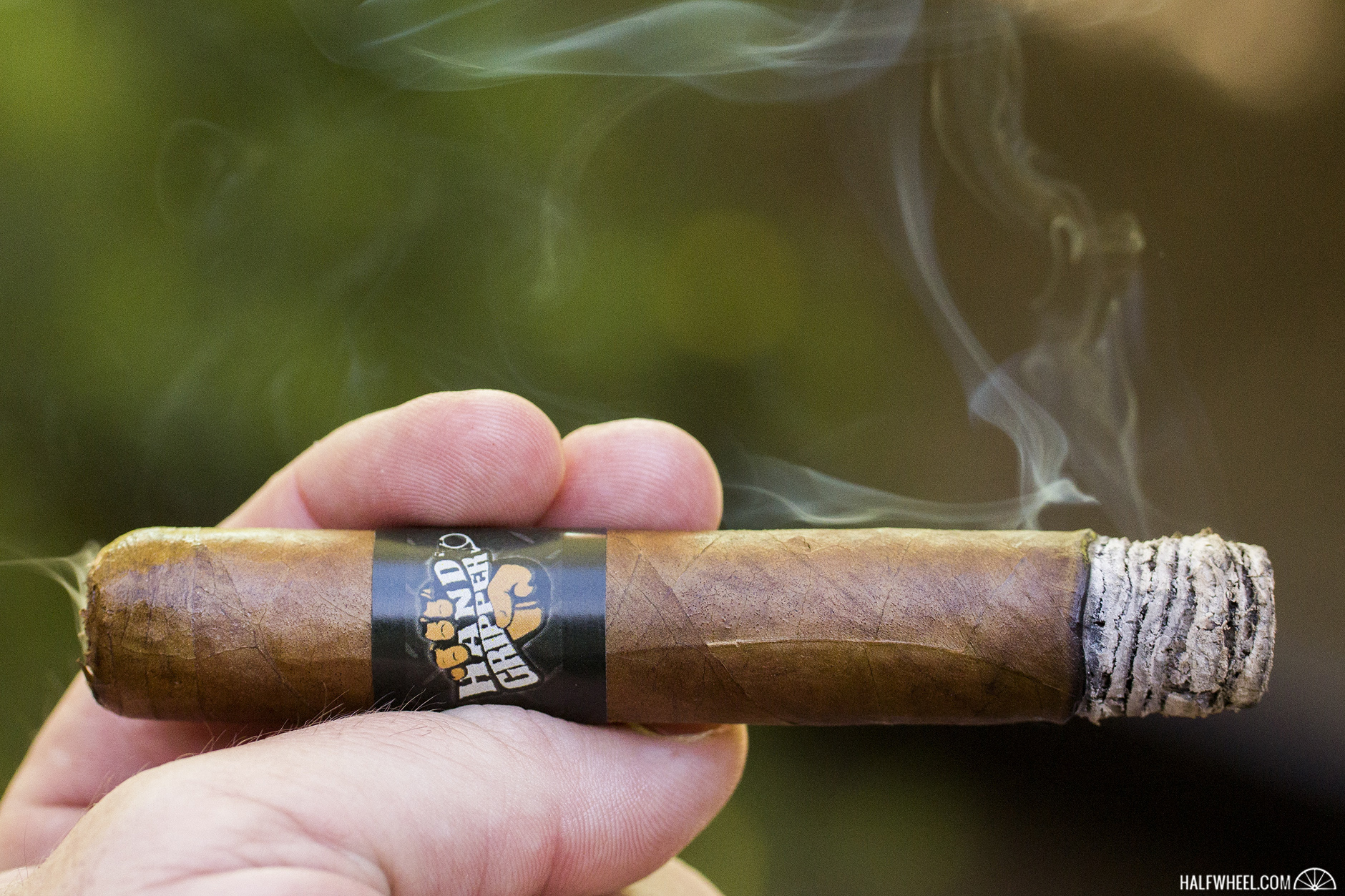 The MoyaRuiz Hand Gripper stays fairly linear through the second third, though it does seem to be building in vibrance of the flavors as well as overall strength after receding in the first third. Finally, around the midway point, the cigar takes an appreciable step forward and gets a bit more robust as the earth picks up a rockier, rougher texture and the black pepper becomes a bit stronger and more pointed. The draw remains quite good, the burn line is sharp and even, and smoke production is more than sufficient. 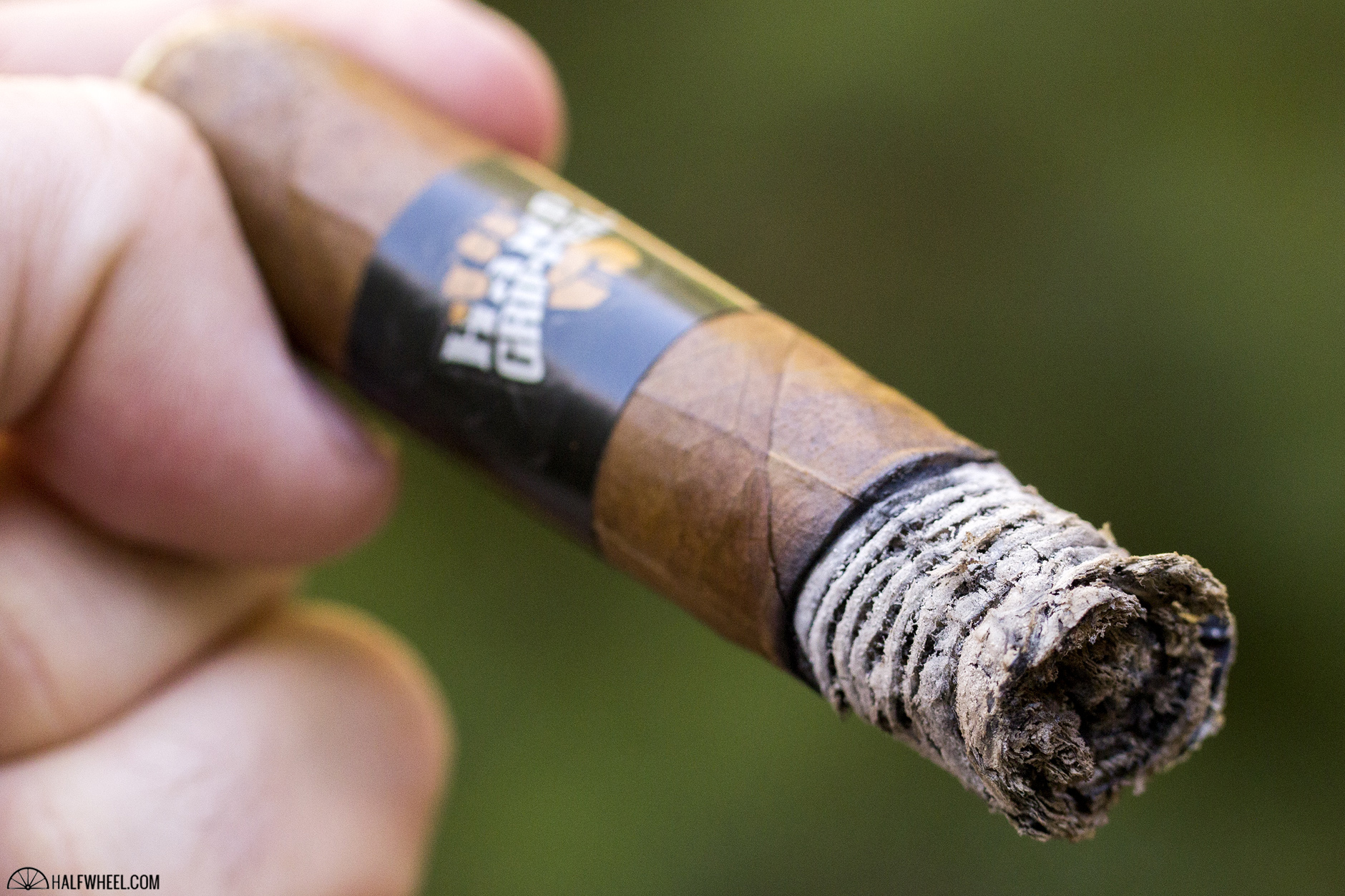 The progression of the flavors continues into the final third of the Hand Gripper, steadily getting stronger and bolder seemingly with every puff; measured steps that have the cigar sitting close to if not fully in full-bodied territory just ahead of when the band needs to come off. I begin to get a bit a subtle brewed coffee note from the profile, lighter on the profile while a bit more pronounced on the palate and also becoming more so with each puff. The draw, burn and construction are all flawless, and I’m able to smoke the cigar down to about as small of a nub of tobacco as I desire. 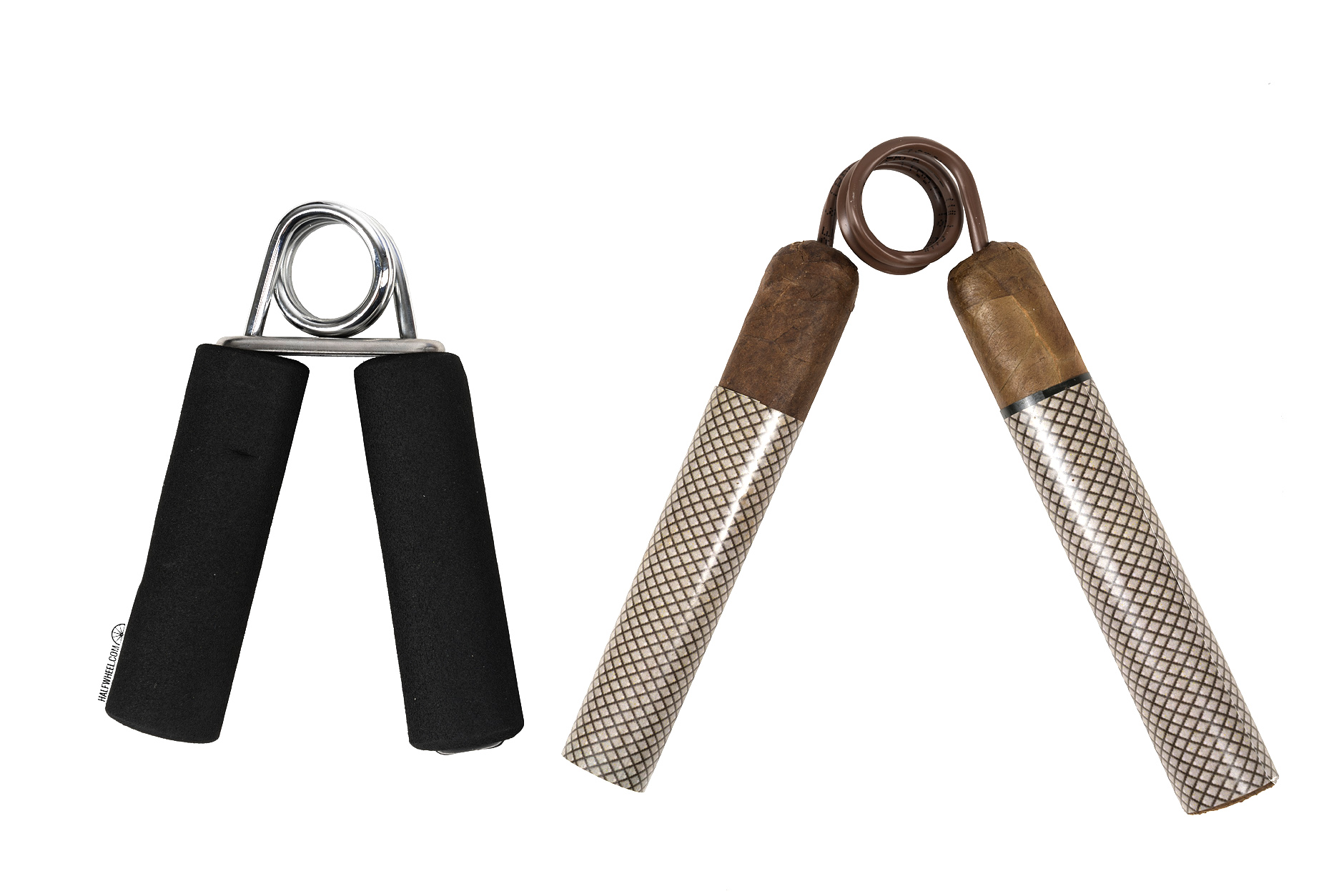 As I noted at the start of the first third, the MoyaRuiz Hand Gripper offers the kind of flavors I’d expect from what has been said about the blend: some pepper, earth and woods, all on the dry side of medium and all pretty enjoyable. The combination is also rather well balanced, the profile is consistent across samples and the overall experience checks pretty much every box. But here’s the rub: little about the Hand Gripper stands out positively enough to make it better than a number of other cigars on the market that offer a nearly identical profile. So while it’s very enjoyable and easy to recommend for fans of medium-plus profiles, it’s likely going to fall short for those looking for a standout cigar experience, which is a shame given how much the packaging and concept stands out from its competitors.