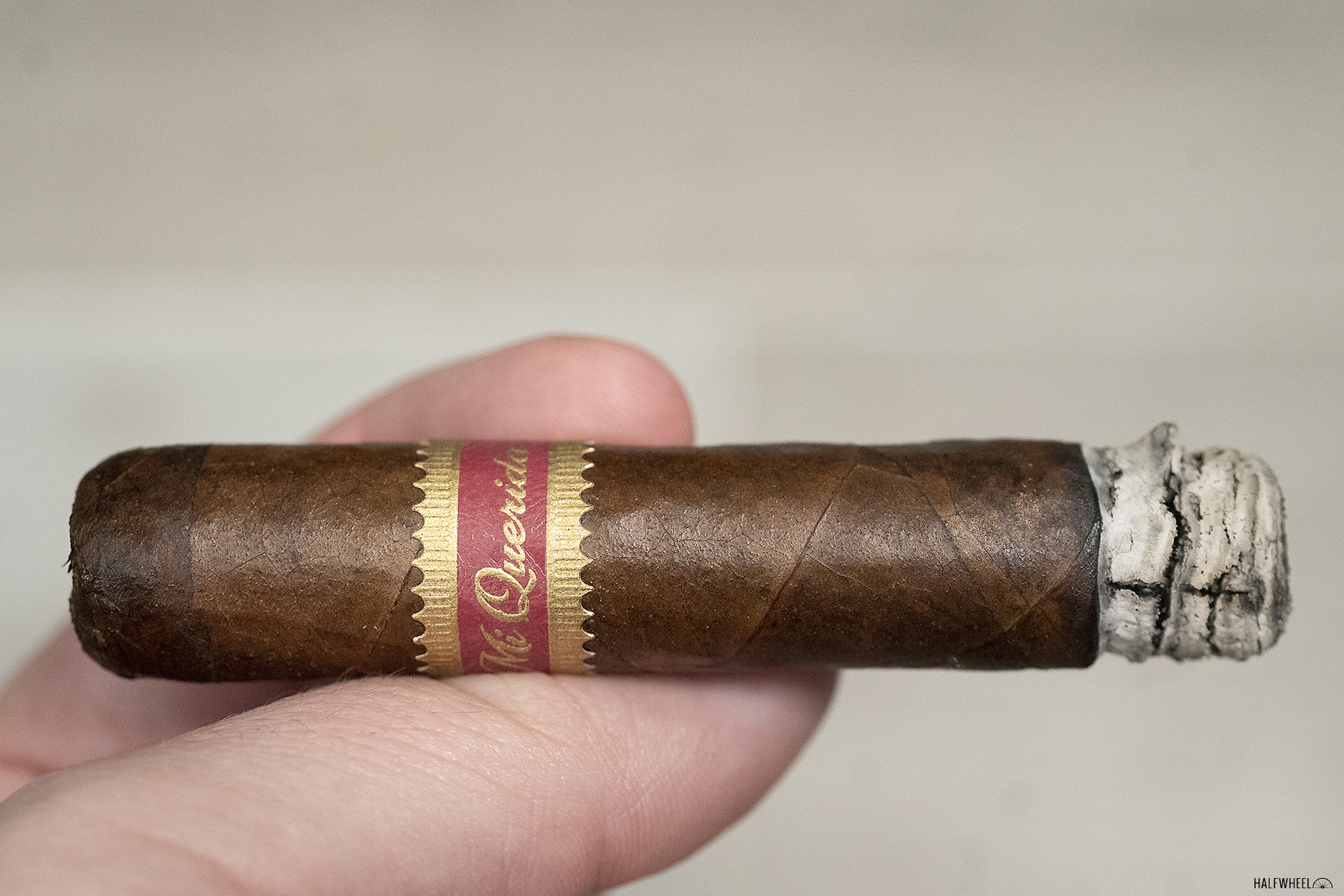 As I note in the bio section that appears beneath my posts, I like telling the stories behind cigars. Some are interesting, some not so much, and some cigars don’t come with much if any backstory at all. But regardless, when there is a story there, I find it interesting in better understanding the cigar I’m about to smoke.

In the case of the cigar being reviewed today, it has a pretty decent story behind it, at least in terms of how we got to this specific vitola.

In 2016, Dunbarton Tobacco & Trust released Mi Querida, a cigar that was notable for being Steve Saka’s first broadleaf cigar for his new company, Dunbarton Tobacco & Trust. As you might know, Saka was previously president of Drew Estate, and broadleaf factored prominently into the company’s flagship premium cigar line, Liga Privada, so seeing what he would do with the varietal for his relatively new company was something many in the industry were curious about. The cigar got its name from the Spanish phrase for my mistress, and used a Connecticut broadleaf wrapper over a Nicaraguan binder and filler.

Then two years later, in 2018, Saka gave the Mi Querida line a new spin by way of a modified blend created for United Cigars’ Firecracker Series, in which manufacturers create petit robustos that are quite often strong and punchy in celebration of the July 4th holiday. In the case of the Mi Querida line, Saka created a 3 1/2 x 50 vitola that used the much the same blend as the regular Mi Querida line, but which he said had been front loaded with ligero and which added Dominican tobacco to the filler.

While just 500 boxes of 20 cigars of the Mi Querida Firecracker would be produced, it would prove to be more than just a one-time release. It would return in 2019, and in that same year it would result in a new line extension called the Mi Querida Triqui Traca that gets its name from a term used to describe firecrackers that are tied together and commonly associated with celebrations in Nicaragua. The regular production line would arrive at retailers in September 2019, debuting in two sizes, the No. 552 and No. 648, a robusto and corona gorda, respectively.

Last December, a fifth size was added to the line, the smallest of the regular production offerings. 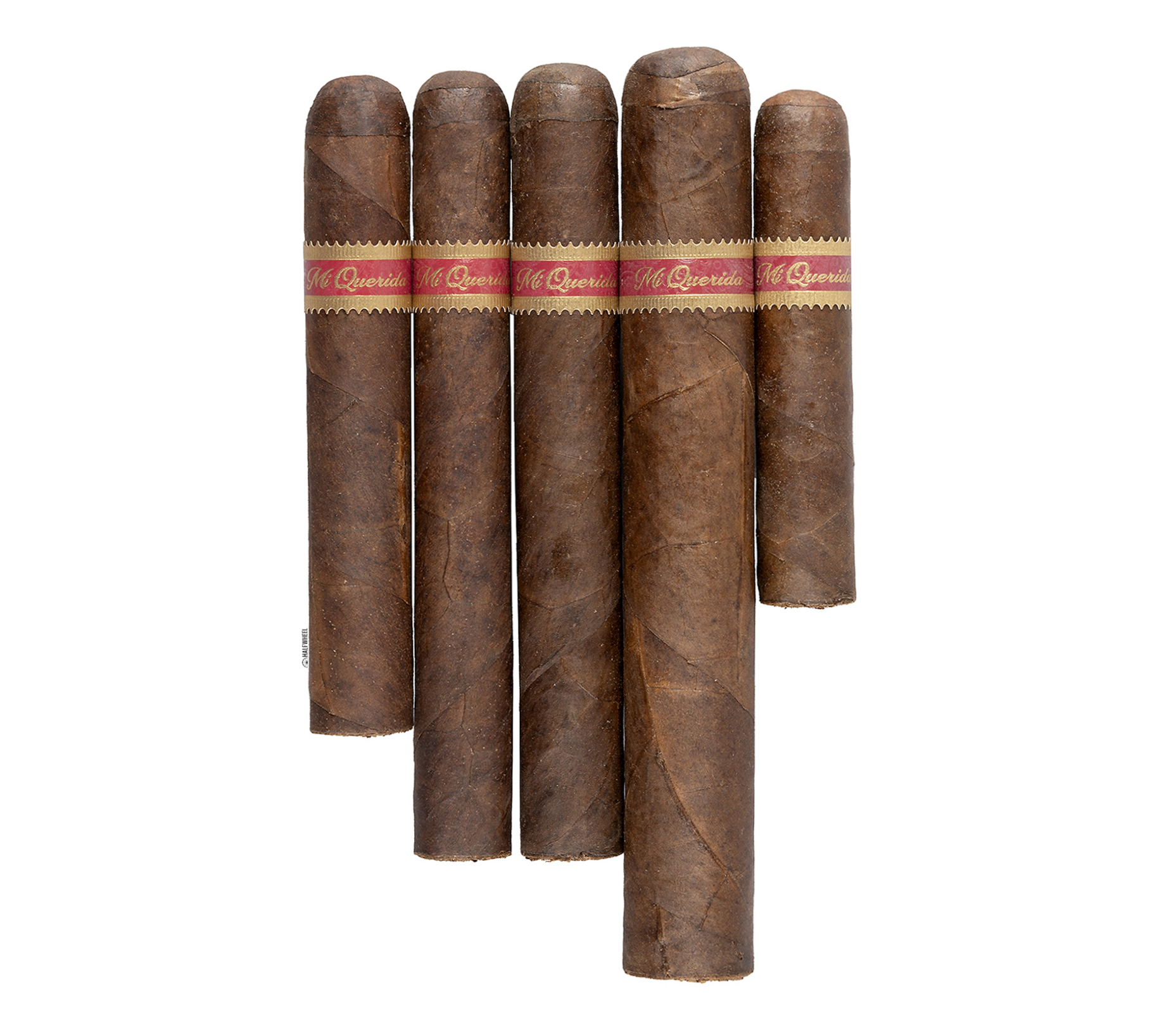 As you might notice, all of the vitolas are named for their length and ring gauge.

In an era of toros being the standard vitola and gordos as common as matches in cigar shops, it takes me a minute to take in the short and relatively slender vitola of the Mi Querida Triqui Traca No. 448. The wrapper has a ton of sheen to it, and it sports a very rich and dynamic color, showing some mottling and variance but one that works well, much like the kind of variance you see in certain paintings. One of the cigar’s wrapper also has some tooth, certainly more so than the other two. Each sample is rolled firmly and quite well to my eye, with flat, visible seams, and particularly well-crafted heads and caps. The foot has aromas of sweet salami and black pepper, about a 80-20 mix at first sniff but with a more lingering effect from the pepper than the proportion would indicate. There’s a bit of a bulked tobacco smell as well, and then something that is a combination of peanut shells, furniture woods and light earthiness. Air moves normally on the cold draw, neither loose nor tight but with a comfortable level of resistance. The flavor is pretty mild, with a bit of the salami flavor, generally not as much pepper, and some of that finishing combo aroma.

The Mi Querida Triqui Traca No. 448 gets going with a good bit of white pepper and some light earthiness that has hints of clay in it. In addition to being a decently punchy start, it also has very lingering finish, and it’s on the finish that a bit of chalk emerges. The body of the cigar begins to fill out a bit, though inconsistently among the samples, meaning that in one cigar the smoke feels a bit thin, in another it’s rich and meaty, and in another it’s somewhere in the middle. Retrohales begin to develop as well; while they have had good pepper from the start, as the burn line progresses they add some of the Italian dry salami sensation I found in the prelight aroma, giving it a slightly oily and savory spin that I find quite enjoyable. One sample offers an earthier retrohale, which works just as well if a bit more familiar and less distinctive. The first third comes to a close with a clean and crisp flavor that will be most notable for the tight and bright pepper in the nose and on the palate. Flavor is medium to medium-full, body is medium, and strength is medium. Construction and combustion is excellent on all fronts.

While I enjoyed the first third of the Mi Querida Triqui Traca No. 448, I thought it could benefit from a bit more body and foundational flavor. The second third ushers those in fairly quickly, kicking up the earth and pepper to fill out the profile, yet keeping it from getting overly heavy. There are a few puffs where the profile gets a bit smokier, a change which furthers the progression of flavor that the second third seems to be all about. Retrohales pick up a bit more gravitas, as the pepper gets heavier as it sheds some of the brightness from earlier, while backing notes of black coffee and smoky earth provide foundational support. The complexity of the cigar is impressive as the second third comes to a close, as while the flavor has gotten fuller it is still impressively clean on the palate and the retrohales are very engaging. Construction and combustion remain stellar, while flavor is a solid medium-full, body is medium-full, and strength is medium. 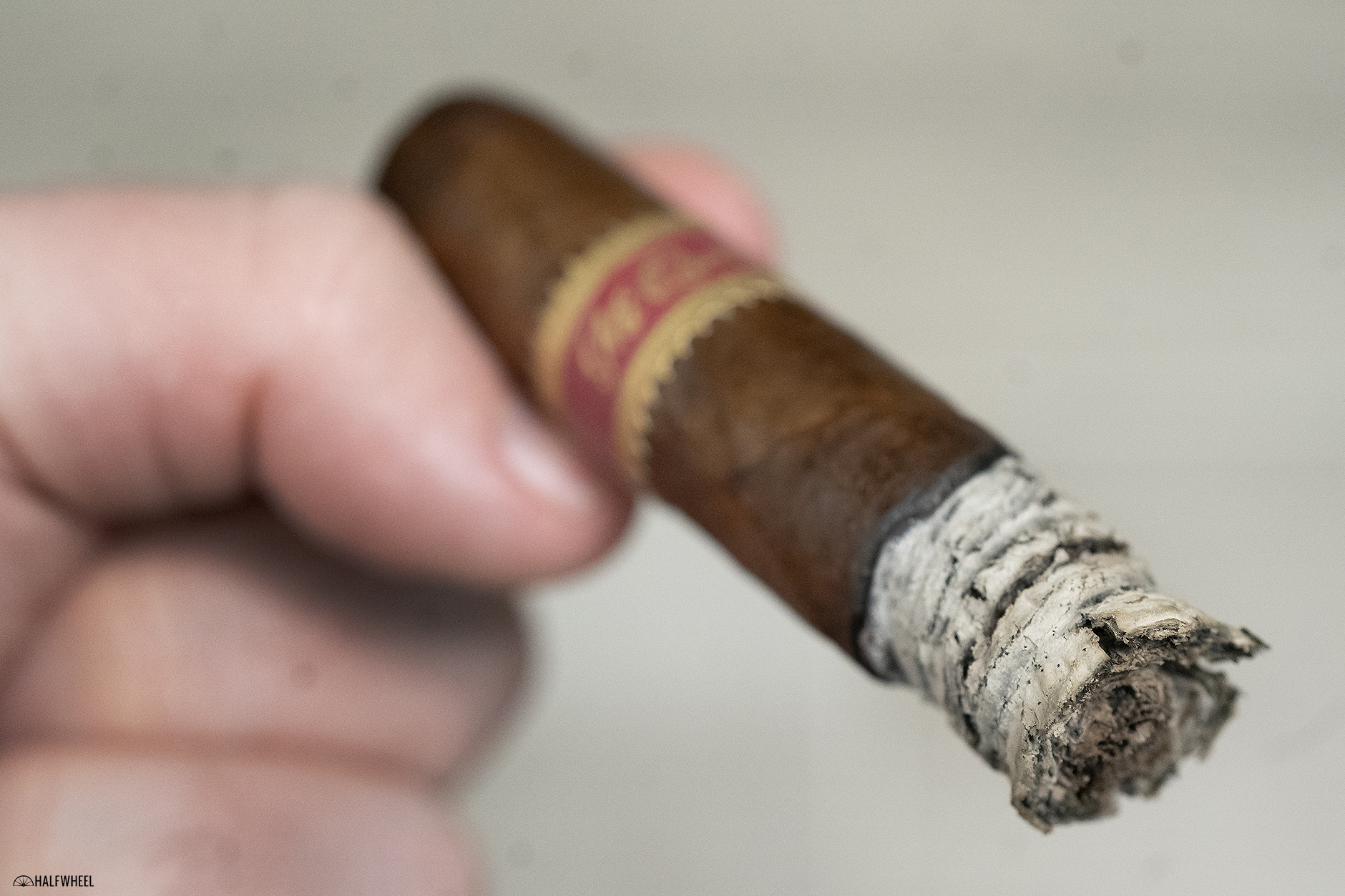 While the second third of the Mi Querida Triqui Traca No. 448 filled out the profile and gave a bit more body, the final third gives it a bit more brightness and heat. There’s the bite of red chili pepper seeds that begins tingling the lips, while the lighter pepper from the first third starts to return. With the exception of the red chili pepper, it’s an interesting centering of the body and flavor between what the first and second thirds offered. Retrohales are a bit brighter than earlier and now provide a more pronounced accent to the flavor. Flavor finishes medium-full, body is medium-full, and strength is medium. I can’t say enough good things about the technical performance, as it was essentially flawless. 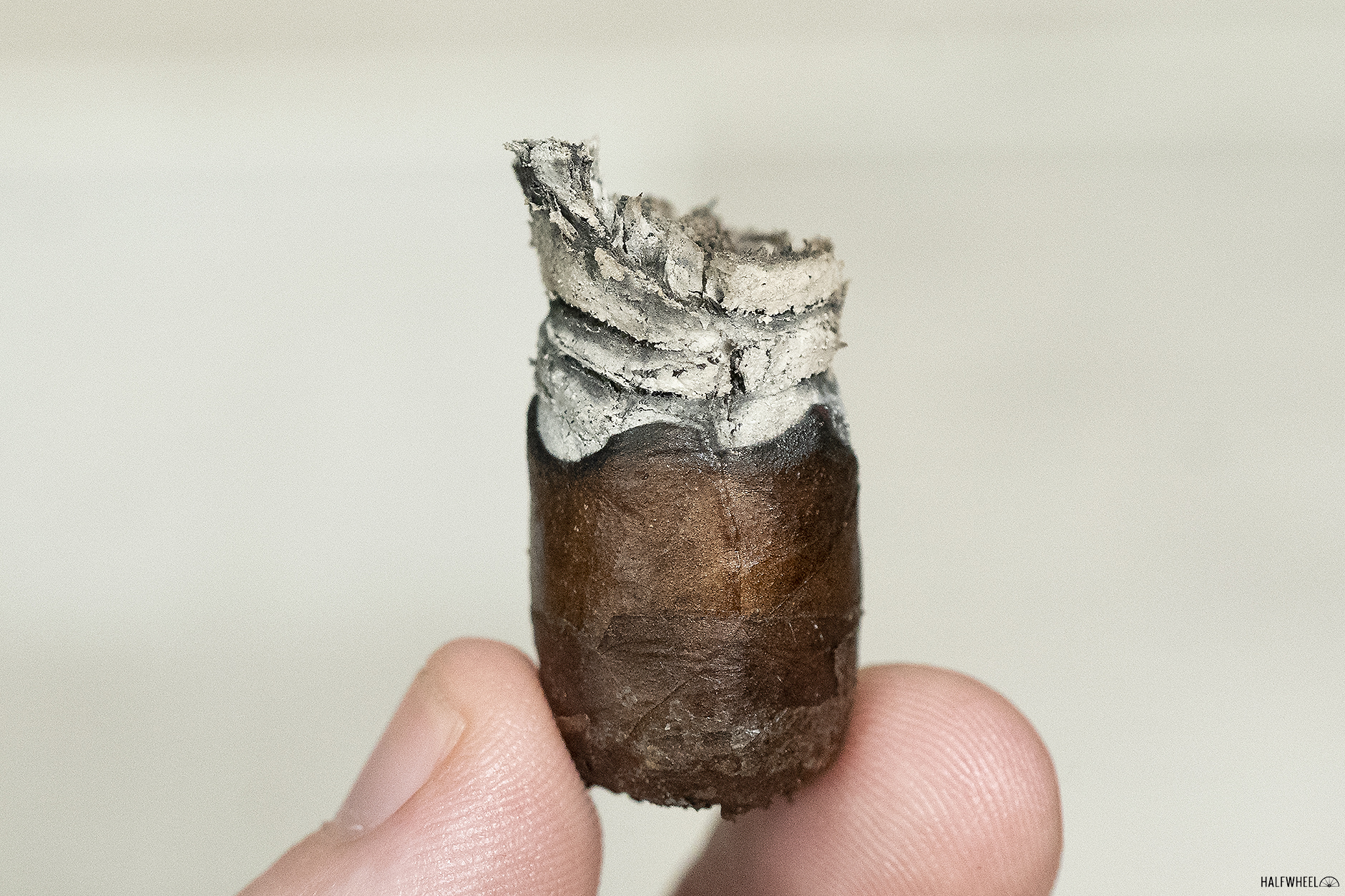 The Mi Querida Triqui Traca No. 448 is a remarkably impressive cigar, packing a dynamic flavor into a compact vitola that has some of the best construction I have encountered recently. The three samples, while distinct from one another,  showed similar progressions from start to finish, reflecting the individuality of each sample as well as the blending intentions of their creator. Much like anyone could criticize any food dish for lacking something, it’s best to simply enjoy everything that the Mi Querida Triqui Traca No. 448 has to offer, as it is very, very enjoyable.