The story of the massive cigar being reviewed today starts with a relatively tiny cigar that was released in mid-2018.

Technically, the story begins in 2016 when Dunbarton Tobacco & Trust released the Mi Querida line, the company’s first cigar to use a Connecticut broadleaf wrapper. After expanding the line in a few different sizes, the company introduced the Mi Querida Firecracker, a 3 1/2 x 50 parejo size with a long pigtail fuse. It was part of Two Guys Smoke Shop’s long-running Firecracker series, where a number of manufacturers have produced cigars in the small size with a long pigtail.

That cigar was described as a tweaked version of the blend that was “frontloaded with ligero.”

In 2019, the company said it was expanding that line in the form of the Mi Querida Triqui Traca, which added a strong Dominican ligero to the otherwise Nicaraguan filler combination.

Then in early 2020, Dunbarton Tobacco & Trust added two new sizes, a 6 x 52 toro and a 7 x 64 gordo extra. That brings the total number of Triqui Traca vitolas to four. The name Triqui Traca is a reference to a local term in Nicaragua used to describe various types of firecrackers. This is a rather large cigar, longer and thicker than the 6 x 60 size that is normally the largest cigar you’ll find in a line, if it is even offered. The wrapper is extremely uniform in color and has fewer veins than many cigars much smaller. The very supple feeling and texture from the wrapper of the gigantic Triqui Traca is something notable. As far as the aroma goes, it’s medium-plus with smells of freshly poured concrete, leather and walnuts. The foot is a bit stronger with lots of chocolate, a bit of leather and a wet mud smell. Cold draws are a reminder that I’m going to be here for a while due to the volume of air, but flavor-wise they deliver cocoa, blueberries and something that reminds me of watered-down Dr. Pepper. One rather interesting sensation is the draw. It’s certainly not tight, but I can tell that I’m not getting airflow all the way through the cigar, something that I imagine is a result of the sheer volume of the vitola.

The Mi Querida Triqui Traca No. 764 starts with lots of bread flavors over leather, chocolate, creaminess and fruitiness. While there’s a ton of smoke production coming from the foot, there’s not much making it into my mouth on the very first puff. Once again, this is one of the quirks of the size. By puff number three, there’s smoke everywhere: in my mouth, coming off the foot, above the ashtray, in front of my face, heading towards the ceiling. Flavor-wise, the first third settles on a mixture of earthiness and creaminess over the base over some leather and cream soda. While there are times in which I get other flavors, none of them seem to stick around for more than a couple puffs and outside of the wet mud sensation, none of them really return during the first third once they disappear. The finish reminds me of my mouth 15 minutes after drinking some cola—back when that was a regular part of my life—some sharp sweetness that has been muted. Beyond that there’s some woodiness, a coffee fruit tea sweetness and a mild amount of pepper. Retrohaling leads to more earthiness, albeit drier now, and burnt butter. While there’s not much in the way of new flavors, there is a velvet-like texture to the smoke that is different than how the smoke feels in the mouth. The finish of the retrohale has oak and creaminess. Flavor is medium-full, body is medium-plus and strength is medium-plus.

More than 90 minutes in and I’m getting close to the midway point. There are two notable changes. First, the cigar is burning much slower than the first third. Second, the sweeter flavors are quickly trailing off. It’s still dominated by earthiness, but given the lack of sweetness, it seems much earthier. The fresh mud flavor is more intense, there are some wet leaves adding a seasonal fall-like flavor and some toastiness. While the creaminess is gone from the initial smoke, it shows up a bit on the finish, joined by some more earthiness and a touch of black pepper. I keep waiting for the black pepper to get more intense, but it never seems to get much further than the starting line. As such, it’s about an hour-and-a-half of lots of earthiness. Retrohaling produces an acorn flavor, more earthiness and some of those wet leaves. Altogether, the profile is medium-full in flavor, medium-plus in body and medium in strength. As is the case with most cigars of this size, construction is excellent. Smoke production is massive. The cigar seems comfortable being puffed every 45 seconds, with me waiting four minutes in between puffs, and everything in between. There are massive inch-long chunks of ash that fall into my ashtray. 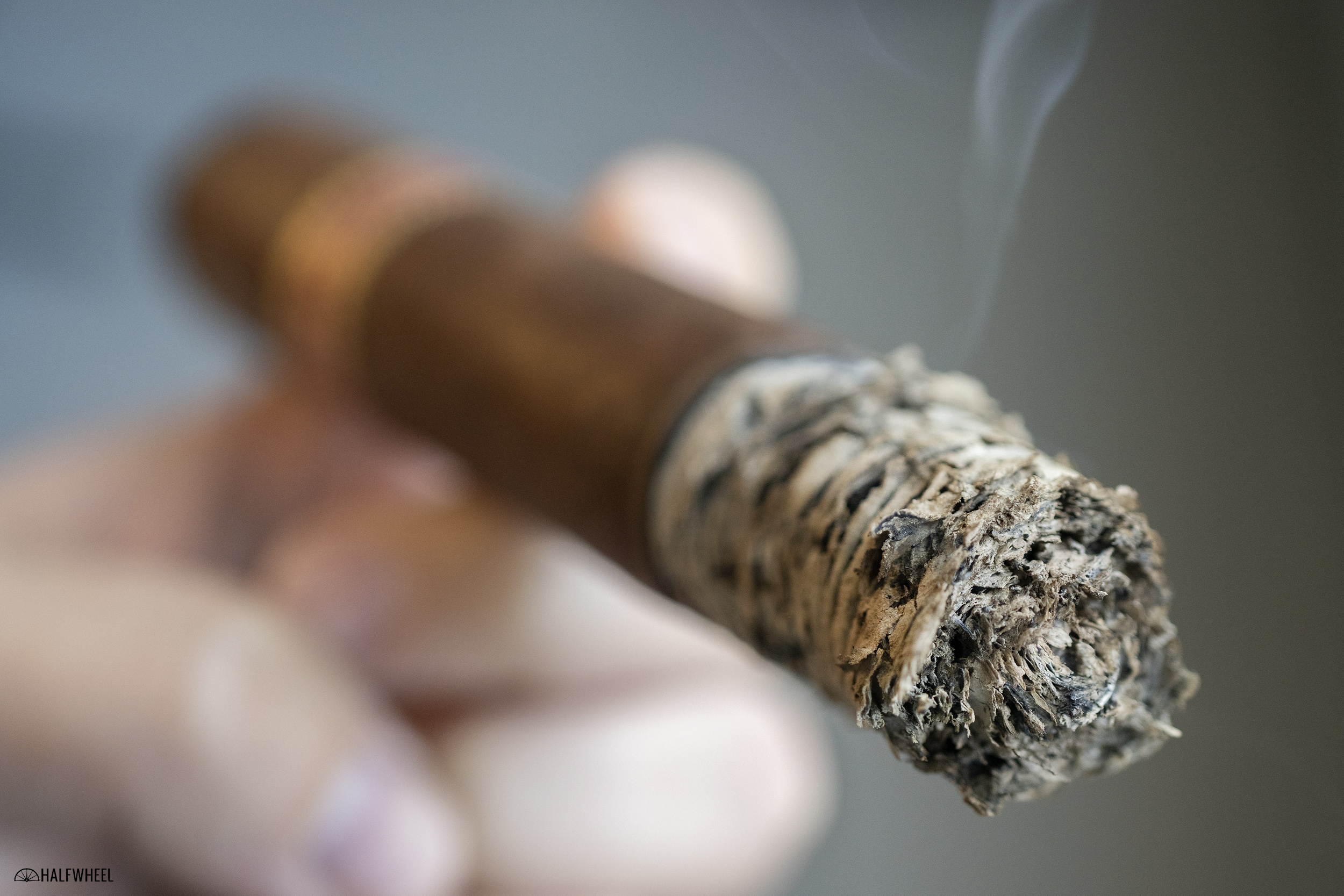 For the first inch of the final third, which is right around three inches remaining overall, I’m bored. The profile hasn’t changed much and I’ve had enough earthiness for the week, let alone the day. But as the cigar nears the two-inch mark, things are changing. There’s a mustard flavor that brings some edge, as well as sunflower seeds and white pepper. Those do well to help break up the moronity of earthiness. That being said, if I had to describe the final third in a vacuum, it’s earthiness. The finish is dominated by bread flavors, though there’s some creaminess and sweetness underneath. Retrohaling produces a lot of nuttiness, which is a welcome change to the profile. On one sample, it’s more of a rye whiskey flavor, complete with a bit of pepper to help produce a burn. The finish of the retrohale has acorns, nuttiness and some burnt popcorn. Even a minute after retrohaling it seems like the finish is building, getting richer and richer. That being said, the profile is still medium-full at best, medium in body and medium in strength. 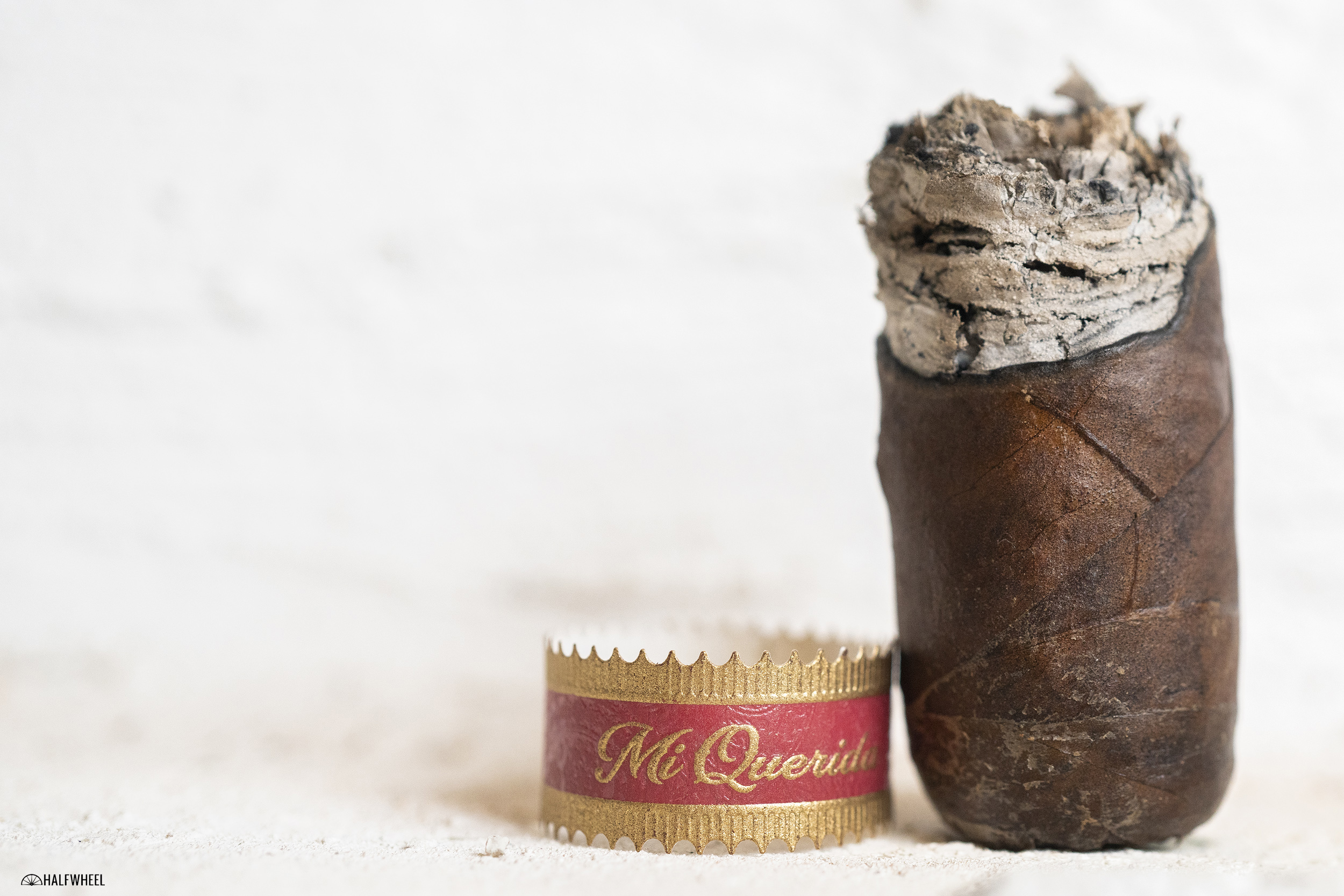 I’ve mentioned this when reviewing the 9 x 47 vitola that is known as an A—and I think that the sentiment applies here. Anytime I’m smoking a cigar this lengthy, the question for me is whether the one cigar offers an advantage over two shorter cigars. The answer here is pretty much no. While I do think that this provided a slightly richer experience for the flavors that it does have, it lacks the dynamic profile I’ve found in other Mi Querida Triqui Tracas. I sort of thought this would be a great cigar to smoke while watching an afternoon's worth of college football, but then I found myself bored by the cigar and overwhelmed by the commitment. The one advantage the 764 does provide is the price, at roughly $3.20 per hour, it makes it perhaps the best value in the Triqui Traca line under a weird metric.